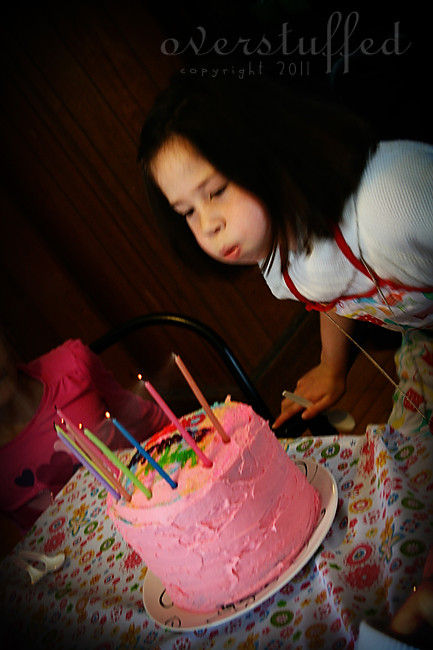 Anyway…Chloe has been wanting to do a doll tea party ever since she got her American Girl doll, so that’s what she did.  Alas, I forgot to take pictures of the invitations before I handed them out (probably because, as usual, I procrastinated them until the very last second), but they were really cute.  Trust me.

We went with kind of a cupcake-ish theme, so the favors were made to look like cupcakes, sort of.  Chloe really, really wanted to give the girls an outfit for their dolls, so I made each doll a jacket, scarf and hat.  The hat is like the cupcake (do you see it, or was I delusional in thinking these actually looked like cupcakes?), and inside the box are the jacket and scarf, as well as some lip gloss, a notebook and (of course) some bendy bandz. 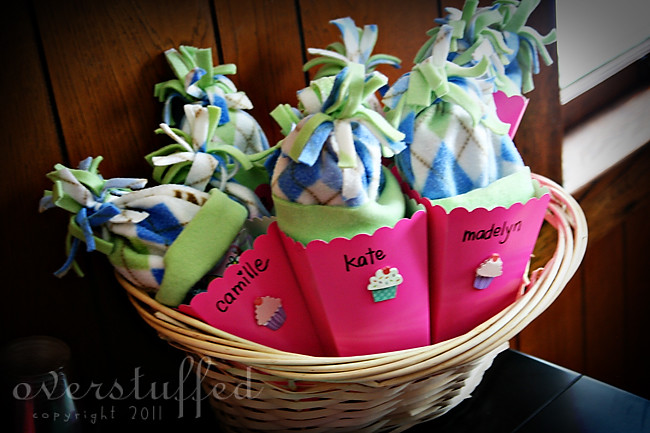 I’ll have to take some pictures of my girls’ dolls wearing their ensembles and post them later…I can’t believe I haven’t done that yet!

The cake was really tall.  Just for fun.  You’ll notice there are no candles on it.  I bought some, and I must have thrown them away with the grocery bags when I got them home, because I couldn’t find them anywhere.  Thank goodness for my friend Mary Fran who is prepared for anything, because she had way cuter candles for the cake anyway and saved the day by bringing them. 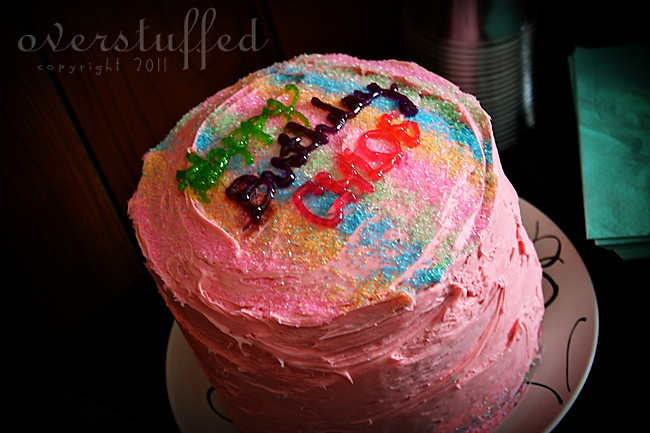 We started the party by taking pictures of each girl and her doll.  I quickly edited them and printed them out while Joel supervised cupcake frosting in the kitchen.  These are the pictures of my girls and their dolls: 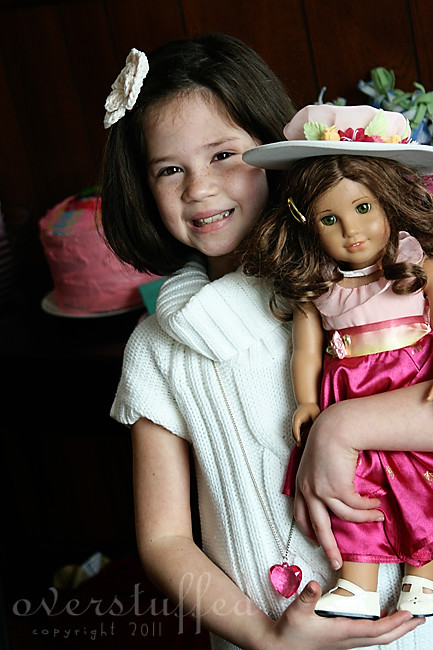 The Birthday Girl and Rebecca 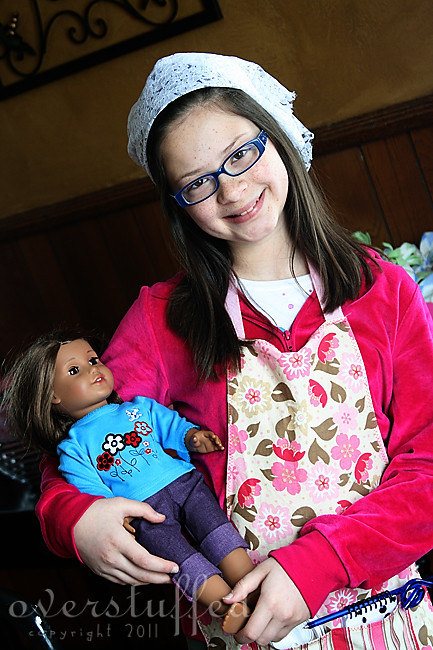 Bria and her doll, Bri Bri (hers is a look-alike, so of course she named her after herself). 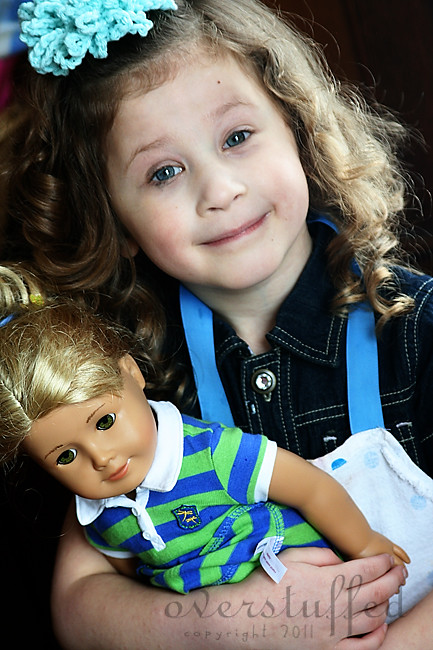 So, like I said, the girls were all in the kitchen frosting some cupcakes while I dealt with photos.  They had a lot of fun doing that, and I was pretty impressed with their creativity, too! 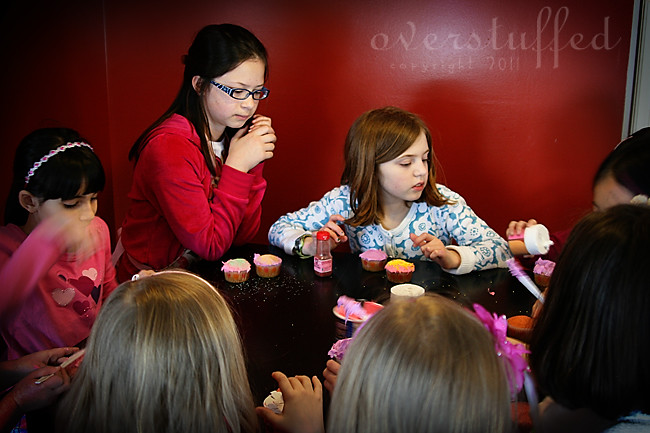 After the cupcakes were finished, we moved into the dining room, where they had a blast scrapbooking the pictures of themselves and their dolls.  Seriously, if you want an activity that they don’t get sick of quickly, try it sometime.  They lasted over a half hour, which is like a miracle at any birthday party I’ve ever put on! 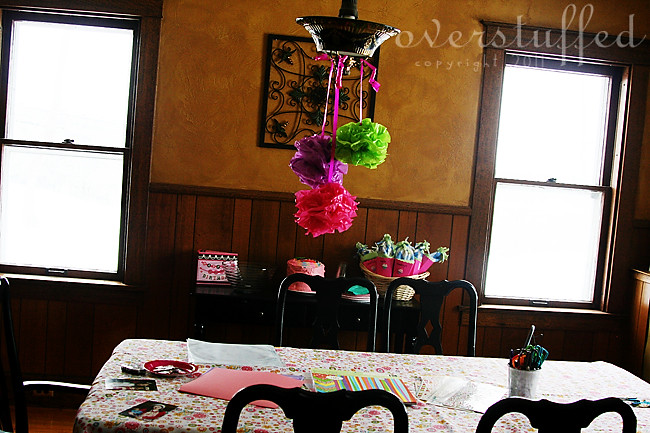 The “tablecloth” is just a piece of fabric I had in my stash, and the colors worked well with the party.  Here’s a closer look at the tissue paper balls I made to hang over the table. 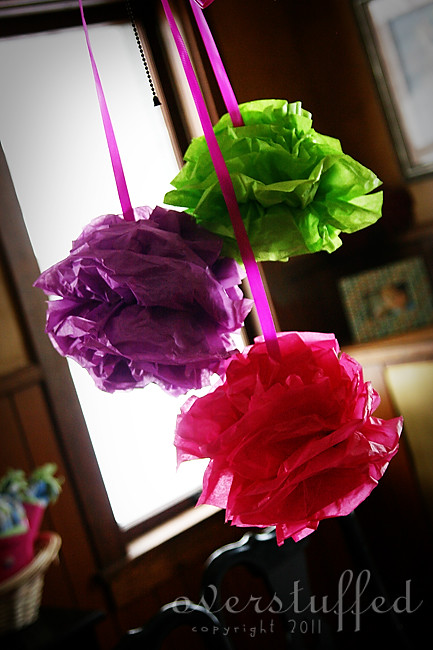 After scrapbooking, we played a balloon game (which I don’t have pictures of) in which they each took turns trying to gather as many balloons as possible while also holding their doll.  They had one minute to do it, and it was hilarious.  At the end, Joel asked if he could have a turn to see if he could beat the winner, who had managed to hold 9 balloons plus her doll.  When he asked for a doll to borrow, he got ELEVEN of them, and good sport that he is, managed to hold all 11 dolls and still gather 10 balloons on top.  You’ve never heard such squeals of delight.

Here are all the dolls (minus Chloe’s) enjoying all of the festivities.  I was totally shocked that all but one girl actually owned an American Girl doll.  Chloe assured me that this was the case, but I didn’t believe her until they all walked in my front door.  And the one girl that didn’t have a doll?  Her mom told me that she has never had a doll because she prefers to play with dragons and trucks.  Hence, the teddy bear. 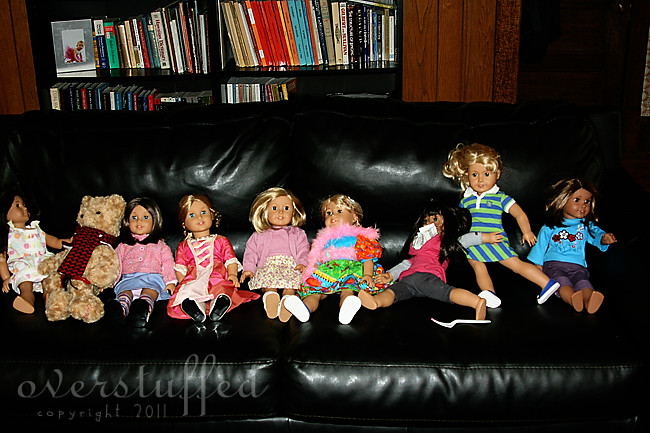 Chloe with her cake (now bedecked with super cute candles).  I just love this girl…isn’t she adorable? 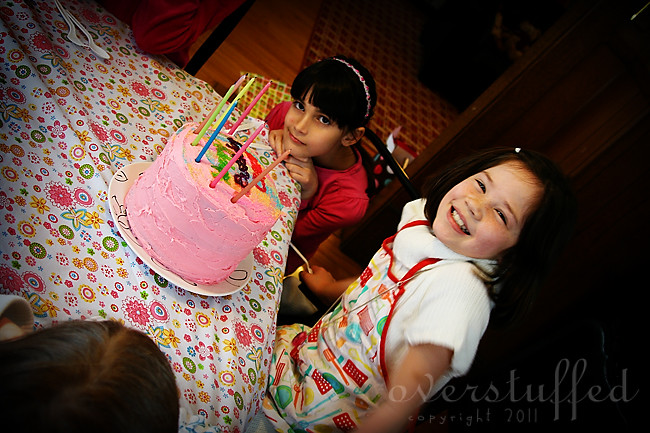 Chloe opening her gifts with Rebecca at her side. 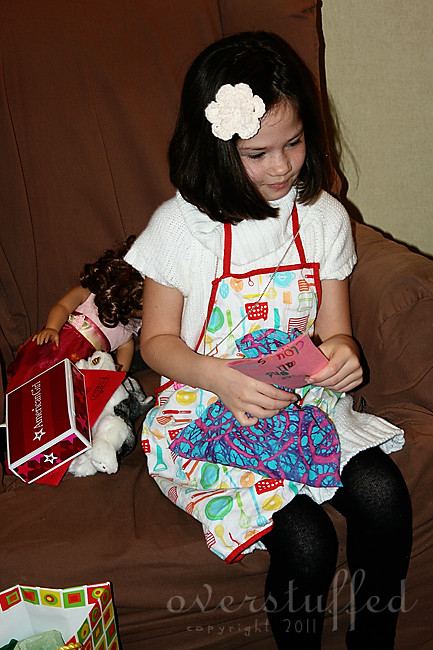 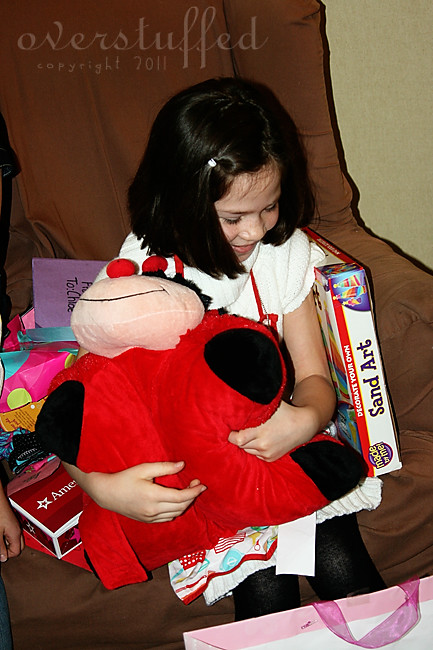 Oh dear, she got a Pillow Pet.  I was trying to avoid that, but oh, well!  She loves it!

This time I didn’t have to make up games on the fly at all, thanks to the scrapbooking  being such a hit.  And they just played with their dolls at the end.  It was a successful party, if a bit exhausting (and I’m talking about the three days of straight sewing…even though I’d had the fabric for over a month!).

Anything for my girl, though.

Darling theme 🙂 Those girls are as cute as their dolls all lined up, and yes, they DO look like cupcakes!

How many layers IS that birthday cake! It looks great with the colored sugars and the super tall candles! Will you be the photographer at Eva's party so I can do a scrapbooking event, too? I love the photo of all the dolls on the couch, though the one whose legs are splayed looks kinda uncomfortable. And who doesn't love Chloe! She's such a doll herself!

Totally love the theme. My girls have been wanting those dolls forever, so I can just imagine how much of a hit it was.

Ainsley has that same pillow pet 🙂 I was getting them for easter. Then realized Easter wasn't until the very end of April. Oops. Anyway the kids found the box. Tore it open. And well… I get to come up with another idea for easter.

ps. I thought pillow pets were so weird but they kept asking. I thought for sure they would play with them once. But they play/lay on them everyday. whew.

You are an amazing birthday mom… Want to hear my confession? I've never thrown a party for my kids. We do family gatherings. And that's it. This looks so cute though… I'm almost convinced I should try it.

You are a great mom! I love all of that girliness! My nieces are soooo into those AMerican Girl dolls.

Wow! Lucky girl indeed! All of the details are so beautiful. Such a girly extravaganza!

Looks like a wonderful party! You are the ultimate party mama and it looks like everyone had a great time.

We're into that whole AG doll thing around here too. My girls don't want to go to Disneyland, they want to go to the AG Doll Store instead. WOOT! They'll be getting that wish this year!

Oh what fun! I want to go to a party like that! It is too cute. And the favors do look like cupcakes. I never would have thought of scrapbooking as an activity. I may have to try it. You are so very clever, and such a great mother!

What a fun party! I'm so glad you survived all the prep! I want to see those pictures of the doll clothes you made! (don't forget!)

And the cupcakes look very much like some cupcakes that I've been anxious to make for awhile now. cookiemadness.net/2010/08/grasshopper-pie-cupcakes/comment-page-1/#comment-50020

The cake is beautiful! You did a great job on the the hats. I'm impressed. Would you be willing to share how you made the tissue balls? (I've been asked to make a few decorations for a spring party and these would be a great addition)

You are amazing! I love the hats and the tissue balls and the cake 🙂 Your girls look so happy.

The perfect girls party! And Chloe looks so happy!

Super cute! What a fun party. Loved your decorations…and that cake!

So, just curious…why were you avoiding pillow pets? I don't know much about them.

Good job! I can't believe they all had American Girl dolls. I guess I need remedial Mother-of-daughters training.

I love the tall birthday cake and your scrapbook idea. What a great party. My daughters would have had a blast!
And, I am completely confused by the pillow-pet phenomenon as well. 🙂

Oh my gosh!! Such a cute party!! And yes. That girl is stinkin adorable!

You *are* the awesomest birthday party mom ever! I love your ideas, and I bet the girls do, too. Happy (belated) birthday, Chloe!