Home » On being the Mom » A safe haven

I have seen “Monster’s, Inc” 1,492 times. Give or take a few hundred. Seems this movie is always the favorite when my kids are around age 2. Bria called it “corporated” and watched it multiple times a day when I was dying on the couch pregnant with Chloe. Chloe called it “monsters” and saw it quite a bit, too, but since I was not pregnant I tried to limit her to once per day. Sophia calls it “int” and has been on her kick for months now. She even finally wore out the video tape we had when Bria was tiny and I had to go buy the DVD.

Sophia is funny when she watches it. That very first scene–the one where you see the child sleeping in a dark room and then the monster sneaks in to harvest his screams–scares Sophia to death. Interestingly enough, what frightens her is the anticipation of something scary. The shadows on the walls, the darkness, the music. Once she sees the monster’s eyes, she’s fine and starts to laugh because she knows what happens next. During the dark part, she either puts her blanket on her head and stealthily peeks out every few seconds or else she runs to my arms and actually dares to watch the whole thing, as long as I am holding her.

If there has to be a movie for me to see thousands of times, I’m glad it’s this one. I actually really like it a lot. Besides its cleverness, I think it has taught me a little bit about being a parent. I love the scene where Waternoose needs Sully to demonstrate his scaring prowess, and when he finally does, he doesn’t realize that Boo is right there. Boo is suddenly terrified of the big blue monster that she had previously trusted implicitly. Consequently, she finds solace in the arms of Mr. Waternoose, who seems to her to be the next safe adult around.

The other day, I lost patience with Sophie, and I hurt her feelings. She wouldn’t have anything to do with me for a while after that and was crying for Daddy, the next safe adult in her world. I thought back to that scene in the movie and I realized that I literally do become a monster in the eyes of my children when I yell at my kids. It is definitely one of my biggest weaknesses as a parent, and I’m constantly working on it. Yes, I can blame PMS and I can blame low blood sugar, two very real occurrences in my life, but can I really? Shouldn’t I be able to learn how to stay calm? For whatever it’s worth, I am trying.

Later that night, after we had kissed and made-up, Sophie wanted to sleep with me. Which was fine, because Joel was out of town, and I always let her then. When we got into bed there was a scary shadow on the ceiling because of the way my super-bright alarm clock was sitting. Sophie looked at it for a while, and then told me it scared her, and put her blanket right on her head, just like she does when she’s watching the movie. Just when I thought she had fallen asleep, she would peek her eyes out to see if the shadow was still there, and then quickly hide again. I finally realized I could probably just move the alarm clock so it wasn’t casting any shadows and I happened to move it right when she was stealing another glance at the ceiling. Instead of just going away, the shadow looked like it was growing across the top of the room and it really scared her. She rolled over and grabbed onto me and buried her head into the pillow.

Eventually, she worked up the confidence to look up, and was relieved to find the shadow gone. Then she cuddled up to me and fell asleep. Safe in her mother’s arms. 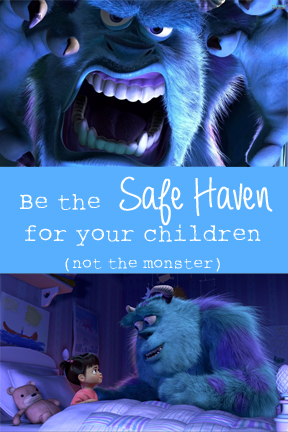 General Conference Cinnamon rolls
Next Post: What every woman should have in her purse
(Especially if that woman is me!)

Wow! Great analogy. Awesome insight. You are a fabulous mother.

This brought back a lot of memories–first of my kids watching the movie (until someone stepped on and cracked the well-loved DVD)–and then of moments of their fear. What a great epiphany.

I also love this show and all of my kids do too even today. It is a movie the whole family enjoys and you are right it does have so much about being a parent.

I am ashamed to admit that I have never seen this movie in it’s entirety.

What a great compare Lara. I think I am that pms monster sometimes. But I always give the kids a heads up when I feel it. They are older though.

What a sweet, tender story.

I have a yelling problem too. And I also have no patience. Great combo huh?!

I have seen that look in my children’s eyes more than once. Amen to your resolutions!

I’m not being sarcastic here: This is a really important lesson to learn while your kids are little. Learning how to manage your inner monster can mean the difference between surviving your kids’ teen years and not. And by the time you’re in the middle of it all, it’s really tough to get a handle on it. Well done, you.

a) alarm clocks are very scary, she is correct.
b) I agree, although I think sometimes our kids need to see us flip out… maybe just in a more appropriate way — to know we’re human and they do things that REALLY drives us insane. Maybe I should say it’s good to show them our emotions, but not so good to breathe fire on them. Scorched kids are good for no one.

Well you aren’t the only one who can turn into a monster sometimes. I hate it when I’ve done that to my kids- there is almost always immediate regret. I learned about 9 years ago from my Aunt that it is ok to apologize to kids when you lose your temper. It takes a lot of practice to get to the point that you don’t yell, and in the meantime an apology is perfectly appropriate. It feel like a mountain somedays, or maybe its a volcano(for me at least). But its doable. Great goal Lara, keep it up.

I used to be a BIG yeller. My oldest son has autism and does not deal with yelling well at all…whether it’s directed at him or at someone else. I have worked really hard at trying to stay calm. Unfortunately I still break every now and then and yell, usually it’s when I’m very tired or frustrated. I need to learn how to step back when I’m feeling like that.

Yea, I’ve been a growly mom lately, too. I’m going to have to go and watch that movie!
:~D

I really struggle with this. I justify by saying, well, at least I don’t starve them, hit them, ignore them, etc. But yelling is no good either. And it’s a hard habit to break. Good luck, and know that there’s at least one other mom out there with the same goal!

Yelling is definitely something I’m working on not doing. It’s one of my weaknesses, and I can clearly see my effectiveness increase when I keep my temper in check. It’s good to read that others have to work hard not to yell, too–it’s encouraging and makes me feel like I’ll get better and better at being patient and calm! Thank you for this post!!

We all have our challenges as parents, don’t we? This was a really neat analogy. Thank you!

Interesting comparison. I think we all feel like monsters at the end of some days. But we get to start over each morning and do better.

My fav movie ( pixar) of all time. I love that movaie and totally relate to what you said about learning about parenting.

Yeah, I don’t know about how you’re going to control the PMS monster. If you figure it out, PLEASE let me know because it’s become a big hairy scary monster over here at my house and I’m looking for answers!

what a great analogy. and a great reminder to us all, that we should be aware of our interactions with our loved ones.

I’m a yeller when I’m both elated and furious—and it’s one of the biggest fears I have about my future role as parent…thanks for providing some needed perspective!

James one day used one word to describe his mom for a school assignment. That word was “mean.” That’s pretty much when I quit being a yeller. I’ve felt better ever since.

My favorite part (until I think of more) is when Randy is banished and he ends up in that trailor and the hicks are beating him with a shovel thinking he’s a gator. I know, I’m sick.

The part with Boo getting scared of Sully is hard for me to watch. I find myself conveniently “not watching” that part sometimes. Poor Boo….

And you’ll never be a Randy to your kids, or even the scary Sully part. Boo forgave him and your kids will (and do!) too. 🙂

Well said, Lara! My little Corbin is really testing me and my resolve right now! An online friend said she remembers not to be “mean” to her toddler when she keeps in mind that he might be a prophet someday, and she wants him to have sweet memories of his mother! I do try to keep in mind the things my kids will remember…

The scary thing that came to my mind when you said that, is how Boo runs to the next safest adult. What if the next seemingly safest adult is someone you don’t know? This is a good post for me to remember…I don’t want my kids to ever run to a stranger cuz they’re scared of me.

Lara,
Our first semester at Union Square was your last (I think).

I’ve been clicking over from Holly Casabar’s blog every so often, and I just read back a few posts and found out that you are moving to Houghton. (Right?)

Anyways, Joe served his mission in Wisconsin and spent many, many (winter) months in Houghton. He is very excited for you and wishes you lots of luck!

Congrats on the new job.
Sara Soelberg
(sarasoelberg[at]yahoo.com — if you have any Houghton questions)

Great reflection Lara. Well said. I too, get impatient and end up yelling which literally stuns them a bit, and the apology road becomes that much more longer and windier, but it’s all worth it and talking afterwards help a lot. Boy, I have a long way to go. 😉

What a great read. I totally need a reminder because I feel like I have been yelling at my kids way too much lately. Thanks for posting this.

What a totally sweet story (but I DO think PMS and low blood sugar is a perfectly good excuse, one your girls will totally understand one day).

Thanks so much for the blog entry! It helps make every other mother (me included) out there know we aren’t the only ones losing patience with our children. That was a great analogy to Monsters, Inc. too!

If only I could learn to forgive as quickly as a child!