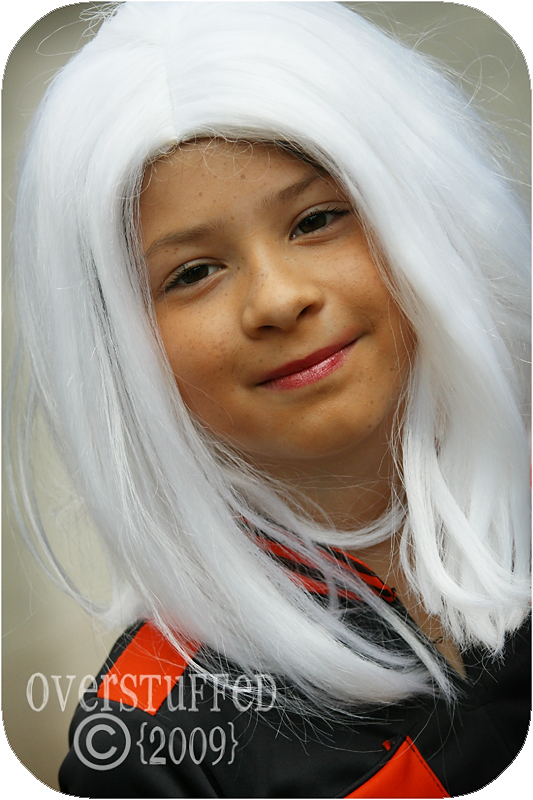 So all Bria has wanted to be this Halloween is Ginormica. Monsters vs. Aliens has been her favorite movie ever since we saw it in the theaters this past spring.  What with the big move and all, I just had a hard time with the whole Halloween costume prep (which is why I’m so glad the other two girls chose easy costumes), that I didn’t really give myself enough time to figure out a Ginormica costume.

The first issue was her white hair.  I looked at every store that sold costumes or wigs in our area and never found anything that would work.  There were a few platinum blond wigs, but they were always really long, and I don’t fancy myself a hairdresser one bit and knew it would look awful if I tried to cut it myself.

I figured the jumpsuit would be fairly easy, just some black sweats with orange duct tape for the details, but it was the Monday before Halloween and I had still done nothing with that, either.

Joel called me from work that day and said he’d found a costume online and shouldn’t we order it for her?

Online.  Duh!  Why didn’t I think of that?  I think I just assumed that there would be no retail Ginormica costume, because most people had no idea who Bria was talking about when she’d tell them what her Halloween costume would be. 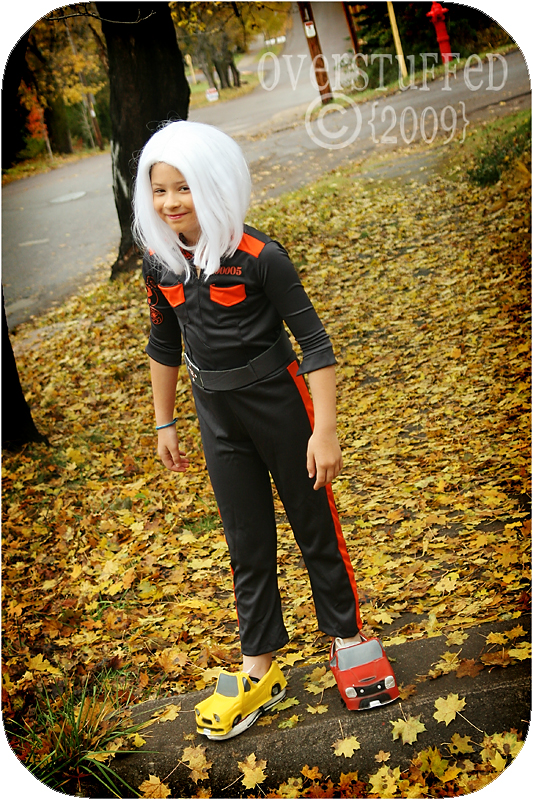 The only problem was that they only had small and medium sizes left in stock. We went with medium, knowing it would probably be too short for my tall girl. Thankfully, it still fit everywhere else, despite the shortness. I loved the shoe covers that looked like cars to portray how big Ginormica really is, and plus it’s a scene in the movie when she uses cars as roller skates.

Bria was so excited about the costume, it was worth the extra shipping we had to pay to get it here on time.  And it was really fun to hear all of the other kids start to recognize her while we were Trick-or-Treating.  It was slightly embarrassing for Bria, but I think she secretly enjoyed having such a unique costume. 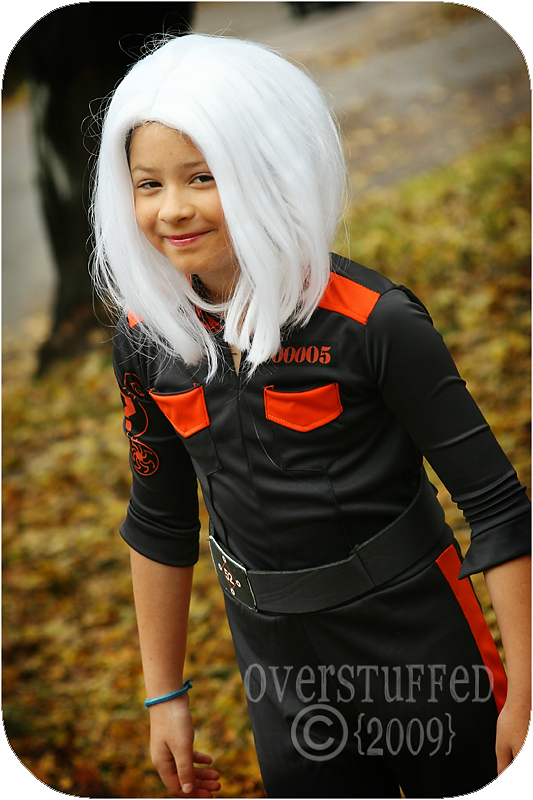 She has been telling me for a month that we would have to put a lot of make-up on her to cover up her freckles, because Ginormica’s skin is totally white and smooth. Every time I put any sort of make-up on this kid, I realize what a knock-out she is, and it scares me.

But it’s okay for Halloween.

I LOVE the car shoes!

All your kids are knock-outs. (Be afraid. Be very afraid.)

NEver actually seen the movie, but i have seen the previews several times and know exactly who she is!
I think the short length adds to the costume. Makes her look taller. After all, she is Ginormica. And the shoes are great!

She looks fabulous! I love her costume!

And tell her that I think freckles are awesome.

Did she feel different as a blond? She is a cutie!

It is a relief to know that some of that grown up appearance Bria is now sporting is from make-up. They grow up so fast, and I am right there with you in the fear department with three little girls. They are all knock outs, even more so with freckles!

That's great that you were able to get it for her! The car shoes are fabulous. 🙂

I thought the costume turned out just darling. She (and all your children) have such beautiful, glowing faces.

My Bria! I LOVE her beautiful eyes! She is my sweetie!

When you first mentioned that she wanted to be Ginormica I had no idea who or what you were talking about. I have never seen that show. After seeing her in costume I think she made a good choice. Definately Unique and out of the ordinary and thats the best part about dressing up for Halloween. She's darling!

I'm with Heidi. Have you considered convent school for your kids?

And you are too clever for words! Very cute costume.

Sometimes I think standing out for good stuff is good for our kids, helps them learn to accept attention like that.
Smart of Joel. 🙂

Thank heavens for the Internet Rescue Squad. Saves so much time and effort. Great costume!

She is a knock-out and I looooove her freckles. They really make her.

Love the cars as shoes! That movie was "okay" but I liked it because Hugh Laurie voiced one of the characters. 😉 🙂

Oh, great costume! We enjoyed that movie, too.

She looks great as Ginormica!