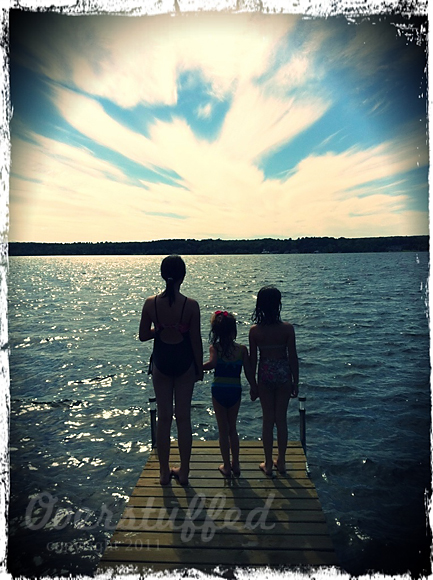 This picture has almost nothing to do with this post. Other than that these are my three daughters and I am trying to be a better mother to them. Also, aren’t those clouds awesome?

First things first: I know you’re all dying to know how our bedtime scheduling went.

We introduced it on Monday Night at Family Home Evening, and the girls were totally fine with it. Tuesday it went without a hitch. Wednesday we decided to watch a movie as a family and we didn’t get around to it until a lot later than we should have (I can’t remember why) and the movie wasn’t over until nearly midnight. Oh well, it’s summer, no biggie. Thursday night we had some friends sleep over while their parents went on a little getaway. It was difficult to keep these children off the walls, much less make them stick to a bedtime schedule. So, there went that. Friday night was our turn to babysit for the babysitting co-op that we do (by the way, this is such a great way to get a weekly date and not have to pay a sitter) and so that was a bust. Saturday we were at some friends’ house (where the above picture was taken) and we swam at their private beach, roasted hot dogs over a campfire and talked and played until way past bedtime. And then we went to yet another friend’s house to watch a movie out on their back lawn–we got there just in time for the closing credits, and of course some socializing. Tonight is Sunday. And we tried. That’s all I can say.

I’m giving myself a pass because it is summer. But we’re hitting it harder this week, that’s for sure.

At the same Family Home Evening, we introduced the Family Rule Book. It took nearly two hours, but together we came up with about 30 family rules and their attached consequences. At first, the girls seemed to think that things like “not spitting on people” and “don’t slam doors” were the most important rules to worry about, but we eventually got them to come up with things like “be kind to your sisters” and “quickly obey” and a bunch more really good ones.

I think that so far it is making a huge difference in our household. Partly because they helped to make the rules and the consequences that are attached to them (many of them are more harsh than I would have thought up if I were doing this myself)(and I’m a mean mommy)(my kids tell me so all the time), so they know exactly what to expect. The only thing I’m seeing an increase in is tattling. Which I never know how to deal with, but if you have suggestions, I’ll certainly try anything.

This next week the focus will be on Consistent Consequences. Basically, consistently and unemotionally administering the consequences that are already written in the book. Really, I look at it as extra practice with the Family Rule Book, since that’s what we’ve been doing this week already. The hard part is to drop what I’m doing and just do what needs to be done. And staying unemotional sometimes is hard, but I’m getting better at that, and I promise it works.

Here’s to another week of becoming the mother I want to be.

Previous Post: « American Girls
Next Post: What Language Is
(And What It Isn’t and What It Could Be)

It is always so hard to get back in the bedtime routine at the end of summer. I admit it is super hard for me to buckle down too.

I love that your family made a family rule book with consequences that they came up with. That is just brilliant – there should be no arguing if the rules are broken 😀

You sound like you are an awesome mom – as we know it is the hardest job on earth!

Lara, what an awesome photo! WOW, I love it!

The family rule book sounds like a great idea! Keep us posted!

That photo is amazing. And good job on bedtime. But you are right. It is summer, so not really a big deal. I am still impressed with you. Good luck with the tattling. I can't wait to come up with rules when my children are old enough to really understand and comprehend.

You're such an incredible photographer, Lara. Wow. And how touching is that photo?

I think a family rule book sounds like such a great idea. Maybe I'll rob from you. 😉

We have to focus on consequences a lot because we need structure. Personally, I find it a Godsend. *hug* Wishing you lots of love and peace.

Some great ideas there! We are also struggling with decent bedtimes as evidenced by the time of this post. I like the Family Rule Book idea. May have to steal that one! We did create new passwords on the computers today so that the kids have to be logged on by a parent in order to play. Bits of progress I suppose. Good luck!

Great photo and I think your week sounds fun even if it did include a few late nights.

THIRTY RULES?
That's serious parenting.
We have institued the fight step and the family bank.
And not trying to kill P this week.
That is all I can do. 🙂

My kidlets have year round school, so they never really had the chance to enjoy late nights …. your description of summer nights sounds so fun and makes me long for those times for my own kidlets.

Hopefully you'll share more of how the Family Rule Book works – I like the idea of unemotional consequences. Hopefully it takes the focus off of you and onto the behavior.

I love the idea of the rule book and consequences. Just might have to work one into our next FHE. As far as tattle telling…yikes! I didn't see that one coming when the kids are so young. I just ignore them or say something like, "What do you want me to do about it?". They are usually stumped and walk away saying " I told on you!". Not sure if it's working though. Maybe something that will ALWAYS happen, like kids picking their noses.

My all time favorite for tattling came from a fellow baseball mom.

If her kids wanted to tattle, they had to sing it. Tattling soon ended

Actually for you musical family, that might not be such a harsh thing

That photo looks dreamy…what a great book to have in place. We made up 5 house rules because that is about all of the attention span my kids had. Consistency really is everything in discipline and it does not come easy.