When Ralph Vaughan Williams wrotethe cantata back in 1936, he had no idea the profound impact it would have on the soprano soloist in a small town in Upper Michigan some 75 years later.

I have known I would be the soloist for this work for a really long time.  I started practicing months ago, though I didn’t hit it super hard until January.  The thing about the soprano solo parts in this one is that they look easy, but are in reality very difficult.  At least, that’s what I found.  There isn’t really much of a melody to latch on to, the key changes are frequent and often done without accompaniment (can I just tell you how terrifying that is for a soprano who doesn’t have perfect pitch?), the rhythm is all easy when you practice alone, but putting it together with the choir and orchestra proved that the rhythm was just pretending to be easy–in reality it was a beast.

All that to say that I had a surprisingly difficult time with the piece, and I basically had a nervous breakdown over it.

Three weeks before the performance, I was busy doing OPERAtion Imagination! (bringing opera into the schools) and had put some of my Dona Nobis Pacem practice on hold while I worked on that.  Once it was over, I planned on dedicating my life to Ralph Vaughan Williams, except I got really sick instead.

And that was the beginning of the breakdown.  I sucked on zinc, downed tea and Airborne, rested as much as humanly possible, and still things weren’t back to 100% by the time concert week rolled around.

On Friday night, I lost it psychologically.  It might have been the difficulty of the piece, the fact that my voice still wasn’t working properly the day before the performance, or that the baritone sitting next to me has had an illustrious career which includes singing at the Met and being best buddies with Placido Domingo.  Whatever it was, my confidence was shot, and when I got up to sing a particularly difficult (for me) passage, it just didn’t happen.

People.  I couldn’t sing the passage in the dress rehearsal.  And I knew that it wasn’t because I couldn’t, it was because I was freaking out.  Falling apart inside.  Wondering what on earth I was doing there.

I went home and lost it.  I cried and cried.  The Maestro worked with me on the parts where I was struggling, and I could do them perfectly at home (well, I could if you don’t count the tears).  Joel also gave me a priesthood blessing, and I worked on feeling at peace.

Which is pretty interesting, considering that my role in the entire cantata was to plead for peace.  The only lyrics I ever sang were

(Lamb of God, who takes away the sins of the world, grant us peace.)

On Saturday morning, during the final rehearsal before the performance, I mulled over those lyrics and how they fit into the work as a whole quite a bit.  As I sat listening to the choir and the orchestra and the brilliant baritone, I found a new appreciation for the music.  It was no longer just about war to me.  It was about my own war with myself and my confidence.  I was no longer pleading to the Lord for peace on earth and freedom from death, I was pleading for peace within myself.

By the end of the rehearsal, I had found that peace.

Later that night, I was ready to perform, and I stepped onstage with peace in my heart.

Was the performance perfect?  No.  But I knew I had done what I came to do, and I was thankful to have had such a profound experience–through the very music I was performing–to help me come closer to Christ.

And hopefully, in the process, to help others come closer to Him as well. 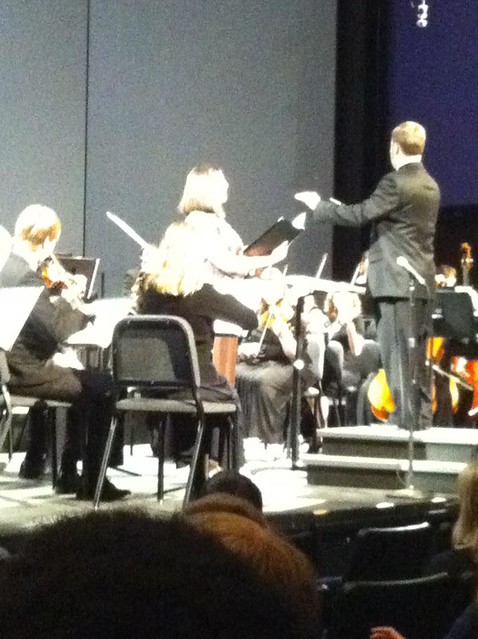 (Above picture taken with my friend’s phone, stolen from Facebook by me.)

(Another friend, who is a pro photog and covered the event, sent me this photo.)(Also, one of my favorite things about this particular picture is that Joel is sitting right behind my left shoulder.  He prepared the orchestra, but the choir director conducted the performance and Joel played trumpet.  I loved his quiet encouragement every time I turned around and sat down.  I’ve sung under his baton a million times, but it was nice to perform together in the ensemble this time.) 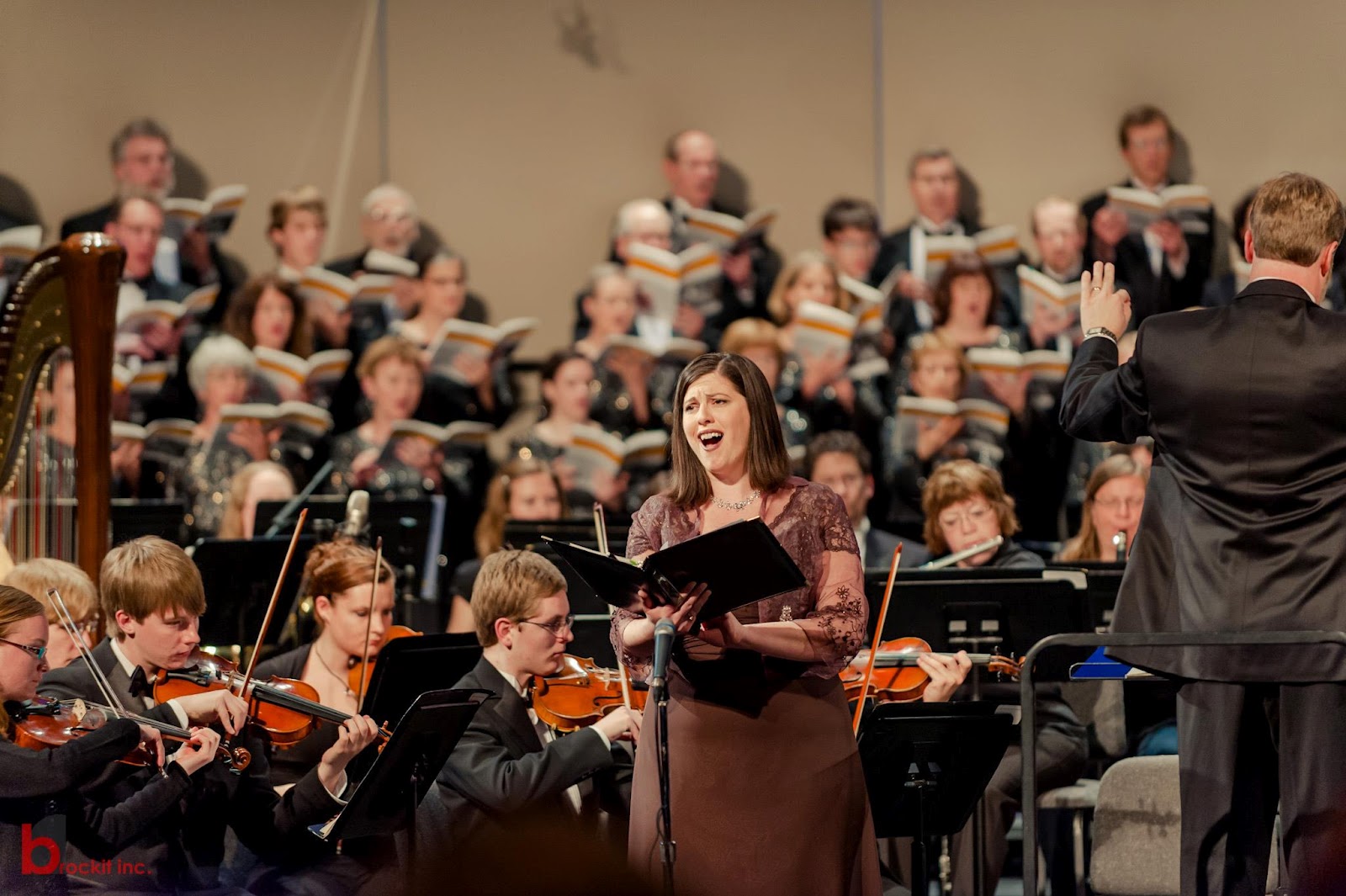 I don't think you look dorky at all. I think you look absolutely beautiful. And I would bet that you sang just as beautifully. I would also bet money that there were a ton of people who were wishing they were you… able to sing like you do, able to look like you do, etc. etc. I'm glad you were able to find the peace you needed within yourself in order to perform. It hurts me to know that you of all people, would have such a hard time and end up having a break down prior to the performance. You are amazing. Period. You need to know that about you to. AMAZING!!! *Hugs*

You know, I've never seen you in this light before. (And yes, you DO look beautiful in the dress!) You always seem so confident, so sure, and I've always seen you with this phenomenal talent that just burst free of you as natural as breathing. And you know what? To know that you struggle with knowing who you are, what you're worth, and if you can do it? It makes me love you all the more. It makes me appreciate your talent all the more because not only do you work and practice at it, you fight against your own demons to share it and enhance the lives of others. And don't you even begin to doubt that you're NOT doing that–because even though I've never had the pleasure of seeing you in person, I KNOW your voice blesses the lives of others. I know because when I hear someone's beautiful voice raised in song, I close my eyes and sigh deep within myself. It's a GIFT. A gift that eases all of the turbulence in my heart and lets me keep breathing. You have that gift. And knowing that you fight to share it only makes it all the sweeter to me that you DO share it.

Thank you. I know you pay a price to share yourself like that. I promise you, it means so much more than you'll ever know.

You look FABULOUS and I can only imagine the impact of your performance! Your friend's screenshot of you singing is really a beautiful photograph!

I love your dress – you look wonderful!

I'm sure you were fabulous! What a wonderful gift you have to be able to sing from your heart and release emotions through song and actually have it sound good! I sing terribly but I sing anyway. How wonderful it would be to have that form of personal expression at my disposal in such a powerful way. Yours is a rare talent and true gift but only because of the hard work you have put into cultivating that talent. Congratulations!

While waiting for your blog to load I had the some running through my head based in your post at the bucket, its cool that you actually did blog about singing, since that's what was running through my mind. 🙂 ps you look great in that dress!

I'm so glad you were able to perform and that it went well but sorry you went through all that beforehand – your dress is BEAUTIFUL by the way.

You DON'T look dorky! One day, I hope you'll post a vlog of you singing. Or at least the audio part of it

Now think about what you wouldn't have learned if you didn't struggle with that piece. What a blessing in disguise for you. I wish with all my heart I could hear you sing it. Especially with your new found appreciation and understanding. I love that you shared this. I cannot describe how this touched me, but it did.
P.s. You are gorgeous!!! Love the dress on you.

Oh, Lara, this post made me cry. I so understand that feeling of being totally overwhelmed, of being asked to overcome fear and just not being sure what the outcome will be. Your experience is inspiring to me. I'm trying to overcome my own fears and weaknesses about performing. Confronting the keys again has been brings up all kinds of mental yuckiness. Thanks for keeping it real.