Home » kids say the darnedest things » Our Epic Vacation: Day 4
At the close of Day 3, we found ourselves in a cute little cabin in Custer State Park, South Dakota.  I certainly appreciated the sort-of mattress I got to sleep on.  It was ever so much better than rocks and dirt, despite my air mattress.  Plus, we didn’t even have to set up a tent! 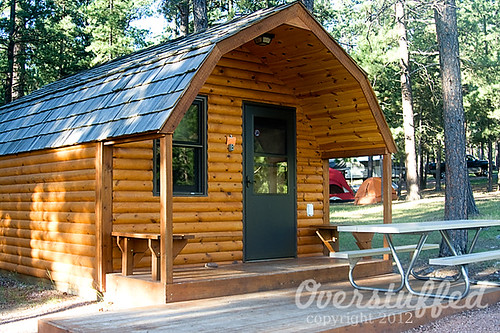 Of course, breaking camp was still a pretty big ordeal the morning of Day 4.  Packing the car up every morning was always an exciting prospect.  All of our backpacks and sleeping bags and American Girl Dolls (sigh) and books and stuff.  I would hardly call our camping trip “roughing it.”  And, also–did I tell you that the Maestro insisted on bringing his golf clubs ALL THE WAY ACROSS THE COUNTRY?

I was tickled to find a little comic on the back of our atlas (which I would post here, except the cover got destroyed on the epic vacation and it has since been trashed) depicting a man packing up the back of the minivan for vacation.  He has fit his golf clubs in, but left two or three suitcases out, and the wife is fuming mad.  Apparently Joel is not the first man in the history of the world to want to take his golf clubs on a road trip.

So, anyway, those golf clubs and all of our other crap made packing up fun.  End digression.

We drove out of Custer and headed west to Wyoming, where things began to finally look more Western.  More like our beloved Utah, but not quite. 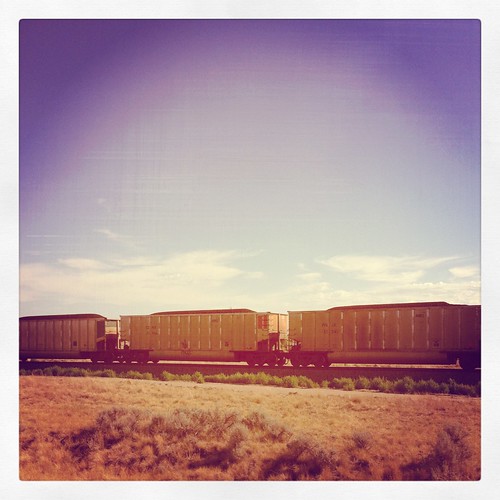 We made a small little detour to go get the girls’ passports stamped at Devil’s Tower.  And see it, of course.  It was really cool to see in real life, even if we didn’t actually have any close encounters with the third kind.  How very disappointing. 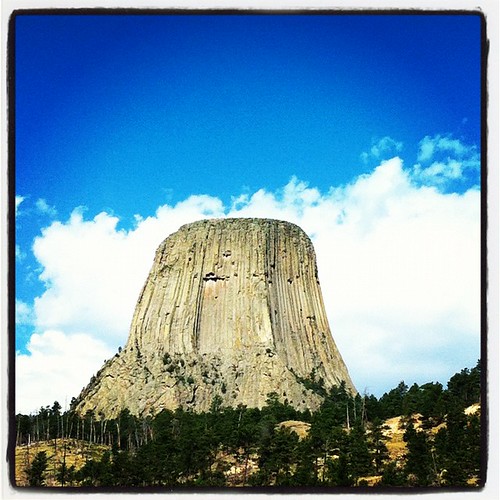 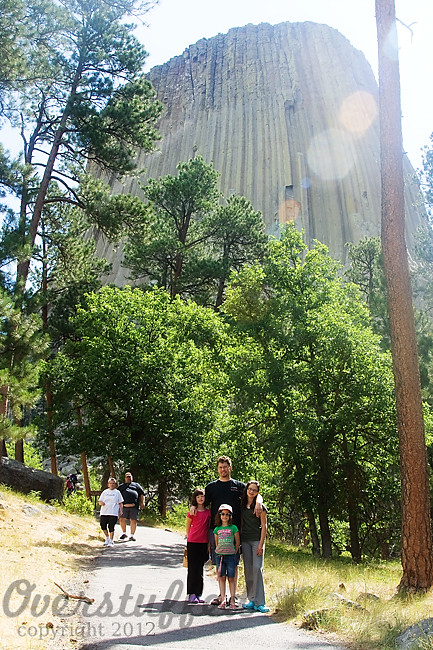 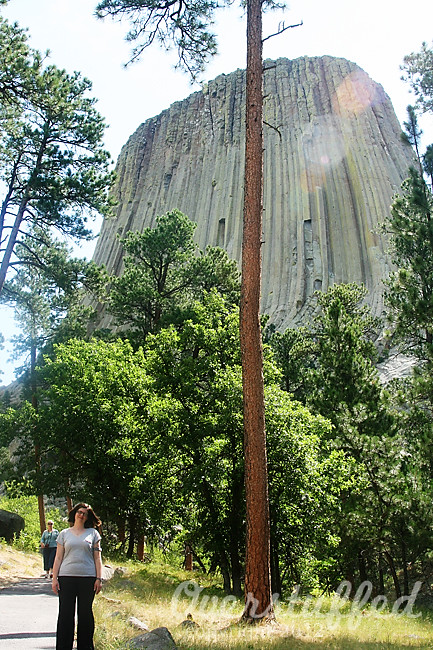 It was actually really fascinating to be there, and we spent a lot more time than originally planned. All in the name of education, though, right?

And taking FOREVER to get to our intended destination: Yellowstone.

I will admit that we didn’t realize just how slow going it is to drive through Wyoming and all of the twisty-turny mountain roads that lead to Cody and the East Entrance of Yellowstone.  Plus we stayed longer than we should at lunch (a Hardee’s in middle-of-nowhere Wyoming) and we stopped along the way to see a few different landmarks. 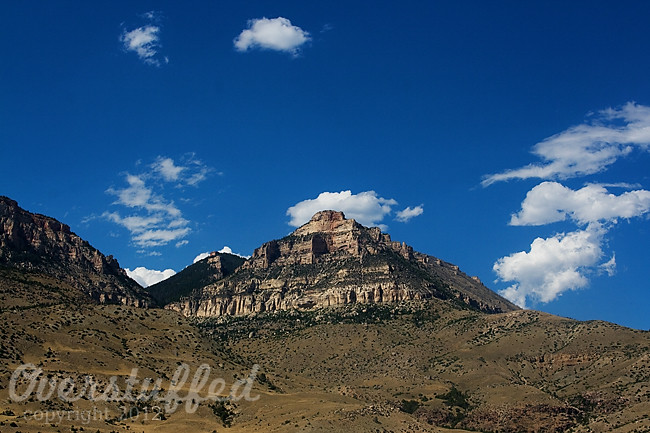 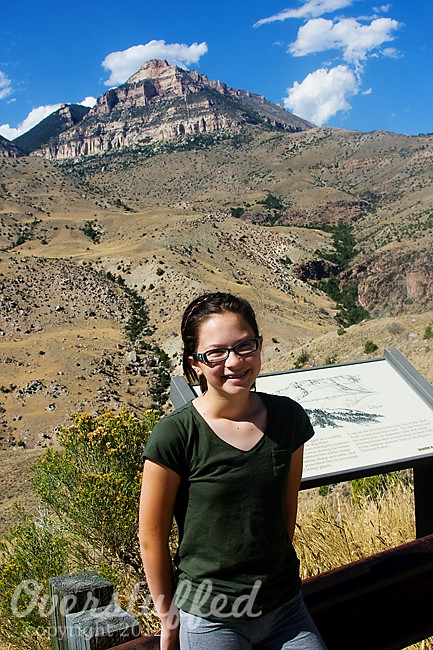 I think Chloe and Sophia were too busy watching McKenna (the new American Girl movie) at this point to bother getting out and looking at a rock.

After a quick pit-stop in Cody for our dinner/breakfast food supply, we finally arrived in Yellowstone–about 5 hours later than we had planned.  I won’t lie, either.  We were not in very good moods at this point. 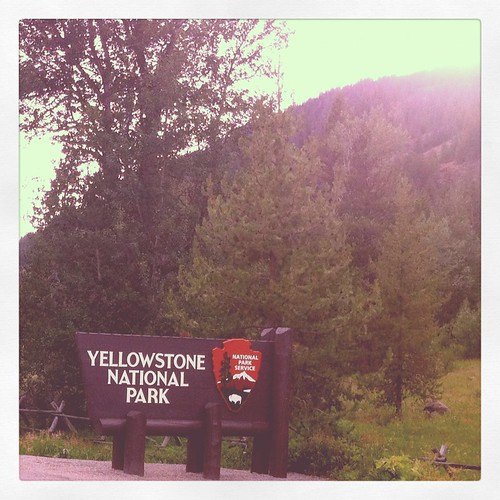 A lone bison met us near the entrance, and I think he was a different variety of buffalo than the ones we had seen the night before in Custer.  Either way, I certainly wouldn’t want any run-ins with him! 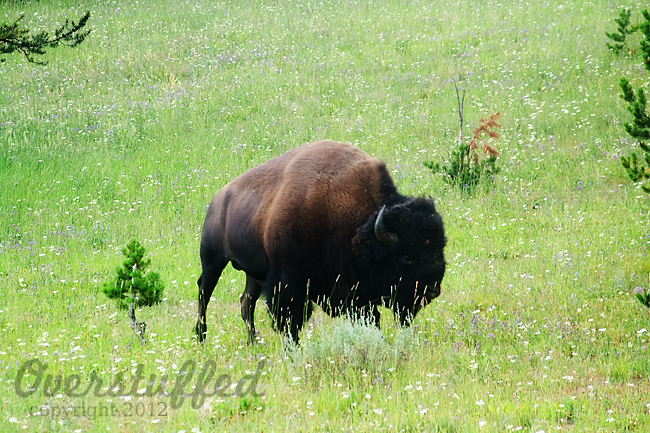 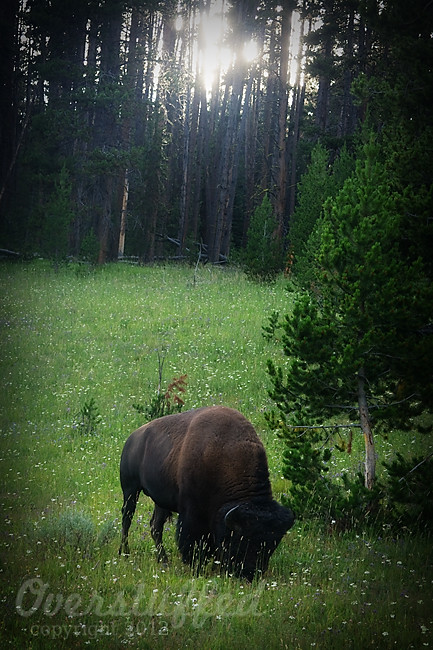 And who knew how huge Yellowstone is?  I mean, I knew.  I just didn’t know.  We drove past Yellowstone Lake (beautiful) and about 45 minutes after we entered the park, we finally arrived at our campsite.  We quickly set up our tent and went to find somewhere to eat near Old Faithful.

Too bad for us, everything was already closed once we drove that distance.  But, on our way there, the cars were all stopped and we got to see some elk watering themselves down in a ravine just off the road. So that was cool. 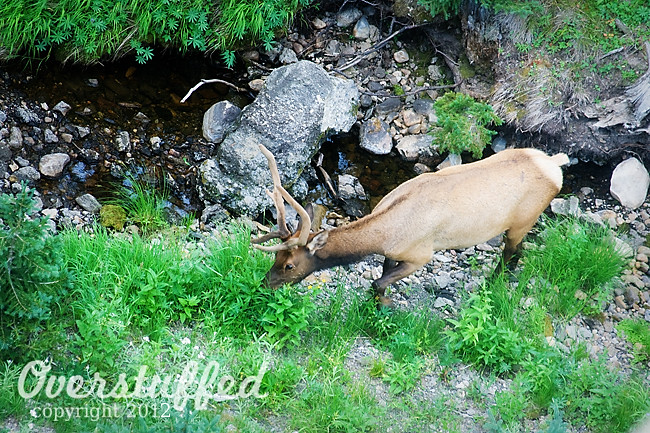 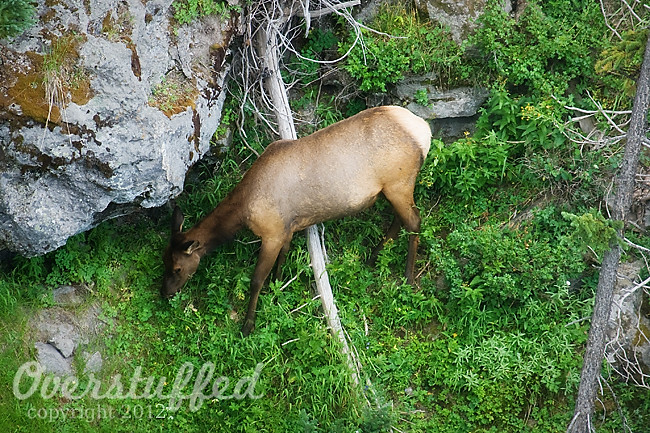 We also got to watch Old Faithful erupt in the dark, and that was cool, too.  After that, we drove back to our campsite and crashed.  (Don’t worry, our tummies weren’t totally empty–we snacked on gorilla bars for dinner.)(Yes, I meant to say gorilla–that’s what Sophia calls them and it has kind of caught on with the rest of us.)

The Book of Jer3miah
Next Post: To My Six-Year-Olds

Gotta love the wild wild west! Glad you had fun. 🙂