Home » parenting » The Secret Life of Teens on Instagram

Last weekend I dropped my 16-year-old daughter off at an event. I needed to talk to one of the other moms, so I waited around with Bria for a little while until that mom arrived. While we waited, Bria and her friends were talking about normal teenager stuff: school, music, and what someone had posted on their “finsta.”

My ears perked up. Finsta? This was a word I hadn’t heard before.

I’ve heard of Instagram, of course, and like any good parent I follow my children’s accounts and have their passwords so I can check them myself. But what on earth was a finsta?

So, like any good parent, I butted into my daughter’s conversation and asked about it. Her friends were totally candid with me and told me that “finsta” is an abbreviation for “fake Instagram.” And most teenagers and their friends have one.

After that enlightening conversation I went home and asked my 13-year-old daughter if she knew what a finsta was—and whether she had one herself.

I was relieved to find out that she didn’t have one, but she told me that she did know what it was (though most kids in the middle school set call them spam accounts instead) and that many of her friends had them. Then she offered to show me. 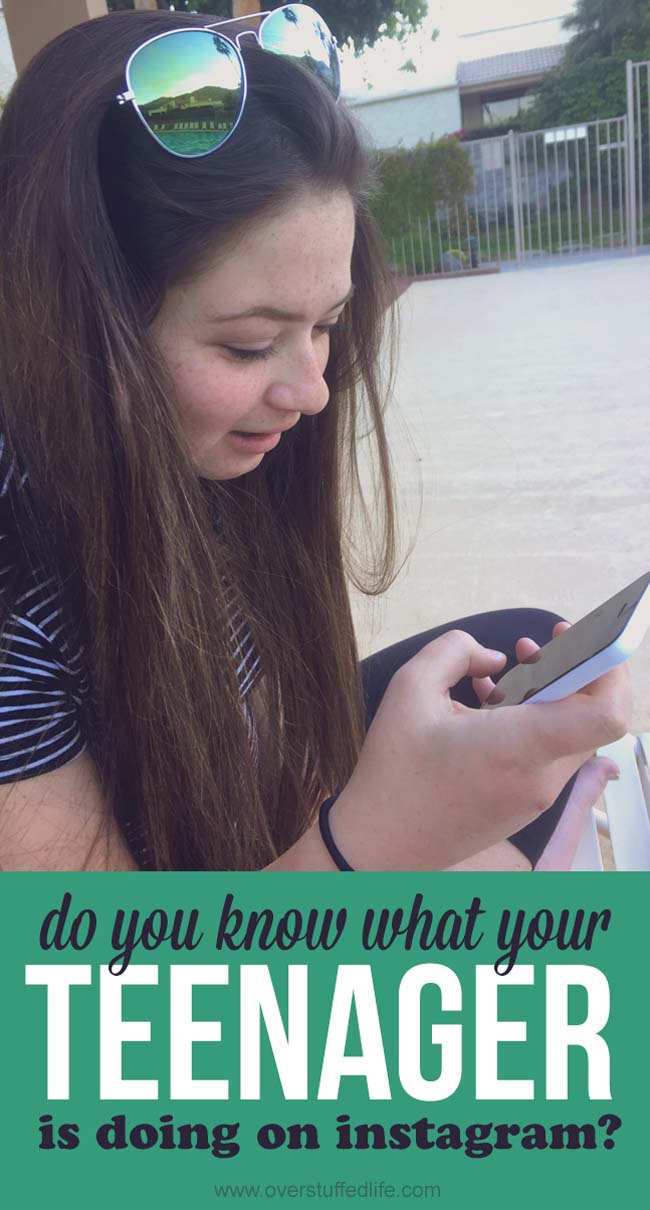 I now know more about Finsta and Rinsta and Spam Instagram than I ever wanted to know—except, as the mother of teens it is vital that I know it. And you should know it, too.

What parents need to know about fake Instagram accounts

60% of teens have fake internet accounts.

A 2016 National Cyber Security Alliance study found that 60% of teens surveyed had secret social media accounts, while only 28% of their parents suspected that their children had fake accounts. After the conversation I had with my daughter’s friends, I realized that the chance was very likely that my own kids had secret Instagram accounts they weren’t telling me about. Before that conversation the thought had never even crossed my mind! And I thought I was totally on top of the social media my teens were using—and there is a lot more than Instagram to monitor!

For my two teenage daughters, Instagram is definitely their social media of choice. They use Snapchat and my older daughter also has Facebook, but if they are on social media it’s going to be Instagram most of the time.

Worried about what your kid is doing on Snapchat? Read this: The Ultimate Guide to Snapchat for Parents

The nature of Instagram is visual, and teenagers feel the pressure to keep their feeds beautiful and well-styled. My girls refer to gorgeous Instagram feeds as “tumblr” and rarely post on their own accounts because whatever they post has to be perfect and totally cool. A teen has a reputation to consider, after all, and social media is often a popularity contest.

Teens want a safe place on Instagram where they can feel free to post whatever they want. So they create fake accounts that they keep private where only a select few friends can follow them. I asked my daughters to show me some of their friends’ fake accounts and, for the most part, they are innocuous. Silly photos, bad selfies, and funny memes,—”real” photos that aren’t styled and perfect. (Which makes you start to wonder, which account is actually the fake one?)

Yes and no. When I first realized what they were, I was alarmed. After talking to my daughters and actually looking at many of these types of accounts, I am much less alarmed.

While I looked through the fake accounts, I didn’t see anything of major concern (drugs, alcohol, illegal activity, or provocative/risqué photos). I did see a few things of minor concern such as some vulgar language and a girl flipping the camera off.

I’m sure there are teens out there that are posting material on their finsta that is of major concern, so that is why all parents should be concerned about these types of accounts.

Another concern with fake instagram accounts is that nothing on the internet is ever really secret. Teens are often lulled into a sense of fake security when they think a snap is going to disappear forever or that nobody knows about their finsta. It is important that they understand that anyone could screenshot and share something, they could accidentally post on their rinsta, and that people talk (remember how I found out about these accounts in the first place?). If they are posting material that they shouldn’t, it will eventually be found out by more people than they intended.

Mostly, these accounts are for fun—a way for kids to share their real selves with only their closest friends. I noticed that the majority of these accounts had 50 or fewer followers, while the same person’s rinsta (real instagram) usually had ten times that amount of followers. As long as you are aware and communicating with your child, you shouldn’t have too much cause for worry.

How can I find out if my teenager has a fake account?

1. Bring it up and ask them point blank. Even if they aren’t forthcoming, they will now be aware that you know about the popularity of finsta and spam accounts. I asked my girls if they had this type of account and they both said they didn’t. While I trusted them, I still did the second and third items on this list, just to be sure.

2. Do a search for their name on Instagram. I was surprised how many of the fake accounts that I looked at used their real name—a sign that the account was more for fun and less about concealing things from mom and dad.

Many of the middle school fake accounts had the kid’s name followed by spam, spxm, or spamm and were easy to find by searching. The high school accounts often had name + finsta, but many of them also used a nickname or some sort of private joke type of name, with or without the finsta designation. Still, they were searchable and easily found because they were connected to their real names.

Now that you can be logged into multiple accounts at once on Instagram, I require that my girls be logged in on my phone. This way I can check their accounts much more easily than I could before. Teenagers usually follow their finsta accounts with their rinsta accounts, so a simple scroll through of which accounts they are following may bring up an unknown spam account.

My girls know that they have to hand over their phones anytime I ask, and that I will read texts, check accounts, etc. If you haven’t yet set this precedent with your teen, it may be a good idea to set up a cell phone contract or at least have a conversation and lay down some new rules.

I am so glad that I overheard that funny word last weekend. It’s led to some good conversations with my daughters about internet safety and why I might be concerned if they have a fake account. I allow my kids to have social media accounts such as Instagram because I want them to learn to navigate them under my watch. I don’t want to ban them from these apps while they live under my roof and then send them off to college with no idea how to deal with the same social media their peers have likely been using since elementary school.

As parents, it’s so important for us to be educated about what’s out there. Unfortunately, social media changes by the minute and it’s not easy to keep up! Keep an open dialogue with your kids, and they’ll help you stay informed, but also keep an ear to the ground and don’t be afraid to butt in on teenage conversations.

Want more information on what your child might be up to on social media? This book looks really good: American Girls: Social Media and the Secret Lives of Teenagers

I have this book about helping our families learn to deal with social media, and recommend it: Navigating the Cyberscape 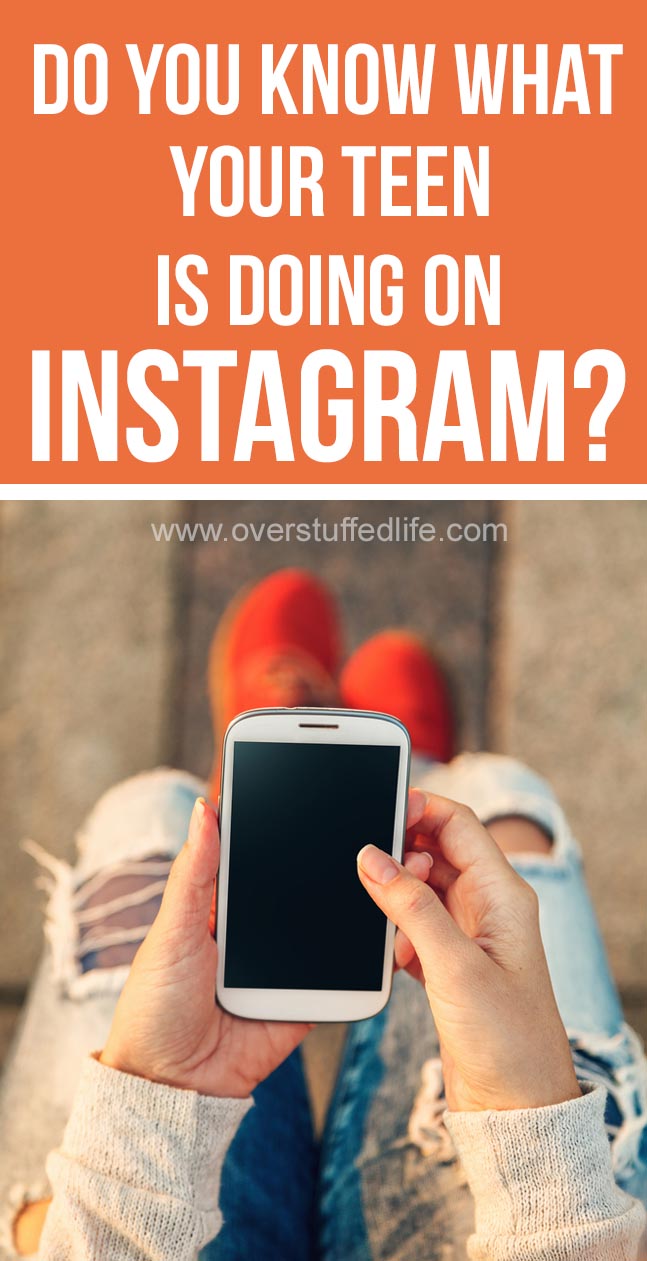