Home » social media for kids » Parents Guide To Among Us 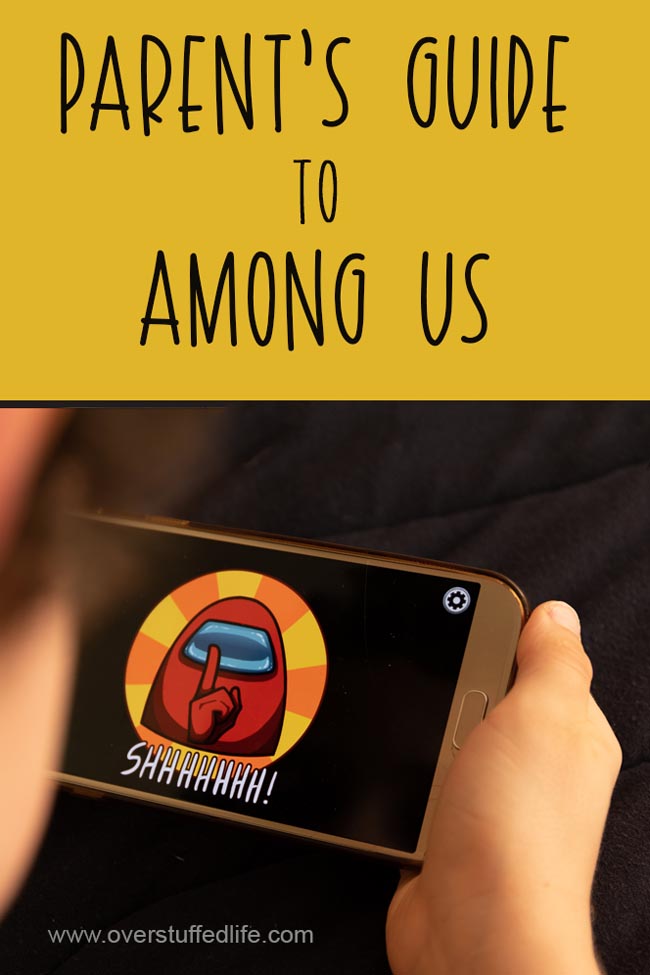 Wondering what the big deal is with your teen and the game Among Us? Here’s a rundown for parents.

Though it was initially released in 2018, Among Us boomed in popularity earlier this year. This rather simple game, available on both Steam as well as for free on the app store, quickly became a fan favorite game for players of all ages.

Many kids also got into the game with its suspenseful gameplay and fun customization features. The premise of the game is simple: up to 8 crewmates are locked in a spaceship. Crewmates must complete small tasks to repair the ship to escape. One or more of the crewmates is an ‘imposter’ and their objective is to eliminate all crewmates on the ship.

The fun of this game comes in the gameplay and conversational tactics the imposter must employ to win. If players discover a body, they can report it and it will start a meeting wherein players can discuss who the imposter is.

Additionally, players can call an emergency meeting to the same effect. During these discussions, players have open access to the chat box to type out their arguments. The real fun of the game comes in the imposter shifting blame and the crewmates defending themselves.

Once the conversation is over players will vote on a crewmate to eject from the ship, wherein that crewmate will become a ghost and hover around while finishing their tasks. The imposter also has several tools at their disposal to aid in their mission, such as vents placed around the ship that allow them to hide and quickly escape.

Additionally the imposter can sabotage systems including lights and even oxygen to help them win.

What Parents Need To Know about Among Us

The game is very stylized as all of the crewmates are simple drawings of astronauts. The crewmembers are all very cute, and there are several colors that players can pick from. The game does obviously feature themes of violence wherein the imposter must eliminate the other crewmates.

These eliminations are done by tapping a button where an animation will play of the imposter killing the crewmate. The imposter is then revealed to be a monster living in a crewmates suit, where it waits to dispatch the other members aboard the ship. Despite the cartoon graphics, these can be rather violent, and are of course meant to be surprising when they happen, so they may be scary to younger kids.

There are also certain themes that parents must be aware of, such as the imposter sabotaging the oxygen of the ship so that crewmates must fix it. If crewmates are not able to fix it in time, it is suggested that they all suffocated, leading to the imposter winning.

These themes of violence can be jarring, or even extreme to some kids, so it is important to parents to know about them.

During the pre-game lobby and during specific discussion times, players have access to a chat box wherein they can talk to the other 3-7 players. Of course, this obviously presents the risk of being exposed to foul language or other suggestive themes.

There is a setting to censor chat, which catches most inappropriate words, but there is always the risk that some words are not picked up by the filter and slip through. Parents should know that the only real way to censor chat is to monitor it, which is not always a possibility.

Most Among Us players will take the game seriously or abstain from too crude of language but when playing online with random people the risk is always there. Of course, this can also be avoided by hosting private games with friends, and not opening it up the public.

Among Us can be enjoyed by smaller groups of friends with lobbies having a minimum of four players needed. This completely removes any risk of profane chat by strangers, which is reassuring to many parents.

Among Us is free on mobile phones such as the iOS app store, but it does cost money to get on PC. PC and mobile are both compatible with one another, and players from both systems can play and talk with one another.

One of the best features of Among Us are the customization options and accessories available to the player. Players can wear hats, equip pets, and change skins or outfits. These options give players more control over what their character looks like and are really fun.

However, aside from a few hats these items cost real world money. Each pet will cost around three dollars in real money, so be wary of younger gamers trying to purchase these without permission.

While these bonuses are fun, and add some extra enjoyment to the game, they are not at all necessary to play the game. They are purely cosmetic and do not affect skill or luck whatsoever.

Surprisingly, Among Us has gained immense popularity two years after its initial release. AS gamers began discovering the game, it gained traction online and among social groups.

With its simple yet difficult premise and infinite replayability, Among Us immediately became a fan favorite game. What’s more, it is easy to pick up and play and free to own on mobile devices meaning that gamers everywhere can easily hop straight into Among Us.

Thanks to popular online influencers, the game became increasingly popular among younger gamers, and for good reason. The game is simple to understand and the graphics are appealing to younger audiences.

As a parent, there are a few things about Among Us that you should know, specifically pertaining to the violence, chat features, and in-game purchases. While the game is not rated, it is better suited for pre-teens and teenagers rather than younger children, both in terms of mechanics as well as content.

Among Us can be an incredibly fun gaming experience, but as a parent it is ultimately up to you to decide if the game is appropriate for your child. With this guide you can make an educated decision on the new gaming phenomena.