Home » photography tutorial » Catching the Light: How to Get Catchlights in Your Photos

I am a hobbyist photographer, and this post is about 7 years old. My general photography and photo editing skills have improved a lot in these last years, but the principles in this post about how to achieve catchlights in your subject’s eyes still hold true. Enjoy! 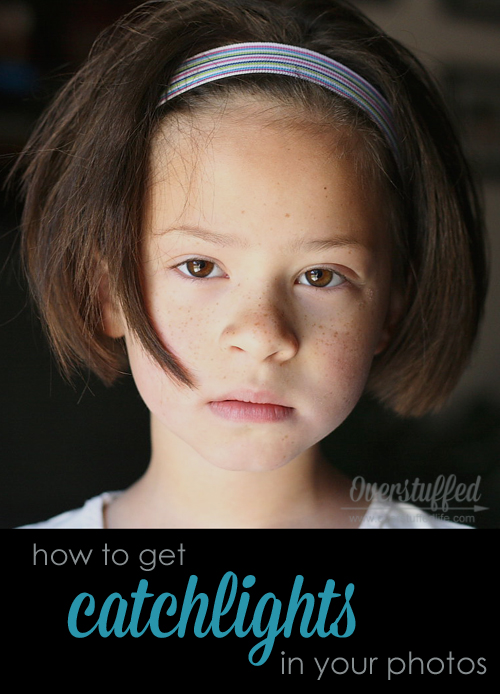 Okay, so I almost forgot that I said Thursday would be photography day, but I did remember before midnight, so all is well.

The first time I ever read anything about catchlights, (it was a layout by Cathy Zielske in the 2002 Scrapbooking Hall of Fame book entitled “Catchlights”) a whole new world of photography opened up to me. Ever since that moment I have worked to perfect it, and now it comes fairly naturally to me. 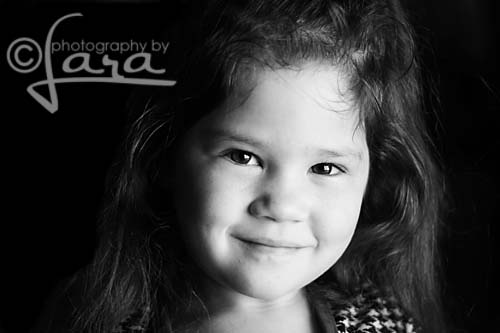 First, let’s define the word. Catchlights are the spots of light that are literally “caught” by the eye: a reflection of the light source or a reflective surface such as water or snow. Catchlights make the eyes look alive and make a significant aesthetic difference between okay and really great photography, especially when it comes to portraiture. When there are no catchlights, the eyes, and therefore the subject, look somewhat dead and uninteresting. In fact, I recently read that cinematographers edit out the catchlights of evil characters to make them seem even more horrible than they already are.

Taking pictures with a flash provides automatic catchlights, but they are generally a boring, round pinpoint of light. In contrast, the catchlights that natural light is capable of providing elicit much stronger emotion and beauty. So, again, please turn off your flashes and start experimenting with some of your other settings!

For me, getting great catchlights is as simple as paying attention to my subject’s eyes and moving them around until I get the look that I want. I often take pictures next to windows (the photo of Chloe above is taken in my living room near the sliding glass door) and get superb catchlights that way.

For catchlights in outdoor photography, the trick is to keep your subject in the shade, but turned toward the light (late afternoon sun is best), so that you get beautiful sparkly eyes, but no harsh shadows. Sometimes I even create the shade for my subject with my own shadow, as in this picture of Bria: 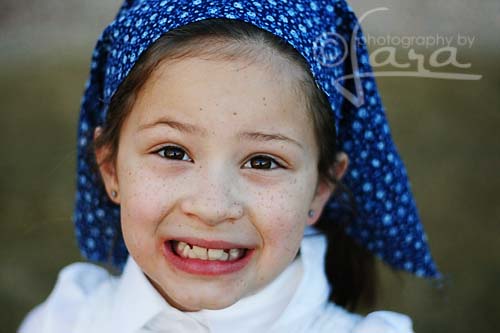 Even though I blocked most of the sun from glaring on her, her eyes were still able to pick up the reflection of the sun, providing some beautiful catchlights.

This picture of Sophia was taken while she was still in the car, but the door was open. She was therefore still in the “shade,” while her eyes still reflected the light coming in from outside. In this case, you can also see my reflection too! 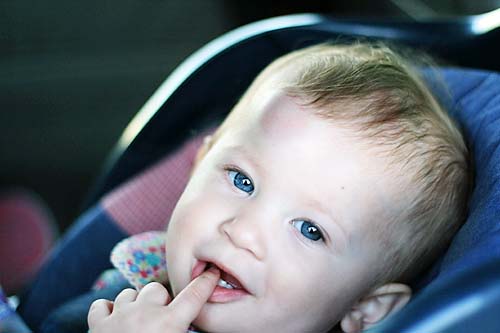 An open garage is a good place to find automatic shade while still getting good light. I like to set my backdrop up inside the garage and take pictures in there. Here is a picture of my mom that was taken in my garage. You can see the gorgeous catchlights this setup provided. 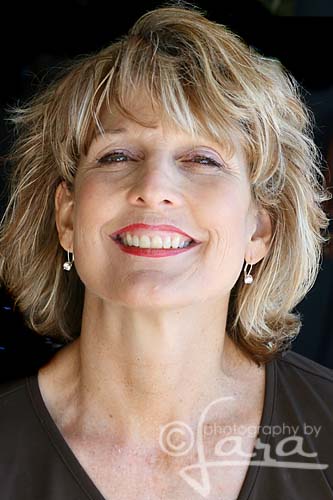 Finally, there is one caveat with catchlights, and that applies to people who wear glasses. I deal with this often with both Bria and Joel. Here is an example of how light that normally gives wonderful catchlights (in this case the garage) can affect those of us wearing specs: 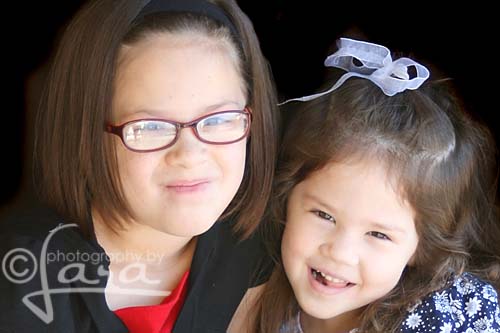 You can see that Chloe’s eyes are nice and sparkling, while you can hardly see Bria’s due to the glare from her glasses. (We won’t talk about the strange expression on her face.) The trick to avoid this problem is to position the glasses at a downward angle on the face. I generally have her lift her earpieces slightly so the lenses are facing down. It looks (and feels) funny, but only if you’re looking super close. In most photos I have taken this way you can’t even tell that the glasses are at an odd angle, and most importantly, they do not glare. Here is the best example I could find that was on my computer (I was too lazy to go through all my discs of saved pictures for better examples): 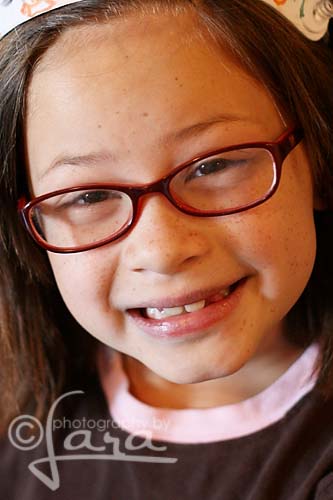 The picture was taken near a window without a flash, with the magic glasses positioning technique. I didn’t get the most wonderful of catchlights, but they are there, which is better than none at all. The other option with glasses is to take them off, but I always think it’s nice to have some with and some without, since it’s something that is part of the person’s every day life.

The farther away you are from your subject, the less catchlights matter. Also, if there are more than two or three people in a photo it is difficult to get them, mostly because you become further away from the subjects. Remember, the most important thing is to just start noticing how the light affects your subject’s eyes, and look for things that can cause catchlights. You can use a reflector, car bumpers, water, snow or the sun itself and even wearing a white shirt as a photographer can help. 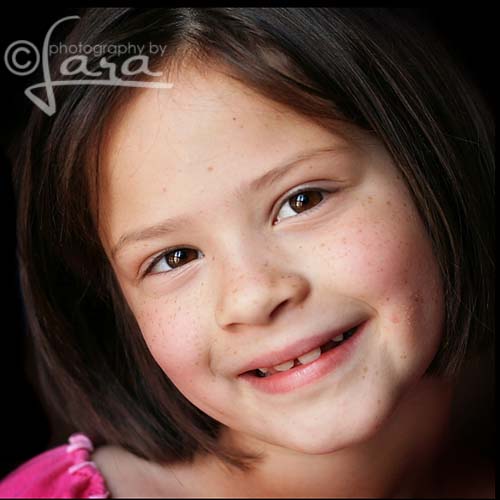 ETA: Anne-Marie mentioned that it was harder with a point and shoot to get catchlights. It shouldn’t be, except in very low light situations. Catchlights have absolutely nothing to do with the camera and everything to do with the way light hits your subject, so just start being aware of it. If you have more than one focus point to choose from on your camera (I have 9) try to focus on the eyes to make the catchlights more clear (and a better overall picture), but even the delay that comes with digital point and shoots shouldn’t cause issues with catchlights.

I LOVE the b&w of Chloe at the top and the one of Bria at the bottom! Great photos!

Your pictures are beautiful, Lara! Those catchlights are much trickier with a not so great camera, though.

The glasses thing is sooo tricky! We’ve gotten to the point, that Hank just has to take them off in pictures. Which is too bad, because I think he looks great with his glasses.

Chloe is so photogenic. What a beauty!

I enjoyed learning about catchlights. I should pull out my manual and see if my point and shoot has many options. I do have a film camera that’s pretty nice, but, well, it’s film. 🙂

Your getting good Lara! Another friend of mine also does photography. Her name is Annie Ballard and her blog is “chick-that-clicks.blogspot.com” Check it out.

Your kids are growing up and changing so much. Hope you have a Merry Christmas.
Love,
Esther

Your tutorials are great! And I’m glad I found this one. I never knew ANYthing about catchlights, but I can see that it makes a big difference between an OK picture and a really great one. Thanks so much – I will definitely have to try this.
:~D

You are soooooo lucky to have willing subjects! My kids generally throw a fit the moment I whip out the camera…