Home » crafts & sewing projects » The Making of a Valentine….or 62 Valentines.

I know, I know.  Valentine’s Day is long gone, right?

Well, it’s still February, and so I’m totally within my rights to post this.  (So there.)

It seems that round these parts, people like to make their Valentines.  February always seems to be too crazy of a month for me to pull that off, so I have never done it in the past.  But my kids wanted to do the homemade route this year, Bria especially, and I could not disappoint.  I found an awesome idea online that was totally cute, involved scrapbook paper, the computer, conversation hearts, plastic and my sewing machine.  Already you know that this was way too much for me to attempt in my stressed-out state.  But, as usual, I suffered from delusions of creative grandeur and was absolutely sure I could pull off making 62 of those suckers with grace and speed.

After the first one, I knew I would have a long 30 hours of crafting ahead of me if I chose to continue.  So, naturally,  I didn’t choose to continue.

And my friend Kirsti came to the rescue by posting this link.

And I said, “I can totally do that!”  And this time I knew it was true, cross-my-heart-and-hope-to-die.

The next day I took about a half an hour to do a quick photoshoot.  I figured these were photos that would be destroyed fairly quickly so I wasn’t going to fuss about photographic perfection.

But, it still wasn’t exactly easy.

First, I had to coax Sophia out of her favorite pink blankie. 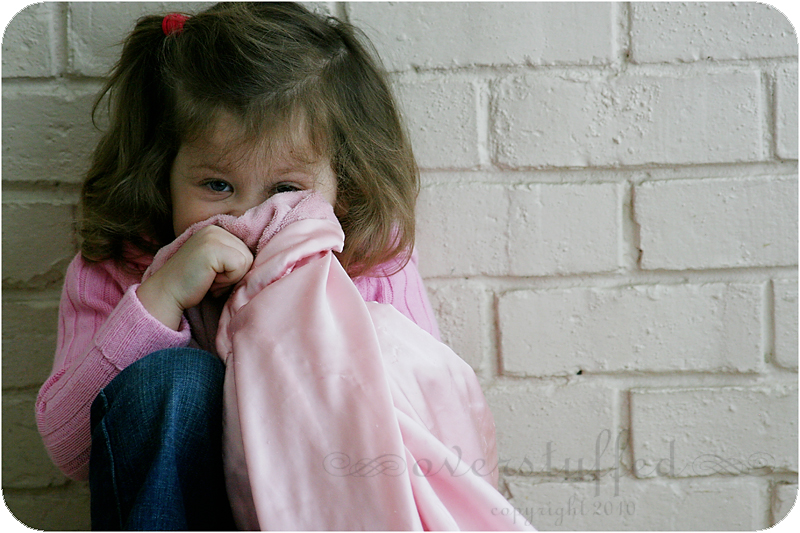 Then I had to get her into an upright position. 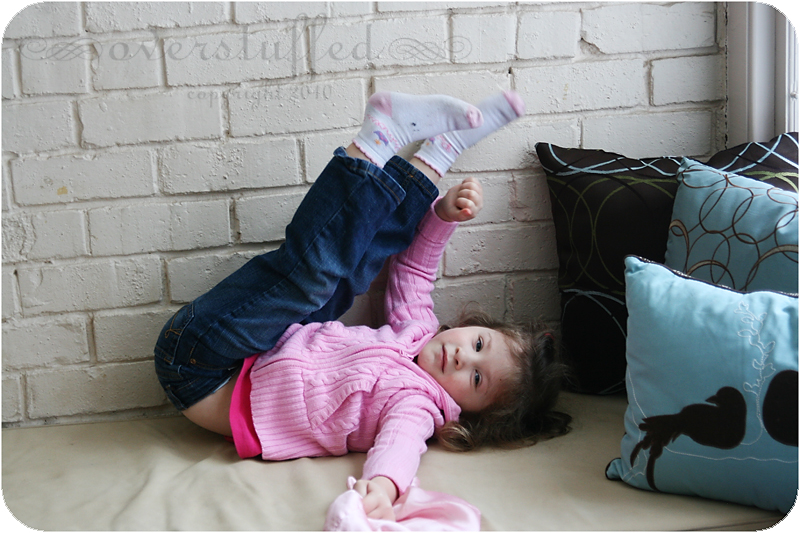 Then I had to show her how to keep her hands out of her mouth and her fist out of her face. Smiling, however, was never a problem. Thankfully. 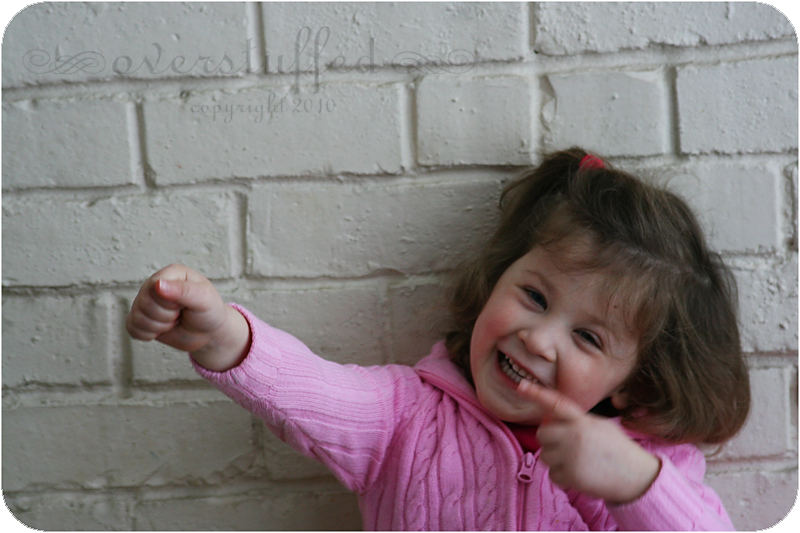 After something like 25 photos (taken by the window on a day so overcast they were still super noisy), I finally got something usable.

Bria is never a problem. Always the perfect little poser. Maybe a little too perfect. I just don’t like the cocked head and the fake-ish smile. Or the ear sticking out of her hair for that matter. (PS–Don’t you love her new glasses?) 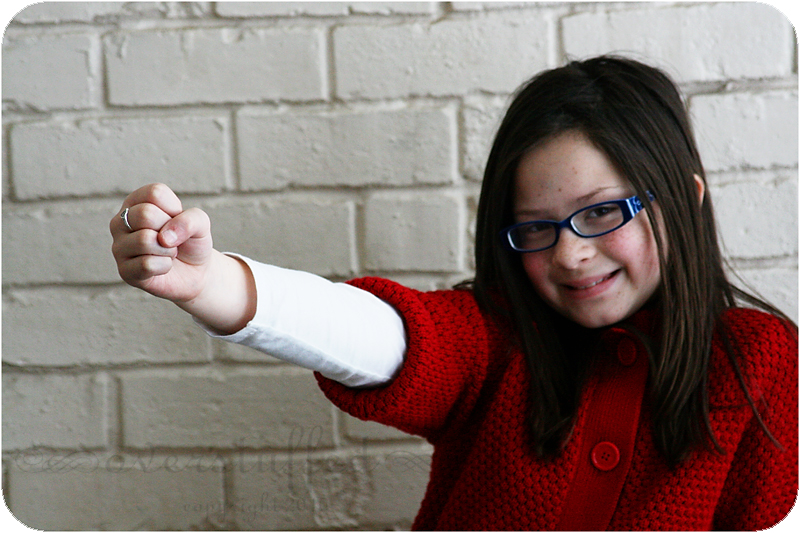 <
So after a quick fixing of the hair, coaxing the head to be more straighter (uhhh…did I really just type more straighter?) and joking with her to get her to laugh and give me a real smile, I easily got a keeper or five.

First we needed to address her apparent attention deficit disorder. 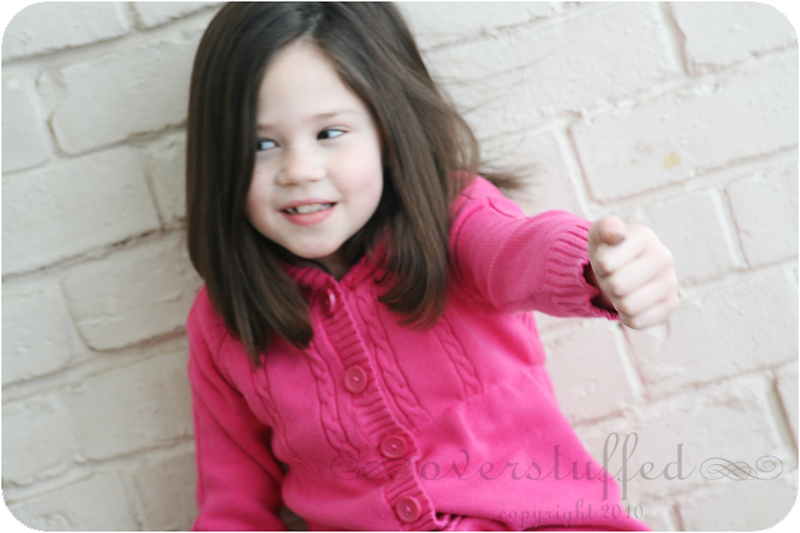 <
Then she pulled out her genius fake smile. 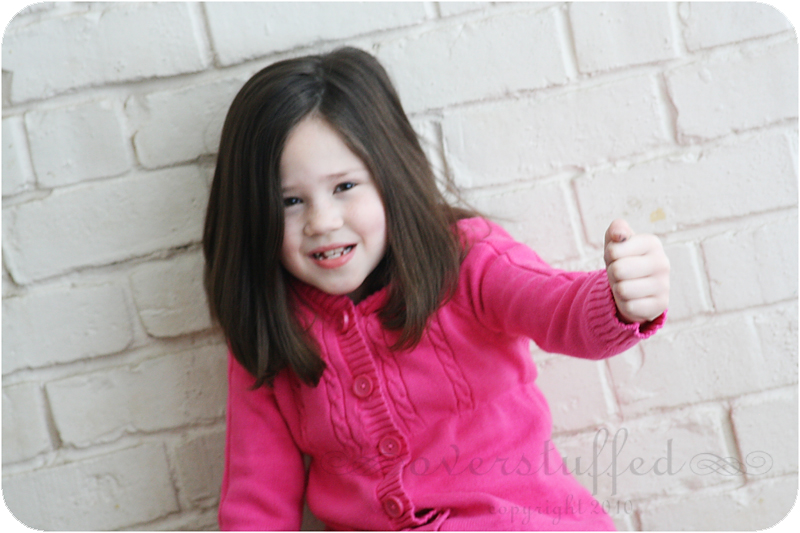 So, I began to joke with her the same exact way I had joked with Bria. I should have known better. Chloe doesn’t like to be teased like Bria does. She takes it totally personally. And instead of a real smile, I got this. 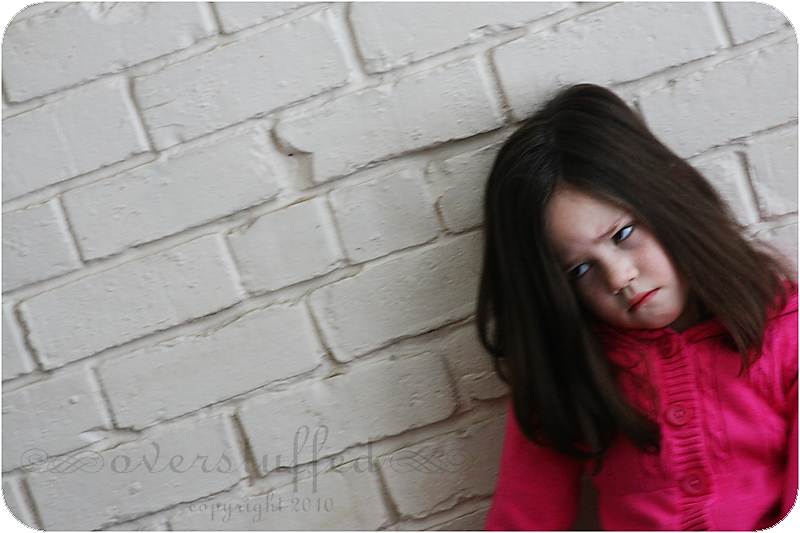 I quickly came to my senses and remembered who I was dealing with and finally got a picture that was Valentine-worthy.

Then I had to photoshop them a bit, and I came up with these: 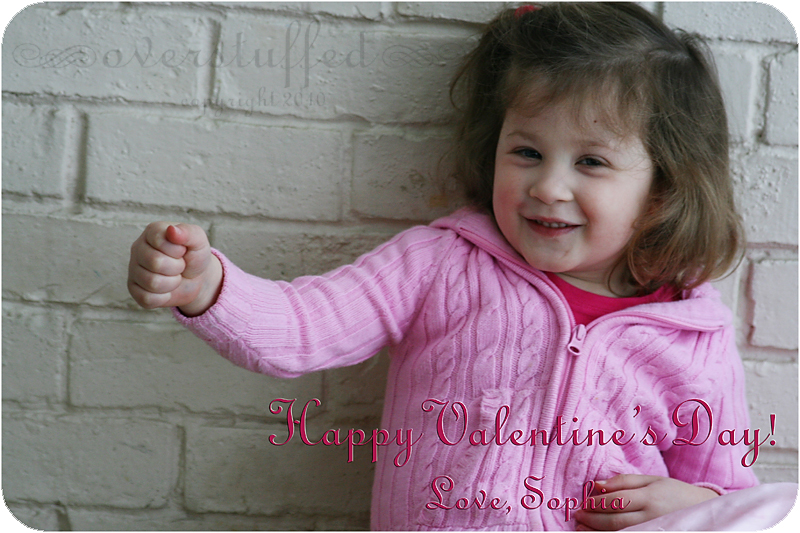 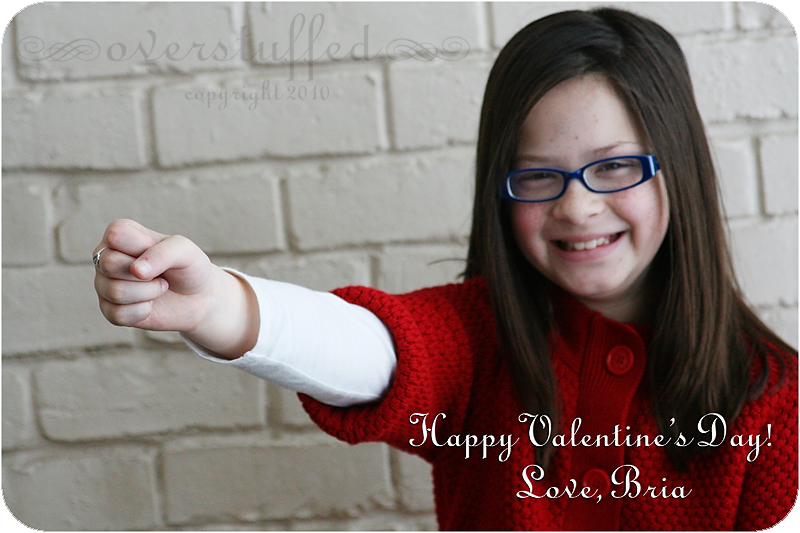 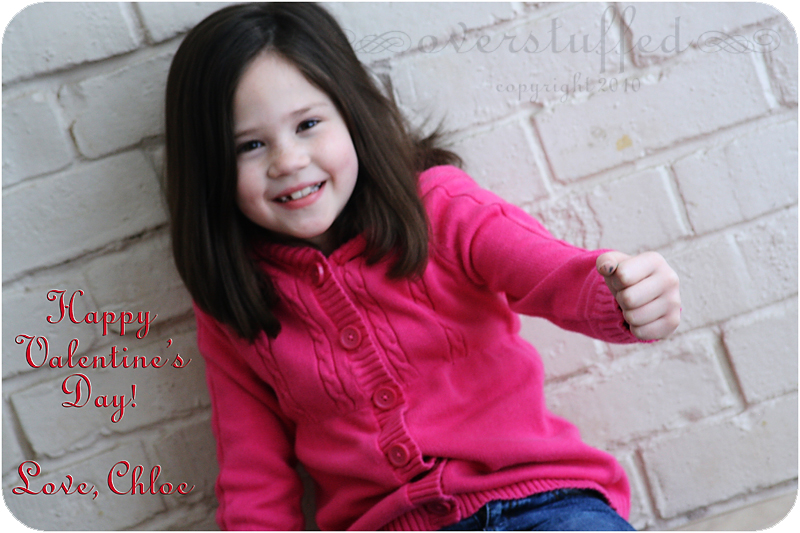 Assembly was the next step. I uploaded the pictures to Wal-Mart’s one hour photo, and bought some lollipops and red cardstock and I was good to go. I didn’t love the plain photo without something more sturdy on the back of it in the other blog, so I mounted them all on the red cardstock. Then I punched holes with my handy-dandy anywhere punch (which worked much better than the exacto knife idea, trust me on this) and inserted lollipops. Total assembly time: about 2 hours.

Not bad, considering I made 65 of these things and Sophia had one of her epic tantrums sometime in the middle of assembly. But that is a story for another day.

Here is the final product (these are the very first ones I made, using photos I printed off on my computer just to see how it would all turn out, and I used the exacto knife instead of the hole punch. You can see why that didn’t really work…but I forgot to take pictures of the good ones.) (And they’re long gone by now.) 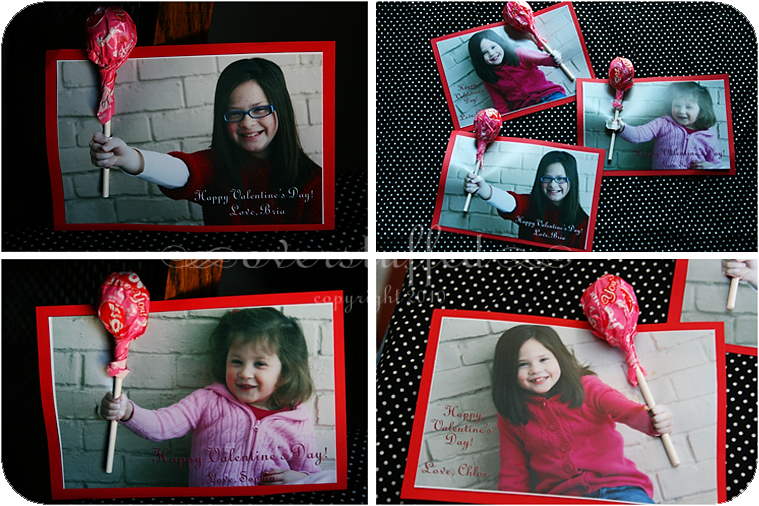 Winter’s Awakening
Next Post: Give Me, Get Me, Buy Me!

These Valentines (and your children) are simply precious!

That is sooo cool!