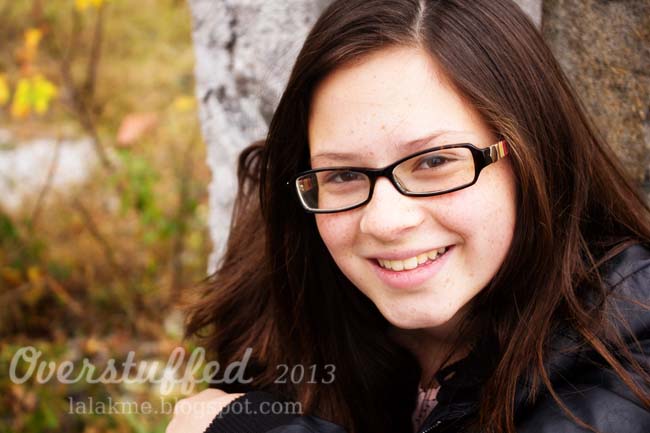 Yesterday (well, since it’s now past midnight, two days ago), Bria turned the big one three. Thirteen. What has my life come to?  I am not old enough to have my own teenager!  I feel like I just finished teenage-hood myself!

But this post isn’t about me and the way I like to freak out a little whenever my children get older (ESPECIALLY if they insist on becoming teenagers), it’s about my Bria.

She’s gorgeous.  Don’t you think? Seriously, though, the teenager thing shouldn’t come as all that much of a surprise, since she’s been acting like one already for quite a while. 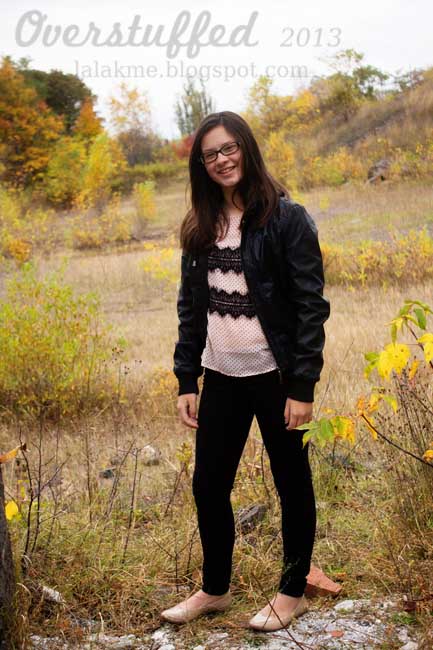 Her iPod is pretty much permanently attached to her.  Her Instagram account is maybe not as full of selfies as other teen girls’ feeds, but she’s got a few in there.  She texts her friends, finds out how to do her hair and nails on Pinterest, and keeps up with our extended family on Instagram. 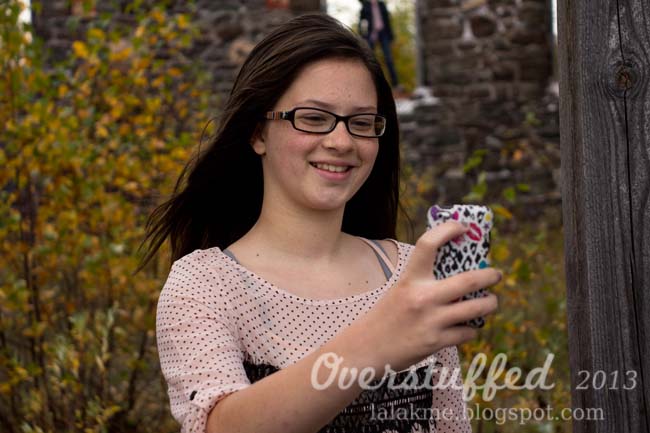 She worries about how she looks. We were a bit late getting started on this photo shoot because she thought ALL of her clothes were stupid, and her hair was totally STUPID, and EVERYTHING WAS STUPID!  (When she was finally in the car, she mentioned that if her third-grade-selfcould hear how much she uses that word, she would be appalled!) 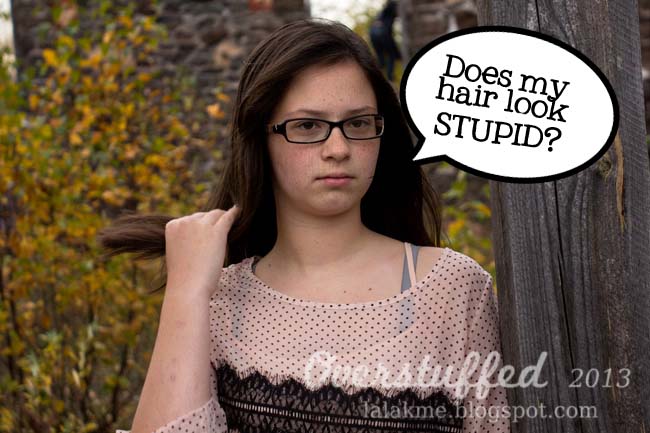 She sometimes thinks she is the Queen of the World. 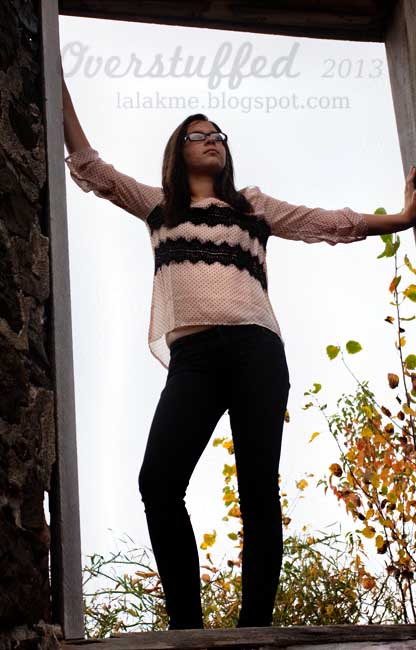 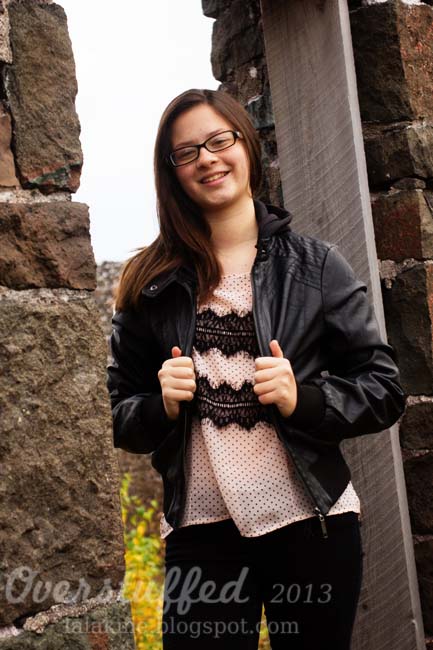 But she’s also super sweet and kind when she wants to be.  She’s very responsible and willing to help me when I ask.  She is creative and artistic and super smart.  She loves to read and she loves to tell me all about the books she loves. 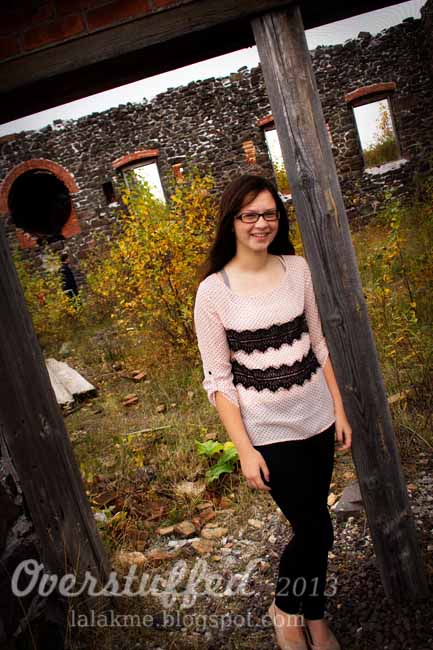 She loves her family more than anything (just don’t tell her sisters that–she’ll never admit it), and she loves her friends almost as much.  She’d do just about anything for all these people that she loves so much.  She’s already thinking about Christmas gifts for her sisters and friends, and has been planning them since August. 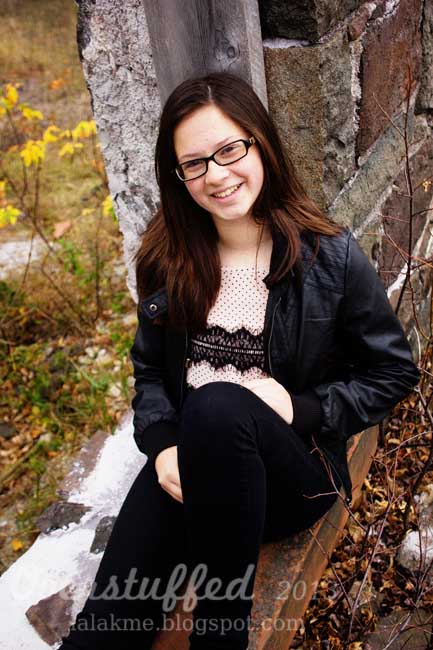 She’s super funny.  She LOVES to make people laugh.  The other day my brother found out he passed the bar and when we mentioned that to Bria, she said, “What does that mean?  Does he have a drinking problem?  And he walked past a bar without going in for a drink?”  We laughed and laughed at this, and she was just tickled that she made us giggle so much. 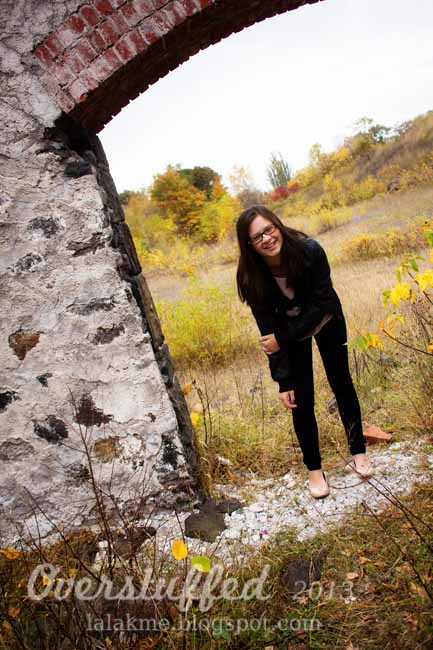 She won’t ever say it right out, but she loves her violin. And she loves music. She lets just enough out that I know this is true. She diligently gets up every morning at 6:00 to practice, and even though she complains about going to lessons and orchestra, she enjoys herself.

The other day she said that music makes her feel magical (and she was referring to Dvorak’s Cello Concerto and not whatever her favorite pop song du jour is, too) and right during this very photo shoot she told me to be careful with her violin, because it was her baby.

Yeah, she loves it. 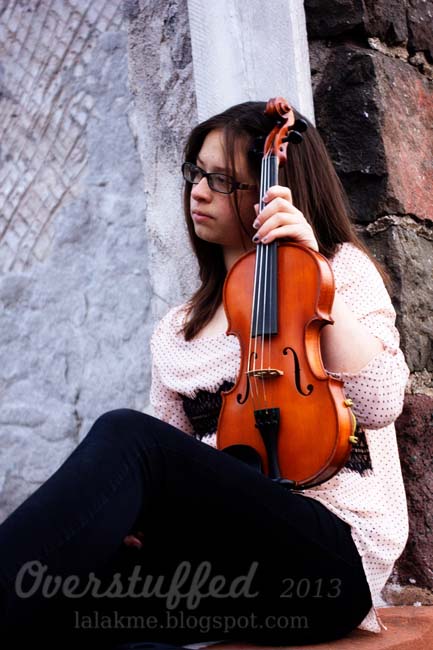 And I love her!

You’ll always be my baby girl no matter how old you get, so I guess I can live with the idea of you being a teenager now.  Maybe.

(The rest of this post is more from our photo shoot.  I’ve been wanting to try to recreate this picture with her, and she was really excited about it, too.  I don’t know how successful I was with it, but Bria really enjoyed herself! She had a lot of ideas for photos with her violin and we had tons of fun even though the light was running out.  Enjoy!) 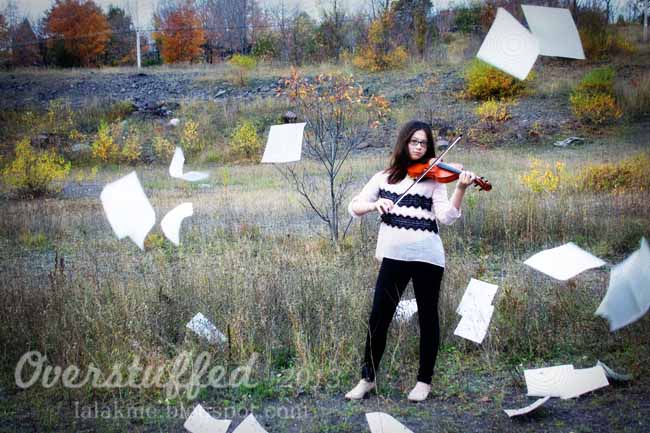 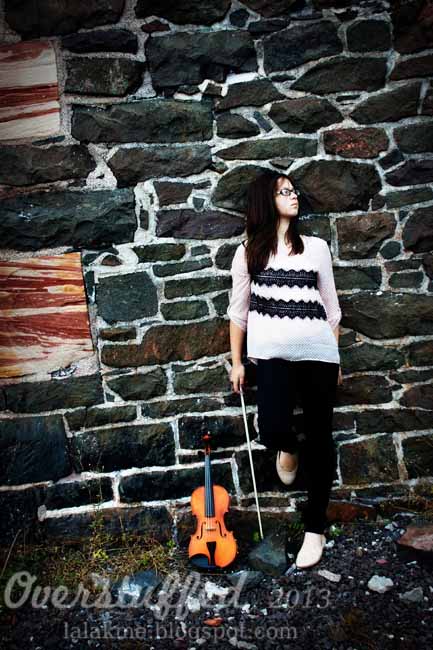 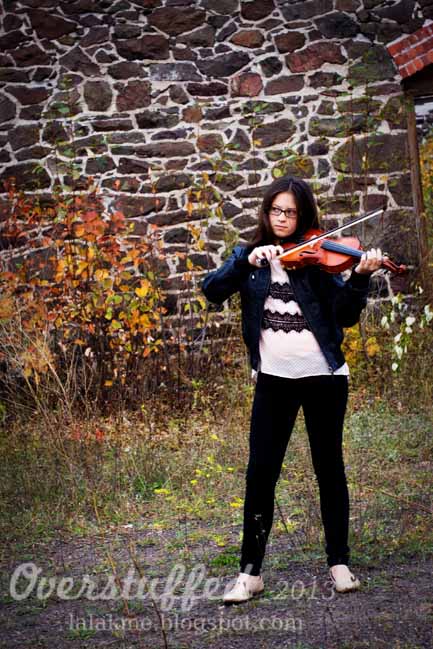 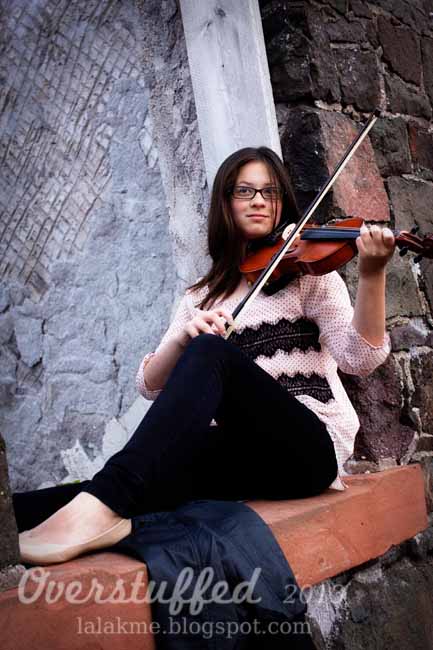 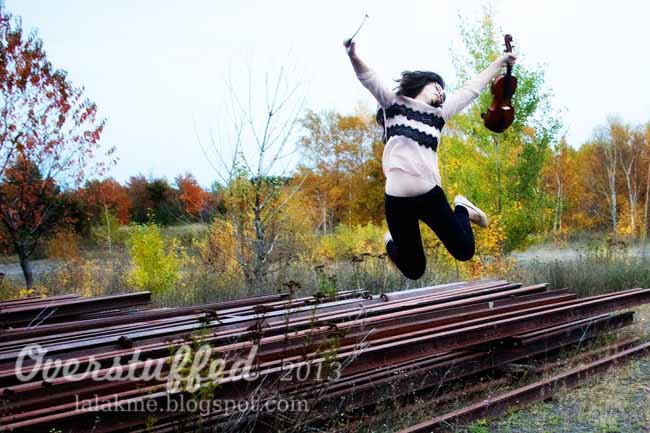 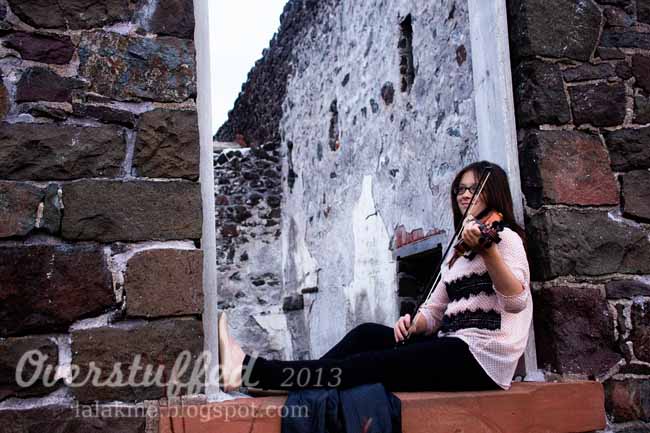 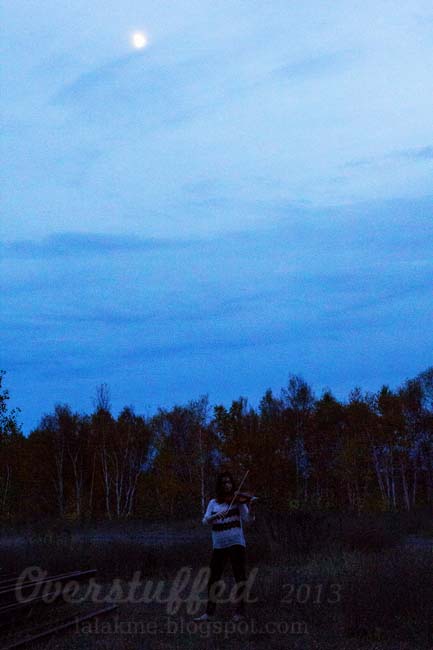 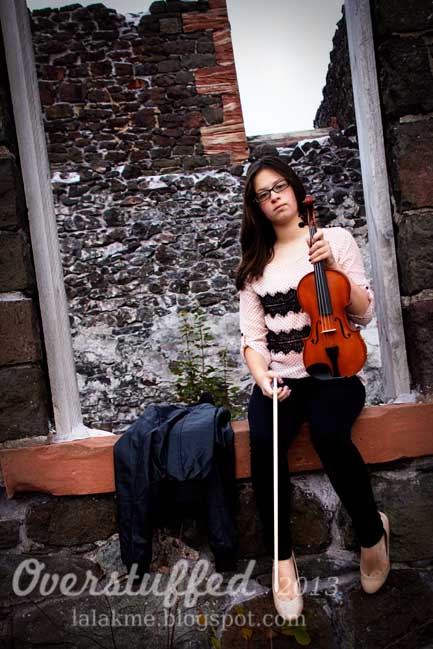 I Love Candy Corn. A Lot. {free printable}
Next Post: How to Make a Tulle Halloween Wreath

I love the pix with the papers flying.

The photos are amazing, I might be biased, but I love the violin ones. Happy birthday, Bria! You're gorgeous! My daughter Abby turns 12 this week, and I agree. It's hard to comprehend.

I would have killed to look that "stupid" at 13. She is a total babe! Not surprising in the least, considering who her mother is.

I don't know what the rest of her clothes looked like—but the ones she's wearing are super cute!

What a beautiful girl:)

Laura, I can't believe she is 13 already, of course I can't believe mine is 13 too. I still remember them playing at the base and it seems like only yesterday watching them play at the park. The pictures are sweet!

Beautiful!! What a wonderful young woman she is becoming!