Oh, you betcha I am soooo using NaNoBloMo as a way to knock out some Epic Vacation posts.  My ultimate goal is to get them into a book to give my family for Christmas this year.

We awoke on Day 8 at Mimi and Papa’s (Joel’s parents) house in Sandy.  We did a final pack-up of everything we needed for the next leg of our epic vacation and stuffed the rest of it into their basement storage room.  Joel’s dad then drove us to the airport in our van where we met up with my parents and my nephews, Brayden and Daxton. 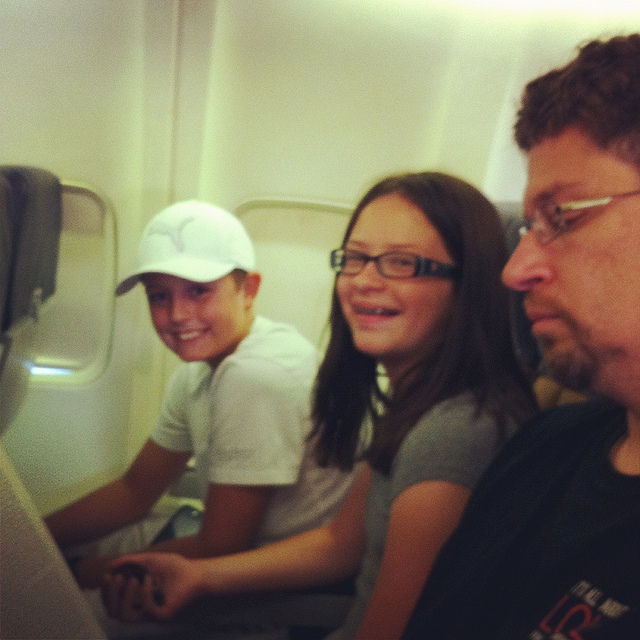 We piled on the plane and headed for Seattle!  The kids were excited to meet up with even more cousins, two uncles, and one aunt once we arrived at SeaTac.

When we did arrive at SeaTac, my mom had arranged for us to use public transportation to get to our hotel, and it turned out to be a really fun adventure that I’m pretty sure we’ll all remember forever. 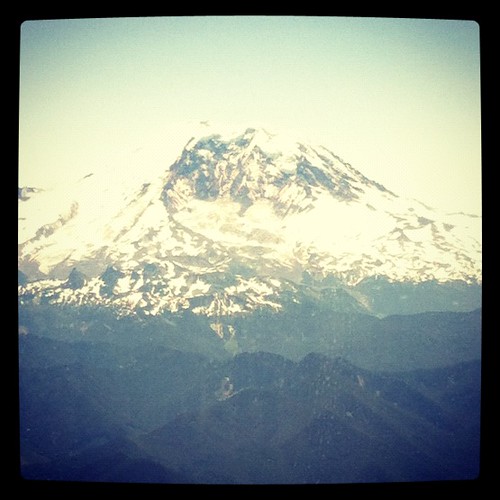 First, we took the light rail straight from the airport to the Westlake Mall.  The light rail was incredibly crowded, and since we all had a ton of luggage, it was made even more difficult.  We rode for at least 45 minutes, during which time another little girl was standing near Sophia and continually gave her dirty looks, pinched her, and kicked her!  What?  Poor Sophia was in tears, and my mom was trying to protect her, but this little child was relentless.  She was standing with her father who was completely oblivious to his daughters’ actions, and neither me or my mom felt it would be wise to tell  him to please control his child!  Sheesh.

Once we arrived at the Westlake Mall, it took us more than a few minutes to figure out where to go to get onto the monorail.  We finally found the right escalator to take us out into the fresh air, and as soon as we got to the top we were accosted by a thief and a cowboy.  Yes.  You read that right.  First, a guy in a black hoodie ran up the escalator, knocked poor little downtrodden Sophia down in his hurry to get by us, and ran down the street.  He was followed by an older dude who was fully dressed in cowboy attire–chaps, hat, and spurs–who then tripped on the escalator and fell down in the middle of our group and all of our luggage.

Apparently, the first one had shoplifted in one of the stores, and the cowboy witnessed it and was doing his good deed of the day by trying to stop him.  Unfortunately–between his fall and the fact that he looked like might have a heart attack at any second–the bad guy got away.  (We actually saw Mr. Cowboy a bit later doing some pretty unique dance moves in the street outside the mall near some street musicians.)

After that fun moment, we found our way to the monorail station and took it to the Seattle Center.  Again with ALL our luggage! 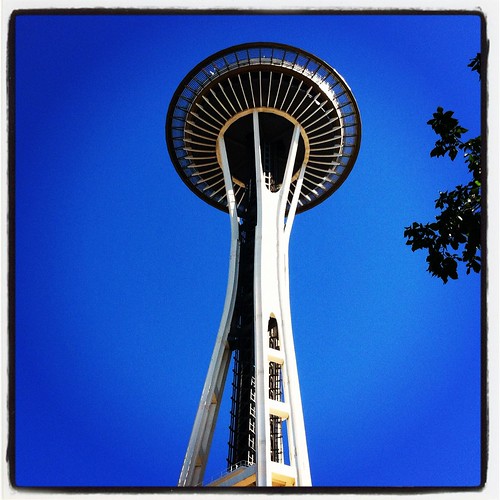 We ended up having to walk quite a distance to find my brother Dave (he lives in Seattle), who was picking us up to take us to our hotel.  We weren’t very funny looking at all, I promise.  I’m sure the good people and tourists of Seattle see huge families with tons of luggage walking nearly a mile down the street every day!

It took Dave two trips in his van to get us and our stuff to our hotel, but we checked in and got settled and then some of us (Joel, me, and the girls plus my dad and Brayden) decided to take the bus down to Pike’s Market and have some fun! 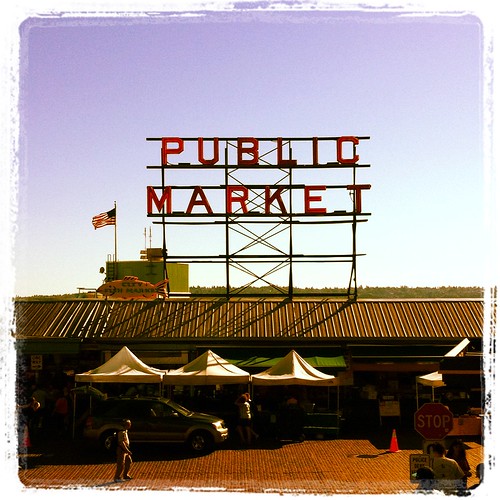 We ate dinner at a little Turkish place that sold yummy kebabs, and then I introduced the kids to Turkish Delight.  Man, I love that stuff.  I used to buy it all the time on my mission in Romania.

I had read about the Gum Wall on the internet, and it wasn’t something I had heard of before, so I had never seen it on other trips to Seattle.  We went under Pike’s Market and found it, and it was just as gross as I had imagined.  Yet it was strangely cool at the same time.  Living art.  I could have looked at it forever if I could have just gotten over the smell. 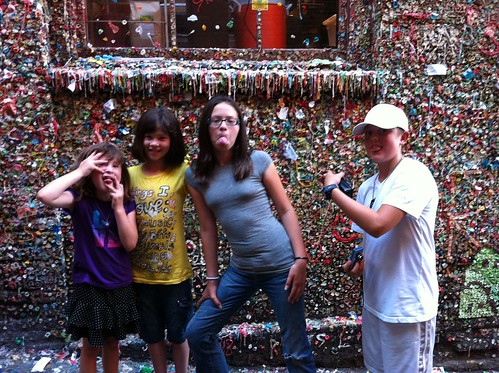 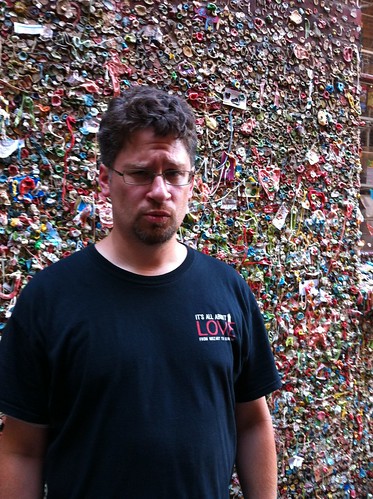 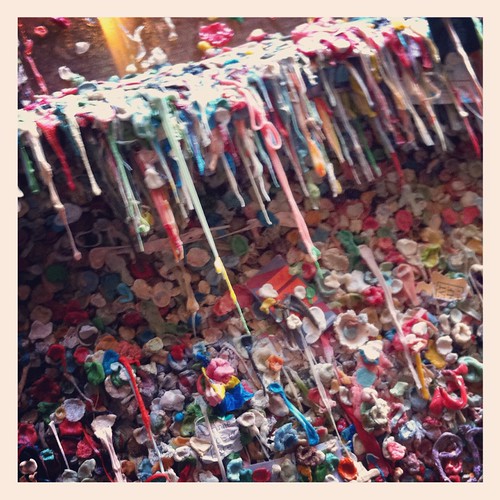 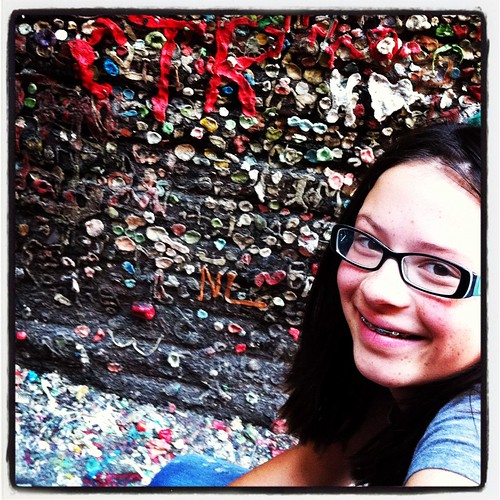 Bria even found a secret message in all the gum.  Choose the Right!  (Actually, we found many secret messages, pictures of video game characters made entirely of ABC gum, and lots of business cards stuck in the gum.)  None of us had any gum with us, so we resolved to come back the next week and add our own calling card to the mix.

We headed back to our hotel and got settled in and ready for bed, where we dreamt of yet another exciting day to come.

Our Journey to Gluten-free
Next Post: Six Things That Will Help Any Mom Stay Sane