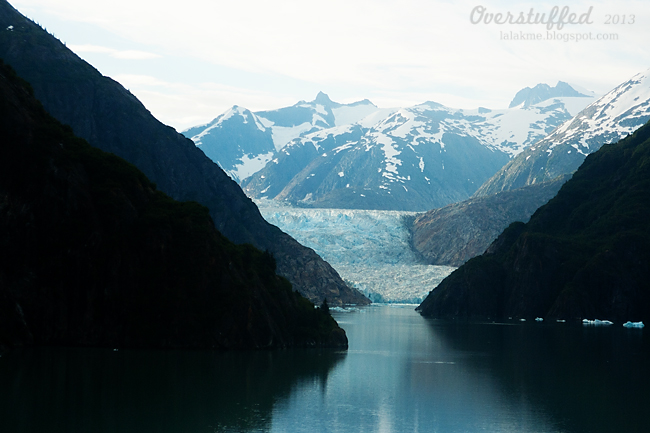 We began our day bright and early by sailing into the Tracy Arm Fjord.  The last time Joel and I took an Alaskan cruise, we did Glacier Bayinstead, so I was happy to see something different.  There aren’t as many glaciers at Tracy Arm, but what we did see was gorgeous!  (Forgive all the photos of the same one…I just couldn’t pick a favorite!) 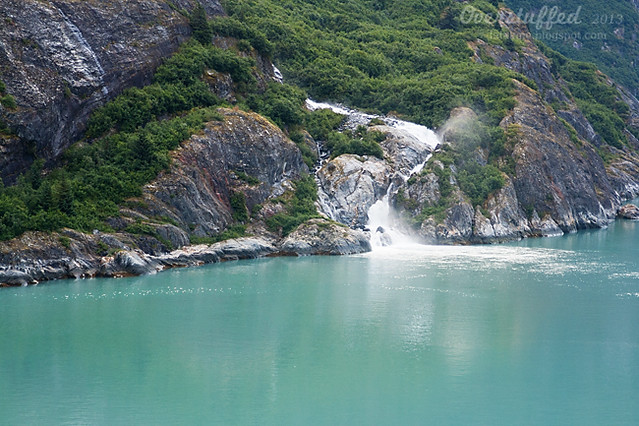 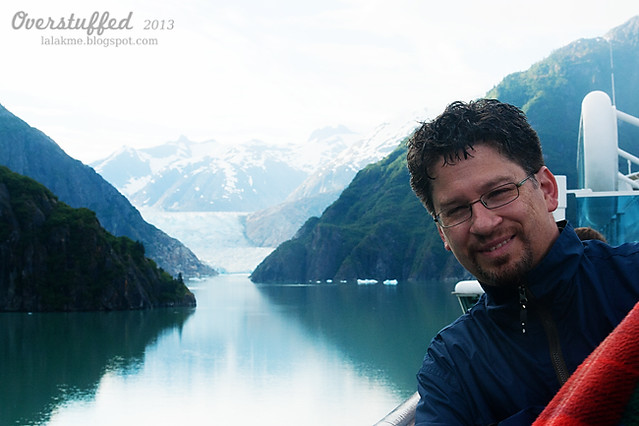 It was mighty chilly out there, even in August, so the ship gave out some cozy blankets and served hot chocolate. 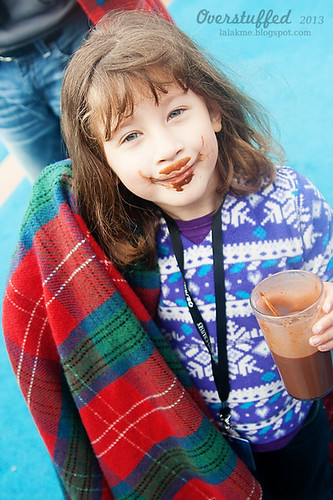 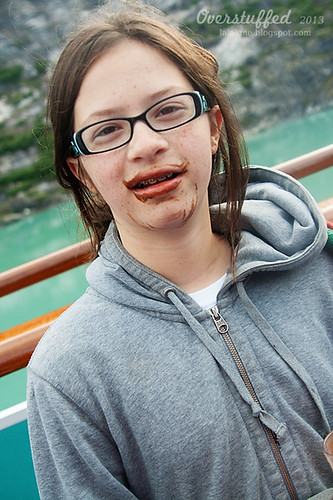 Bria and Sophia both had epic hot chocolate mustaches, but then again, I’m pretty sure I did, too. 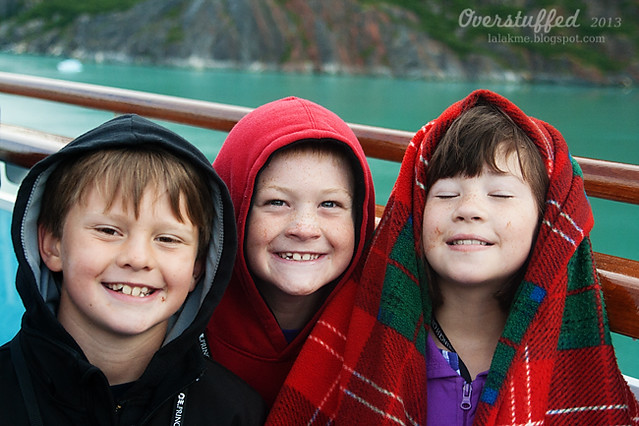 The Three Musketeers (Chloe, Tychon, and Daxton) also had hot chocolate mustaches, but they weren’t nearly as epic.  They could’ve done much better. 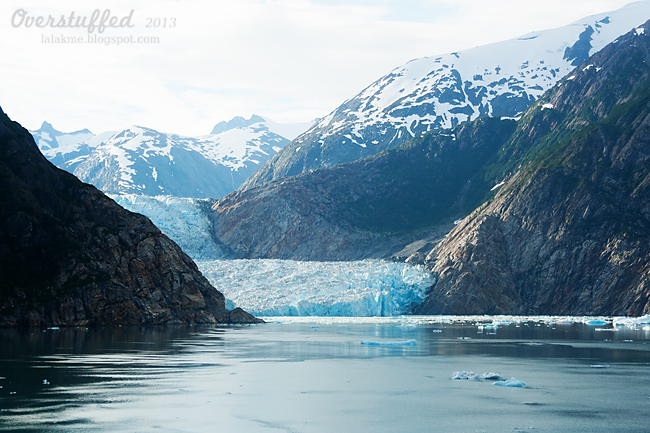 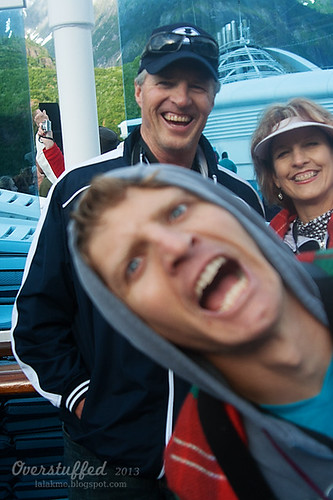 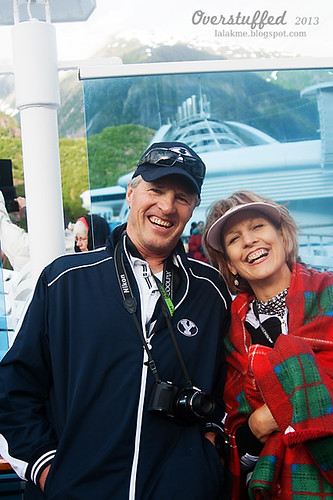 My brother Dave totally photobombed the picture I was trying to take of my parents.  But at least he made them laugh. 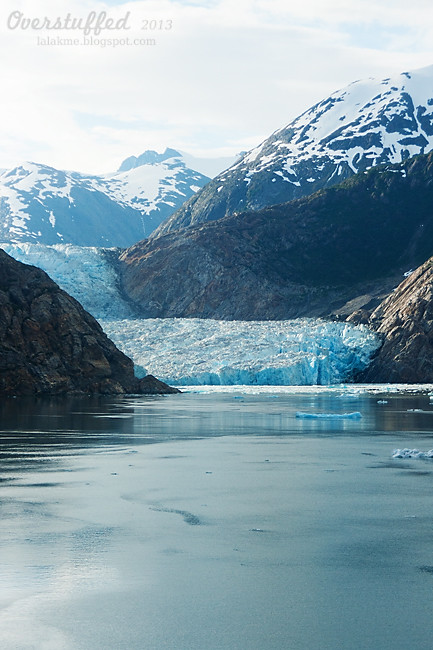 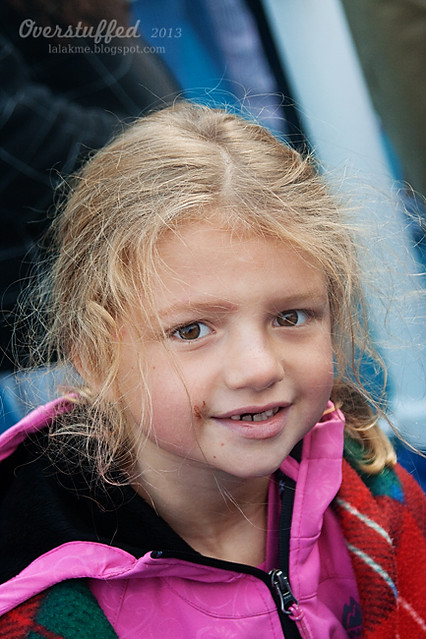 My niece Estee wins the prize for cleanest face after drinking Princess Hot Chocolate and also for having the prettiest brown eyes. 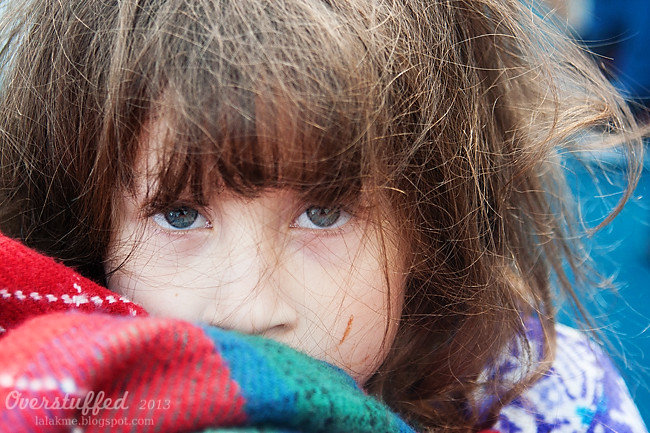 Sophia was really cold.  I gasped when I pulled this picture up to edit yesterday.  I freaking love it–it’s my new favorite photo of her.  See, aren’t you glad I’m doing all these Epic Vacation posts so that I can find hidden gems like this one? 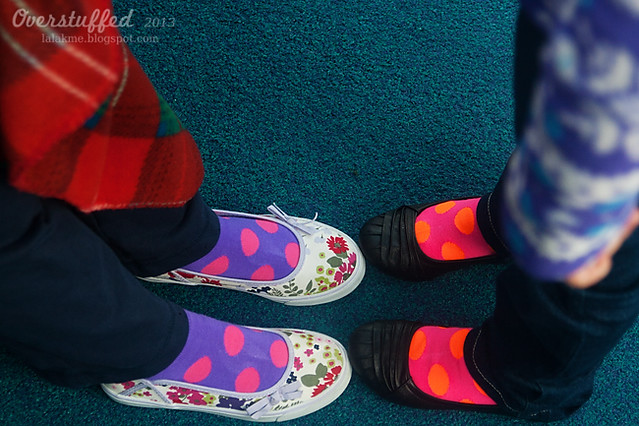 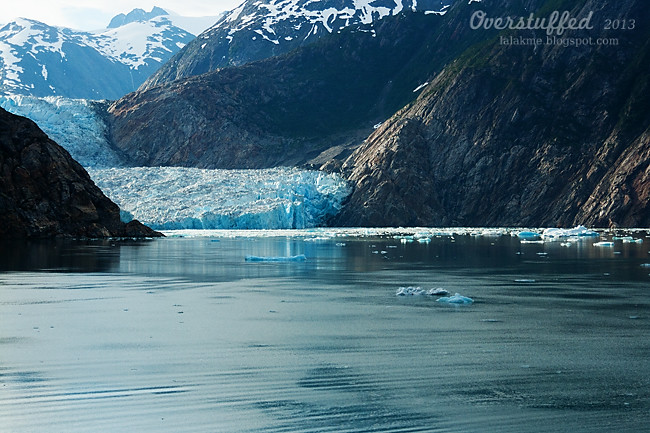 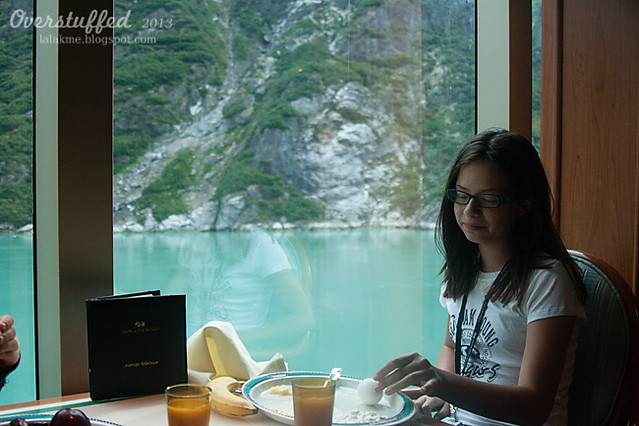 After we finally got too cold, we went in for breakfast.  But we still got to enjoy all the beautiful views of the Fjord. 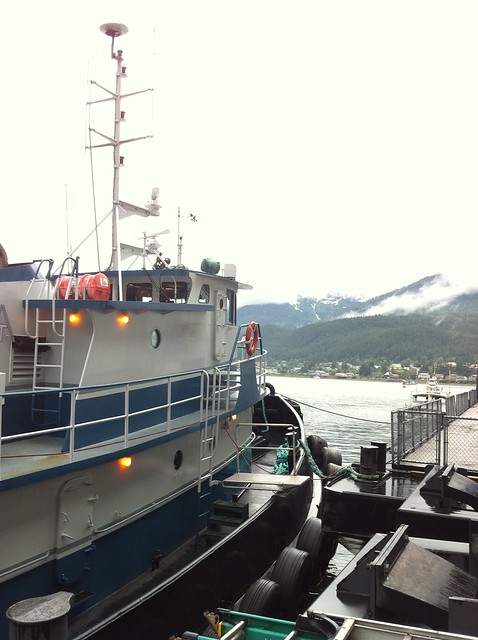 Later we pulled into Juneau, where we all left the ship.  Joel and I had hoped to take the girls on a whale watch like the one we experienced when we were in Juneau before, but it was just too darn cold. 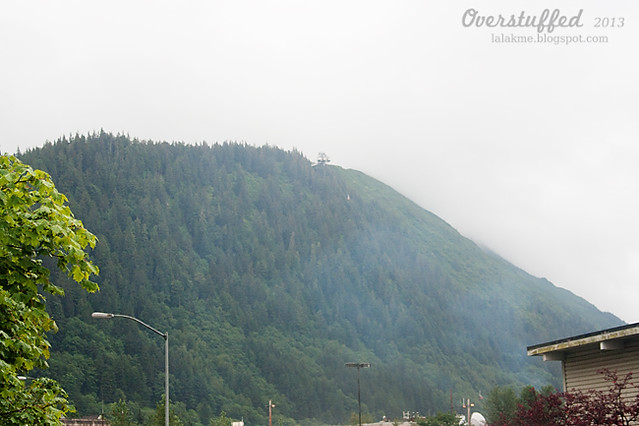 Instead, we took the tram up the mountain to a nature center/gift shop area. 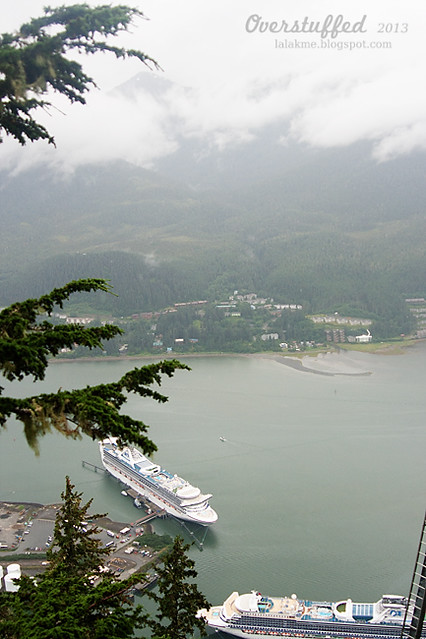 It was really cool to look down and see our ship from way up there!  We also spent a lot of time at the nature center and in the gift shops.  Unfortunately, I have no photos of either, because when it comes to having all the children around I start herding them and not taking pictures of them.  Also, it wouldn’t stop raining, so I didn’t get my camera out at all in the nature center, which was partly outdoors. 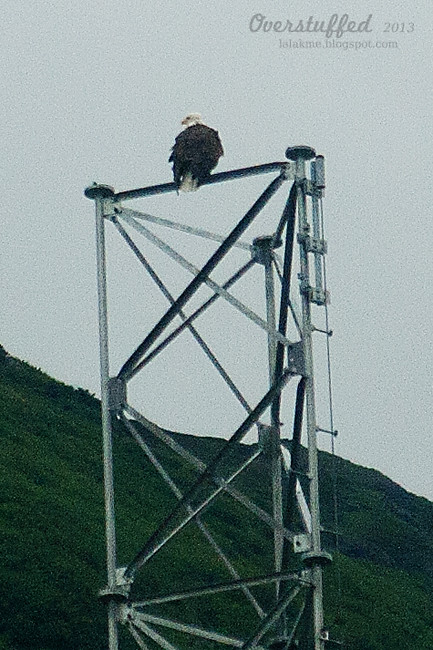 We saw a bald eagle when we came back down the mountain.  Sure wish I had a telephoto lens!  Although, even if I did, I doubt I would have brought it on this particular excursion, so no harm done. 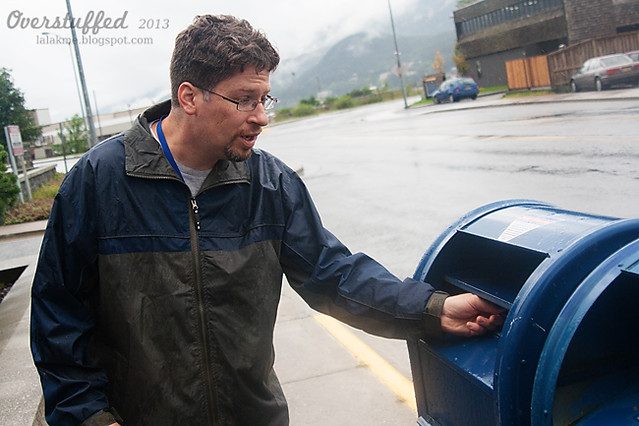 After the nature center, Dad, Dave, Nate, and Brittany all went back to the ship with most of the kids.  My mom stayed behind with Bria and Brayden to do a little more souvenir shopping.  Bria came out of that shopping trip with her favorite Alaska hoodie that she still wears all the time.  Joel and I needed to find a post office to mail our mortgage bill.  Going on month long vacations makes it a little difficult to make sure your bills get paid on time, but not too early!  We found the post office, but it meant walking over a mile in the rain in Juneau.  It was actually a really fun time we had together, and we saw some neat parts of Juneau that we wouldn’t have otherwise seen. 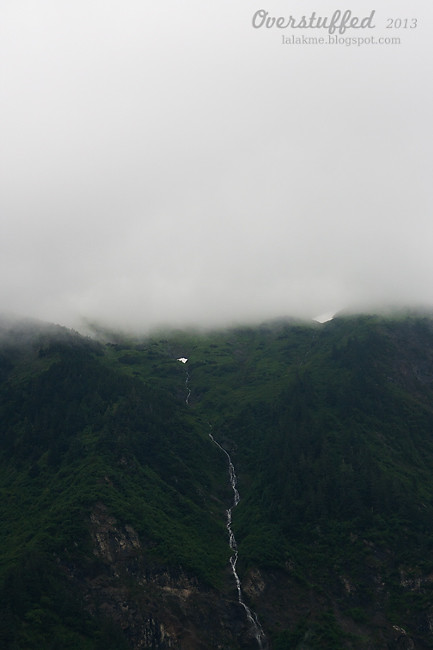 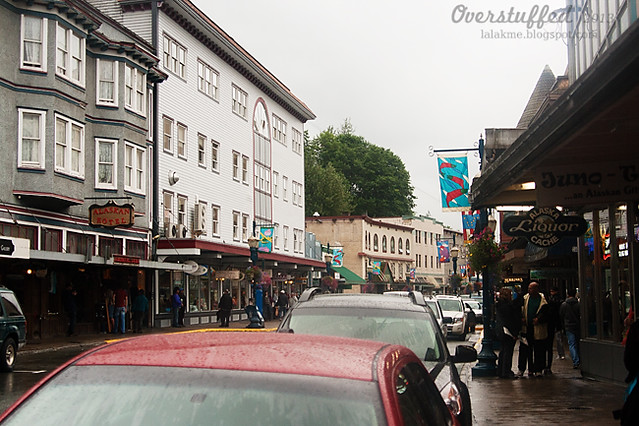 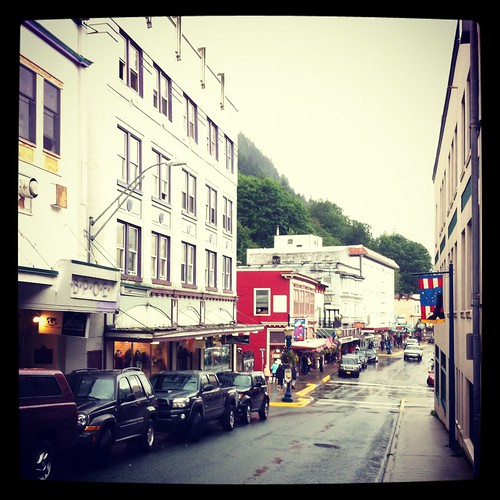 We caught the last bus back to the pier, and it was the exact same bus driver we had the last time we were in Juneau!  That was kind of fun.  Plus, he was a cool driver with lots of interesting information about the area.

Once back on the ship we dropped the kids off at the kids’ club where they had a dinner party, and the adults headed to the dining room for a little bit of kid-free dining.

And that’s all I wrote in my travel journal!  I’m guessing we were so tired we tucked in fairly early that night!