This is the catch-all cupboard in my kitchen.  I couldn’t get a photo of it with my big camera, because I have a galley kitchen and this iPhone photo was taken with me backed up against the fridge trying to make myself as tiny as possible so I could get the whole cupboard in the frame.  I simply don’t have a lens with a wide enough angle to accomplish this, so hooray for crappy iPhonography! 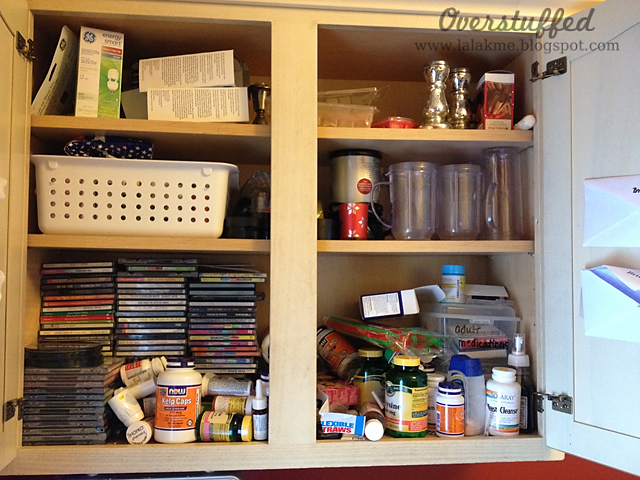 Please tell me you have a cupboard like this. Because, no matter which house I live in and no matter how much cupboard space I have, I always have a catch-all cupboard.

To make matters worse, we have lived in this house for almost 4 1/2 years now. That may not seem significant to you, but I have gone my entire marriage moving every 2-3 years.  In other words, just when the catch-all cupboard was getting beyond control–we moved. This is officially the longest we have ever lived in one house! And there are no plans for moving out of this house any time soon (thank goodness!), so my dirty little secret is worse than it’s ever been. (This is also why you should never, ever open a cupboard in your friend’s house without her permission. Ever. These types of dirty little secrets need to be kept private, which is why I’m blasting mine all over the internet right now.)

Every time I have opened this cupboard in the past few months I have vowed to get it organized ASAP. And today I finally did it. 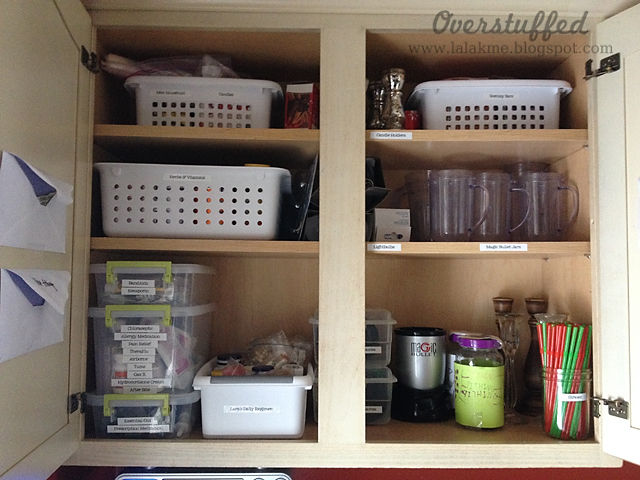 Talk about feeling some peace! Now whenever I need to get something out of that cupboard I won’t also feel the need to throw up.

The first order of business was to take care of all the CDs. I decided to finally get rid of the jewel cases altogether and file the discs in a CD binder. You may wonder why the kitchen cupboard is where the CDs lived, and we had some good reasons like 1) There is a CD player in the kitchen, and 2) The CD shelf in my office was already full. 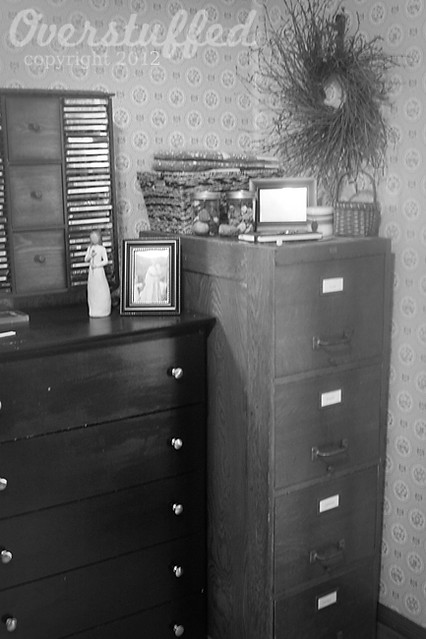 This is the CD shelf in my office. Or at least half of it. I hate it by the way. As much as I tend to value form over function (if it isn’t beautiful, I don’t want it–we’ll talk about practicality later), this one’s function was so bad I decided to get rid of these jewel cases while I was at it so I could get rid of the CD holder, too.

I spent about an hour going through the CDs and transferring them to a nice big CD case.  I bought this Case Logic CD Binder, which holds up to 224 discs. And, yes, I ended up using almost every pocket. I thought I might even have to buy another case, but The Maestro kept a nice pile of CDs to take to his office on campus and I also put quite a few into the donate pile. 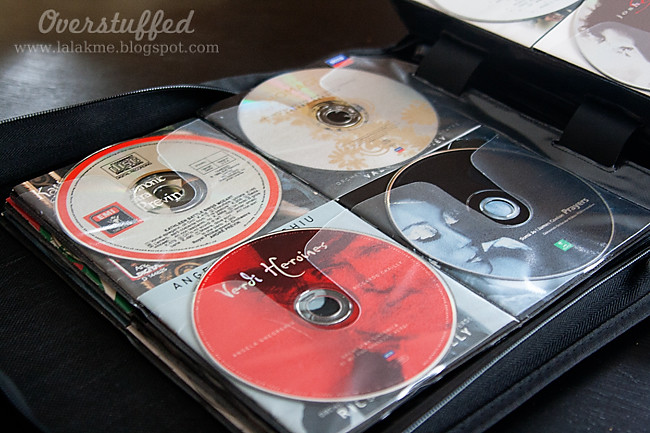 Part of the reason I had procrastinated doing this before was because I really couldn’t bear to throw away the liner notes.  So, I slipped them behind the discs, even though this made the binder a lot thicker than planned. I love me some liner notes!

And yes, the majority of the 200 or so discs in this binder are opera and Broadway.  But just to prove that we are at least a little bit cool, here’s another page: 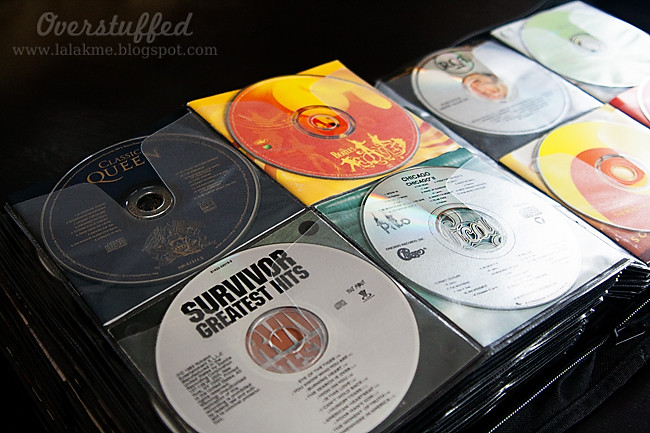 Okay, so maybe this makes us look even less cool. We have no idea about music past 1992 unless it’s One Direction.

And here are all the jewel cases. Good riddance! 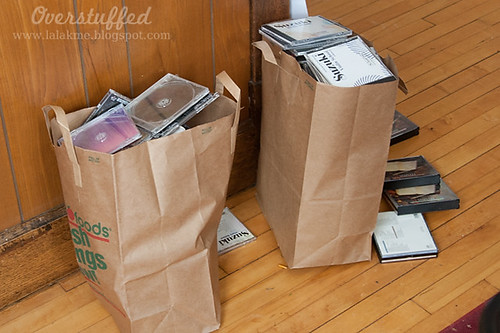 I understand that both Target and Best Buy have jewel case recyling receptacles, but both of those establishments are a two-hour drive from me. Does anybody have any other ideas? I will be heading down that way in a couple weeks, so I will probably just keep them until then.

Now to tackle the rest of that beastly cupboard.

I already had a couple of plastic bins and things in the cupboard, so I opted to reuse those.  I also bought a few more bins with lids from WalMart for 2-3 dollars each, as well as a pack of 3 baskets for 4 dollars. Then, I got out my beloved DYMO Label Maker–seriously, I can’t tell you how much I love this thing. You hook it to your computer via USB and you can use any fonts you have on your computer. You can buy tape in several different colors or clear, and it is super easy to use. I love to label everything I can get my hands on and I use it all the time.

Especially when I’m doing organization projects like this one. 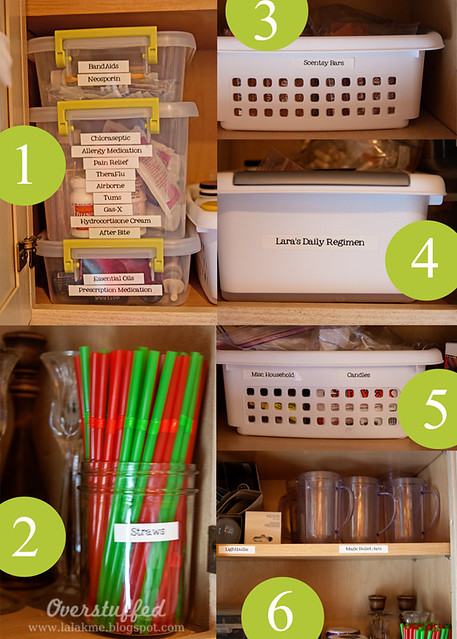 1. I used the new plastic bins with lids to store medication and BandAids. Before, I had two small bins–one for adult medication and one for children’s medication–but we have grown out of those.

I went through all the medicines and threw out anything that was expired and then divided them into categories. Basically, the Neosporin and BandAids are in one small bin (do your children go through the bandages like mine do?), the OTC medications are in the large bin, and any prescription medication we need to keep and essential oils are in the other small bin. (I’m trying to figure out the essential oils thing–I only have a few right now, but it’s on the list, so don’t be horrified my essential oil friends!)

I clearly labeled everything in the bins so things are simple to find, and simple to put away. I may have gotten a little label crazy, but did I mention how much I love my label maker?

2. We use the straws often for smoothies, but I have always just thrown the package from the store in the cupboard. I pulled out a mason jar from another cupboard, slapped a label on it, and voila! A much more lovely and functional straw holder.

I also moved a few of the candle holders down to that level so they could actually stand straight up, and Sophia’s tithing and savings jars are now there (they had been living on the kitchen window sill). The other girls keep their tithing and savings in envelopes taped to the cupboard doors, but Sophia made her jars in Primary at church a few months ago and now uses those instead of envelopes.

3. Some of the Scentsy bars had been previously stuffed in a kitchen drawer, while the rest were all over the top shelf of this cupboard. I threw out a few that had seen better days (or scents I ended up hating), and put the rest into one of my new small baskets. I slapped a label on it, and now all my Scentsy bars live on the top shelf.

4.  I take a ton of vitamins and supplements and prescription medication. At least, I should be, and I do when I remember. So, I used one of the small baskets to put my whole regimen into. It will make it so much easier because before I was always rummaging around looking for the freaking Vitamin D and only finding Vitamin every other letter of the alphabet. And, believe me, I need my Vitamin D. Now I know right where to find it.

Also, I didn’t grab a photo of it, but I put all the other vitamins and supplements into the biggest basket and labeled it “Herbs & Vitamins.” I ended up throwing out a good bunch of them that had expired, but were things I didn’t use often enough to notice. That felt good.

5. The third small basket holds candlesticks, mousetraps, and a few other random things that don’t have another home but that we need.  I put all the candlesticks into a large plastic bag to keep them all in one place. Before they were just all kind of rolling around on the top shelf and would often roll right out and onto my head when I opened that darn cupboard.  Also on the top shelf are a few other candleholders.

6. The Magic Bullet lives in that cupboard, and even though I now have a Blendtec

(which I love), the Magic Bullet is still nice to keep around for various things. Bria used it just today to make herself a fruit smoothie without having to dirty up the big blender.  I put all the lids and accessories to the Bullet into the two small bins I had previously, lined the jars up nicely (and labeled the shelf itself), and moved the blender to the bottom shelf.

I put all the lightbulbs on the middle shelf as well, also sticking the label right on the shelf. 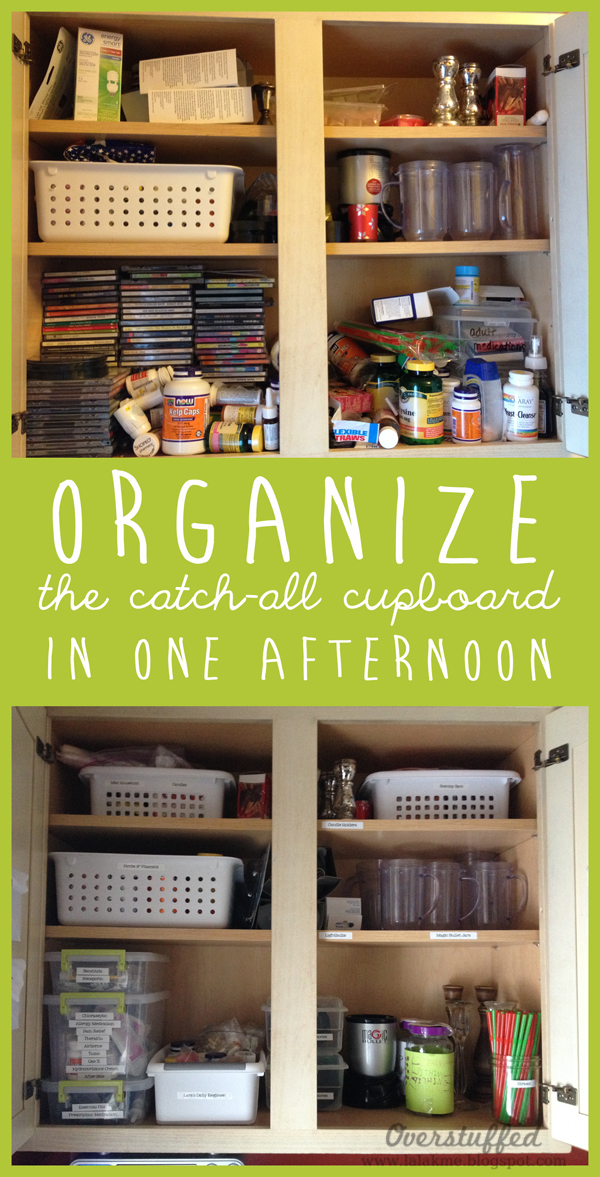 7 Organizing Projects to do in an Afternoon
Next Post: Organizing the Kitchen Pantry

This is great! You did good, honey! I have a drawer like this. It is a nightmare. We are in base housing so I need my cabinets (or lack thereof) for dishes. LOL!! Love your blog, found ya on the 2 peas thread. I am Lovemybabes on there! ~Shannon

Empty CD containers make nice small frames. Arrange many of them to make a photo wall grid. Glue 5 CD cases together with Super Glue to make small article organizer boxes for the office. Two at a right angle make a self standing desk frame.

Empty CD containers make nice small frames. Arrange many of them to make a photo wall grid. Glue 5 CD cases together with Super Glue to make small article organizer boxes for the office. Two at a right angle make a self standing desk frame.