Due to unforeseen circumstances, also known as snow days (which really shouldn’t be so unforeseen where I live), I didn’t get to complete as many quick organization projects as I wanted to before I went back to work in earnest today. I figure that since they go so quickly, I will try to do the rest of them on the weekends. We’ll see, though. A Saturday where I have the luxury to do something beyond normal cleaning and carting around is a rare luxury indeed!

But, here is the last project I completed before I started work again. The linen closet.

My linen closet is located in the downstairs bathroom, which functions as both the master bath and the main bath in my 100-year-old home. I actually organized it about 8 months ago, but as organized things do, it slowly became messy again. 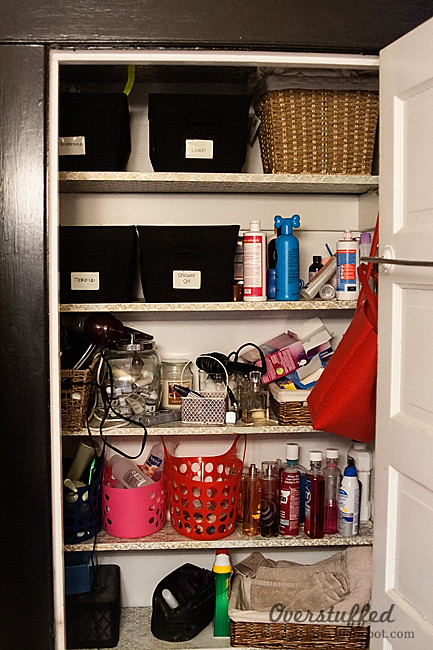 It’s not truly terrible. Unless you look really closely at the two middle shelves. Then you can see that it actually is quite messy. 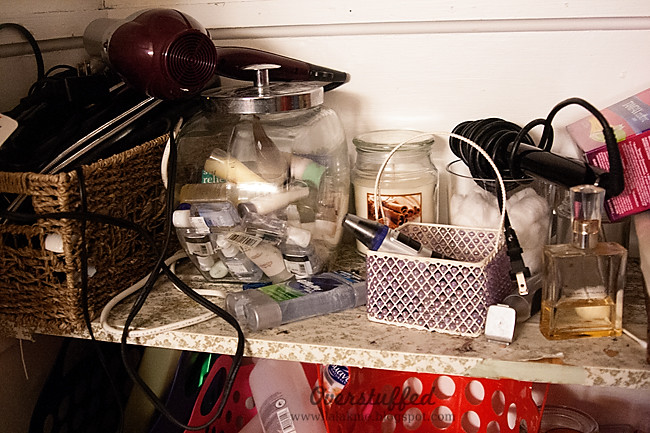 And then there’s that awful contact paper from probably the 60s or so I’m guessing? I found what was obviously 40s or 50s designs under it, so yeah. Gross. 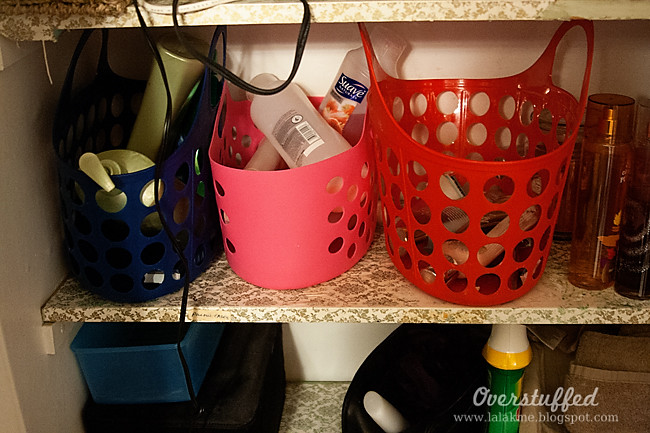 Keeping such an atrocity around as long as I have is pretty indefensible, I know. But still, in my defense, I scrubbed and sanitized it to death when we moved in, always intending to change it immediately. But, as things go, it fell from priority and then I got used to it and stopped noticing it was there at all.

But last week I finally changed it. I bought this pretty contact paper and got to it.

Since the closet had been organized within the year, I didn’t have a ton of throwing away to do, but I still found the rogue empty lotion or shampoo bottle in there. Mostly, I just took everything out and put it into categories. I decided I needed more bins than I already had, so I swiped a couple from my basement, where they weren’t doing much.

But before I started the actual organizing, I had to tear off the old paper and put on the new. 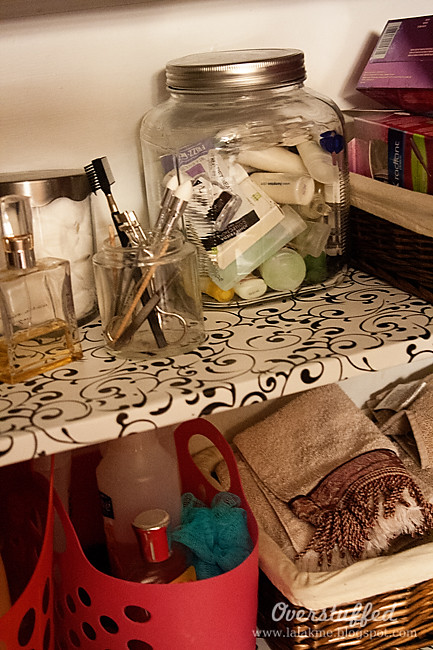 Isn’t that so much better? It’s like a breath of fresh air.

I also changed the jar that holds all the shampoo and lotion samples from hotels. I always think I should keep that stuff, so I’ve thrown it into a jar. It has finally started to come in handy since Bria began middle school and has swimming units in P.E. She will grab a few shampoo/conditioner bottles to use in the showers afterwards. It’s nice to see that supply dwindling down! 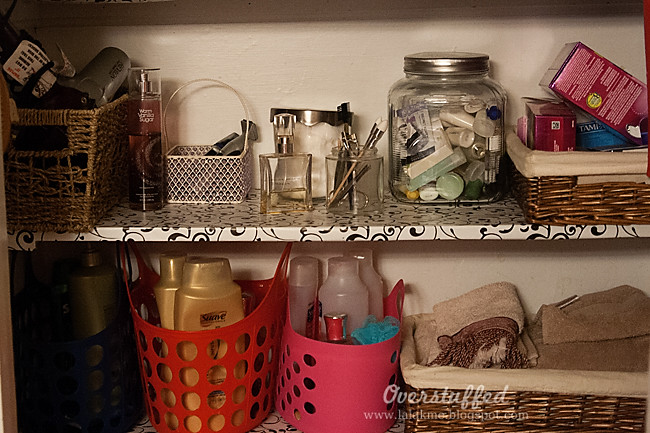 Each member of the family has one of those shower caddies, which I just picked up from the dollar store. They are each a different color so we know whose is whose. Bria and Chloe shower upstairs, so their caddies are in that bathroom. Sophia still needs a lot of help with her showering, so she usually does it downstairs, so her caddy lives next to mine and Joel’s. Each caddy has shampoo, conditioner, shower gel, and a pouf. My razor is in mine, as well. 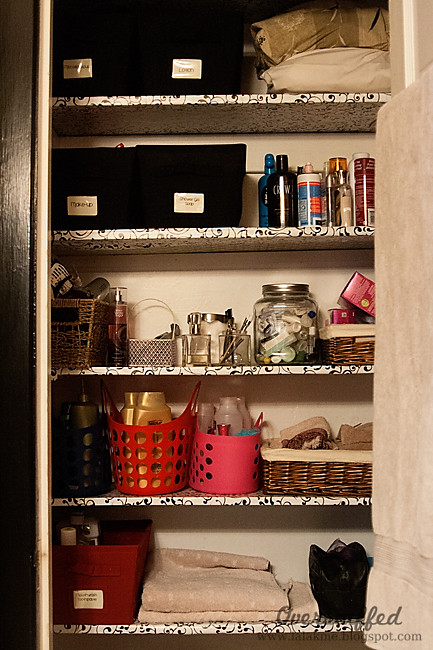 This is the finished product (I didn’t take a before or after picture of the floor, but there are two baskets there: one for towels and one for extra toilet paper).

One other new thing I did this time was to get rid of the too-small basket that was holding my sheets on the top shelf. Instead, I put each sheet set into one of the matching pillowcases. Things fit a lot better, though I’m terrible at folding fitted sheets, so mine don’t look nearly as pretty as other examples I’ve seen! But it is a really good way to store the sets, much easier to deal with than a basket, I think.

There are six bins total now, where before there were four. Plus a basket for hand towels, and one for things that are used often but still need to be corralled.

The bin categories I used are:

Make-up (I have a lot, thanks to beauty subscriptions and a general obsession with lipstick).

Soap & Shower Gel (I always stock up when I am near a Bath & Body Works, since I don’t have one in town).

Sunscreen and Bug Spray (this is on the highest shelf right now, and will become more accessible when we are going outside more often in the summer).

Miscellaneous (because every linen closet needs a misc. bin).

2.5 hours, but only because of the whole contact paper changeover. That alone took an hour and a half!

$8.99 for the contact paper. I already had all of the bins, but those particular bins were only $4.97 each at WalMart. 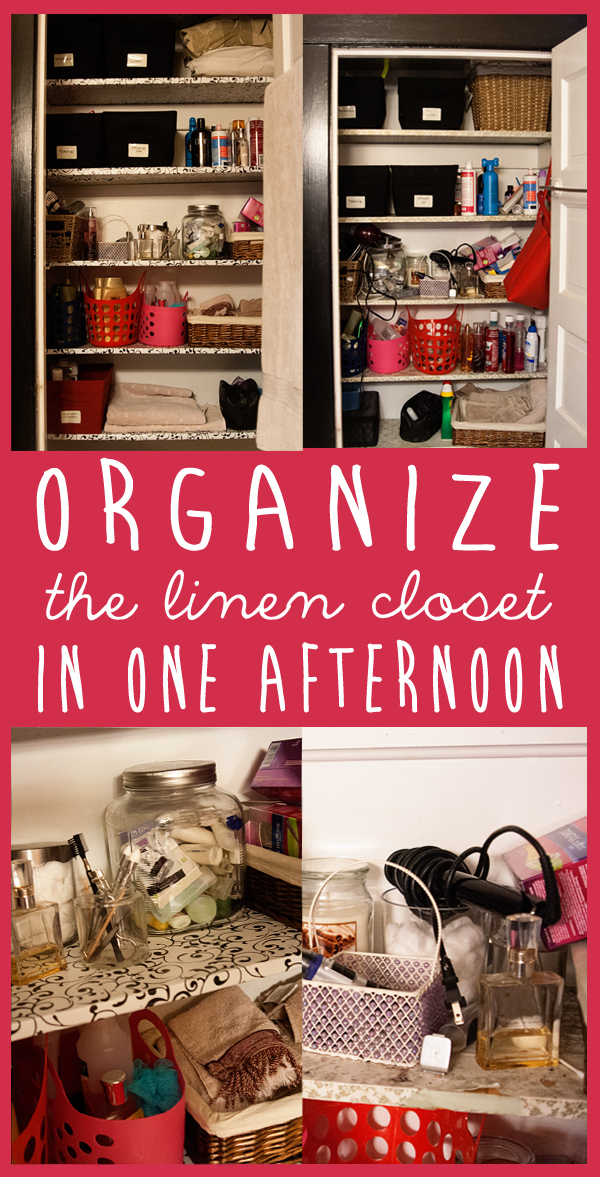 On the Path to More Peaceful Parenting
Next Post: Five Tips to Help Your Children Practice

Linen helps a lot in decorating the chairs, tables for various types of events like wedding, gettogether etc.
Contempolinens.com