Home » Gospel thoughts » Epiphany: Why We Need Opposition in All Things

In the Book of Mormon, there is this passage:

“For it must needs be, that there is an opposition in all things. If not so, my firstborn in the wilderness, righteousness could not be brought to pass, neither wickedness, neither holiness nor misery, neither good nor bad.” (2 Nephi 2:11)

I recently had an experience that got me to thinking about this gospel principle in more depth than I have before. I do have a basic understanding of why having opposition is important in our lives. That in order to grow, we must experience trials. Or that for good and righteousness to even exist, there must be an evil. We cannot know happiness unless we have also experienced sadness.

But last week, as I was driving through a blinding snowstorm to pick up The Maestro from the airport after his flight was canceled, I began to understand yet another reason why we need this opposition. If you’ve never driven in a whiteout, I will attempt to tell you what it’s like.

First of all, the name whiteout is not accidental. Everything is white. The sky, the snow, the ground, the fog—all of it. In fact, it’s kind of like a blackout, except it’s white. Depending on its severity, you have very little visibility. In this particular storm, I was driving at about 5-10 mph, and stopping often to get my bearings. I had no idea where the road ended and the landscaping began (because it was all snow anyway). I had no idea where the turn offs were to get to the airport terminal until a sign would pop out at me when I was only a few feet away. I felt very lost and afraid. 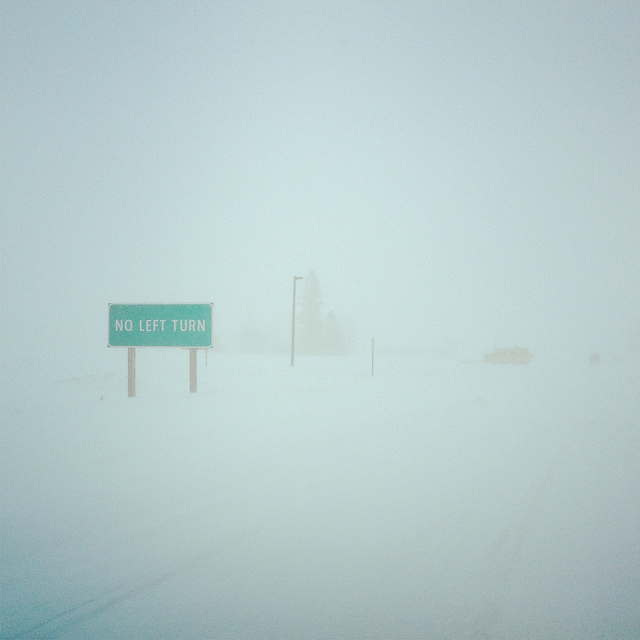 This is a photo I took with my phone during that drive. I took it while I was stopped to get my bearings. When I looked at the photo, it was interesting to me that the camera had a better ability to see the tiny bit of contrast in the light than I did, because I could only see the sign in real life. I could not see the light poles or those trees in the distance at all.

Driving on the highway before the airport turnoff wasn’t quite as bad. The reason? So many cars had driven on that road that the snow had been worn off in my lane and I could see black. I could see that contrast. Black is in direct opposition to white, and I was so very grateful for it at that moment. But when I turned off into the airport there was no worn down snow, and I didn’t have the contrast to guide me. 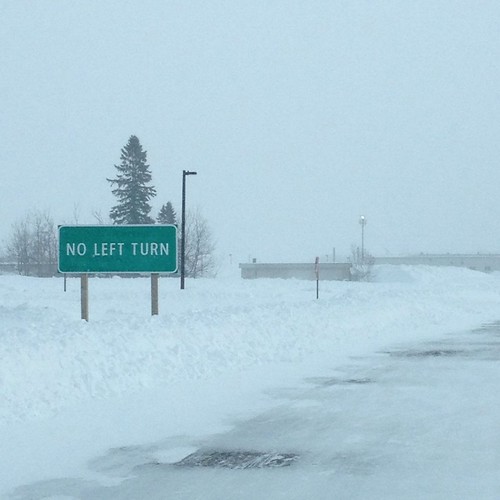 This is a photo I took with my phone several days later when I drove back to the airport to pick up Joel again—this time after he had made it to Texas and then had a difficult time getting home due to more storms (a very literal series of miracles brought him back that day—more on that another time). As you can see, it was still stormy, but it wasn’t a whiteout. You can also see from this picture just how terrible the first picture was.

In order to know where we are going and to see our way there, we need contrast. Whether that is light in the darkness or a black road in a whiteout, it is absolutely necessary. We need opposition to tell us whether or not we are on the right path—or on the path at all! And those of you who have read the Book of Mormon will probably think about Lehi’s dream and the Iron Rod, as well.

This is probably old news to many of you, but it’s something I hadn’t thought about before. And since I want to know if I’m on the right path, I will now appreciate opposition all the more.

Would you like to read the Book of Mormon? Email me at [email protected] and I will gladly send you a copy.

More of my Gospel Epiphanies:

The Parable of Bria’s Glasses

Cast Not Away Therefore Thy Confidence

I love that you are my friend. Thank you for writing this. 🙂

I never thought about it like that before. What a mind opening example. Driving in the snow, I am always grateful for that black road or the trail other people have left for me. The spiritual connection to that is just…beautiful. God is so wise. And so are you.