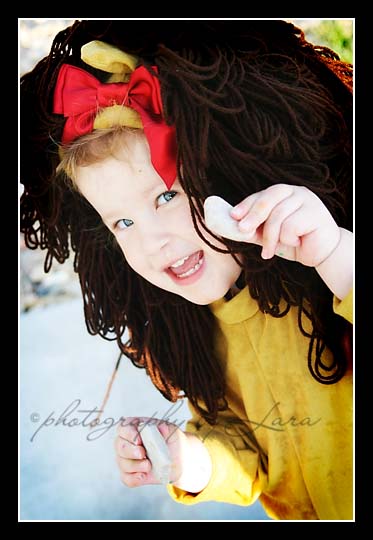 Yesterday I finished Miss Cowardly’s costume. One down, two to go. Once my recital was over, I started the sewing, and to be honest, I’ve been less than consistent. But it’s done! And isn’t it cute? 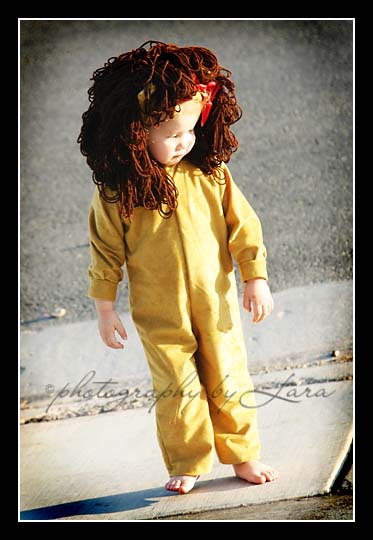 Actually, turns out she takes after her father and has a kind of big head. Knowing this, I made the largest view of the hood, even though her bodysuit is the medium size. Thank goodness for the mane, because the hood is still way too small for her. I had to extend the closure in the front, and so I still need to put some extra yarn there so the mane goes all the way around. So I guess I’m not done. But I am for now, and need to start sewing up Dorothy’s dress. I’ll fix the darn mane later (it was super annoying to sew). 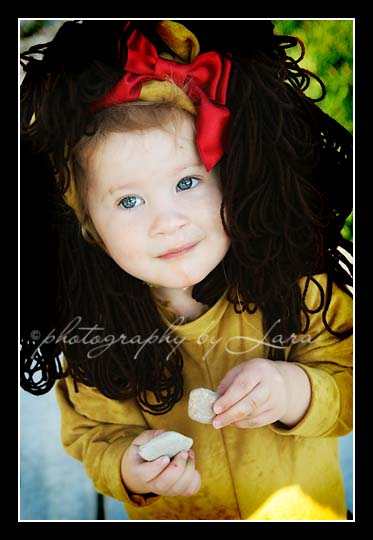 Here she is checking out a dead cricket on the driveway. As long as it’s definitely dead, she doesn’t scream too much. I needed to show you this picture so you could see her cuteriffic tail. It’s her favorite part. 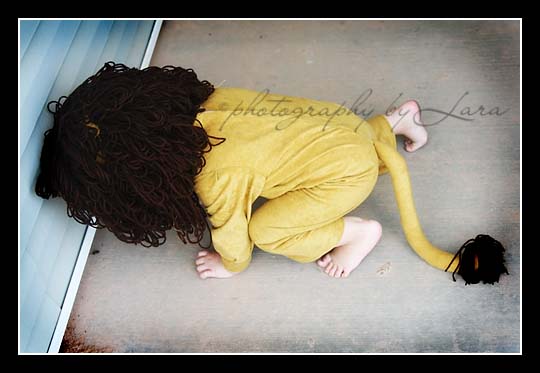 Previous Post: « Ceasing
Next Post: All we were missing was the yellow brick road
(oh, and the Tin Man, and the Wizard, and the munchkins, and the Wicked Witch of the East…)

I wish we were going to have matching costumes this year.

How cute! She is going to be the cutest lion ever! Great job.

That’s my girl! It is so rewarding to sew things up, even though Walmart can make things these days a whole lot cheaper. I’m so grateful to gained these skills Lara. So important.

That’s awesome! Good for you.

Love it! I say safety pins – safety pin one side of the mane to the other. No more time spent sewing this one (I totally believe in making do wherever I can). That is a great tail!

This just brought back a memory of when I was the Cowardly Lion in the Wizard of Oz, in elementary school! Thanks for the memory!

OH GOODNESS. Precious. I love looking at pictures of the girls! Bria is almost 8!!! I love them!
Good Job Lara, wonderful job.

Okay – seriously – could she be any cuter?! I am in awe of your sewing skills my dear friend!

SO CUTE! You did an amazing job..love the red bow in the mane!! Such a cute touch!

so darling. the aerial view is purrrfect.

Lara, that is a DARLING costume!! (With one adorable little girl inside….) I’m quite impressed.

thanks for stopping by my blog. and for the advice. i’ll post later about how it all turns out.

now, you are one talented lady. way cute little lioness you have there.

That’s adorable! I really need to learn how to sew. I have no idea what my kids will be for Halloween (except Zoie did mention being a princess–again–for the third year in a row).

People would BUY those, Lara…..

Imagine how small that headpiece will be when she actually gets her brain. 🙂

I am very impressed!! The costume is so cute!!! Way to go!!! Zack keeps changing his mind about what he wants to be so I have no idea if I will be sewing costumes or not? Keep up the good work!!

You did awesome, she looks so adorable. What a great costume. It almost (ALMOST!) makes me want to make some for my girls!

ADORABLE! So, so precious!

WHAT THE HECK?!!! THat is the cutest costume ever! I can’t wait to see the whole group!

Great job Lara! What talent! I need to get started on Auralee’s costume. Taryn’s I just put together with stuff from the $1 store :). Gotta take the stress out somehow.

You rock! Seriously. I am waiting anxiously to see the others when they’re finished.

Oh that is so cute. I love the tail! You know, we have lots of dead crickets here for her to check out.