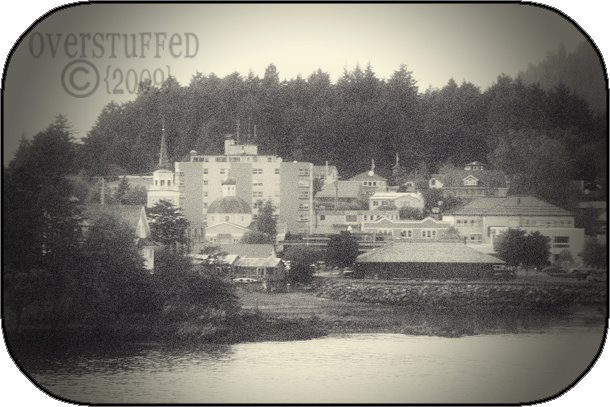 Our second port was Sitka, Alaska. If you’ve seen The Proposal, this is where it was set. I haven’t seen the movie, but I do know it wasn’t actually filmed in Sitka. They made a town in Maine look like Sitka. I did look at some pictures of the set and they did a pretty darn good job, too. Amazing what the movie people can do.

I loved Sitka. I thought it was one of the coolest places I’ve ever been. It is the fourth-largest city by population in Alaska, and it only has a population of about 9,000 people! It was originally settled by the native Tlinget people, but Russians settled there in 1799.

St. Michael’s Cathedral–a Russian Orthodox Church–is probably the most well known tourist attraction there. I have a fascination with the Orthodox religion, simply because I served my mission in Romania where the Orthodox Church is the main denomination. Mom and I went and took the little self-guided tour of the church while Joel and Dad went in search of chocolate, which is apparently more important than history.

I love the Byzantine architectural style of most Orthodox churches, including this one. 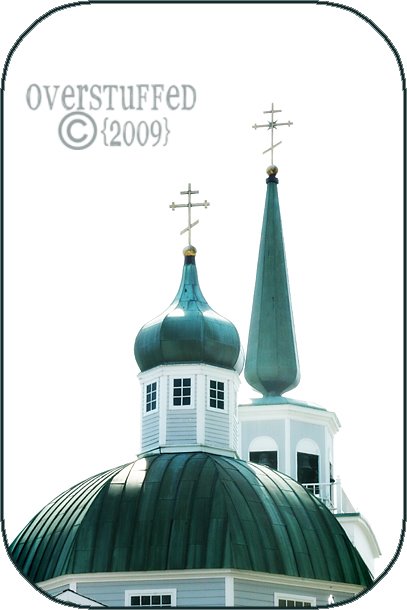 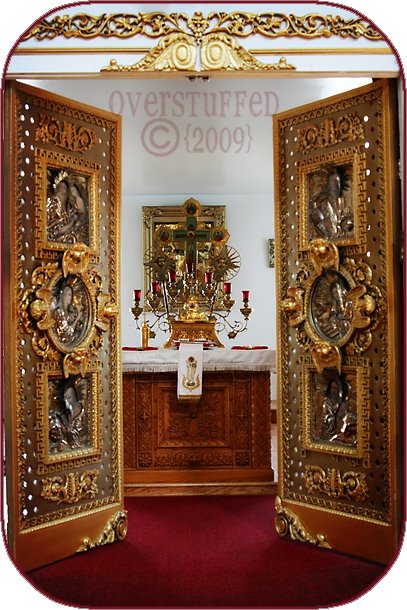 This is the roof from the inside. I loved the blue(even though everything in Alaska is blue). 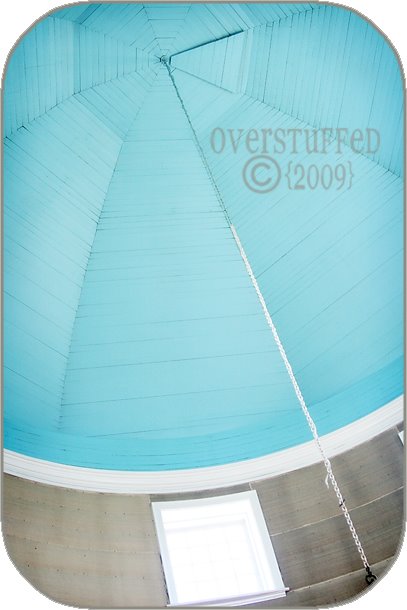 We didn’t do any of the cruise excursions in Sitka, instead opting to just explore the town ourselves. Mostly we checked out all of the cute shops, and yes, Joel found his chocolate.

We ended our time in Sitka in a castle fortress that overlooks the ocean. Apparently it was built by the governor of Russian-America, Aleksandr Baranov to watch for people coming into the town from the ocean.

Joel was a little impatient waiting for me to climb the fortress stairs. I had accidentally pushed a button on my camera that was causing it to overexpose everything and I really wanted a good picture of the stairs. Unfortunately, by the time I figured out what was going on with my camera, Joel was in all of my pictures looking exasperated. 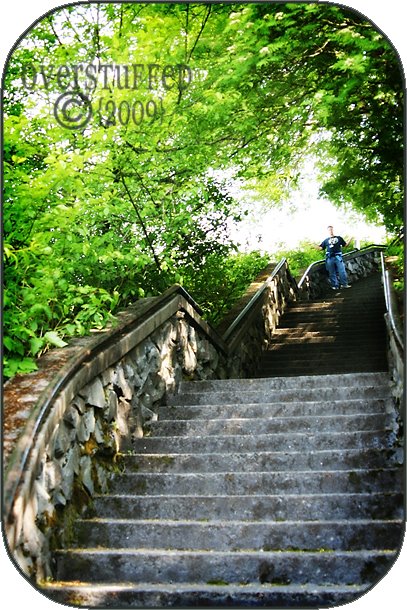 I don’t have a single stair picture sans-Joel.

The views from the top were pretty amazing (the picture at the top of this post is a view from the castle fortress). 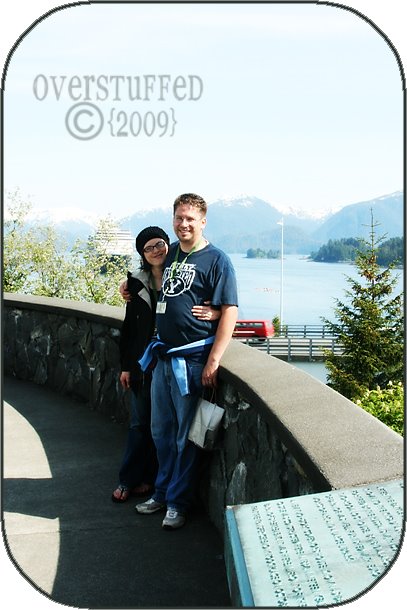 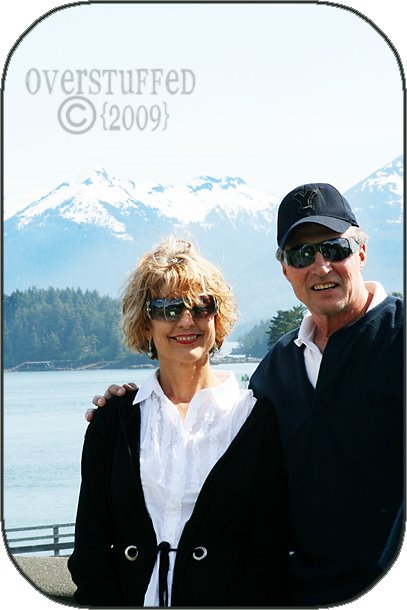 And then we went back to our home on the water for another night of good food, good entertainment(Scrabble), and good company. 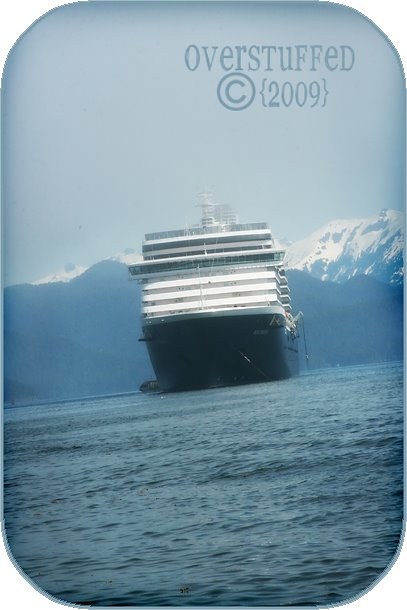 PS: I never finished writing about our Juneau port, mostly because the pictures weren’t very good from the rest of our time there. So, just for the record, after we did the whale watch we went to visit the Mendenhall Glacier and then went on a salmon bake and did some shopping. There. Now I am guilt-free.

I just went to the Proposal and told my hubby that I wanted to move to Sitka. I fell in love with it. Maybe the house they were in though too 🙂

These are just gorgeous pictures. You did such a great job in capturing each day. Oh I can't wait.

I'm gonna have to side with the men on this one—despite that fact that history was my major, chocolate is MORE important:)

I'm loving your pictures—totally gorgeous. My family did an Alaskan cruise two years back. I think we went to most of the same places. If you need some of my Mendenhall Glacier pics you can have them:)

Pictures are great I love them.

My dad almost got a job in Sitka when I was a teenager. They found out he was mormon and the interview went cold from there. Too bad – it looks like a really cool place. But I probably wouldn't have ended up here if we had moved there 🙂

That is a beautiful cathedral! Love seeing your pictures. Even with an exasperated Joel in them.

Once again, gorgeous pictures. When I saw the first one, it looked like it came from somewhere with a Russian influence, not America. Very cool.

i love traveling vicariously through your blog.

I have never even heard of Sitka before! Love the cathedral.

I just saw The Proposal last night. I liked it. It's one of the better chick flicks I've seen in a while. Anyway, we didn't go to Sitka on our cruise but the movie reminded me very much of Skagway, which I'm sure is a similar feeling.

I really liked the Mendenhall glacier. Even though it's, you know…blue.

The Alaskan islands are pretty high up on my bucket list..thanks for posting your photos! Time to start saving pennies now…

Really terrific photos. I love the rich colors. I, too, love the whole orthodox thing. I grew up Catholic and have five Romanian nieces and nephews, so it a cool part of our family.

Ok, I'm on Joel's side, I would have gone looking for chocolate! The cathedral pictures are beautiful though.

Great pictures as always, and it looks like you had such a great time (But I don't remember any pictures of all the food. Did you post some? Or did I miss them?)
:~D

My DAD grew up in Sitka! I'll have to show him these awesome photos. 🙂

Ooh! That would be fun to explore!

You certainly got some great shots despite the hassles. And sooo glad Joel found the chocolate, history is cool, but let's face it, chocolate is delish in any situation! LOL

Those long steps are amazing. And the first picture looks so much like an old-timey post card, it's breath taking.

Gorgeous pics Lara! I haven't seen the movie yet, but found it interesting it wasn't really filmed there. I wonder why…maybe it was cheaper to film it in Maine? And maybe chocolate is more important than history?? Heehee…at least on certain days 🙂

…and, my husband would love the idea of a large city being 9000 people. He is ALWays talking about moving to Alaska, because he loved it so much when he lived there when he was sixteen…
:~D

It is so beautiful. I really need to go there.

Huh! Interesting. I guess you don't get many Russian Orthodox churches in America, do you? There are some around here, but they're pretty much all converted to "regular" Catholic churches. It's weird to see Catholic churches with that kind of architecture, though.