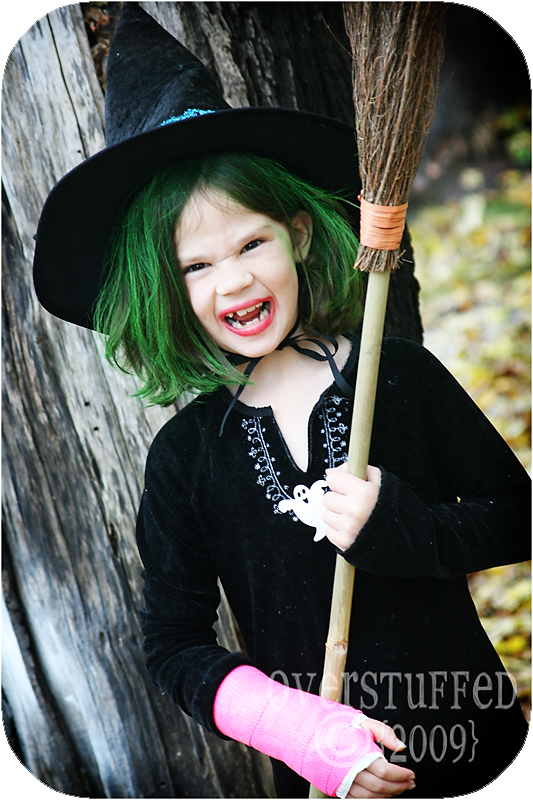 When we first began planning for Halloween, Chloe really wanted to be a cowgirl. Sometime a few weeks ago, all of that changed, and she became adamant about going as a witch.

Cool with me. We had a witch costume that would fit her and we’d be all set.

Then she broke her wrist. The sleeves of the witch costume were way too skinny to fit over her splint, but that didn’t deter her. She ran upstairs to her closet and found a black dress that she could wear over the splint and that was that. 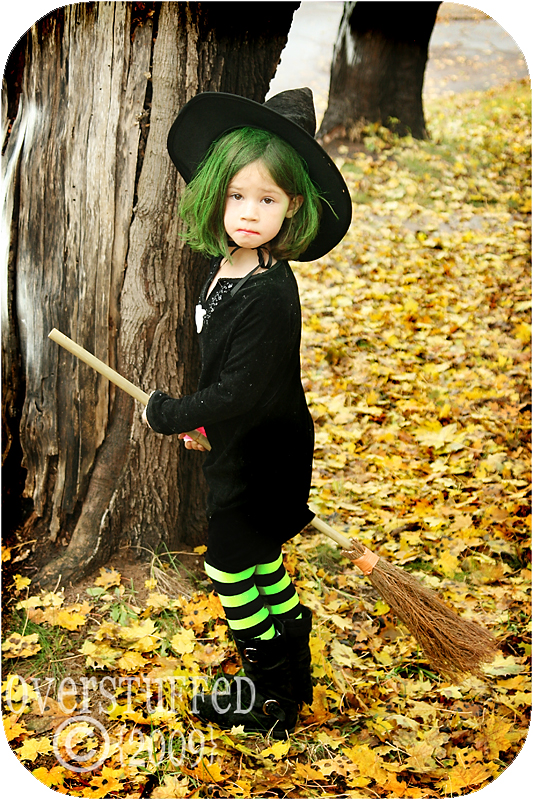 It wasn’t very long and witchy looking, though. So, we got her some striped witch tights to wear with her black boots and she stuck a foam ghost sticker on it. And then it was perfect. 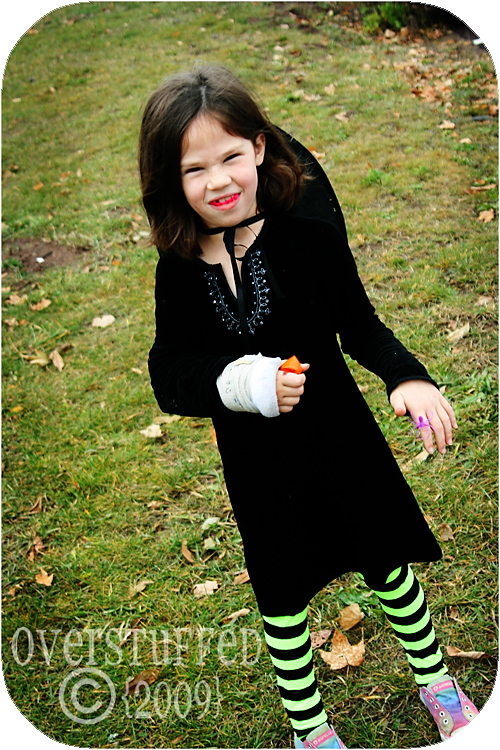 Earlier on Friday afternoon, I had to take her in to the doctor to get her wrist checked out.  I was so stupid to schedule it then, because she ended up missing most of her class Halloween party and the school costume parade.  I felt like a crummy mom even though her teacher managed to set her up with all the goodies before we left the school.

But, it was all cool.  The doctor decided that she needed a hardier cast, because her wrist hadn’t healed enough yet and because the splint was totally disgusting and manky.  Really gross.  I hurried and took a few pictures of her on the lawn in front of the doctor’s office because I realized I hadn’t taken any of the splint, and I had no idea what the doctor would decide.  She’s kind of half dressed for Halloween because of the school party, but she’d forgotten the boots and didn’t want green hair at school. 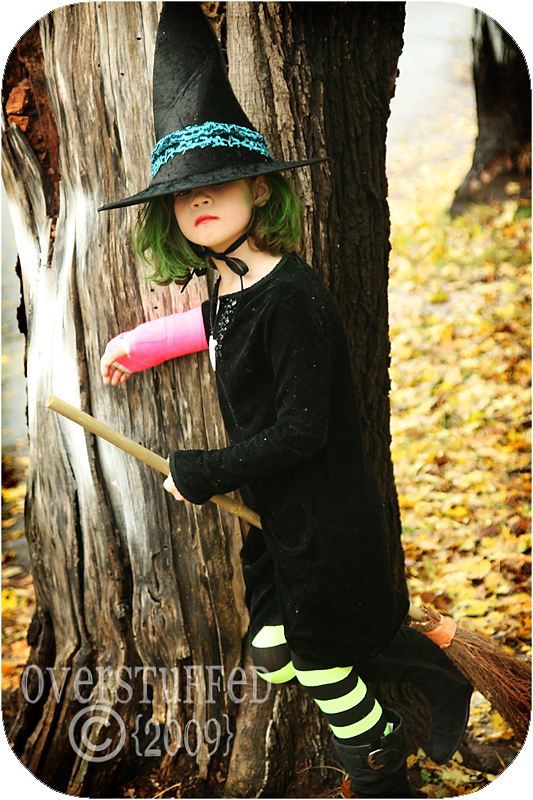 So, she got a fancy new Gortex cast. Chloe loves it because it is pink. I love it because it can get wet! Why didn’t the Urgent Care just do one of these in the first place?  It was totally worth missing the Halloween party for.

When we were planning out her costume in the days leading up to Halloween Chloe said, “I think everybody knew I would decide to be a witch this year.” 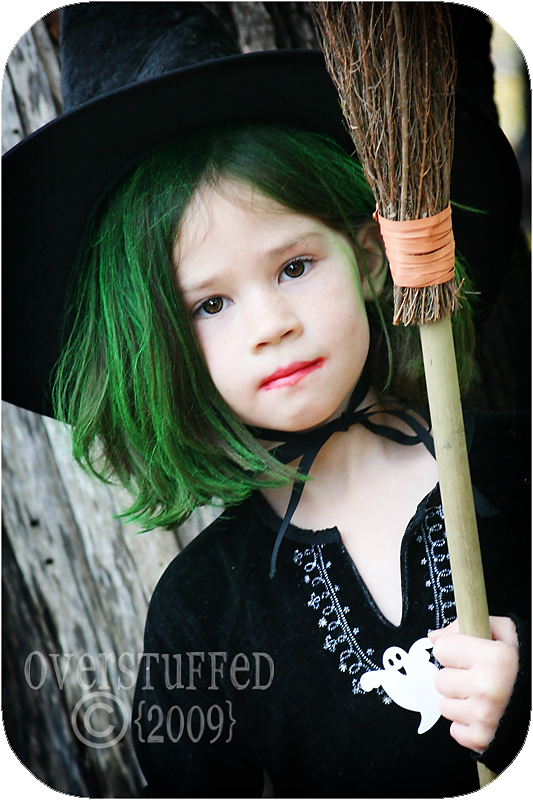 I’ll just have to take her word for it, because I’m not sure how a witch this cute could possibly be evil.

I really love this little girl. She is so amazing and like you said, just all around cute.

I love the tights, and her freckles. Love them! I didn't know they make waterproof casts. That is amazing! I have to agree with you. How could a witch that cute be evil?

Oh my goodness, that last photo of her! What a sweetie!

Nothing evil about that sweet face. Adorable costume!

What a face! Miss Chloe, the beautiful actress!

I think she is much more cute than evil!

She is sooo cute! Love the pictures. I hope her arm heals quickly.

Just a quick note to let you know I am moving my blog to rebeccairvine.blogspot.com

To continue to follow me you will need switch over in your blog reader. Thanks!

I love those tights! And her evil cute little smile. 🙂

I hope her wrist will heal quickly.

Being a witch must have been the thing for six year old girls this year. 🙂

I love the green hair!

I totally forgot about the broom for Zoie.

Goretex casts … wonderful – hope we never need one, but good to know! And seriously, not an ounce of evil in that girl!!! What a doll.

I love that she told you she's a "little bit evil"! So cute! And she is certainly a beautiful little witch 🙂

Cute and funny how can that combo possibly be evil? There is a little bit of Drama club showing in this girl isn't there. She really rocks her costume!

Those TIGHTS! I love them. Do they come in adult size?? Because I would wear them all the time!

Both you and Chloe get an A+ for the witch costume. Super fun, super creative!

I love those gortex casts too. Really saves my hind end when it comes to bath time!

She is so stinking cute! Pink cast and all.

Chloe, is apparently unaware that we are ALL a bit evil sometimes. 🙂

OMG I love those tights and the green hair. Oh… and definately all of her cute facial expressions. She made the most perfect, cutest witch ever. That pink cast is awesome!!!

There was a costume parade at the school?!! LUCKY!!!!!!!! It SUCKS around here. Seriously. For a state that is bottom of the barrel education, for AZ to screw over Halloween is just adding insult to injury. LOVE the green tights. The hair and tights are my favorite.

She looks awesome, way to do all your costumes on the fly. Your kids are lucky to have such a great mom. I think sometimes I get stuck in the we already made plans and this is what we are doing mode, that I forget to let little princess be a kid and change her mind.