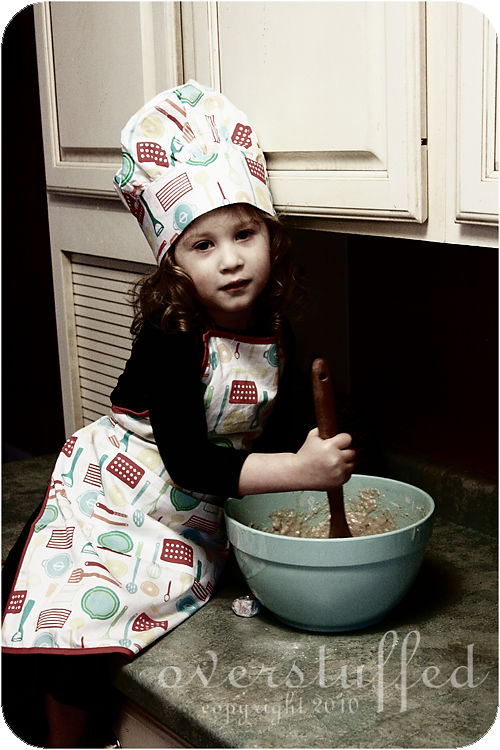 Today Sophia and I made spelt banana bread.  I thought I’d try using the spelt in my favorite banana bread recipe, since the last time I tried doing spelt (yeast) bread it was a spectacular failure.  I basically ended up with a giant bread bowl, it fell so much.  It tasted good, though.  I rather like spelt, so that’s good news.

Sophia loves to help me cook.  Not that I do it all that often, but when I do, she is right there wanting to do every bit of it herself.  Maybe she’ll grow up to be Martha Stewart or Rachael Ray or somebody like that.  And she’ll have her dad to thank for it.  But I do make banana bread sometimes, so it’s not like I don’t contribute to her baking education. 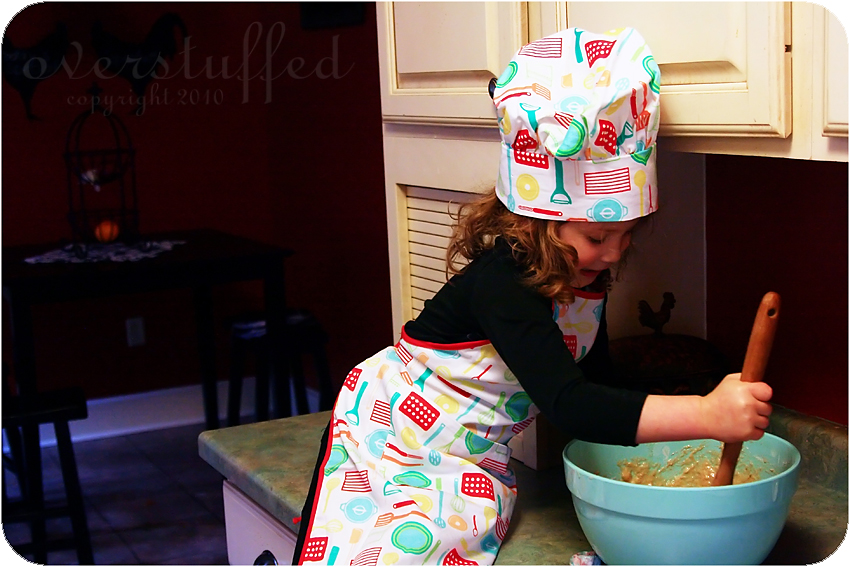 She is especially good at stirring up the ingredients.  I hardly helped her this time.  I measured them, and that was about it.  It took all of her self-control to even let me measure them, too.  That’s how badly she wants to do everything herself.  Sometimes I go into the kitchen and find interesting “soup” that she has made for me.  The last one consisted of pickle juice, unpopped popcorn kernels and olives.  Maybe she won’t be Martha Stewart, after all. 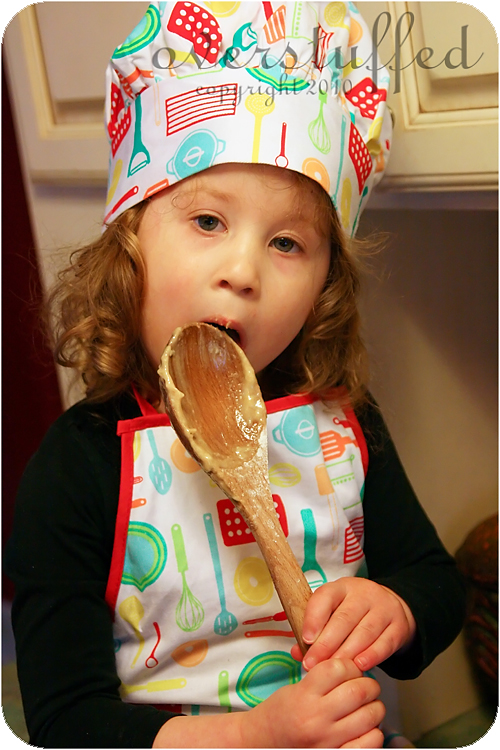 But she does know the best part of baking is licking the spoon after the bread is in the oven!  This is something we don’t take lightly in our kitchen.

Oh, and the spelt banana bread worked out pretty well, thanks.  Here’s the recipe I used (and if you don’t want to use spelt flour, it works wonderfully with the good old all-purpose kind, too):

Preheat oven to 350.  With a wooden spoon, mix butter into the mashed bananas in a large mixing bowl. Mix in the sugar, egg, and vanilla.  Sprinkle the baking soda and salt over the mixture and mix in.  Add the flour and mix.  Pour mixture into a buttered 4×8 loaf pan and bake for 50 minutes.

Bread sounds delish. The soup sounds disgusting…she may not be Martha Stewart, but she certainly looks ADORABLE trying.

Oh by the way you won the canvas. congrats!!!

I've always wanted to try cooking with spelt. I could start with your banana bread recipe.

Good for you to have the patience to let her stir and virtually make everything (how big is the mess?) I'm so impatient sometimes.

And I'm glad the bread was good!

She is so very cute! Thanks for your comment on my Sophia. As for the name, I fell in love with the name after I started reading your blog. And I always swore to never name my child a common name as my name is quite common for my age group. I remember reading your post in 2008 (I think) about Sophia being one of the top 5 baby names for that year. Oh well! It is still a beautiful name! Hope she doesn't hate me for it later.

It is so fun to have a child with different coloring like that, especially when the brunette-ness and the brown eye-ness usually dominates. My redhead "stirs things up" around here too (bad pun?).

OK, may I just say that I loved that first picture? It looks like it could be the cover of a kids cookbook or magazine or something.

We've got bakers here as well. Elizabeth can just about bake whatever she wants now and when I ask Sariah what she wants to be when she grows up, she replies, "A mommy, an artist and a cook like Mommy." I love her!

Love that apron & hat on your little chef!

We grew up fighting over the spoon. And now? My kids all want it, too…

PS: I made homemade banana cake balls (a la Bakerella blog) the other week for my 3 yr olds bday. They turned out OK. I'd like to try your recipe now!