We have been neck-deep in home improvement projects for the last month or so.  After the opera was over, I was bound and determined to finish my dining room.  And then once that was done, the momentum pushed me forward to do Sophia’s room.  I can’t tell you how wonderful it feels to have these two rooms done, because I’m pretty sure once school starts I won’t be able to find that kind of time in my schedule.

Both rooms aren’t completely the way I’d like them.  But that takes more money and more time, so I’m happy with how they are for now.  And I guess I’ll stop waiting on the curtains or the bedspreads to show you how they turned out.  Consider it phase one.  And for that matter, I suppose I’ll finally show you the kitchen we did nearly a year ago, too!  So, hopefully you don’t mind seeing a lot of room redos on this blog in the near future!

So here is what Sophia’s bedroom looked like before.  Or, actually, kind of in between.  After we’d tried stripping the wallpaper without a steamer, and before my amazing friend Trisha came over with her steamer and her elbow grease to help me. 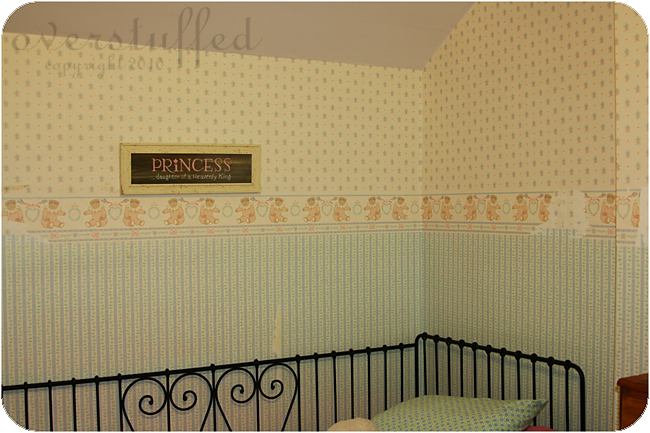 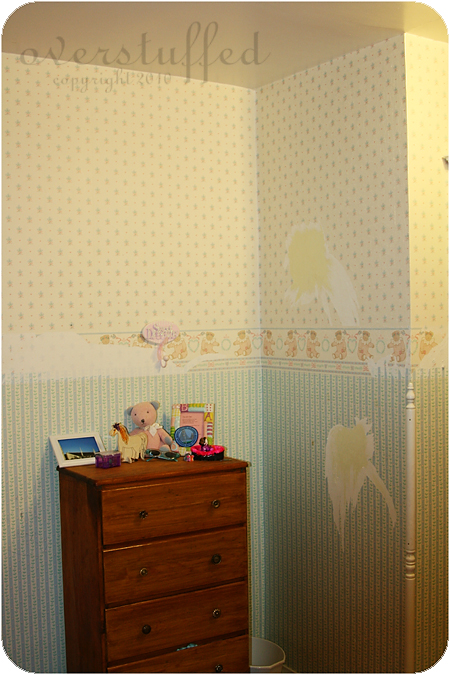 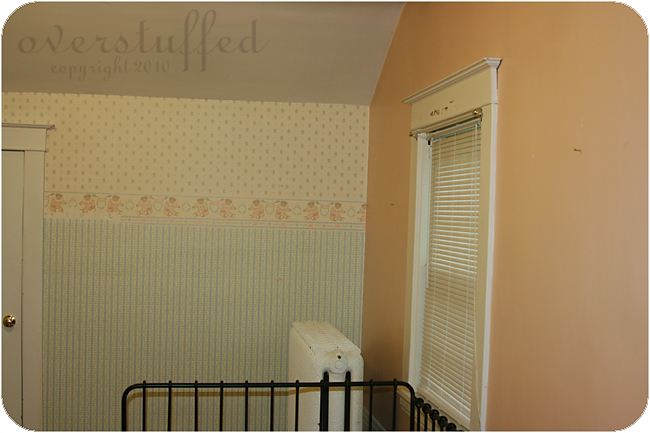 Sophia has been begging for a pink room forever.  So we went with kind of a candy pink that I really like.  (It’s called Panache Pink by Sherwin Williams, if you care.)  As I said before, I need new quilts on the bed.  I have a pretty specific idea in my head, so I imagine I’ll make some quilts and just tie them, since I’m hopeless at the quilting part. 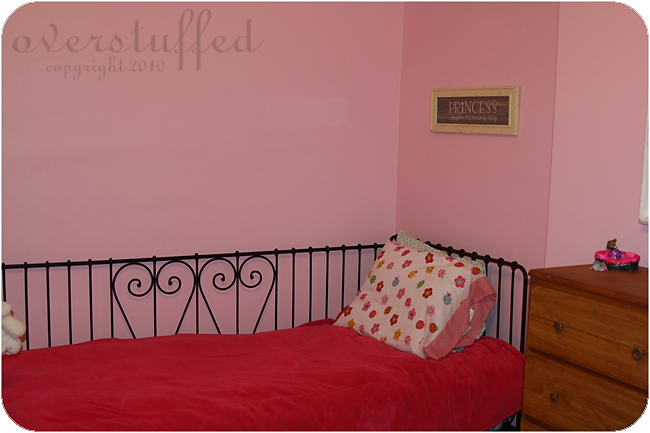 I found the table at Goodwill for $5.99.  It was originally Disney Princesses, and in pretty bad shape.  So, I repainted it to match the room. 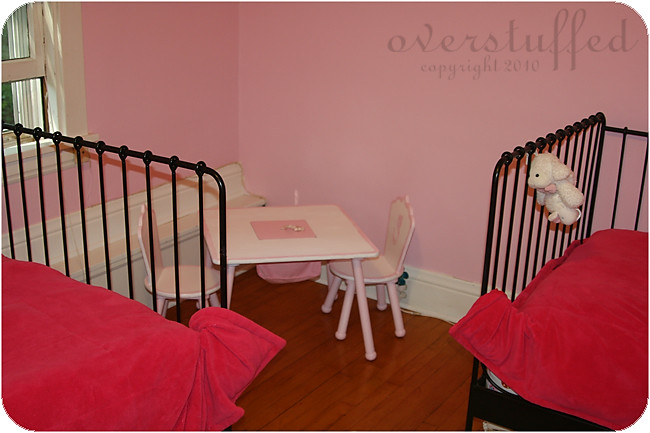 The room already had blinds (the only room in my house that did), so I just made these valances.  They just might be my favorite part of the whole thing.  I had the idea to just do the curtains like I made their Halloween tutus a few years back and just cut strips of tulle and tied them right onto the curtain rod.  Turned out so cute! (At least, I think so.) 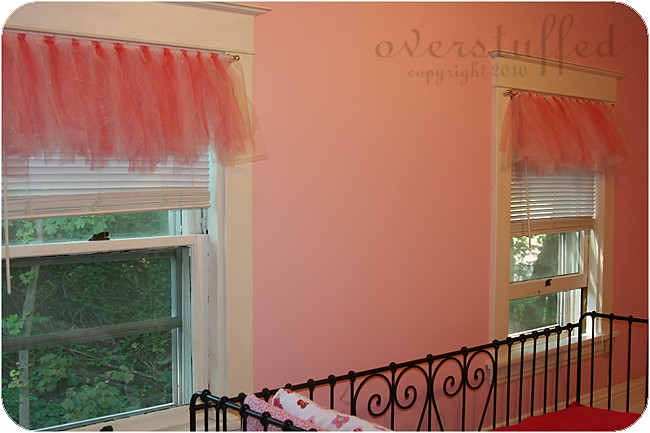 This rocking chair is the same one I was rocked to sleep in by my mother as a baby.  And all my brothers.  And now, all of my children.  It was stained a really dark brown before, so I painted it white.  I’m still debating on whether or not to sand and distress it.  We’ll see.  The shelf was purchased at Goodwill for a couple bucks and then painted white.  The frames were also purchased at Goodwill for cheap.  I like the darker coral (which I also used in the tutu curtains) as a contrast to the candy pink.  I already had the rose in my crafty stash and the little Good Night hook has been hanging in her room forever.  I just tied a piece of ric-rac to it to tie it in. 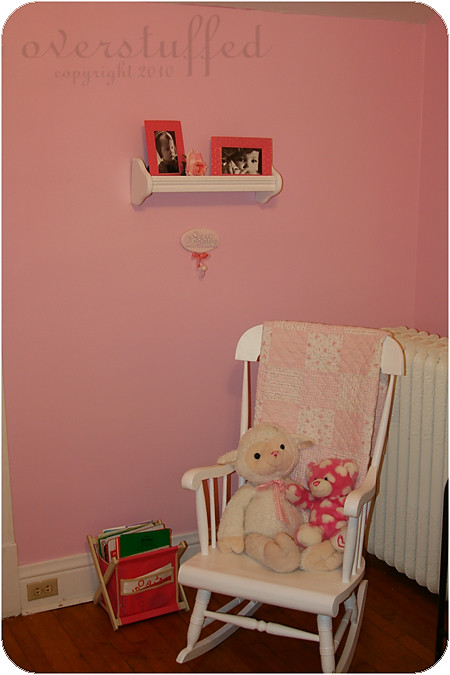 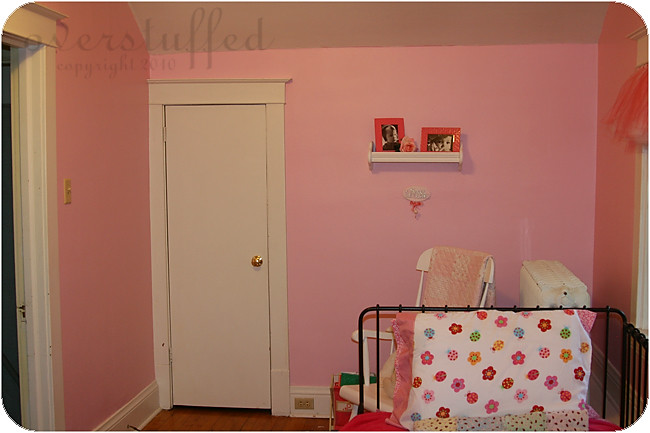 The mirror came from–you guessed it–Goodwill.  I painted and sanded it.  The lamp came from a garage sale for a dollar, and was green to begin with.  I sprayed it pink and bought a new shade at WalMart.  Then I glued the ric-rac trim on.  Sophia painted the little cat.  She got it for her birthday. 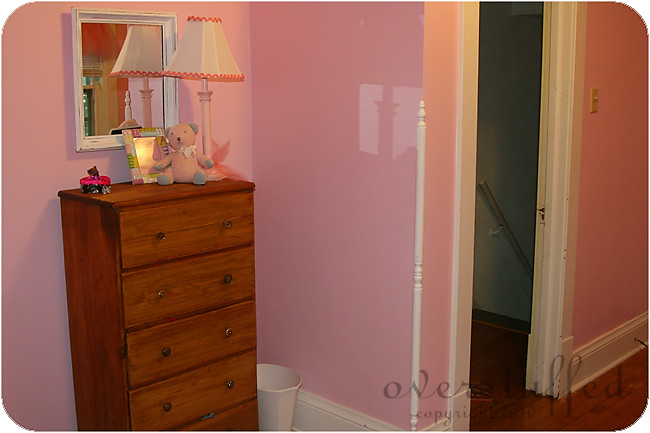 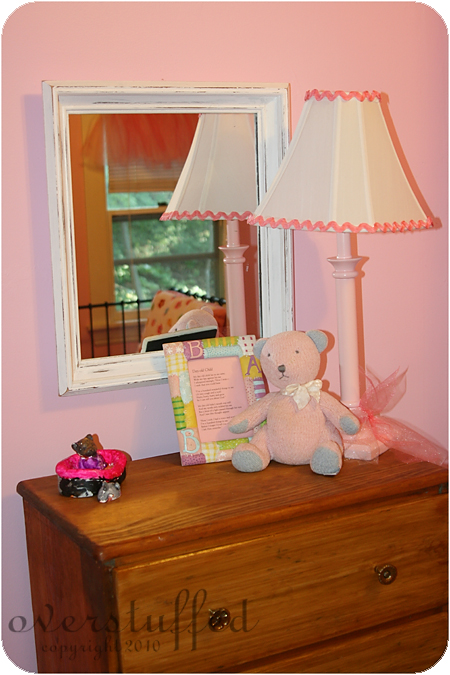 Sophia loves, loves, LOVES the room.  It is so fun to see her so excited and to feel so special.

Now we’ll see if it will actually help her to sleep in her room!

Write the Right Words
Next Post: What We Have

Please keep posting the re-do photos…I like your ideas.

You have been busy! And I am in love with the curtains! What a fun room, and I think I would be excited if it were mine as well. I say distress the rocking chair. The mirror is, so it will tie it together, right? 🙂

Paint sure works wonders! I love it. And the valances are GREAT!!! I don't know what to do with the girls' room. We've never been sure how long we'll be living here, so I've hesitated to change the wall color. (It's just white now.) I'm going to make triple bunks for the girls for Christmas.

well, that's pretty amazing! for sure she loves it: it's more than wonderful and fit for a princess, indeed :)!

I love love LOVE those CURTAINS! PURE GENIUS! (Yes, I'm shouting) I love the room. It's so gorgeous.

Very sweet! I love those valances.

I'm totally in remodeling mode too so this is fun to see. 🙂

That is so darn cute! I would have loved that room when I was a little girl.

love this!!! way to go! i also am in LOVE with the curtains. you are one talented lady!

Fun, fun, fun! I love the tutu valances and the color on the walls!

love the tutu curtains…might have to grab that one for my daughters' room.

It looks great! And I love, love, love the curtains! What a great idea!

What a gorgeous room! You make all the work sound so straightforward but I'm pretty convinced I couldn't begin to THINK any of that up, let alone DO it. It's just the kind of room every little girl needs:)

darling! I love pink! the girls must love love love going to bed and having a tea party in their new room! I love the tutu valances! What a wonderful idea especialy for a princess room and a little ballerina! I will have to passt this on to my daughter-in-law! 🙂

You have a real talent, my dear! Everything looks so nice. Great job!

Very cute! Getting wallpaper off is a ginormous pain! I have been doing the same thing you have and you've inspired me to post the 'after' pictures even though we're still in process too. I had thought I would wait but why wait?

You're such an inspiration! I'm sure it was a lot of work, but it looks like you just waved your magic wand and whipped up a masterpiece. I'm sure Sophia is just tickled pink…(sorry, couldn't resist). Great job!

Lara, you have a great decorating style! When I finally get around to doing something with my living room/dining room, guess who I'm going to call for pointers?

I LOVE it. You are so ambitious and creative. Hope your kids are enjoying the last days before school. Have a super day.

Oh my! Fit for a Princess indeed! I ADORE the tutu curtains!!! (not that i'll ever need them)