One of my goals this year was to become a better birthday party mom.  I have always been the type of mom who throws things together at the last minute, and my children’s birthday parties were never planned out very well.  I’d send out invitations according to whatever theme my child chose, then on the morning of the party I would realize I needed to actually plan something, run out and buy a pinata and some candy and then make up one or two games, and hurriedly make a cake.  At the party, once any games were exhausted and the pinata had been broken, we would open gifts and eat cake.  And then there would usually be an hour left of the scheduled time in which I would just let the kids go play.

That worked for a while, but my girls are getting a little older and they started asking for better parties.  Now, perhaps in my quest to simplify my life and embrace imperfection, doing a better birthday party doesn’t fit in.  But, it’s for my kids, and they are most important, so I vowed to put on a fabulous party for each of them, starting with Bria’s in October 2010

And I tried.  I planned more, but I still ended up doing everything the day of.  I guess that’s just how I work.  But I do think it was a smashing success… 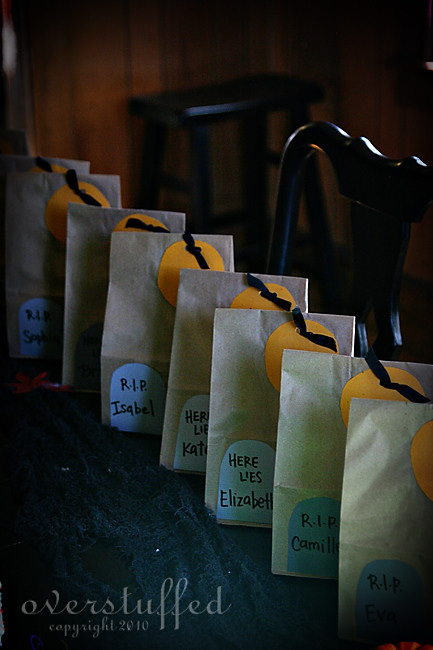 The favor bags, which mostly held little Halloween items and one piece of candy.  Also, a little sewing kit, which was what Bria really wanted them to have. They drew slips of paper at the end of the party that said either “Trick” or “Treat” on them.  If they got “Trick” then they had to do some sort of trick for me in order to get their favor bag, but if they got “Treat” I just gave it to them.  The kids loved this and all of them wanted to do a trick or two! 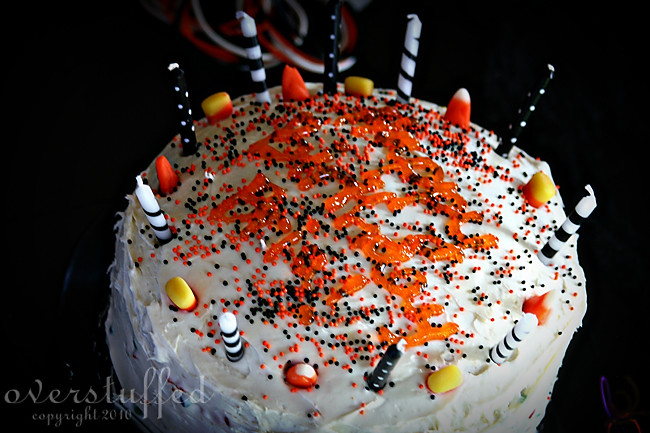 The cake.  I did better at actually planning it this year….I thought it would be fun to make it look kind of like a candy corn inside.  And I did my best to decorate it Halloweeny enough. 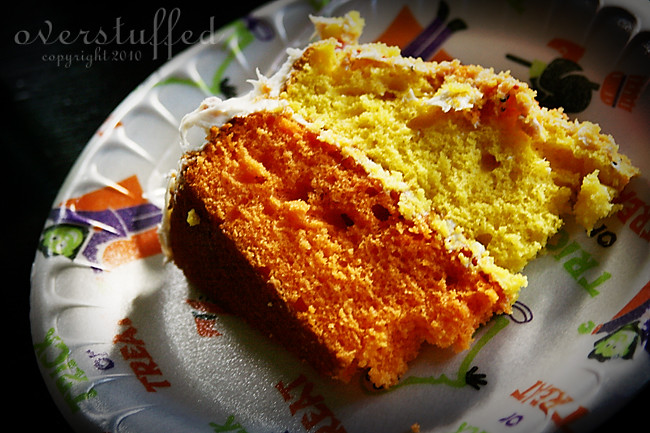 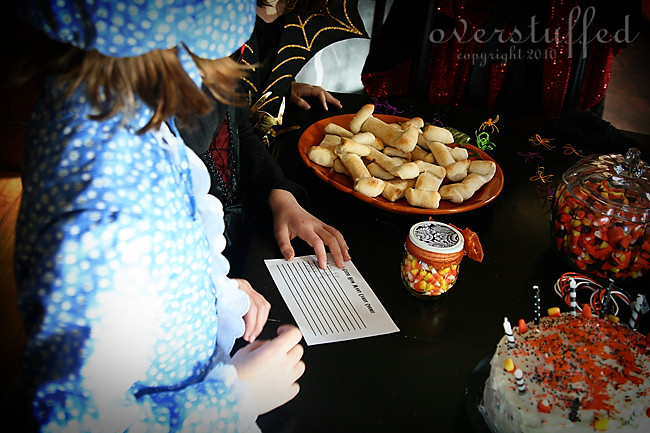 I made bone breadsticks, and spider juice (didn’t get a picture) along with the cake.  We also played a “guess how much candy” is in the jar game and did a few fun Halloween crafts (didn’t get pictures of those, either) 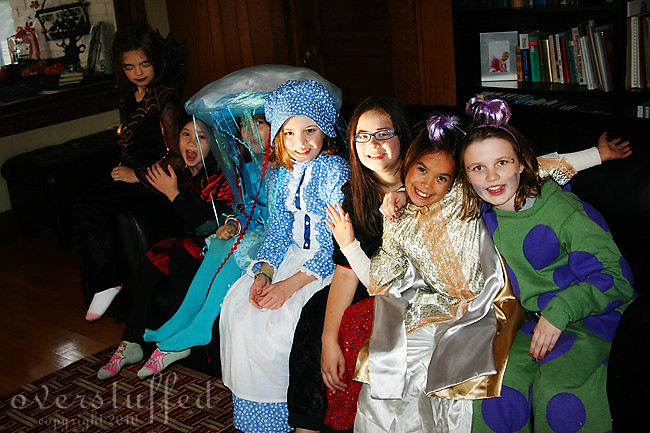 The girls all wore their Halloween costumes, and we had a costume contest.  The winners?  The vampires tied for scariest (prize went to Bria’s friend), the jellyfish for cutest and the alien for silliest. 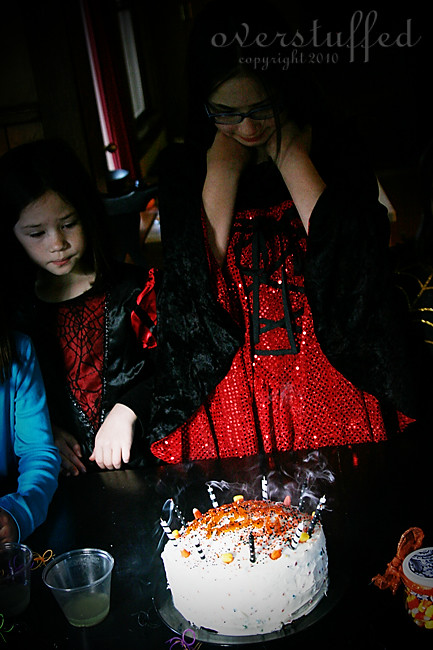 The obligatory blowing out candles picture.

When all was said and done, I only had to make up games for about 20 minutes of the 2 hours the party was planned.  Who knew making two Halloween crafts and playing about 6 games would only take an hour?  Sheesh!  But, I think I did eons better and that this is the best birthday party I’ve planned since Bria turned 3 and I went all out on a Wiggles party for her.

I'd sayyou did really well! Love it! What a great time of year all your girls have their birthdays!! So creative.

When I have kids, they're not gonna get to see your blog cuz I don't I'll have the energy/creativity to do something like that.

I think you did GREAT!

You. are the coolest mom evah. Except that you are not responding to my IM's right now.
Fired.

Very clever. You should hire yourself out.

You make my b-day parties look like homegrown chaos. 😉 Seriously, what an excellent, thoughtful mommy you are, Lara. I'm constantly softened and humbled by your goodness.

That is a fabulous party! Lucky Bria! I always find that the 2 hours flies by usually, but it is awkward if there is extra time. But, for us, being all boys, they just run around wild. It can get out of hand if I don't have structure.

The cake is adorable! You ARE the ultimate party mama 🙂

wow, that's a pretty stinkin' awesome party! you have nothing to worry about, you're doing GREAT!

What a FUN party! My daughter's first is coming up… will you plan it for me? I hate planning parties. Seriously. You did a smashing job, and that cake is making me drool just a little. It looks so good!

Okay, you can now check Awesome Birthday Mom off your list….

I am just laughing because I went to your blog after trying to plan out Owen's birthday which is November 15 and I just ordered the invitations on Thursday for a party which is going to happen this coming Friday. I always have these grand plans to be an awesome birthday party mom too, but I am not very good at it. I do think your party looks awesome though.

That turned out SO cute. I especially love the cake. Amazing job, as always.

COMPLETELY AWESOME. Especially the candy corn cake. Oh, my. I'm a Halloween birthday girl myself, so I always used to have costume parties…Bria's a lucky girl!