Home » travel » Belize: How a Baboon Pooped on My Head and Other Adventures 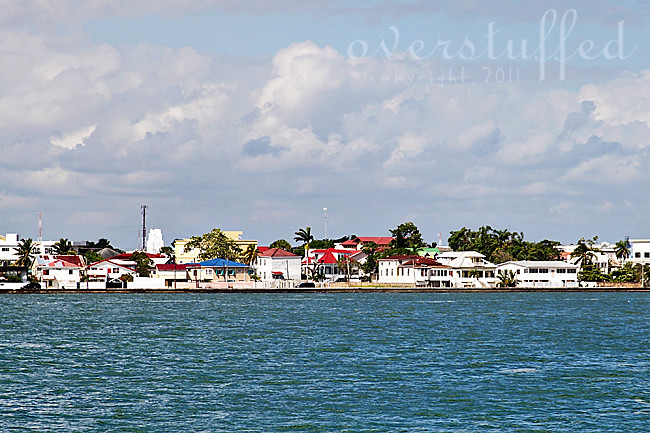 Our second port was Belize. 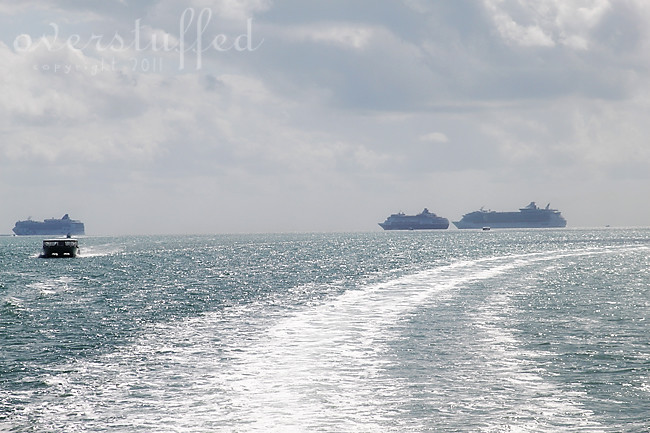 We took the tender boats into shore this time.  The kids thought it was a blast to ride on the smaller boat, and it was quite the ride, too.  I think it took us 15 or 20 minutes to get to shore.  Joel, on the other hand, doesn’t seem so thrilled with the adventure, does he? 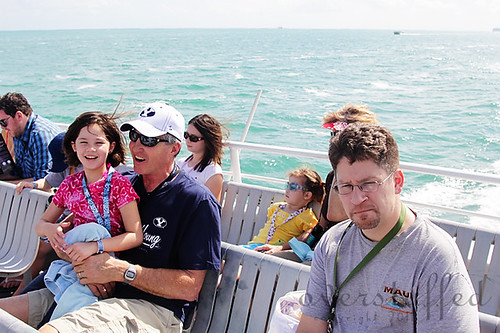 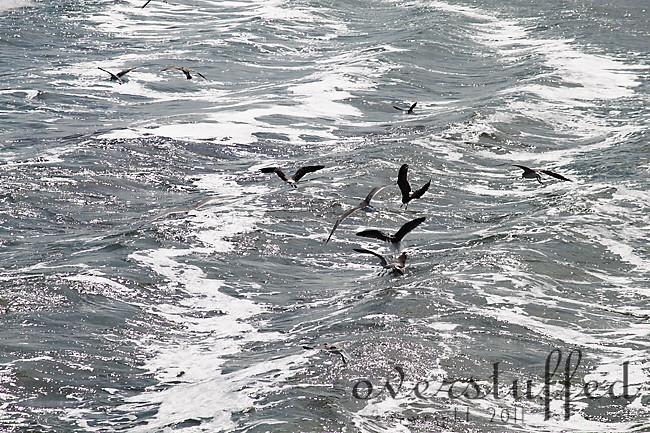 And this child just slays me.  It’s like she was meant to live her life in the lap of luxury, hanging out on yachts and sailboats in the Caribbean.  I crack up whenever I look at this picture. 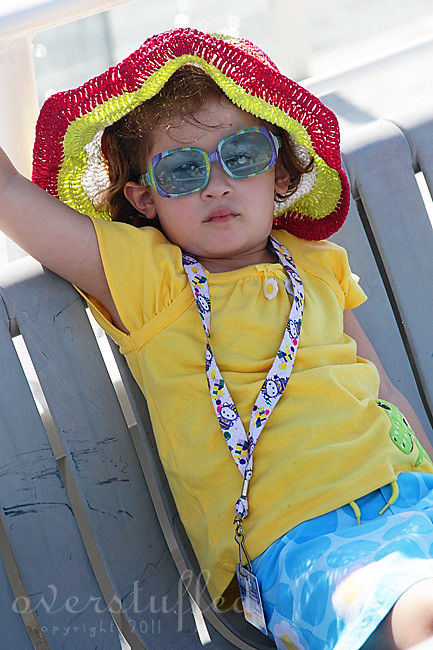 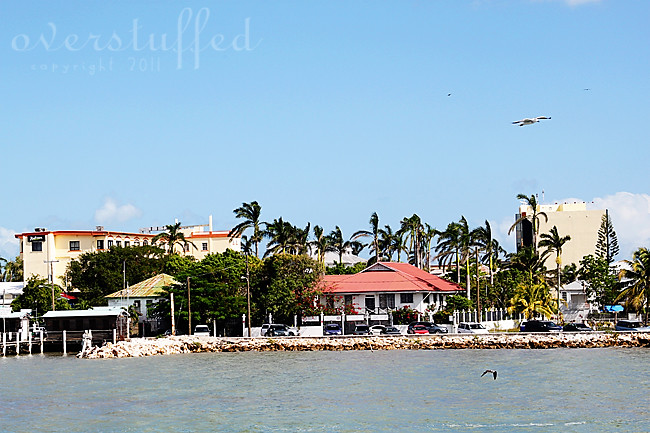 Once in Belize City, there wasn’t a whole ton to do, so we checked out all the little shops.  It seems The Pharmacy Where You Have No Need of Prescriptions was quite popular, and now I’m kicking myself for not getting a cheap inhaler at least.  But, I wasn’t sure if I should trust it.  I’m still not, actually.  Forget I said anything.

While others were shopping, we hung out around the shops.  Chloe and Tychon had fun playing hand jive games.  Tychon was such a good sport to let Chloe teach him all her girlie games. 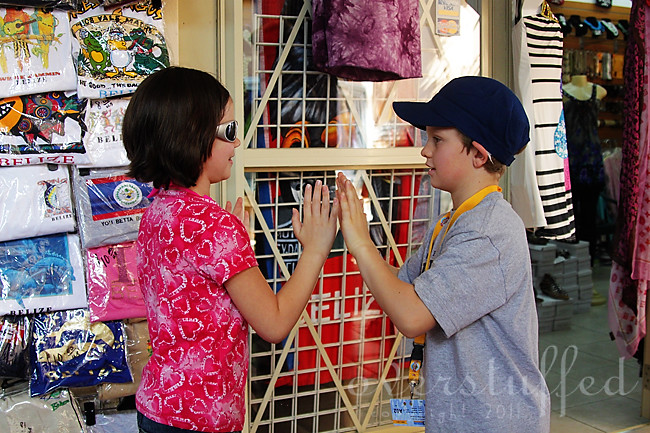 I think Joel was pretty bored with the whole shopping thing. 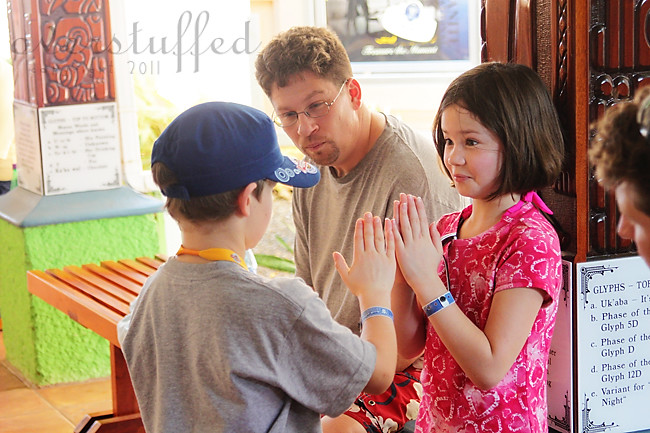 Although, I have no idea why, because there were lizards to be caught… 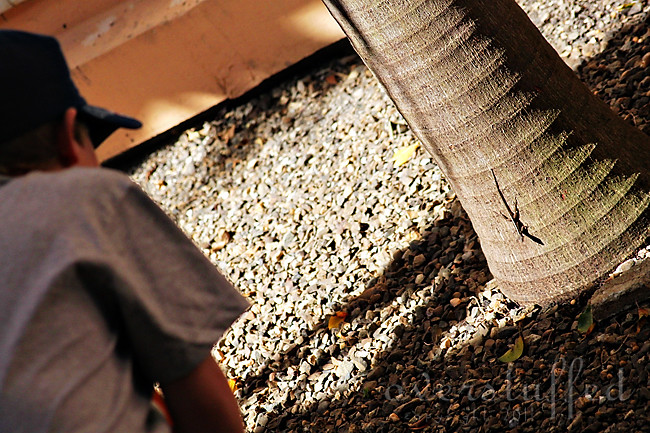 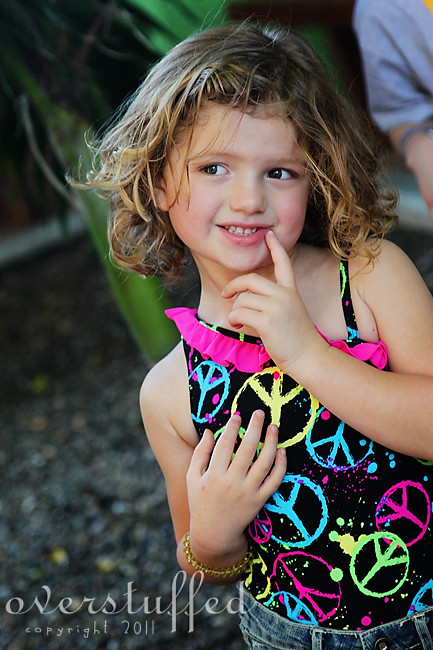 …and Christmas decorations to admire (I must admit, it was jarring to notice all the Christmas decor whilst in such a tropical environment–every time I had to remind myself that yes, Christmas really was just one week ago!). 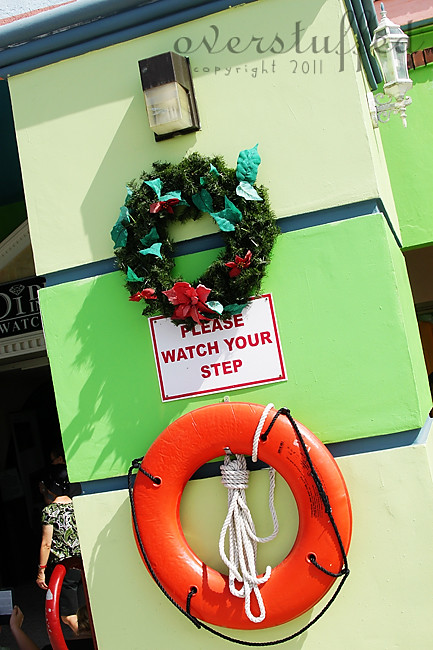 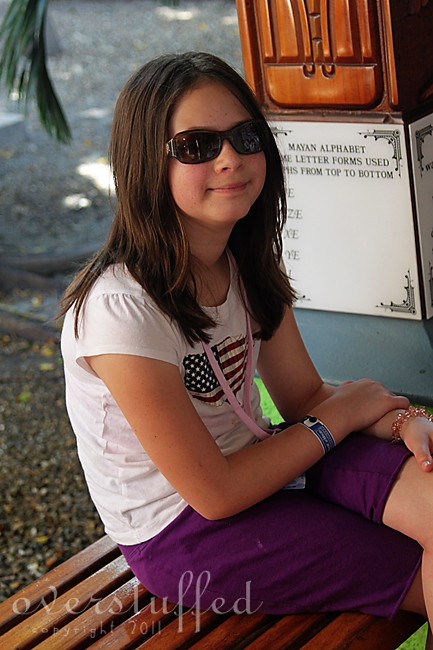 As fun as shopping can be, we only have so much money and so much need for souvenirs.  Everybody pretty much decided it was time to get back on the boat, except my brother Nate, his wife Brittany, Chloe and me.  We went on an excursion to see baboons.

First, we had to take a ride in a taxi cab that was probably 20 years old and had no seatbelts.  It was about a 40 minute drive out to the preserve and Chloe got herself a good nap on the way.

The drive was worth it, though.  The preserve was more like The Garden of Eden. 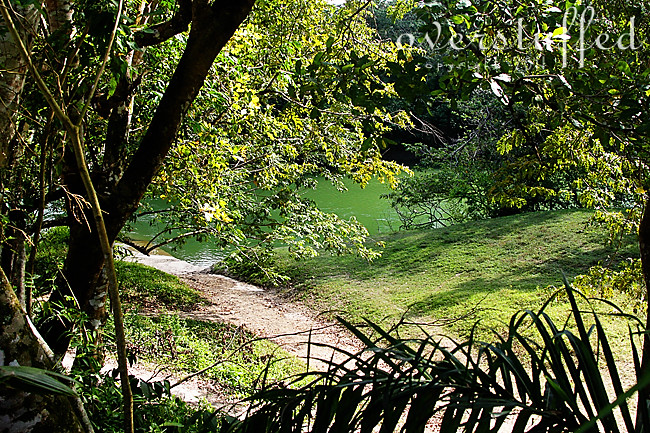 It is run by a group of Belizian Rastafarians who live right on the preserve.  They bathe right in that river and they sleep in huts they built themselves.  I was most amazed to learn that none of them even wear shoes–especially as they were showing us all of the various poisonous plants in the area. 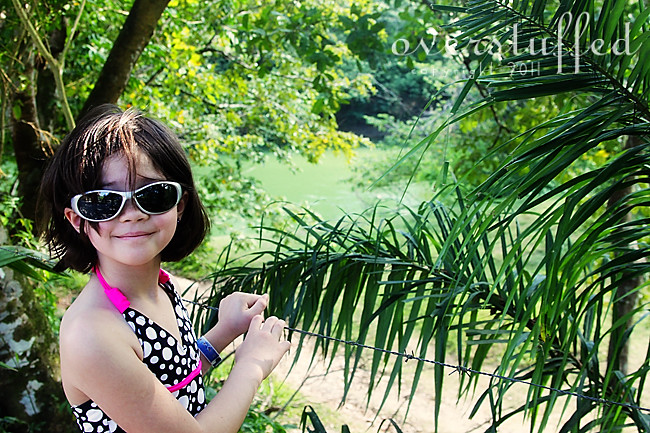 We got some lessons in baboonology and a lovely tour of the jungle.  Of course, you’re never sure if you’re going to be lucky enough to actually see the baboons, but we were hopeful.  Apparently, there is one particular family of baboons that has become trusting of the humans.  The family consisted of a male, his two female mates and their five offspring: all male, the youngest of which was only a few months old. 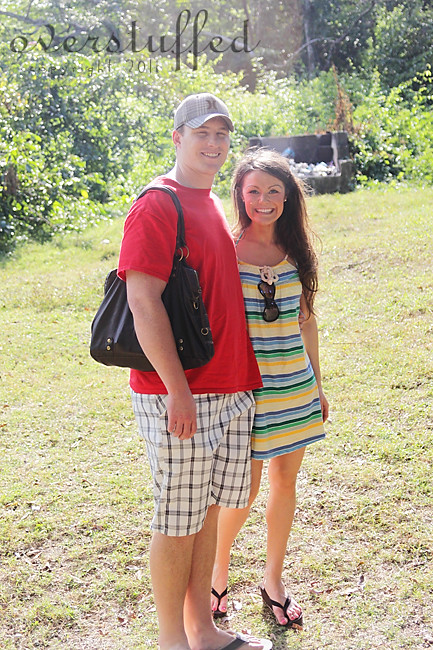 And we were very, very lucky.  Of course, I was the luckiest of all, but we’ll get to that later.

We heard the monkeys before we saw them, and then, before we could blink, there was a monkey making his way down to us, and his tiny little baby brother following.  Even the preserve owners were shocked about this, because the baby hadn’t ever come down that far before.  He was so adorable to watch–just like a baby learning to crawl or walk, his swinging from branch to branch was uncoordinated and wobbly and oh so cute. 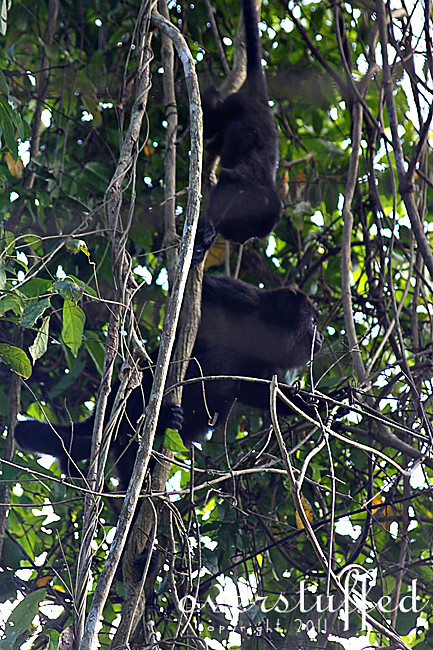 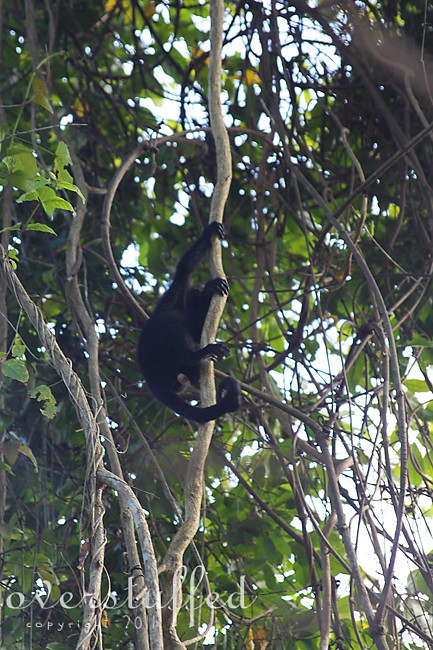 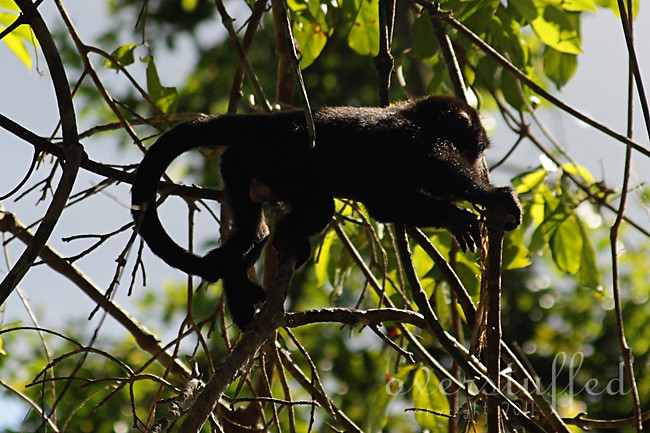 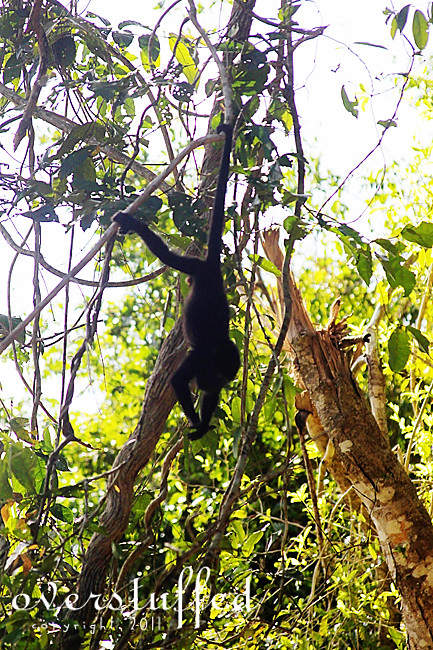 The baby didn’t come all the way down, but his big brother certainly did.  He wanted a treat! 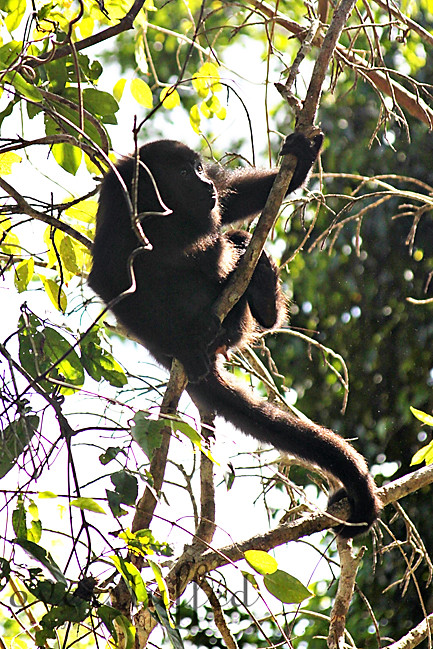 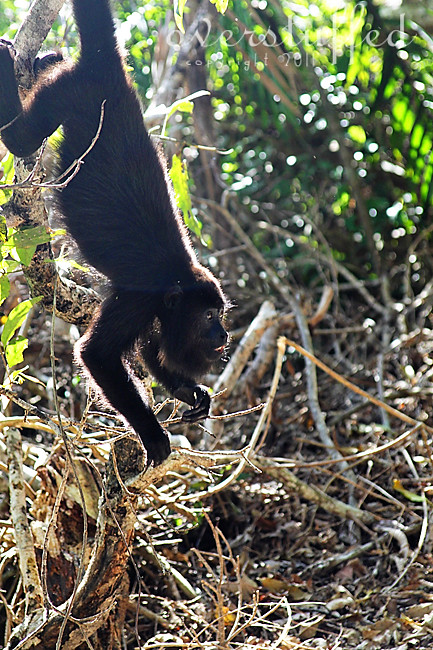 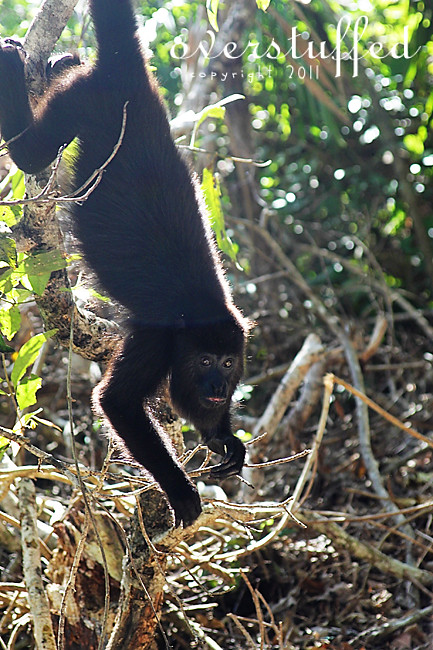 And so a treat he got.  There were about 10 of us in the tour group, and we each got to have a turn feeding him a piece of banana.  We put it in the palm of our hand, held it out to him (with the help of the Rastafarian dude) and he would grab our hands with his little monkey fingers and gobble it up.  It was truly an amazing experience.  Chloe was thrilled, even though you can’t really tell that she actually fed the baboon because I was so excited watching her that I forgot to take a picture until it was over.  But you can tell she was excited about it. 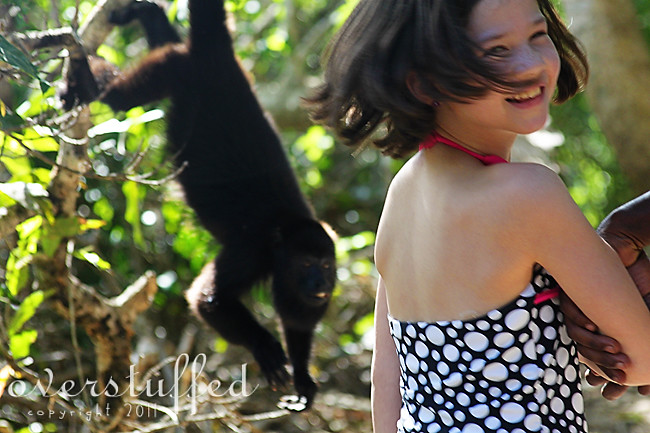 My brother Nate was the last person to get to feed him, and so he got to feed him about five times so he could finish off the banana.  This is a good shot of how the monkey grabs your hand to take the food. 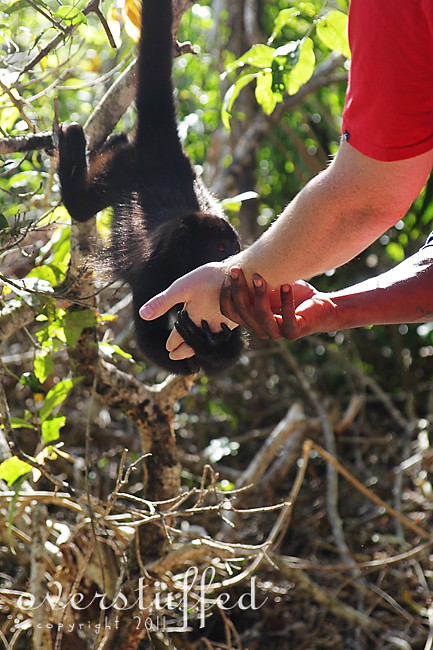 There’s not much in the world that can beat feeding a wild baboon, until it decides to poop on your head.  I was just standing there, innocently taking pictures of the monkeys after they’d gone back up into the trees, when I felt quite the thud on my head.  At first, I thought the guy next to me had hit me with his camera (yes, that’s how it felt!), but then the Rastafarian dude started telling the monkey he had no manners, and I realized what had happened.  Nate verified that my hair was indeed, um, soiled. 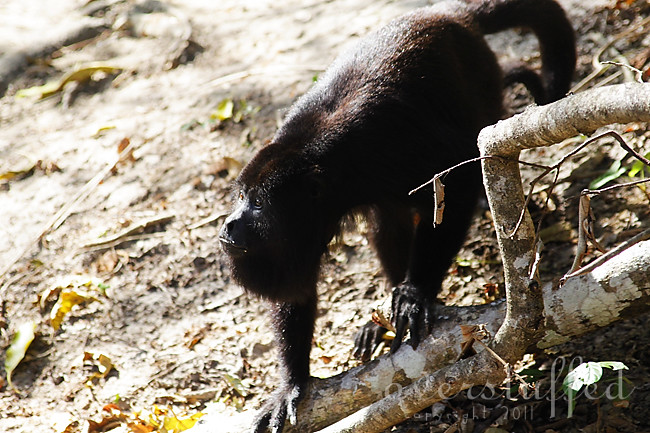 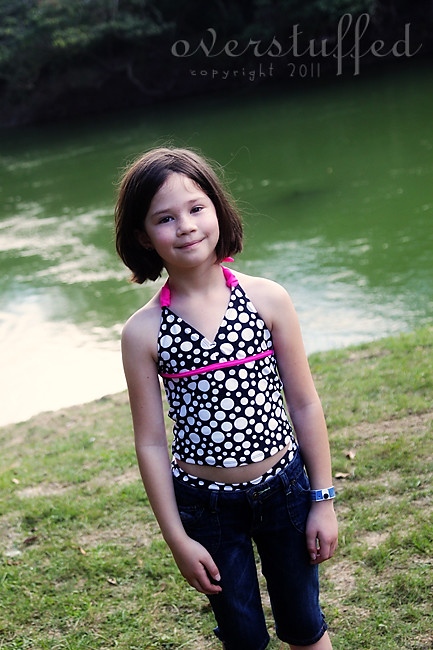 And that’s about it for Belize!  We barely made it back to shore in time to jump on the tender and be on the ship for all aboard.  But the tight timetable was totally worth it, even though I was late to dinner due to an unplanned shower.  After all, not many people can say that a wild baboon pooped on their head in Belize.

The photos are beautiful, the kids are darling, looks like a wonderful time. So much fun!

What, no pictures of the "incident"? Great story!

What Andrea said. And, that photo cracks me up too! What cute kids you have!

Lara, I'm sure your Romanian taxi skills just kicked in on that taxi ride! 🙂

Hilarious story, Lara, the monkeys are definitely characters–I think my brother Donny is still scarred from being attacked by one in Guatemala!

I am so disappointed that there is no photographic evidence of the baboon-doo hairdo.

Those pix remind me so much of Puerto Rico.

LOL, nice!
And your pictures are amazing! I'm so jealous!

lol, wow. Only a woman of infinite confidence and knowledge of her own value would see being pooped on by a baboon as a sign of good fortune. Bravo Lara, Bravo.

What a good sport your were. I am not so sure that I would have been. Great pictures too.

awesome pictures 🙂 your daughters are SO cute!

Thanks for sharing. At least I can live vicariously thorough you. AMAZING!

hahahaha! That is hilarious! Maybe not at the time, but a great memory. Gorgeous pictures and I was laughing so hard at the one of Sophie! Your description of her was so perfect & fitting to her expression. Love it!!

Oh, man! The most interesting animal that's ever pooped on me is a pigeon. I think you *are* going to be lucky for the rest of your life—you need at least some compensation for that!

And I can't believe you once wrote that you thought you were boring. You get a gold medal in "interesting life" for this story!

We are headed to Belize next Feb. Thanks for the Baboon heads up.

What a beautiful place! They should sell those little umbrella hats for situations like that.

What great photos. I am very envious. Well, not of the poop but of everything else:)

What a great thing to add to your list of lifetime firsts! (And hopefully lasts, at least as far as the poo goes…)

I LOVE Belize! What a great trip! (Except for the poop, of course!)

Am laughing so hard. SO HARD that I am choking.

Either you cleaned up the story, or you were very calm about the poop thing. I think I'd have had a little fit right there.

I definitely think you get the good luck for life award. Still… how cool is that?

You are seriously lucky! Chosen, I would say. What an adventure, what cute baboons and what great shots of your own little baboons, too!

Hahahahha, oh my goodness, that is funny! and cool at the same time. 🙂

Love this blog, keep up the great work wish you all the best..