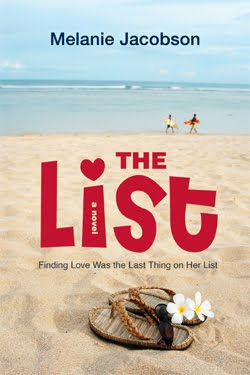 I think one of the most painful times of my entire life (and I mean painful as in painful/awkward, not painful/tragic, FYI) was the space between coming home from my mission and meeting my future husband.  Ugh.  I had sort of dated this one guy before I left, but I already had my papers in and stuff so it never got really serious, and we hardly wrote or anything.  Anyway, he asked me out two days after I got back and it was a really terrible date because I was probably the most boring person in the entire world, having just spent the prior 18 months doing nothing but teaching the Gospel in Romania.

When I met Joel, who was not desperate or slightly creepy, and with whom I had plenty in common and quite a spark, I think I breathed a rather large sigh of relief, because I knew that this was it.  No more of the college dating game!  I had absolutely no desire to ever, ever relive that portion of my life.  Ever.

Which is what makes Melanie Jacobson’s new book, The List, so fun to read.  We’ve all been there (and we are hopefully no longer there, but if we are, well, hopefully it will be over soon)(unless, of course, you don’t want it to be) and we can now look back and laugh.  And I did just that.  I laughed a lot while reading this book, because Melanie is funny (which, if you read her blog, you already know, and if you don’t, well, you should) and therefore her characters are rather witty, too.

Now, when Melanie asked me to review this book, she told me that it was pure fluff and entertainment.  That there would be no improving of minds or teaching of lessons.  While it was definitely a very fun read and I did laugh a lot (did I already mention that?) I have to say that she was a little bit wrong.  There was quite a bit of lesson teaching going on in this book.  For instance, there were surfing lessons taught, several cooking lessons (and I’m still dying to try the grilled cheese sandwich), and there were even a few life lessons, too.

But I can’t tell you what they are just now, because I do want you to read the book and see for yourself.  I will say that I have been inspired to start a “before I turn 40” list.  Completing it is probably a different story, but I’d like to try.

Now, if you want to read this book, you can buy it in book-form here and in Kindle-form here.

Also, because Melanie is just that cool, she’s been doing some pretty amazing giveaways surrounding this book release.  Alas and alack, I have missed most of them because I have been rather absent in blogland lately, but thelatest one is almost as cool as the Shabby Apple dresse I missed winning last week.  Go and enter!  You could even win the actual book, too.

Not sure if you want to read this book?  You can go to Melanie’s author websitehereand read the first chapter there.  And then you’ll like it so much that you’ll have to run out and buy it.

Great review, fun book, and I liked empathizing with your post-mission analysis. Oh, how I was there, and for too long.

Oh, I need to try the grilled cheese sandwich, too! I mostly loved my single days but admit I am glad they're over.

Reading it right now and loving it!

I just finished The List on Sunday and loved it!! A little snarky, but I love snark. Great review, too.

I finished the book last week and I really liked it. It was a great read. And she is very funny.

Hmmmm. that was a painful time. Dating was so much fun for me, but I think it is because I wasn't ever really looking for an eternal companion because I always knew I would serve a mission. Then I married my best friend. I know. Lucky. 🙂 The book sounds wonderful!

Oh, I really hated dating. It was just so awkward. Loved your review though and might just have to try this book!

I love her! This book looks great. Can't wait to read it.

As your partner in bawling on the bed because of our miserable lives, I have to agree that I never want to go back to that time. In fact I try to block it out of my memory completely.