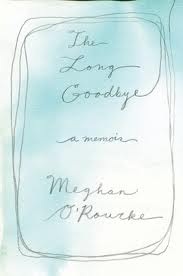 So, I was sitting in Time Out For Women on Friday night listening to Amanda Dickson talk about friendship.  For a moment, she was talking about her late mother and how much she missed her and then she said something about meeting people and being able to tell that they were members of The Club.  The Club of those who have lost their mothers.  The Club of those who understand what it is like to lose a mother.

I kind of gasped when she said that.  Partly because I have never once contemplated what it might feel like if my own mother were to pass away and partly because I had just read an almost identical sentence also referring to The Club in the book I am reviewing today: The Long Goodbye by Meghan O’Rourke.

Now, I must admit that I had a difficult time finishing this book.  Not because it wasn’t good (it was brilliantly written).  Not because I couldn’t get into it (perhaps I got a little too into it).  And not even because I didn’t like it (I liked it quite a lot, as I always enjoy a good memoir).  It was because I wasn’t in the mood to live in somebody’s grief–a grief I have admittedly never felt–so completely.

I think the first part of the book–the part that leads up to Meghan’s mother’s death–is slightly easier.  Meghan skillfully (and beautifully–she is poetic with words) shows us the person she was before her mother was diagnosed with cancer.  But that person begins to unravel as her mother goes through treatment after treatment, as Meghan’s marriage falls apart, as her mother finally enters hospice and succumbs to the cancer, and it is the last half of the book where we learn who Meghan is today and the journey she took to get there.  The journey that began with losing her mother.

My favorite quote from the book is one that took my breath away a little bit.  Because, although I cannot relate to losing my own mother, I could see within this one paragraph what that would mean.  She really hit it right on the nose, didn’t she?

While this book may be hard to read, Meghan has also done much research on death and grief, and it is very instructive–both to someone in the throes of grief and to someone who has never had to deal with a grief that comes with the loss of a parent.

I highly recommend it.  And I’m even giving away a copy to one of you, thanks to the generosity of the publisher.  Make a comment on this post, and I will draw for the winner next Thursday, April 21. (I will also remember this time to actually let you all know who wins.)

I received a copy of The Long Goodbye from the publisher via TLC Book Tours.

The Crazy Daze of Motherhood
Next Post: Dancing With Gravity

Wow – I am actually getting here before anyone else! Honestly, this is one club that no one wants to be in but our mothers would rather have us join this club – instead of the one for mother's who have lost children. I am sure it is a great book – but reading your post made me tear up – so it is not in my future. When my mother died I felt like the circle that was my life was broken beyond repair. I can say that as time as passed the circle has come back together. The thing I am saddest about is that she never got to hold our youngest child and the other two were very young when she died.

This post stirred up a lot of emotions for me. I can't say why, but emotions.

I think I may relate to this book very well. I would really like to read this one! Love you! MOM

I'm in the club. And that makes me unsure that I would want to read the book for that very reason.

I can't wait to read this book. I miss my mother so often, even though she has been gone for 11 years. Now I am saying a long goodbye to my father, who is an Alzheimers patient.

My girlfriends' mom died 6 years ago next week and it's still something that we talk about on a regular basis. It's not just a wound that heals up and goes away. I don't think I could handle reading it myself because I am so unprepared for the thought of it, but I'm going to recommend it to them.

Wow! I was just thinking about this topic the other day. How would I feel if and when my Mother passes? I was thinking about this not because my mother is sick or even close to being old enough to pass, but because I have had several friends lose their mothers recently.

I loved that quote from the book. I think she must have described it very well. I can't imagine life without my mother, so yes, it is unimaginable.

Thanks for sharing your review of this book. I look forward to winning a copy of it. 😀

SOunds like a book that my little Chloee will most def need when she is older since she now belongs to The Club.

And I love Amanda Dickson!

Reading the quote gave me chills. A very special friend who lived just down the street from me passed away 2 weeks ago of cancer, leaving behind two daughters and one son. I could not even begin to imagine, imaginable, losing my mother let alone losing her at the age of 22, 20, and 9.

I can't even imagine losing my mother. It will be very devistating for me when she passes. I loved the quote that you shared!!

Wow! I think about how hard it will be to lose my Mom, and wonder if I will survive.

Memories come and go during different times of the year which make me miss my mom more some days. One thing that I've struggled with lately is the fact that my daughter now has a daughter. I just can't help but think how much my mom would love her great-granddaughter. And, I'd love a 4 generation picture, but it wasn't meant to be.

I think I'll take a look at this book. Thanks for sharing it.

My mom is 80. It's just a matter of time, really. Not much of it, either. My dad is 84. He'll stick around til she's gone b/c that's the only thing he can really do for her (she prays constantly that she'll go first b/c she can't stand the thoght of losing him). I hate thinking about any of it for even one second.

I cannot imagine losing my Mom… she is 72 and had a heart scare a few weeks ago and I was bargaining anything and everything with Heavenly Father just to keep her here a bit longer.

My sister passed away 6 years ago from cancer and I really miss her, but when I look at her 6 children she left behind… my heart breaks.

I just had one of those long, heartfelt talks with my mom that I so often take for granted. I reflected after the phone call on how we never know when it will be our last time to see someone. So, I wrote her an email right away telling her that I loved her. I hope to make this a habit with all of my loved ones. Thanks for your post.

Great review- this subject is difficult but it sounds like the book is written exceptionally well. Thanks so much for being on the tour!