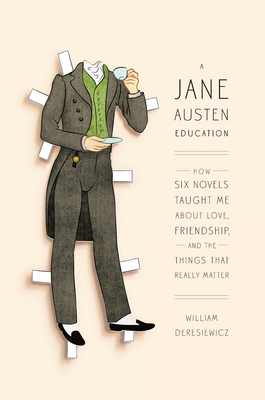 Like many of you, I love Jane Austen’s books.  I mean, I’ve read Pride and Prejudice so many times that I’ve lost count.  Now, my husband isn’t a reader of fiction–he prefers things like biographies and music text books– but even if he were, I highly doubt he’d be very willing to pick up any of Jane Austen’s works. After all, aren’t they the epitome of girly lit?  I have made him watch some of the movie adaptations with me, and he has enjoyed them, but I still don’t think that he’d pull them out on his own the way he does The Lord of the Rings.

William Deresiewicz, author of A Jane Austen Education, felt the exact same way.  A grad student of literature, he preferred to read more modern authors like James Joyce and William Faulkner.  He scoffed at the idea of Jane Austen’s novels being anything more than pure fluff.

And then he took a class centered around her works, and it changed his life.  This book is a memoir of the transformation that took place in Deresiewicz as each of Jane’s famous novels taught him valuable life lessons.

I love the way that Deresiewicz, formerly an English professor at Yale and now a book critic for The New York Times and other publications, combined telling the story of his life while simultaneously analyzing each of Austen’s works and teaching me the same lessons he learned from them.

Couldn’t put this book down.  And if you love Jane Austen as much as I do, you won’t be able to put it down either.  It has made me want to immediately reread all of the Austen novels. I’m excited to find the same lessons Deresiewicz found within their pages…so those are probably going on my (already too long) summer reading list as well.

I'll have to check this one out. I just started a novel yesterday called "My Jane Austen Summer." So far I'm not too impressed. Hopefully it will improve. But I'll have to get this on my to-read list, for sure!

Jane Austen from a male perspective?! I need to read this, and then somehow use it to make my hubby realize how great they are (Jane Austen novels) and read them himself. Hmmm. 🙂

Sounds great. Like other things I take an interest in, I have a habit of over-saturating myself with something I like until I overdose. I did that with Austen awhile back, but I am better now.

One time, years ago, I rented every single Elizabeth Taylor movie and watched them over the course of a long weekend (and a little into the week, if truth be told).

Thanks for pointing me to this one. I am keen to read it.
I used to be a huge fan of Jane Austen in my teenage years, but over time I started getting slightly annoyed with some of the characteristics of her female protagonists. Nevertheless, I still enjoy reading her books.

Oooh. Intriguing! A Jane Austen Guy Fan. I'm definitely reading this one. And then making my little sister read it too. We love Jane and I can always stand to learn more from her excellent books. =]

This is such a unique book, coming as it does from the male perspective. I'm so glad you enjoyed it!

Thanks for being on the tour.

Sounds interesting. Adding it to my evergrowing to-read list.

Oh, this sounds wonderful!! Thank you for the great review. I am so glad to hear about this book. Now I'm off to request it at my library.