Summer’s here.  At least, it is schedule-wise.  The weather has yet to prove itself, but it has given us a few nice days, anyway!

As for our summer schedule and activities, I decided to go a little easier on the kids this year.  Which means no math workbooks–at least not daily.  Or any others, for that matter. 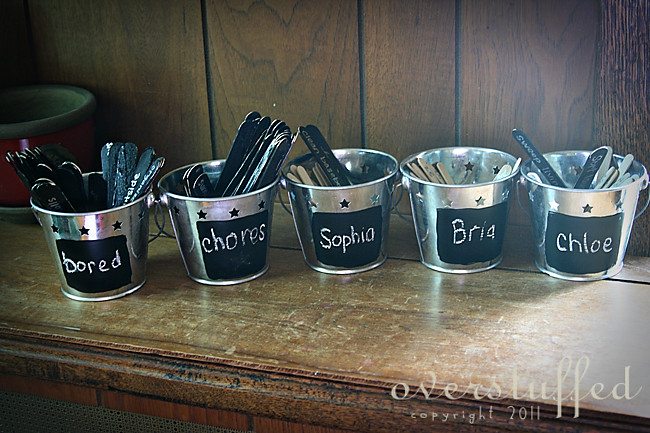 Instead, we have a chore system, where they are able to earn “American Girl Credits” for our trip to Chicago and the American Girl Place later this summer.  They each have to clean their room every morning and clean the playroom together, and then they draw two jobs out of the chore bucket.  These chores are things that need to be done on a weekly-ish basis, like mopping and vacuuming or watering plants.   If they do everything satisfactorily (we’re still working on that)(le sigh), they will earn the “American Girl Credits” which will translate into spending money once we’re in Chicago. 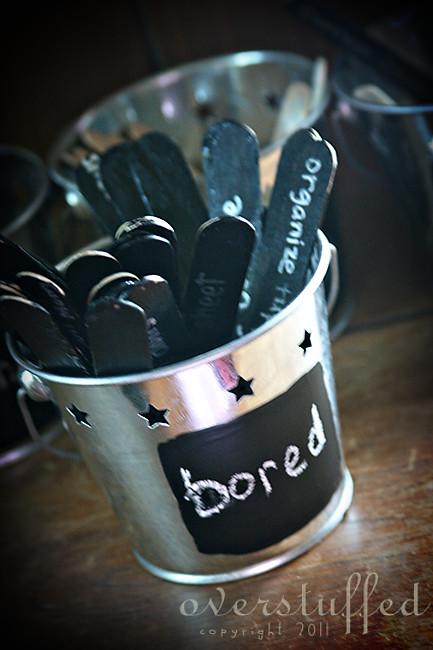 I also made a bored bucket.  This has things for them to do whenever they can’t think of anything else to do.  Sometimes it’s a job that isn’t so much fun, and other times it’s something fun to do.  Just a minute ago Chloe drew from the bored bucket and the stick said to plan a week’s worth of dinners.  She is so excited and is busy on the floor behind me making next week’s menu.  (Hopefully it won’t be too crazy!)

My favorite thing about the chores bucket is that they are excited to go to work.  My least favorite part is that they aren’t so good at some of these jobs yet and often make a bigger mess out of them than helping.  I’m trying not to get frustrated and remember that I am in the business of teaching my children, not having a perfectly clean house at all times.

The other thing I’m making them do this summer is read.  Read, read, read.  My mom had mentioned an article she read a while ago which said that if kids read 12 books over the summer, they will be more prepared for school the next fall.  I don’t know where the article is and I Googled to no avail, but I figured it can’t hurt.  Only I only chose 11 books for Bria and Chloe.  Sophia can’t read yet, so I bought her a few new books and we’ll read things we already have, which, trust me, is plenty.

Joel won a nice gift card to Amazon, so I used it to buy 4 or 5 new books for each child.  The rest we already had. 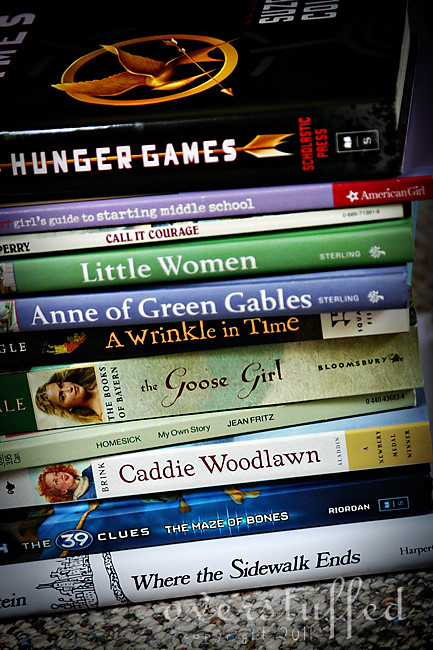 She is just about finished with The Hunger Games, which was the first book she chose.  She can’t put it down and is annoyed when she has to.  This was one I didn’t know if I’d let her read, but she had heard about it and really wanted to read it. We’ve been talking about it as we go and she’s done just fine with it. 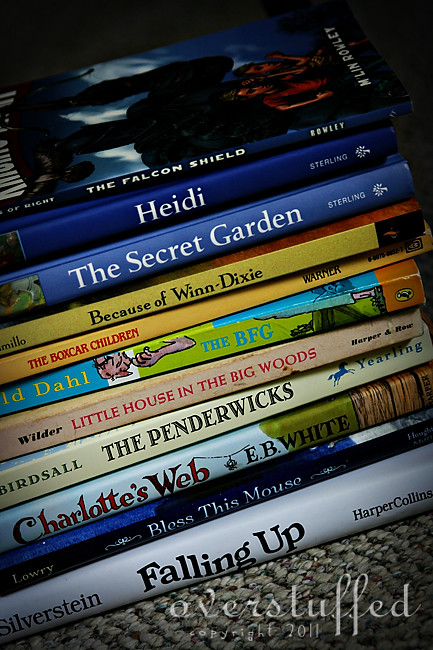 She devoured The Secret Garden in one day (it is an abridged version, which I didn’t realize, but oh well) and is almost finished with Heidi. 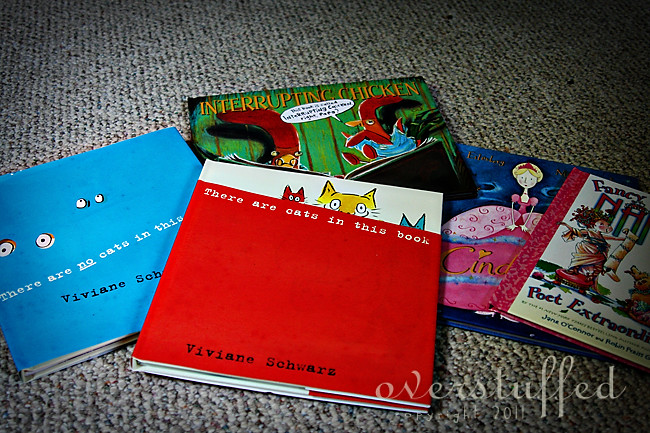 I have to say I love Interrupting Chicken.  The cat books are really fun, too.

As for other things we’ve got going this summer…I’m in the opera again (and so is Chloe!).  This time we’re doing Rockland, which is a new opera and we are the US Premier.  It’s quite an interesting work about the mining town of Rockland, which is just about a half hour drive from my house.  It’s tough, though–part in Finnish and part  in English and very difficult music.  And rehearsals are starting in earnest this week.  I was trying to teach less for this summer, but I still have quite a load.  It’s beginning to taper off, though, and by the end of the month I should have about 5 fewer students.

The Maestro is also involved with the music festival this summer: This time with his trumpeter hat on instead of the usual conductor hat.  He is doing four performances around the Upper Peninsula with another trumpeter and an organist as well as playing in the pit orchestra for the opera.  He is also teaching summer classes (hooray!  If you remember last summer, you know why this is wonderful!) and still playing with his rock band.

We (mostly Joel, and a little bit me) have also been working hard on making our yard fun and presentable this summer.  He’s put in a patio, a flower garden, and is working on building a play set.  Pictures to come.

After I find time to breathe.

A Jane Austen Education
Next Post: You Are Not Your Brain

You always inspire me to be better organized!

The book list is such a good idea. I need to get on that.

We're trying to get into a good routine too- practicing, chores, etc. I love the chore bucket idea. After a week in Hawaii and a week at institute, today was our first day of summer break

I love Call it Courage and Goose Girl! What fun books for her to read! Have you thought about the old-school Nancy Drew or the Little Maid books? I was hooked on those when I was her age.

I am always so amazed at the cool things you do with your kids. I wish you were my mommy sometimes:)

Haha, as I read this blog I Realize you are where I have been. And now I'm you — unsettled and trying to fix everything and get into a groove.
And now that's you. 😉
Good luck with the fins. 🙂

I love the books that your girls are working on. It sounds like your summer is off to a great start. Enjoy!

You inspire me all the time to try and be a little better and a little more organized. I sure do love you, Lara!

I love your buckets! So cute-Elodie is just now showing an interest in American Girl Dolls. We did the Barnes and Noble reading program and she picked an AG book. I'm hoping we can save enough pennies to get her one for Christmas. I can't believe how expensive they are! But then again, she enjoyes the catalog that comes every year just as much as the doll! Maybe that can be enough! 😉 Happy Summer!

Ethan would read the Diary of a Wimpy Kid books every single day, over and over, if I let him. I really want to hide the books so I can "make" him read something else. But he just finished Mrs. Piggle-Wiggle and loved it. I just need to find more books that look more interesting to him!

Have a nice summer!

Love the book list! In fact, Chloee has now started a habit of after our goodnights, we let her read her books for another 20 minutes or until she falls asleep.

I love your chore system! Especially the bored bucket 🙂

I'm planning to read Caddie Woodlawn this summer too… I think I saw it on Carrie's blog? Let me know if you like it ":)

You are a genius! Thanks for all the great ideas.

I have a similar 'bored' bucket — but it's divided into two – if they tell "me" they are bored, they draw from the 'mom's bucket' and it contains jobs. If they just come and draw from the kid's bucket, it has fun activities.

your buckets are SOOOOOOO cute.