Home » How can I keep from singing? » On Habits and Hope 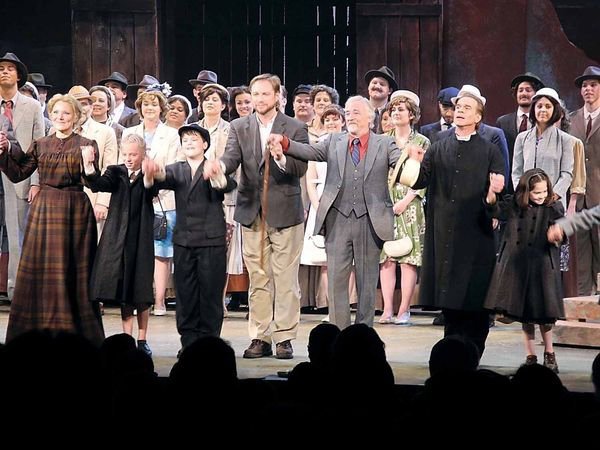 Final bows for Rockland, the Opera on closing night.  This picture appeared on the front page of the local paper the next day.  My favorite part of the picture is Chloe…she is making a face at her father, who is in the orchestra pit just below her with his trumpet, probably making a face right back at her.

One of the most difficult parts to learn in the opera was a scene that incorporated “Shall We Gather at the River” with a Finnish Lutheran Hymn.  In that scene, I was assigned to be a Methodist, and so I sang “Shall We Gather at the River” which is a hymn I’ve song many a time.  But this time, it was written in Lydian mode.  If you don’t know what Lydian mode is, all you really need to know is that it’s not Major and it isn’t minor and it’s really difficult to sing in, because our ears and brains don’t particularly like modal tonality.

So we had to relearn a very familiar piece of music with almost the same notes, but not quite.  Pitches raised or lowered a half step where they’re not supposed to be.  I worked my guts out trying to learn the new version and I finally got it.  I can’t speak for everyone else, but judging by how well everyone knew it by the end, I’d say I wasn’t the only one who worked that melody to death.

Well.  The morning of our final dress rehearsal I received the following email:

Dear Chorus–I just had a call from Craig who has our notes from Jukka Linkola.  We have a change to make before this evening’s performance/dress rehearsal.  Turns out that the Methodist hymn in the two churches scene was missing a flat in the key signature and there really is supposed to be a g-flat in the signature.  (software problem? gremlins?)  So the Methodists sing “Shall we Gather at the River” exactly as we all knew the hymn tune to begin with.  The only other change will be that at the phrase “throne of God” there will be an e-flat on the second half of the word “of” instead of an e natural.

Such is the way things go when you are working with new music, especially when the composer doesn’t show up until the very end.  I honestly thought it wouldn’t be any big deal.  After all, we were just going back to the normal tune, the way I’ve sung it a million times before–should be totally easy.  We did go through it beforehand, just to be sure we had it figured out, and it was no problem.

BUT, as soon as we were on stage, in costume, with the orchestra and with the other tune present in the scene we all started out singing it the hard way.  We didn’t ever fully recover, though some of us fixed it and some of us kept with the modal melody.  It sounded pretty awful, and it was scary to think that it was our final dress rehearsal, that opening night was looming and we weren’t sure if we could unlearn/relearn it quickly enough.

In the end we did just fine, but the whole experience has made me think about habits.  There are good habits and there are bad habits.  It always seems to me that the good habits are much harder to form than the bad ones, so let’s just say that the weird way to sing the hymn was the good habit in this particular analogy.  I worked really hard to learn it right, to unlearn everything I knew about that song, but I did it.  I overcame the bad habits and I created a new one.  And then, I was put into a situation where it should have been easy to go back to the old, but it turned out to be really, really hard.

And that’s what gave me hope.  Sometimes it feels like the new habits never stick, that I always just keep going back to what is easy.  But, really, when I work hard enough, the habit really does stick–as long as I keep working.  And even when I’m put in situations that make it harder to “be good,” so to speak, it isn’t as hard as I sometimes think it is.  So, my little habit of exercise, the one I’ve been working really hard on these last several months and which has kind of fallen on the back burner during the last few weeks of intense rehearsals and performances, is still there.

(Getting my sorry self to the gym ASAP.)

I like the analogy. I also smiled at it because for my senior violin recital, I learned a Charles Ives sonata that incoporates "Shall We Gather at the River." And since it was Charles Ives, it probably sounded as strange as your version did.

I love the thought behind this one and I completely agree with you too! It looks like you had a wonderful time doing this and I think that is what counts!!!

zoiks! That's scary. Last minute changes are bad enough, but when they are to a piece rehearsed over and over again….. that's the stuff of bad dreams lol

Great picture! In the middle of all of it, Dad is being Dad and Chloe is being Chloe. Love it!

OH man, re-learning something I memorize is so painful.
wtg. It's a great thing to do to your brain. 🙂

Thanks to my kids' piano teacher, I know was modal means! (I know it's a DUH thing for you, but I never learned it.)

(Back to the gym this week for me, too.)

How nerve wracking for them to change it at the last minute! And I love that picture of Chloe, and your analogy is Amazing! I love it, and need to make exercise a habit.