When I first walked through this house while on my house-hunting trip, I was a little puzzled by the gigantic, low-ceilinged room upstairs. It was billed as a bedroom, and I suppose it could be used as one, but it was not your normal bedroom. However, I knew that it would make a perfect playroom for little people if we bought the house. And so a playroom it became.

There were the usual problems: Ugly carpet and old paint. After two years of living here, the playroom finally took priority on the list of home improvements. I painstakingly chose a paint color in September and painted the entire room in early October (along with the living room–I was on a roll!). In late October we worked on painting the existing trim, and the first week in November the new carpet was installed. The week before Thanksgiving, Joel worked on painting the baseboards (which we found in the closet, never having been put up) and the day before Thanksgiving, he and I did our best to nail the baseboards up, which is much more difficult than it looks! The girls and I then went through all of the toys, gave a healthy amount to the Goodwill pile and finally put the room back together. And then I baked pies.

Do you want to see the before/after? I have meant to do this for weeks, but I keep not remembering to take pictures of the after. So, tonight, after dark, in the worst lighting possible, I finally went up to take them. They’ll have to do.

Like much of my house–especially the upstairs portion–this room hadn’t seen much TLC in a good decade or more. The carpet was in okay shape, but it was pink and stained. The wall was an awful steel blue color, and even worse, it had been painted with impossible-to-clean flat paint. Ugh. And then there are the stencils. So much to fix. 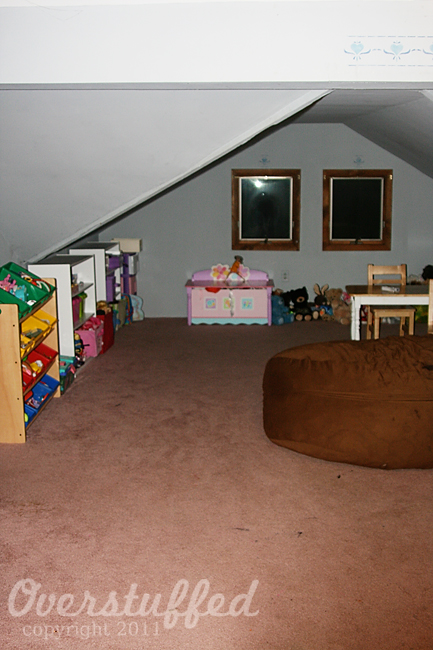 This is the view from standing in the doorway. The first third of the room is normal ceiling height, and then we have a lovely stenciled support beam which I can stand under with a little more than an inch to spare (I’m 5’9″) and the ceilings just get lower and lower from there. Which is perfect for a playroom inhabited by little people. 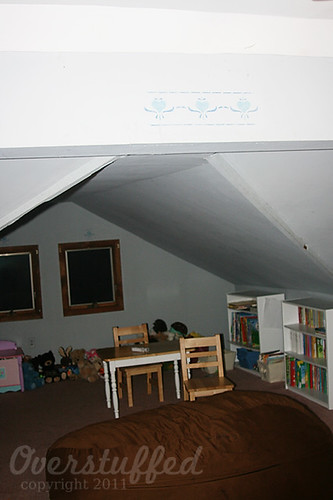 We had a lot of toys and books on those shelves. A LOT. And it could get pretty scary in this room when several kids came over (or sometimes even just my three) and pulled every single thing out of the shelves and dumped them onto the floor. It could take hours to clean up. I just had to tell myself that this is why we had a playroom. I could always shut the door if I couldn’t deal with it. And I did (shut the door, that is). 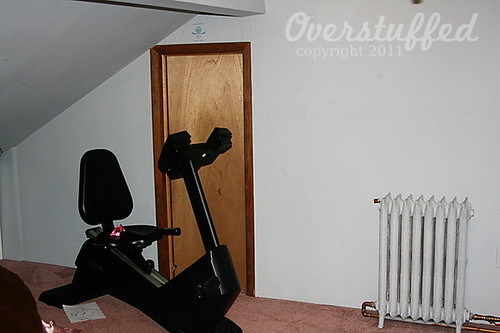 This is a view from the front right. That door leads to a really large closet which has a twin closet on the other side of the room. This one we use for storage: luggage, the crib, winter clothing, blankets, etc. The radiator was painted the same blue color as the walls (why?), and that’s my exercise bike, which I do try to use daily. 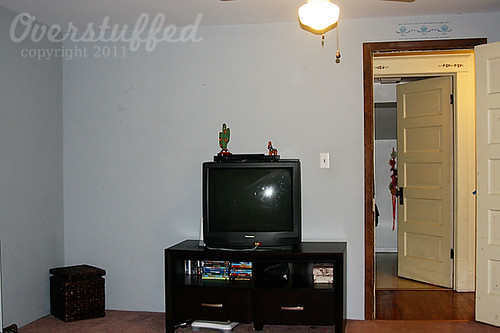 The view if you are on the exercise bike. More stencils. (Even more in the hallway there…those are the only ones left in the house now…do you remember the ones in the girls’ room?). A television. A door. 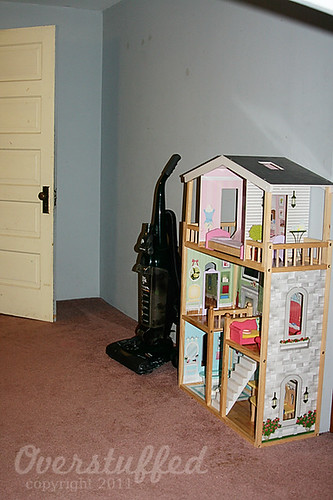 We kept the dollhouse in the taller part of the room, because the roof didn’t fit against the short walls. And that’s my vacuum. Sometimes I even use it. 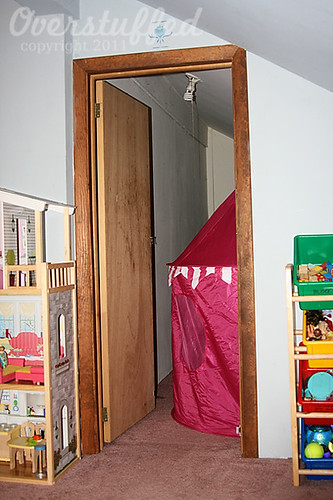 And there’s the other closet. This one we have always kept empty. The girls did enjoy using it for a place to play, and that tent had recently been dragged in there for a secret fort or something that Chloe and her friend built. Which gave me a great idea…but before we get to that, do you want to see the miraculous transformation of our playroom?
AFTER

The color I painstakingly chose for the paint is Sherwin-Williams Tiger Eye. It’s a pumpkin-pie kind of color and I just love it. I have come to the realization that I only like autumn colors in my home (with the exception of the girls’ bedrooms–they can have their bright pinks and greens). Knowing my “color personality” or whatever you want to call it makes things a lot easier and did I mention I love the results? 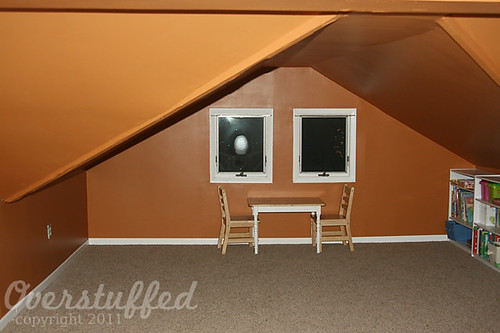 The carpet didn’t photograph well, but it’s a taupe color with flecks of green and brown and it’s that loopy shaggy kind of pile. It kind of looks like Berber in the pictures, but I can assure you that it isn’t. 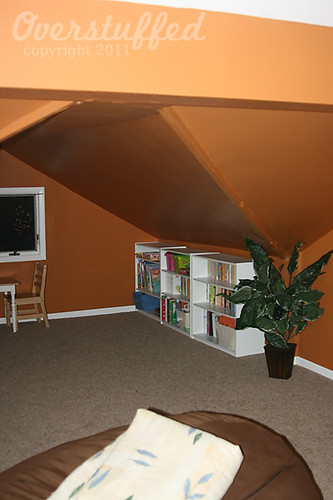 While I was painting, I had put all of the furniture into the empty closet (which is so big that everything fit!). One day, I was trying to get something out of the closet and I reached over the bookshelves and lost my balance. They are flimsy, crappy shelves so when I fell on one it completely decimated itself. Plus gave me a nasty bruise. Anyway, all that to say that I only have three shelves now, which was the perfect impetus to get rid of stuff. The shelves that are in the corner there hold mainly books. Also puzzles and the few Legos (Lego?) we own. 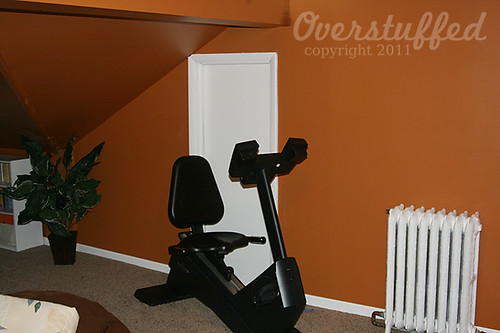 Like I mentioned before, Joel and I put up the baseboard together. It was a tough job, and we are not professionals. However, I am proud of us. It’s not like our 100-year-old house is very easy to work with, either. It’s kind of lopsided and stuff. But we still love it. And, also, I painted the radiator white. It looks much better now. 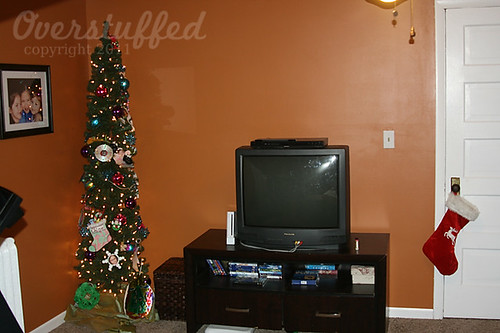 The TV. And the kids’ Christmas tree. I’ve always wanted a skinny pencil tree, so I got one this year. It holds all of the girls’ homemade/schoolmade ornaments. I have started to hang things on the wall, but haven’t quite decided about everything yet, so they’re still a bit bare. 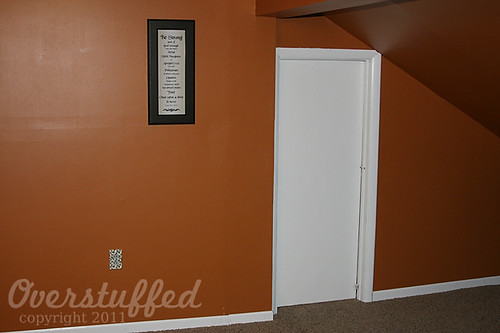 The outlet plates had also been painted blue, and since I didn’t really want to buy new ones, I covered them with patterned paper and mod podge. Turned out pretty cool (thank you Pinterest!) even though the actual outlets are still blue. The frame up there holds a quote by Dieter F. Uchtdorf, who is a member of the First Presidency of the LDS Church. It says:

“Be strong and of good courage. You are truly royal spirit daughters of Almighty God. You are princesses, destined to become queens. Your own wondrous story has already begun. Your ‘once upon a time’ is now.“

As the mother of girls, I had to buy it to hang in their playroom.

Which isn’t so much a playroom anymore, you may be thinking. Well, let’s just open that closet door and see what we find inside, shall we? 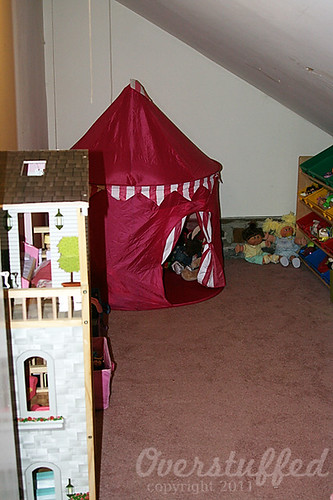 Aha! There are all the toys! 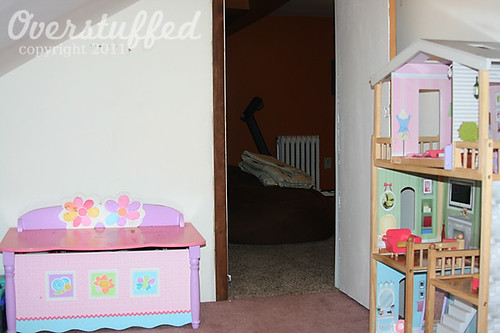 Since the girls and I were able to get rid of so many toys, and they had enjoyed playing in the closet anyway, we decided that the closet is now the offical “playroom” and the playroom is maybe more of a family room. We kept the pink carpet in the closets because it was in better shape in there, and the closets are so big it would have been an extra $600 to recarpet them. Maybe someday. 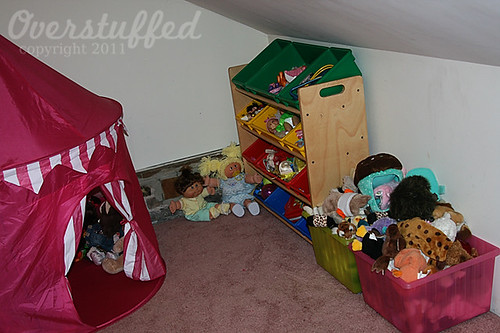 I did buy paint to do this closet a lovely cerulean blue, and I thought I’d paint clouds and some trees. Maybe I’ll get to it over Christmas break.

I must say that having the toys in the closet has made a huge difference in the cleanliness of the playroom. Part of it could be that Sophia is now in Kindergarten and isn’t up there as much as she has been in the past, but I say having fewer toys and confining them to the closet has helped. This is not to say that they don’t bring the Barbies out of the closet, stuff their clothes with toilet paper, change Ken’s name to “Bob Harper” and re-enact challenges with them while watching The Biggest Loser on Netflix.

Because they do that all the time (I love how creative my children are). But there is no longer any arbitrary dumping.

And I love our new playroom.

Pray Always
Next Post: What Think Ye of Christmas?

This is wonderful Lara! I love it! You did a fabulous job!

I love it! I love redecorating to something more organied and efficient. I just hate the work that has to be done : )

Well done! What a great decorator. (and tall, too.) I love making over a room. No matter which room it is, it suddenly becomes my favorite where I want to spend all of my time. Are you that way, too? We share a love of an autumn color palate as well!

It really looks great! You have done a wonderful job transforming your house into a home that is totally you!

Bwa-ha-ha! I love the "stuff their clothes with toilet paper" bit.

i. Love. It. Especially the toys in the closer part. Very nice!

You did a great job. I love when things turn out and there is great satisfaction. I really like the paint color, it looks warm and inviting.

What a wonderful transformation! All your hard work paid off, and it looks fabulous. I'm keeping this up on my screen today as inspiration as I tackle the Herculean task of reorganizing the studio today. Ugh. Wish me luck.

The decluttering is the hardest part. Looks great!

Good job!! I wish I had a play room like that!

What a cool room. It's got a lot of personality and the color scheme you chose sounds comforting.

It looks great Lara. I love the color!!

You are a magic-maker! Looks awesome!

Fun, it looks so warm and inviting… I want a skinny tree too for my kids ornaments, what a great idea. 🙂