So, here’s the scoop on electronics and practicing…

I hate, HATE, hate (and yes, I am aware that hate is a strong word) the way my children are so easily drawn into screens. Their eyes glaze over, their ears stop working, and they turn into little zombies while watching a movie or playing on the iPhone/iPad/Wii/Computer. I don’t mind a little screen time–but my children seem to take after their father and me and that means that it’s too easy to get obsessed and end up on the couch in a catatonic state with drool sliding out of the corner of your mouth while playing Fruit Ninja on the iPod.  Really.  We are all or nothing sort of people.   And we’re working on it, but in the meanwhile, we also need to help our children work on it.

During the school year, I do not allow electronics Monday through Thursday.  It just eats into our time too much, and homework and practicing and chores and eating dinner don’t get done.  On Friday, the kids often come home from school, run upstairs to the TV room and stay there until midnight.  I do not love that, but it was kind of the consequence for not allowing it all during the week.  Much like they ate everything in sight during spring break, they also rarely come up for air from various electronic devices on school holidays.  See?  I told you we were all or nothing kind of people. 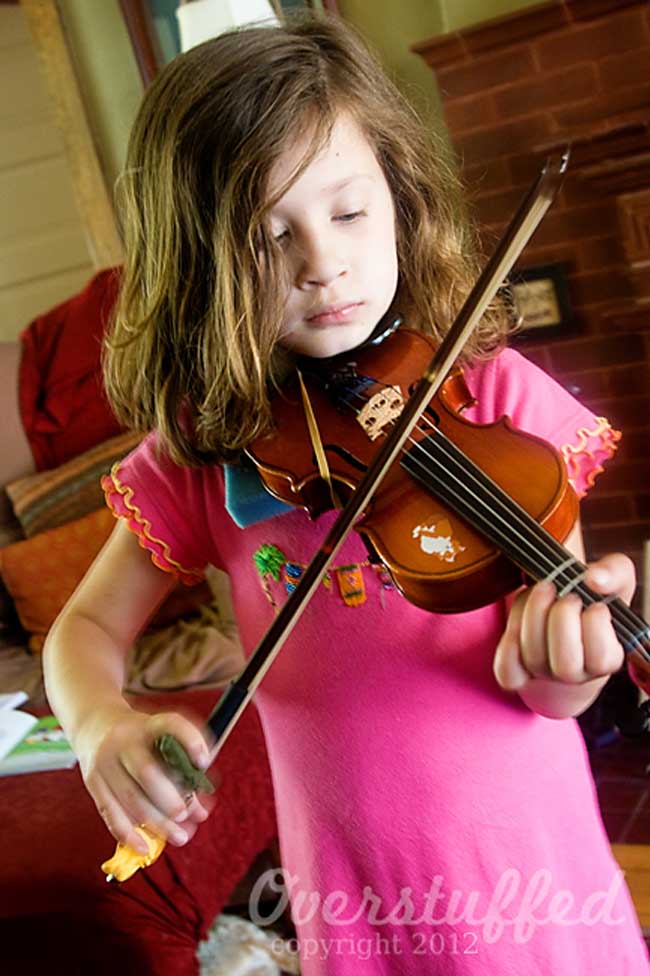 So, I was trying to figure out how to successfully place limits this summer when my friend Erin posted on Facebook about what she was doing to limit electronics at her house: One minute of screen time for every minute her children practiced the piano. Obviously, I stole that brilliant idea from her faster than you can say Super Mario Brothers 3.

So that’s it. For every minute they practice their instruments in the morning, they get a minute of electronics. In general. Sometimes they can have more, like maybe for our insanely long car trip this summer. They can also save up their minutes for a huge electronics binge if they want to. But they still have to practice every day and do their chores and reading before their eyes can so much as glance at a screen.

It’s working pretty well, so far. There has been absolutely no complaining about practicing, and that alone makes me over the moon happy. Of course, we’re only three days in, but I think it’s a good sign.

Chloe said that it should count for Joel and me, too. No screen time for Mom and Dad unless we also practiced. I thought that was fair enough, and so the only reason I’m allowed to be blogging right now is because I spent three hours at opera rehearsal today. And since I doubt I’ll actually spend three hours online today, I totally have tons of minutes saved up!

P.S.  When I was working on cleaning out my office last night (which is in its typical end-of-the-school-year horrifying state), I found my old friend Walking Into a Hug. I then guiltily remembered that I have been trying to blog about (and actually DO) this project for nearly two years now and flipped it open to see what the next task was, and wouldn’t you know it? It was Turn Off.

“Turn off or limit the television, computer games, videos, the Internet, and other electronic gadgets.”

So, this post totally counts forProject Walking into a Hug, and we’ll see how the rest of the summer fares in getting through the rest of this project! Someday I will finish it!! I did find my book, after all.

Here’s to not having zombies for children this summer.  Or ever.

How to Have Self-Reliant Kids This Summer
Next Post: Movers, Dreamers, and Risk-Takers

I'm with you on the screen thing! That's one of the reasons I resisted getting a iphone for so long, and I still refuse to upload any games. I'll just get too sucked in.

Fortunately (?) I'm in front of a computer all day for work, so once I'm home I have no desire to park myself in front of a TV or computer.

It's a really good idea! Abby's practicing around 2-2.5 hours a day though, and I'm not so sure I want her to have that much screen time….

It's been two weeks for us, and some days are better than others. When we are just home, the boys practice more. But when we are running errands, they don't want to spend their leftover time playing the piano OR video games – they want to play outside with friends. Which is great to have them get outside, but I want them to learn how to work too. I'm still trying to figure this out. I am thankful that it's summertime though, so I can spend time with my kids and teach them too!

I really like this idea. Although I don't think I could handle listening to my 7 year old play Indian Drums for the solid hour-and-a-half this would probably motivate him to practice. 😉

If you want to try something radical, here's an idea. Last summer I initiated our first "Tech-Free July" and it was absolutely SPECTACULAR! I literally had computer withdrawal for the first five days but after that I was so much more engaged with my family, myself, my house it was amazing. I have five kids and they all did an amazing job with it too (a non-excited-reader even became a reader!!). I'm not saying it was easy, it's not easy even when you have tech around, but a month without tech-time battles was outstanding. T.V. was allowed at other people's homes of course and computer game playing did happen on occasional visits to the library, but there were no "hand-held" gadgets in the car and no t.v./computer in our house (none for me either…I don't have a smart phone, just a regular cell so that wasn't an issue, I shut down my laptop, put a "please call me on the phone" message on my email responder, and stuffed it in the closet). I can't say enough how much I enjoyed that month and how much I've looked forward to it all year…counting the days…

I totally recognize you photo now from other blogs. So funny about the connection we just made on FB.

I really hate how my kids get with their computer games too. It's hard when it's so hot in AZ during the summers to come up with other activities. We can only swim for so many hours a day. I like your plan!

I haven't come up with a screen tamer this year. Not enough of my kids are practicing instruments over the summer (only 3 out of the 6). But I need to come up with something…