Home » Christmas » Why I Don’t Do Elf on the Shelf

Elves on Shelves have taken over the world. My kids tell me that everyone has one but us. There are entire boards devoted to their antics on Pinterest. And you can easily purchase your very own elf on a shelf for around $39.99, but I’m just not interested.

I know a lot of people think they look creepy, but that’s not one of the reasons I won’t be buying one (I actually think they’re kind of cute). 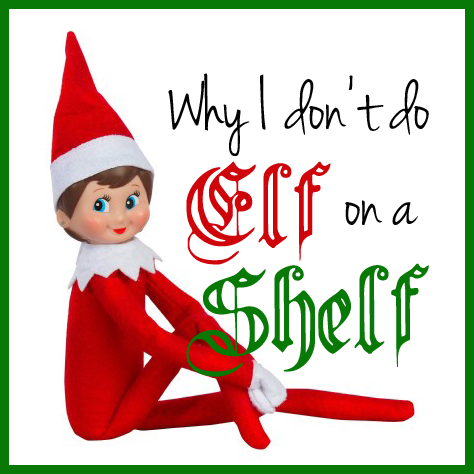 Make sure to check out our Ultimate Holiday Gift Guide—Find hundreds of gift ideas for EVERYONE on your list!

My reasons are as follows:

In fact, I am totally uptight. I just can’t imagine purposely making messes every day that I will then have to clean up. I already have plenty of people making messes in this house, and I don’t have enough people cleaning those messes up! So I am not okay with pouring flour on the floor for elf snow angels, dumping out cereal because the elf is hungry, or creating some sort of elf vomit. Because nobody is going to be cleaning up these messes but me! And I realize that you can have your elf do plenty of things that don’t require spilling flour all over the kitchen or pouring M&Ms down your toilet—I love to see the many creative Elf ideas that people share all over the internet. I am simply not fun enough. I am seriously awe inspired by the moms who can do things like Elf on a Shelf and have just as much fun with it (if not more!) as the kids do. I am not that mom.

Our elf would probably stay on the same shelf it started on for the entire Christmas season. For instance, we have such an unreliable tooth fairy at our house that the girls have to tell me to call her on the phone because she has not come to pick up this tooth for over a week. (And seriously?  How disgusting is it that my children sleep with week-old lost teeth under their pillows?  Shudder.)  If I cannot remember to stick a dollar under my child’s pillow when I have been reminded that day about two million times by said child, I will not remember to move an elf around.

3.  I don’t like the focus of Christmas to be on Santa.

This is probably the biggest reason why I don’t do the Elf.  Don’t get me wrong, I love Santa Claus. We do Santa Claus at our house, but he doesn’t get to be the star of the show anymore. I want Santa to function as a symbol of Christ, and I want the focus of the season to remain on our Savior. I have an issue with children believing that they will get whatever they ask for from Santa, because I’m not sure that teaches them what Christmas is truly about. And I’m really not sure about having one of Santa’s elves in our house to monitor my children’s behavior and see whether or not they even deserve to have whatever they want from Santa. (Especially if that elf is naughty! What kind of example is that?)

4.  I am uncomfortable with the focus on behavior at Christmastime.

It seems to me that we should be teaching our children to act appropriately without resorting to Santa bribery. I felt terrible every single time I pulled the Santa card to get my children to change their behavior during the month of December. Was I seriously going to take away their Christmas gifts or have Santa bring them nothing because they weren’t being obedient?  Of course I wasn’t gong to do that—telling my children that if they didn’t do such and such they wouldn’t get any presents was an empty threat. An empty threat that didn’t even work most of the times I tried it, which only made me feel worse.

When Sophia was 4 years old, I pulled the Santa card on her once. And she saw right through it. When I warned her that Santa wasn’t going to like what she was doing she interrupted me and said, “No!  Not Santa!  JESUS!  Jesus isn’t going to like me keeping doing this.”

I have never used Santa as a means for getting good behavior at Christmastime since. I have plenty of other ways to do it that work great during the rest of the year, and amazingly, they work just as well in December!

I could get on board with doing the elf if it was just something fun to do at Christmas time. Which is what he obviously is for many, many, many people.  Elves on shelves have taken over the world, after all.

If I were to go out and purchase an elf, my children would know that he wasn’t there to spy on them for Santa, nor did he even come from the North Pole. They would know he was a doll I bought from the store and that we were going to have fun with him. And since I would forget about him myself, I would even let my kids take turns coming up with creative things for the elf to do—as long as he didn’t make any messes! No flour angels or spilled cereal! And especially no vomit!

Unfortunately, though, I am just not fun enough.

And that’s the real reason why we will never do Elf on a Shelf.

The Best Christmas Gift
Next Post: 24 Christmas Books to Read with Your Family

Love it! I'm not fun enough either. I have come to grips with that by now. Also, $40 would be much better spent in myriad other ways, including helping out someone who needs it at Christmastime.

p.s. saw this and thought of you. Flash mob orchestra? Enough said.

Tell them we don't have one either…

I had no idea they were supposed to make messes! I can see why that would be a deterrent. My biggest reason is that we're Jewish. But if I were going to not do an elf on a shelf, my biggest reason would be the forgetting thing. I can barely manage the whole tooth fairy shenanigans.

If I had kids I would not have an Elf on the Shelf. The end.

I too am a terrible tooth fairy.

We have an Elf (who's name is Blaze) but he's very neat and does not make messes. Right now he's hanging upside down from a vine on a potted plant. Last week he was found in the Nativity worshipping the Savior. My kids loved that. 🙂

I love this post. I agree with it and that is the cutest thing your daughter said. Kids often remind us of the truth when we need it most.

I’ve 52 and never had elf on the shelf for my own kids, but my daughter has taken this up for my 5 yr old grandson. She’s been posting the cutest pictures on FB and this morning at Dollar General I walked in to see some orange-haired elves (my grandson says his hair is orange 🤣), so of course I had to buy one. Being a Christian, I TOTALLY get it!! But the messaging doesn’t have to reference Santa… You could say incorporate the omniscience of God. We had Santa (my husband is an unbeliever), but I always told them that Saint Nicholas was a very generous man to poor children who lived a long time ago and go into his history and love for Christ. And last but not least, there’s this thing on our phones called reminders… 😘

You are right! I wrote this post almost ten years ago, and I have softened a bit towards the elf. I still probably wouldn’t do it personally—mostly because I would never remember to move it—but I love that it works for others.