The biggest reason you aren’t able to stay organized once you declutter is easier to fix than you think!

Today is Day 18 of the 30 Day Decluttering Challenge and it’s time to address a big question: How do I keep everything organized and clutter-free once I’m done with this project?

The answer is in the questions you asked yourself at the beginning of the project. Specifically the question, “Why aren’t things in their specified home?”

The key to staying organized is simply to make sure that things live in a place that is practical. If the place you decided to store something is impractical to get back to, you will never actually put things back in that place.

My declutter project from today highlights the idea of practical organization really well.

I’m starting to feel a little (okay, maybe a lot) vulnerable about this series. I’m showing you guys all of my craziest messes, and I’m starting to realize just how many there are! Yikes! That said, I’m thrilled that doing this little series is making me accountable and that I’m finally dealing with all of it!

Today’s mess features my kitchen “closet.” It isn’t really a closet, though, it’s some shelves along the stairwell to the basement. Since we have a fairly small kitchen with limited storage and a tiny pantry, I am thankful for the extra storage those shelves offer.

But it’s a clutter catcher, that’s for sure! There is lots of stuff there that isn’t supposed to live there, and everything has become a jumbled mess in the last few months.

Do I dare show you what it looked like before I tackled it yesterday?

On the bottom shelf there is a box for recycling. We don’t have recycling pick-up, so I have to physically drive it to the center whenever the box is full. I actually took it less than a week ago. But then I did my magazine decluttering and it is quite full again!

Anyway, that is my scary kitchen storage area.

First, I pulled everything out to see just what I was dealing with.

That was fun. And also amazing. I have no idea how I was able to fit all of that stuff into that little space in the stairwell!

How much do you love my funky carpet-covered shelves? I actually do kind of love them. They are just one of the fun quirks of living in a house built in 1907! I’d love to know the era of this carpet—my guess would be the 1970s, but I’m not totally sure.

I noticed a few things as I was pulling everything out.

First, I had quite a few bins and things on the shelves. However, not a single one was actually labeled, so they were full of random things and did not serve a functional purpose.

Second, I had a lot of plastic forks and almost no plastic spoons. Two full boxes of forks were hiding. If I had been more organized before, I would have known to buy spoons instead of more forks.

Third, there were a lot of tools on those shelves. A couple hammers, the drill, screwdrivers, a measuring tape, and more.

This is important because the tools do not belong on those shelves. They have a specific place in the basement.

The first step in this series is to make an action plan for the problem areas in your home—the ones that tend to be the most cluttered. One of the assignments in that action plan, was to figure out why things were not in their specified home.

Why weren’t all the tools in their proper place?

It’s entirely possible we are just being lazy, but the fact is, neither I nor my husband ever put the tools away after using them. We just set them on those shelves.

Because that is a freaking lot of work to find and put away something we use on a regular basis!

I talked to my husband about it and he agreed that the more oft used tools should definitely live in the stairwell shelves. I put the drill away downstairs and kept the rest in the random shoebox that was there for now. I am sure I will find an extra bin as I’m working on decluttering these next couple weeks, and I will put the tools in that when I find it.

I threw away obvious garbage, put a few things back into their proper places in the kitchen, and moved a few more random tool-like things back down to the basement.

I then decided what would live in the bins and labeled them.

The napkins were perhaps the biggest source of mess in there. People would grab one, but others would fly all over the place, so then someone would just cram them into a corner somewhere. I threw a lot of them away—what a waste! But now they live in a bin, where they will be less likely to get destroyed. The small paper plates also live in a bin.

All of the dog stuff now lives in its own labeled bin. Most of it was there before, but lots of her things were also just randomly on the shelves.

The bin below that is full of plastic grocery sacks. To be honest, they are not practical in a bin. My friend Hilda at From Overwhelmed to Organized has been writing her own 31 Day series this month, and she inspired me to just purchase a bag organizer when she wrote this post: Organizing Grocery Bags.

So I purchased this one: Bag Organizer. I plan to hang it on the basement door right next to the broom when it arrives in a couple days. For only ten dollars, it was worth it to me to stop having the bags be a mess all the time or too difficult to get to.

One of the biggest sources of the clutter in there was all of the reusable grocery bags. I honestly don’t know where on earth they all come from! I’ve only ever purchased a handful of them in my life. I know the library gives us each one every year when we sign up for summer reading, and they are often used as promotions from various other companies, so we’ve gathered quite a few over the years.

I threw away a couple of them that had seen better days, and the rest now live in this canvas bin that was already on the shelf holding a bunch of random crap.

My oldest daughter uses those bags often to tote various things to school or church. I rarely actually use them for grocery shopping, but perhaps I will start taking them more often now that they are corralled into one spot instead of being flung all over the place.

The bit of food storage that lives on those shelves has the next shelf all to itself.

Check it out! Isn’t it so nice and pretty now? And look at all the extra space!

Hopefully it will be more practical now.

The tools are allowed to live there, so they won’t bug me that they are not in their proper place. The bins are labeled, so everyone knows what belongs where. And as long as I make sure to take the recycling in when it is full, there is no reason why this area shouldn’t stay organized. Everything has a practical place, and everything is in its place.

Okay, so there are a few reasons why it wouldn’t stay organized.

Those reasons are my kids. But we’re working on that. Just ask them, and they’ll tell you how much mom is harping on PUTTING THINGS AWAY WHERE THEY GO this month. I’m working on it, too. It’s just so easy not to do it!

But, in the long run, it’s easier if you do.

This project only took me about a half hour, by the way. I was amazed by that, because I dread looking at areas like this and I put off dealing with them because I think it will take me hours. 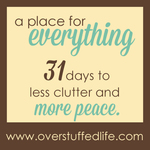 How to Create a Clutter-free Entryway
Next Post: Everything in its Place

Good morning, Lara!
I so enjoy spending my mornings with you.
I think your carpeted she es are quite clever. If they were mine, I'd trim the out in fluted screen moulding painted to complement a color you like in the stripe. It's a cheap and easy way to give your unique shelves a finished look.
But that is a whole other blog!
My husband appreciated me cleaning off the kitchen table so much he dumped his computer bag on it the minute he walked in the door.

Great job Lara! Thanks for the shout-out too 🙂 I love your before and after pics on this project. What a difference! And that's so cool that it didn't take very long. Isn't that often the way? We get annoyed for so long by something and then it doesn't actually take long to fix the problem. Oh and that rug on the shelves is great… so retro 🙂 Very cool storage space though!

I love it and now you have me thinking of covering my wire shelving that makes me crazy.

It's so true. I'm starting to really slap those labels on everything in sight. It's helping…but there's still a lot of disorganization around here. Why's it gotta be so hard?

Good idea! I'd love to see what it turns out like. At first I thought the carpeted shelves were kind of weird, but I really like them. Easy to clean (vacuum) and definitely unique! 🙂

You're welcome. My bag organizer thing came today and I am already in love with it. Such a simple change that will make a huge difference!

That is a good idea about the trim. I have ignored updating that space at all since most people never see it, thank goodness! (Though now I've broadcast it on the interwebs!)

Those darn empty tables…they don't like to stay empty for long! I have a friend who keeps her table set all the time to stop computer bags from landing there. And by set, I mean set for Thanksgiving dinner or something!

It's the kids, I'm telling you! Their schoolwork, papers and email alone is a deluge.

Yep. I drown in the school papers on a regular basis. We need a school paper lifeguard on duty around here!

Wow, great job. The space outside my basement door gets cluttered because I'm too lazy or rushed to bring things back down to the basement. I just waylay them there until my husband can't take it anymore and he dumps them on my craft table and now my craft table is cluttered! I wish I could build some shelves like yours but the space is not wide enough.

I know this is late, but I found that the only way I use my reusable grocery bags is to keep them in the car. I keep them all stuffed into one another, and I can't forget them!