Want your kids to develop a growth mindset? Use this powerful phrase to help your children learn to turn failures into success.

Or, maybe on their first chance to run with the varsity cross country team they get lost and come in last place.

That’s exactly what happened to my middle daughter last week.

She was so excited that her JV time at the previous meet was fast enough to bump her up to varsity for the next meet. As a freshman, this was a huge deal to her and she worked hard for it. Unfortunately, that meet was two hours away and I couldn’t attend to watch her run on the varsity team for the first time.

I texted her around the time I knew her meet would be ending to see how it went. 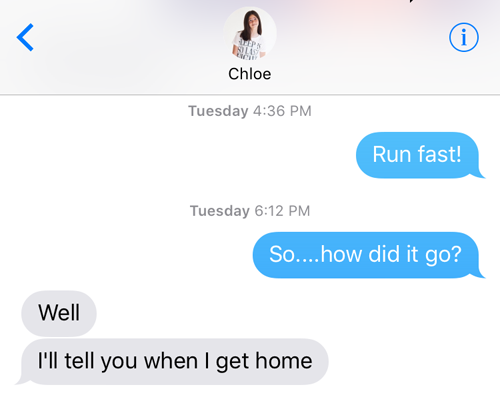 I know her well enough to know that “Well. I’ll tell you about it when I get home,” was hiding a very long story and I couldn’t wait to find out what it was. When the bus finally arrived at the school, she ran to the car and wailed, “I got 55th place! Out of 56!!!”

I asked her what happened, and the very long story I’d been waiting for came pouring out.

I will spare you the details of her very long story, but she got lost. Cross country meets in our area take place in the woods. Some schools mark the path very well and have people stationed at every turn, but this one didn’t do either.

Somehow she made a wrong turn and didn’t realize it for quite a while. After her wrong turn, she came across a deer standing right in front of her and immediately burst into tears—because the animal was so beautiful and majestic (that’s my girl!) but also because she knew no deer would ever be standing in the trail where 56 kids were running by. So she turned around to try to find her way and ended up crossing the finish line with about 10 extra minutes on her usual time.

But as she was telling me this story, she was laughing about it. I was amazed that she seemed to have bounced back so quickly from something like this. Normally when she fails at something that was super important to her she stews over it for days. She worries that she’ll never be good at it.

And sometimes she just wants to give up.

When kids fail, their first instinct is often to give up.

Kids today are growing up in a world where everyone wins. Everybody gets a trophy, everyone gets a part, and nobody is allowed to fail. Except that sometimes they DO fail, especially as they move into middle and high school. Things are more competitive and it becomes more difficult to protect our kids from failure.

At the first cross country meet of the season, she was devastated at her performance. She didn’t get lost that time, but she stopped several times and was just out of the mental game. Consequently, she was unhappy with her time. She knew she could do better and she didn’t live up to her abilities. Tears were shed and she was seriously ready to quit the team.

But she didn’t quit and the very next race earned her a spot on the varsity team.

I wondered if that was why she wasn’t so upset this time. Did her failure at that first meet and subsequent success at the second help her to realize that failing isn’t such a bad thing after all?

Kids need to learn that it’s okay to fail

While I don’t like to watch my kids fail, I actually do want them to fail sometimes.  Kids who are allowed to fail learn that failure is not a permanent solution. They learn that they can and will eventually succeed if they continue to try.

Furthermore, failure is an opportunity for kids to acquire something called “growth mindset.”

What is growth mindset?

The concept of growth mindset was first put forth by psychologist Carol Dweck in her book Mindset: The New Psychology of Success. Her research focuses on the idea that there are two different mindsets—fixed mindset and growth mindset.

Even more alarming, Dweck’s research shows that when children who have a fixed mindset experience failure they will do one of two things:

Children with fixed mindsets tend to give up after they experience failure and eschew challenges completely.

On the other hand, children who have learned growth mindset learn more and learn it more quickly. They learn to embrace challenges and even failure as opportunities for learning and growth.

According to Dweck, they “believe that their most basic abilities can be developed through dedication and hard work—brains and talent are just the starting point. This view creates a love of learning and a resilience that is essential for great accomplishment.”

I honestly hadn’t heard much about growth mindset until the past year or so. I think I try to instill the basic idea in my children, but not in any sort of conscious way. While I see the growth mindset in some aspects of their learning, I certainly also see some evidence of a fixed mindset in each of them. My eldest daughter “isn’t good at math” and my youngest daughter “will never be good at playing music.” (Their words, not mine!)

And a couple weeks ago, my middle girl was “a terrible runner!” Yet here she was laughing at her mistakes and promising me she’d do better in the next meet.

Where had she found this awesome new growth mindset in regards to her running?

As she continued her story, I soon figured out where her new attitude had come from.

When she crossed the finish line—#55 out of 56 runners—her coach asked her what happened. She explained to him that she had taken a wrong turn and gotten lost, worried that he would be angry with her.

But he wasn’t angry with her at all. He simply smiled and asked her one simple question:

“What did you learn from this?”

Instead of focusing on the fact that she made a mistake, he turned it around and helped her look at it through the lens of growth mindset.

As she explained this to me, I was amazed at how that one simple question had dramatically changed her attitude.

My mind was blown. She had taken that failure—one that she was quite upset about until her coach spoke with her—and used it as an opportunity to learn.

It’s only been four days since that cross country meet, but I have put that powerful little phrase in my pocket of parenting tricks. Not surprisingly, I have had several chances to take it out and use it these last few days, and I’m here to tell you that it works.

Not only does it help diffuse the feelings of failure, it immediately opens up a wonderful discussion.

So, when my youngest came home a little upset about something that had happened at school with a friend, I simply asked her what she had learned from the situation. Her feelings of anger and disappointment melted away as she thought about that. We had a nice talk about it, and she came up with several solutions to the problem with little help from me by simply taking the time to think about what she had learned.

So, next time your child experiences failure—big or small, in any aspect of their lives—ask them the one question: “What did you learn from this?” and observe the power of developing growth mindset.

Books I Read: July/August 2017
Next Post: How to Create and Remember Secure Passwords and Security Questions