At 2:00 am on Father’s Day 2018, I woke up to a government alert blaring on my phone. I picked it up and read that there would be flash flooding due to heavy rain in the area and to stay off the roads. I didn’t think much more of it—I was in bed and not planning to drive anywhere, and I was too tired to comprehend what it really meant.

I didn’t sleep very well after that, though. They weren’t kidding about the heavy rain! It was loudly pounding on my roof and I could hear the water rushing down the hill outside my bedroom window. And the thunder! Still, I didn’t worry too much—it was just a rain storm, right?

Finally, around 5:30 am, I stopped trying to sleep and picked up my phone. I opened up Facebook and the first status I saw was from a friend who lives across town from me.

What? I couldn’t wrap my mind around what she was saying, but if her cars were floating what was happening to mine? So I got out of bed and opened my front door.

I was completely shocked by what I saw. It looked like an earthquake had happened outside my front door. I live on a steep hill, and the flooding had demolished it. The street was completely destroyed, pipelines were exposed everywhere, and a raging waterfall was cascading down the hill. The above video was taken about a half hour after I first saw the damage.

I ran back into the house and woke up my husband. I guess I sounded pretty alarmed because he leapt out of bed and ran out of the house. After that point, it was all a blur. We started calling and texting friends to make sure they were okay. As the stories started to roll in, I recognized how blessed we were that our road took the brunt of everything—aside from a little bit of water in one corner of the basement, our home was not damaged at all. The destroyed street had saved our home. 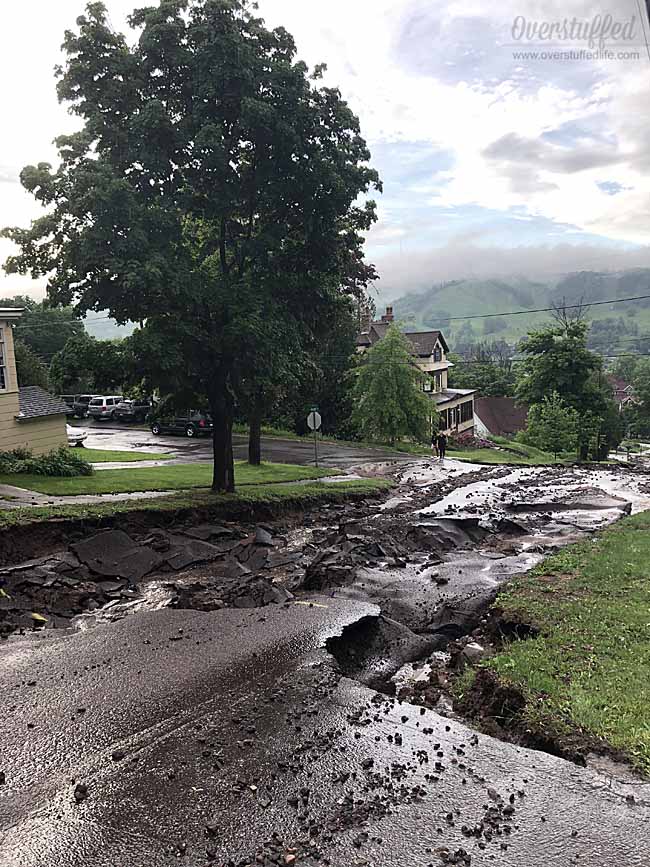 These were just the stories of people we knew well, but there were plenty of others. Throughout the day, we walked around town to see people’s cars buried in feet of mud, homes and business with extensive damage, and so many lovely people. The whole town came together in a way that only shared tragedy can facilitate.

By the end of the day, hundreds of people had walked over to our street to see the damage (it was one of the worst hit streets in the area). It was quite a sight to see so many people with their umbrellas and dogs milling around my front yard—it was a veritable tourist attraction! Jimmy Johns even sent employees to our street with sandwiches for all.

In the evening, the water had finally slowed down, but our street was even more damaged than it had been in the morning because of all that rushing water. We had already planned a Father’s Day barbecue for our opera festival friends, and we chose to go ahead with it even though not everyone could make it.

I will never forget Nancy and Dianne coming to our home that night. They were in utter shock. We fed them, listened to their experiences, and then helped them get to another friend’s to stay the night. We couldn’t find anyone who had a car available to drive them, so Joel and I decided to walk them over (about a mile and a half). When we left the house with them, we noticed a police car on the street above our house so we walked over and asked if they could give them a ride, and of course the police were happy to help. 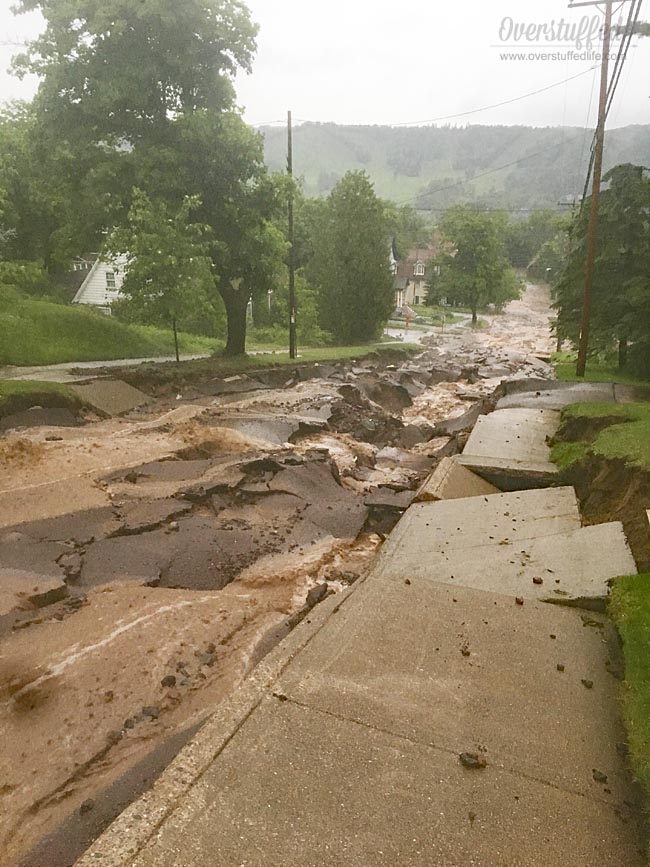 I will also never forget Sophia’s two best girlfriends spent the night that night. They spent it frantically checking for updates on Thatcher and crying a lot. They were full of such hope for him—he was really hanging on for the first day—but it was so hard to see them grappling with such an awful thing. Even harder when they found out the next day that he wasn’t going to make it. You’re not supposed to lose friends before you even start 7th grade. 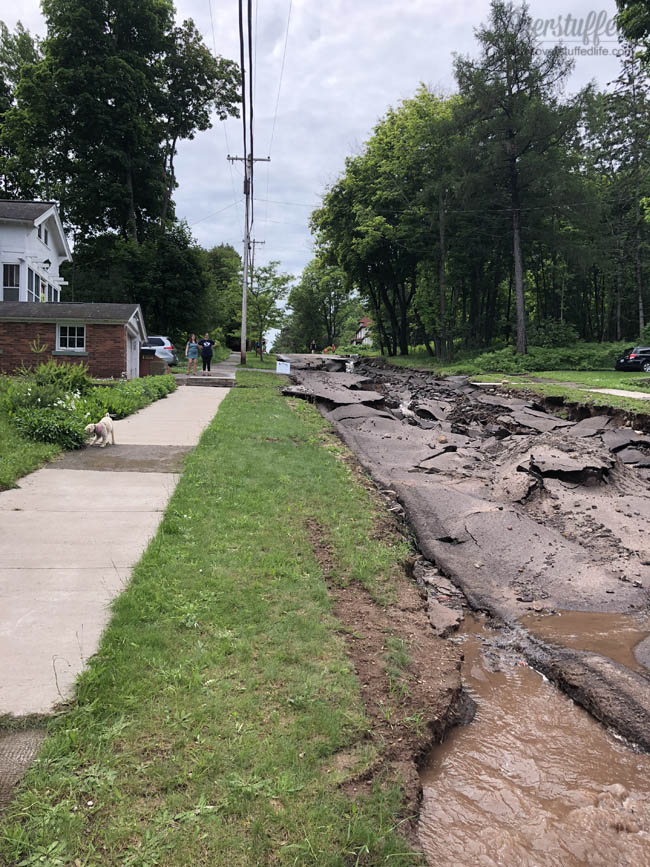 Our minivan was stranded on our driveway. We thought it would be months before we were able to use it again, but the police said we should try to drive it up the sidewalk. I was terrified of this. I didn’t think it would fit between the stone walls and the telephone poles and I was worried that the sidewalk would cave in since so much of the dirt had washed out from the road next to it. Besides, we had plenty of offers to borrow cars from friends. I thought it was smarter to just leave it where it was.

I couldn’t look—but Joel and several of our opera buddies managed to get it to higher ground and to a spot where we would be able to drive it on the streets that were undamaged.

In the days, weeks, and months to come we watched our area rebuild. We volunteered several times to clean up debris, muck out flooded homes, and move rubble from streets. The above photo shows two of my daughters and their friends getting ready to mobilize from a local church which became the flood relief center for several weeks.

Want to be prepared in an emergency? Download a bundle of emergency preparedness printables here.

Holy Week Free Easter Printables
Next Post: How to Communicate with Your Strong-Willed Teenager