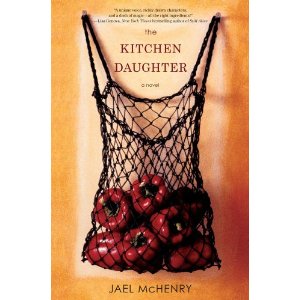 What does normal even mean?

I have often wondered this in my life, and I admit to spending time worrying that I don’t fit in with the “normal” people and trying to figure out how I can become more normal.  But, I’ve come to realize that what is normal for one person may not be normal for another, but it’s all good.  How boring life would be if we all fit into the same mold of normal!

The Kitchen Daughter, by Jael McHenry explores this notion of normalcy and its elusiveness.  Ginny, undiagnosed with Asperger’s Syndrome, feels she is normal.  When people ask her what is wrong with her, or what she has, she always answers, “a personality.”  Personally, I loved that.

I have not given much thought to what it might be like to be on the autism spectrum, but McHenry’s brilliant narration allowed me to be inside Ginny’s head and get a taste for how it might feel to have Asperger’s.  Ginny’s character was incredibly endearing, and has taken a firm place in my list of favorite literary characters.

When Ginny’s (overprotective) parents are both killed in an accident, Ginny is left alone to deal with her younger sister, her emotions and all the many shades of normal.  When Ginny’s late grandmother’s ghost appears in her kitchen during the wake because Ginny has made her recipe for bread soup, she learns it is normal for her to see ghosts when she cooks their recipes.

And thus begin her adventures in this amazing debut novel written by food blogger Jael McHenry.  It is at once a culinary novel (recipes included!), a mystery novel (ghosts included!) and one that has the potential to change your thinking, and possibly even your life, as you read about Ginny’s quest to find out about herself, what normal means to her and how to finally live life and accept herself for who she is.

When Lisa from TLC Booktours first emailed me about reading this novel, she mentioned that the publisher (Simon and Schuster) was very excited about this book, and that it was a favorite around the office.  I can definitely see why.  In fact, when I added it to Goodreads, I noticed that it already has a 4.17 star average, which on that website is excellent.  I predict that this book will be making a big splash this year, and I highly recommend reading it.

The publisher is giving away a copy of this book to one of my readers.  Want to win?  Leave a comment telling me something that is normal…anything.

I received this book from the publisher via TLC Booktours.

The winner of When Did I Get Like This? by Amy Wilson is Amanda B.  Congratulations!!!

Normal is being as puzzled by raising a 5th child as I was raising the 1st one.

messes in a house with kids

My normal is picking up as much as possible with my feet so I don't have to bend over.

There's no such a thing when people are involved. Who gets to say what's really normal in this crazy world?

Hmm, normal… starting out on Monday with the best of intentions, and watching them evaporate before Tuesday even starts? 🙂

Normal is your baby trying to eat a french fry out of your hand, and your taking it away because you don't want his first solid food to be a french fry.

Or maybe that's just my life.

Wanting to read all of the great books you review on your blog and never having enough time is normal for me. Thinking (hoping!) that someday I WILL have time to read lots of books is both a sad and happy thought.

Normal is being grateful if I finish half the things on my to-do list by the end of the day.

And this book sounds really interesting because I love to cook and I have a nephew with Asperger's. Oh, and I like to read.

Normal is…still expecting your kids to do their regular chores even when it's sunny outside (finally!) and their "friends don't have big chores like they do".

I guess I have to agree that normal is different for everyone. I guess for me normal equates to comfortable. Normal is my husband kissing me goodbye before bed, my kids hugging me before going out the door, eating dinner with my family. Normal is just "normal" 🙂

Lara, I have occasionally worried that I didn't fit into some "mold" and was one time sharing those worries to an older and wiser woman who told me she felt that since Heavenly Father created millions of different kinds of bugs 🙂 He obviously delights in variety, then it makes sense that His greatest creation wouldn't all come from the same mold either. I'll never forget that and I have been much less concerned about being "normal." 🙂

Normal is.. when it comes down to it, we are all normal.. in our purpose of why we are here!

Normal for me is cleaning like a crazy person UNTIL 7pm, then I just completely give up and I have to start all over again the next day. I get REALLY tired and that is my normal. I wish it wasn't.

My normal is staying up until 1am watching my snails mate, yes, I'm a freak! It was so cool!

My normal is falling on the floor and crying like a baby when I unknowingly crushed one of my baby guppies with the gravel vacuum:(

Normal is me wanting to go to bed early on Friday instead of going on a date:)

My cousin has autism and it's been hard for his mom. I'm curious about this book and whether or not she'd like to read it.

Normal for me is trying to type one-handed because baby won't let me put her down.

I would love a copy of this book. I just read Jodi Picoult's latest, and her protagonist was a boy with Asperger's. I thoroughly enjoyed it. This book sounds really good, too.

Normal is something that has always eluded me, or at least my visions of normal. But, the most normal thing is that my husband plays with our son, something that my dad, didn't really do.

Normal to me is the way it felt when I married my husband and began sharing a life in earnest with him. It was new but felt like this was the way it was always supposed to be and that my life would never feel right and normal if he were not a part of it.

It does sound like a great book. (I just got the sample for my Kindle so I won't forget to check it out!)

Normal is needing to cook a meal but just not wanting to… ever!

Normal is couches off all the cushions all the time so the boys can be super heroes.

The heat and humidity- that's normal in Florida.

Normal is waiting until you're almost 40 to go to Disney World for the first time! 🙂

Sounds like a great book.. Will have to keep my eye out for it.

I guess "normal" is not a PC word when you have special needs kids. I was corrected by a mom at school for using it once, a few years back. The correct word is "typical" when describing the behavior of a kid who does not have special needs. I did not know but did understand the reason for the distinction.

Thank you for the great review, and for being on the tour!