We just arrived home last night from spending a week in Chicago.  We’re completely exhausted, but only because we had a ton of fun and did as much as we could possibly cram in for the week.  I took hundreds of photos (the only reason the number isn’t in the thousands is because I totally forgot to bring more than one CF card for my camera) and we made millions of memories.

Hopefully, I’ll get a chance to go through all my photos soon and post about our adventures here.  Except, remember how we went on a cruise in January?  And remember how I’ve only posted the first three days of that vacation?  Yeah.  Maybe I shouldn’t make such grandiose promises.

So, just in case I can’t make good on the promise, here are a few highlights, courtesy of my phone and Instagram.

The highlight of the trip, of course, was the American Girl Place.  The girls had been working hard all summer to earn money to spend there, and they were so giddy with excitement that I was glad we had one adult per child most of the time.  We went a total of three times.  Once with just our family, and later with my mom (she flew out to Chicago and met us there for the second part of the week). 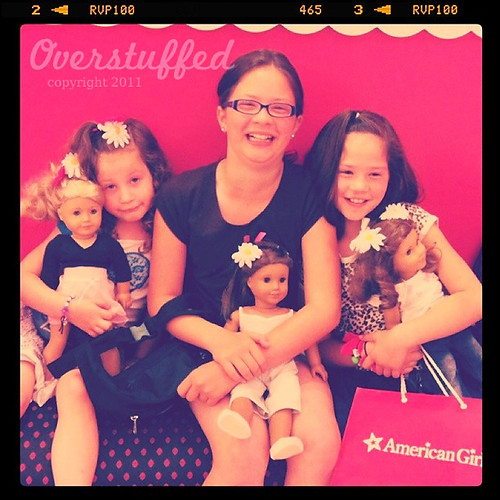 The very best part was going to dinner there.  I could never have imagined how neat it would be.  I did imagine how expensive it would be, but every bit of money spent was totally worth it.  We did it on a whim at the last minute and I am so glad that we did.

The highlight of the trip for Joel was going to the Ravinia Festival to hear the Chicago Symphony play Tchaikovsky.  Being there meant being lost in a “sea of humanity” (I thank my friend MaryFran for coining that particular term), but it was really wonderful to be there in the park and to listen to such wonderful music. 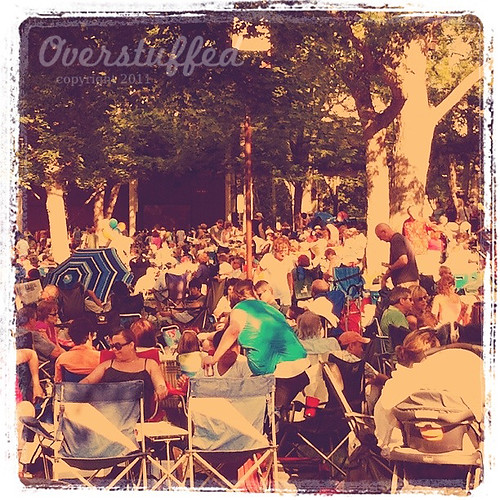 Joel didn’t sit with us, instead he went up to the edge of the amphitheater and watched the symphony.  It was hot and muggy and uncomfortable, but watching him smile like a girl in American Girl Place was worth it to me.  And hearing the real cannons at the end of the 1812 Overture.

Me?  I was just happy to be with my family.  I enjoy being in big cities, and this time was no different, and I had a great time. 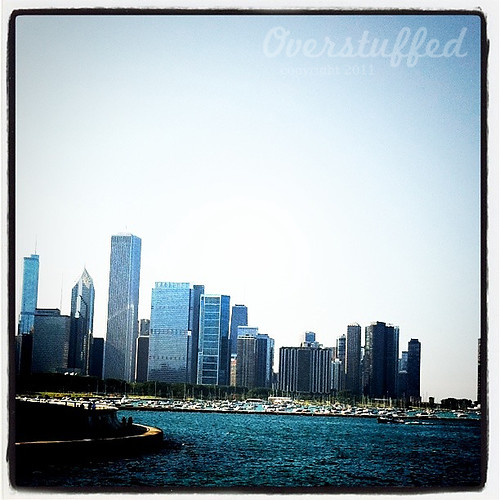 On Habits and Hope
Next Post: Wednesday Afternoon at the Art Institute »
Subscribe
Login
11 Comments
Inline Feedbacks
View all comments

That looks so fun! I would love to go to Chicago.

I love that first picture. When we go on trips everyone is waiting to "get there". For me the open road, framed by lush greenery and the blue sky with puffy marshmallow clouds… nowhere else I'd rather be.

Wow-I'm not sure which I would love more. I LOVE the Overture of 1812—how amazing to hear it live like that. But I was addicted to American Girl stuff growing up and think even now I would love being in that store.

My girls would have been hysterical with your girls at the American Girl store. I would been drooling with your husband at the 1812 overture with live cannons. And I think I'm going to have to try Instagram because I love the photos. The end.

Ah vacation! Is there anything sweeter? So glad you and Joel and the girls had an amazing one!!! Ellie has been to the American Girl Store in NYC and Sadie is patiently waiting for her trip with Grandma.

FunFunFun!! Our family still needs to take a vacation this Summer. Not sure if it's going to happen.

I loved your cruise pictures and hope to see more 🙂

Your pictures are great – especially that first one. I’ve been a blogging slacker lately. Jeffrey and Sloane were gone for two weeks and I found myself completely absorbed by house projects; an unintentional blog break. Now we're on a long, long road trip. We’re in Arizona now and I have a bit of time on the computer – finally! I was having withdrawls from being away from my blogger buddies so long, I tell you. I hope your summer continues to be as wonderful as it sounds here. Love to you and yours.

These pictures are FABULOUS! 🙂 The first picture at the top with your feet (I'm assuming) is great — it would look so good in a frame on my wall!

Mmmm, looks like fun! I could seriously use a vacation.
I think we may go somewhere in OCtober over our fall break.

That does look like a great vacation. I had no idea American Girl stuff was so cool. I'm sure I will figure it out very soon when Kaitlyn gets older 🙂

Tchaikovsky is my second favorite composer. Rachmaninoff is my first favorite. Sigh. That would be dreamy. I love the symphony. Absolutely. Even in hot muggy weather. The music just puts you in a different world. What a wonderful vacation you had.