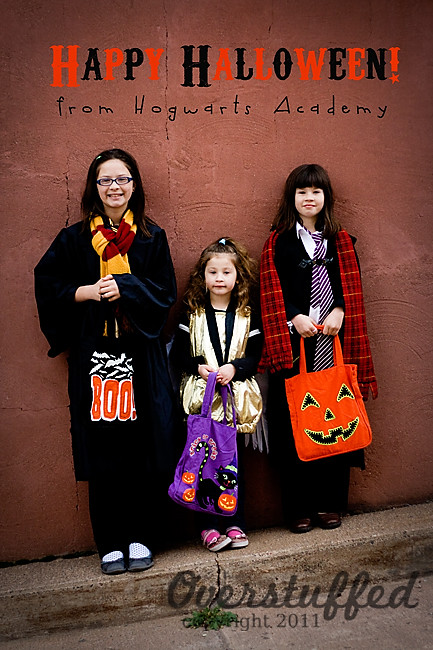 And indeed they did–for the first Halloween party they were invited to, which took place on October 22. Bria went as the same vampire she went as last year (except she’s grown so freaking tall that the skirt was now about 3 inches too short). Chloe used the Ginormica costume, and Sophia found an orange and black witch costume that she was happy with. Oh how I love seeing things reused!

But they really and truly had their hearts set on Harry Potter.

So frazzled mommy got to work. Mamah had purchased them each some HP accessories: Bria got a Gryffindor tie, Chloe got a wand and some Harry glasses, and Sophia received a Golden Snitch. I posted on FB to see if anyone had any robes and stuff and got two answers. One robe and scarf that would work for Bria that she could borrow from a local friend. And a friend I’ve known since Elementary School who lives several states away said she had a robe and scarf sitting in her Goodwill pile and would be happy to send it. And so she did. She totally saved Halloween (and they fit Chloe perfectly). Daddy had a tie in his closet that was close enough (though probably too long) and that took care of Hermione and Harry. Except, Chloe decided she didn’t want to be Harry anymore, so she was just “some kid in Gryffindor.” Excellent. 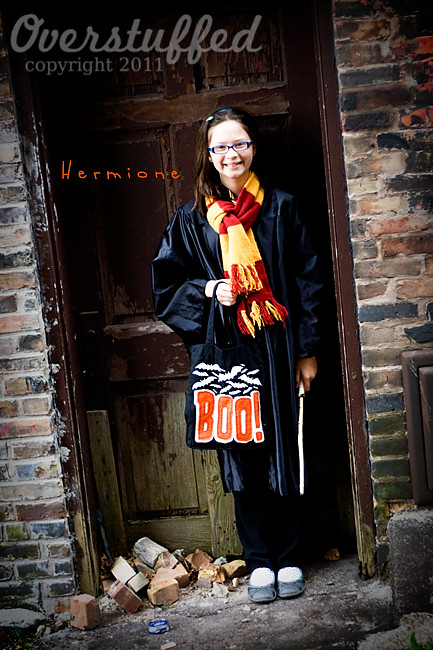 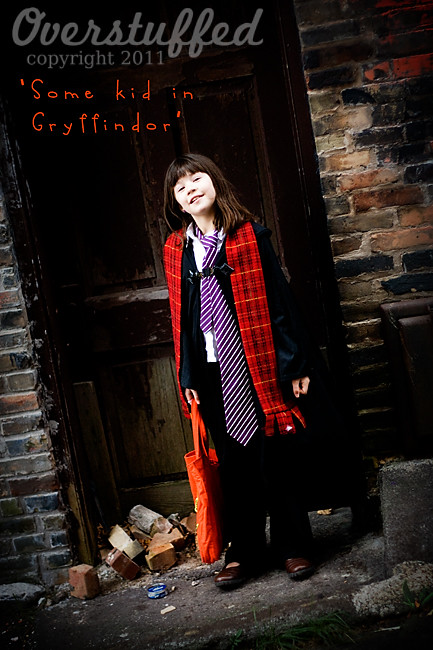 Now, what to do with Sophia?

Well, she had this Golden Snitch that Mamah had brought her, so she became dead set on actually being a Snitch for Halloween. Which left me in somewhat of a quandary, but then I went and bought some golden material and dug up the pattern I had used so long ago to make a pumpkin costume. I found some angel wings at the store and made a golden snitch necklace and in just a few hours, the Golden Snitch was born. And let me tell you, she was the fastest golden snitch in Quidditch history. Every time she put on that costume she raced around faster than lightning. But everyone who realized what she was thought it was the greatest costume ever and she felt very special. And I must say, it was rather unique. I certainly didn’t see another snitch, even though I saw a million other Hermiones and Harrys and kids from Gryffindor.

For more complete directions on how to make the Golden Snitch costume, click here: How to make a Harry Potter golden snitch costume 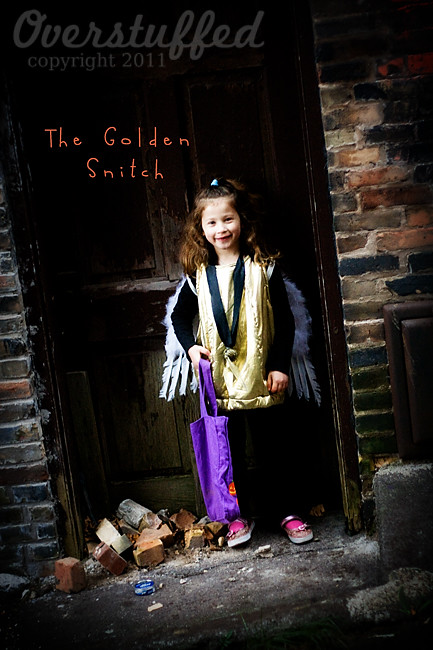 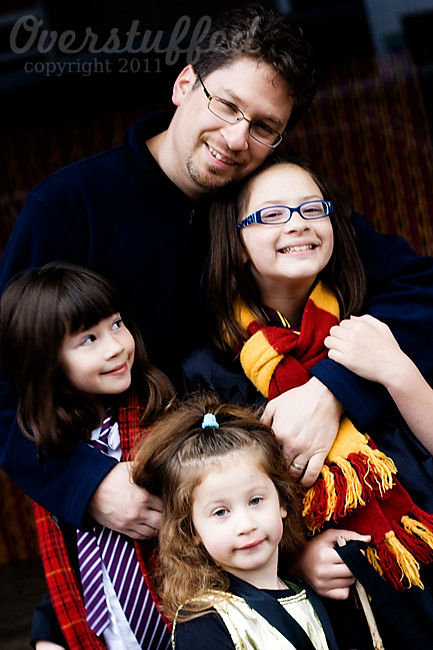 You Are Not So Smart
Next Post: The Smartest Woman I Know

Oooh! Those are absolutely darling costumes. Color me impressed! And I think the pictures turned out wonderfully.

My girls are doing Harry Potter too, except my oldest was determined to be Luna and my middle daughter wanted Ginny. Thank goodness for Amazon and long blonde wigs.

These are crappy pictures? Not!

Cute cute!! I would have never guessed the snitch! How fun! And the pictures are great but I totally get the photography obsessed brain!! It has to be perfect! 😉

Fantastic! I love it when kids come up with their own costume ideas—they're always better than anything I could come up with. LOVE the snitch costume—Happy Halloween!

You are unbelievably talented. Truly. Is there anything you put your hand to that doesn't turn out brilliantly??

Our family did that theme, as well! My son was HP, my daughter was a Burrow's Lawn gnome, and my husband and I were Lily and James Potter.

They look awesome! I love their costumes and Kanoa wishes he was apart of their hogwart halloween!