Day 1 started bright and early.  We had packed the car the night before (and believe me, packing for 26 days that include camping, cruising, and staying with family is no easy task), dropped off Puccini at a friend’s house (you’ve never seen sadder girls), and were ready to head out by 7:00 in the morning.  Of course, we didn’t quite make that goal, but I’m pretty sure we were out by 7:30.  Oh!  I just checked my planner and I wrote down that we left the house at 7:23.  That, for us, is big. We never leave less than two hours before we said we would.  I guess there’s something to packing up the night before, huh?

The girls weren’t too thrilled about leaving so early.  Especially since in the summer they never go to bed before dark, and dark is pretty late.  So, they slept the first few hours of the trip:

The pink monkey blob is Sophia, the blue blob is Bria and the light one is Chloe.  We hadn’t even left town yet (that stoplight is just past our local WalMart) and they were completely out.

It was nice to stop a good two hours later for breakfast.  Except, there was a schnoodle (same breed as our puppy) in the car we parked next to, and that made the girls cry for Puccini all over again.  I was seriously beginning to wonder how we would get through four weeks without her.

After breakfast, we crossed into Wisconsin for a bit, and then we entered Duluth.  I always like that bridge, so I took a picture of it.  (By the way, I pretty much just Instagrammed this entire vacation.  I only got my big camera out sometimes, so most of the pictures are courtesy of my iPhone and Instagram.) 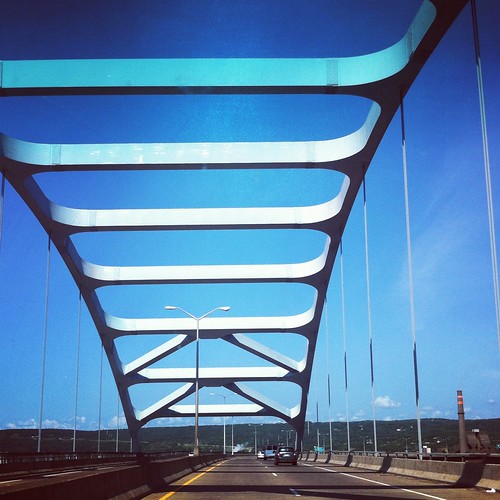 After driving through Minnesota for a while, we ended up in St. Cloud where we met one of Joel’s best friends for lunch.  I should say that we were served a lovely lunch at his house, which was so kind of him! 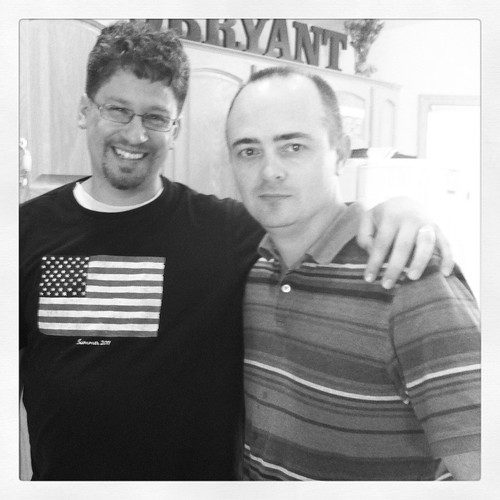 These two did their MM degrees together at BYU, and then, amazingly, both moved on to Arizona State, where they did their doctorates in orchestral conducting together, right up to graduation day.  Unfortunately, his wife was out of town, so I had to sit and listen to the two maestri talk shop.  No biggie, though.  I’m used to it. 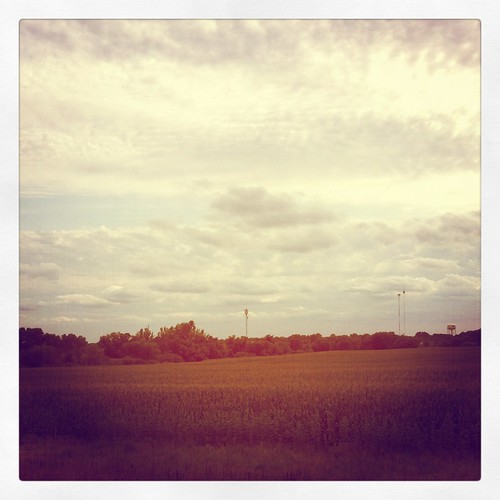 This is good news, because we are planning on camping at the Laura Ingalls Homestead in DeSmet, South Dakota of Little House on the Prairie fame.

The girls have been such great travelers so far.  They’ve drawn in their journals (which were very well documented the first half of the trip, and the last half not so much), listened to music, played Battleship, and watched movies. 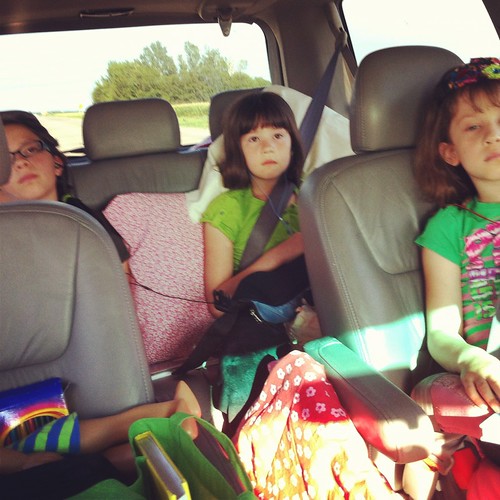 They were seriously amazing on this whole trip.  I guess that’s what having children older than six is like on a road trip!

The last 50-mile stretch of Minnesota highway was under construction.  Which meant DETOURS.  We seriously went over 100 miles out of our way on all of these crazy detours!  And we had been making such good time, too!

Now that arrival before sunset was shot to heck, we just enjoyed the setting sun once we entered South Dakota.  Because it was pretty stunning! 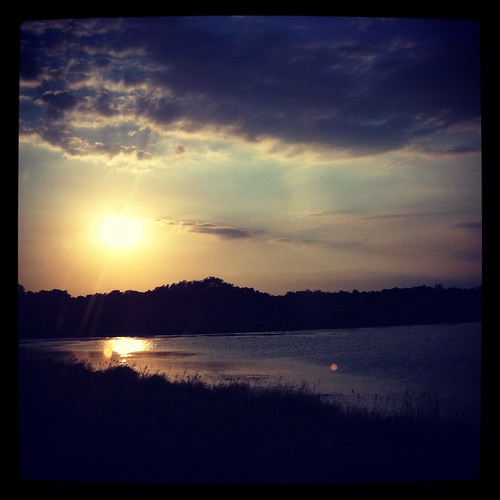 iPhone and Instagram don’t do justice to sunsets, in my humble amateur photographer opinion, so I made Joel stop the car so I could take some pictures with my real camera. 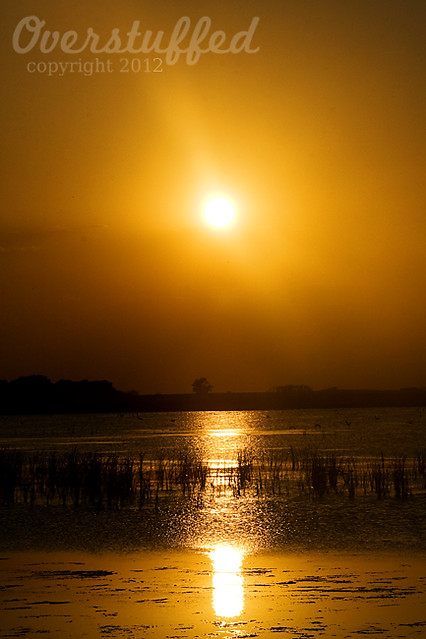 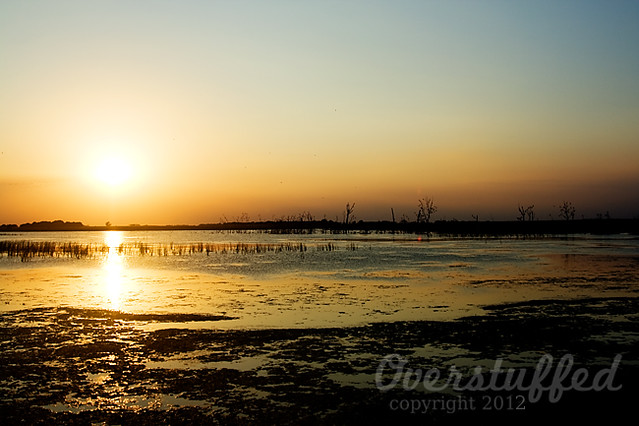 The main reason I wanted to stop was because we passed this pond/swamp area with trees, and on the trees were hundreds of birds. 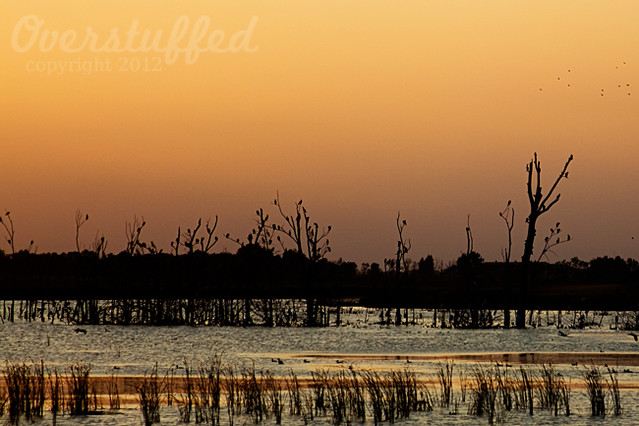 Their silhouettes just looked so beautiful against the setting sun.  So I made Joel turn around and let me get out and take some photos.  He didn’t mind, and while Suite: Judy Blue Eyes by Crosby, Stills, and Nash (that is one of our favorite road trip songs) was blasting from the car, he took pictures of me taking pictures. 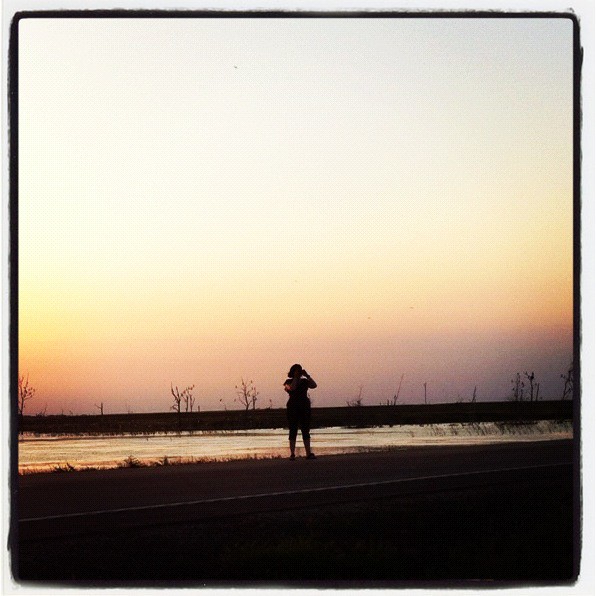 And then, I had to turn around and take a picture of the beautiful landscape to the east as well. I never knew how beautiful South Dakota is! 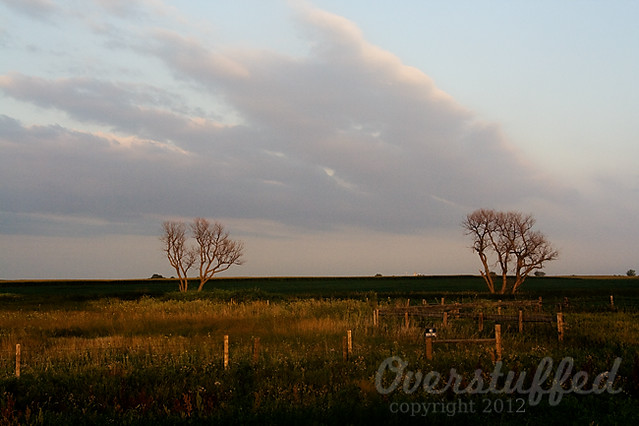 Not long after our photo stop, we finally arrived in DeSmet, where we had to ask directions to the Homestead, but eventually got there.

I can’t really describe how excited I was to be on the same land that Laura Ingalls herself walked on.  To see with my own eyes some of the scenery that was in my very favorite childhood books.  I’ve been reading them to my girls this summer, and they were pretty excited, too.  But I cried when I got my first glimpse of Laura’s prairie. 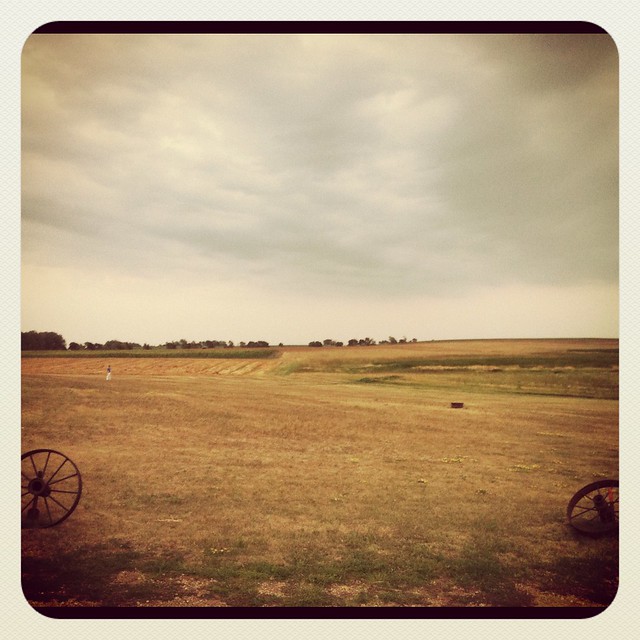 But, I didn’t have time to dwell on it, because we were losing light fast, a storm was blowing in, and we had to get our tent up!

Thank goodness for nice campsite neighbors, or we would have been in trouble.  A man and his three teenage boys helped Joel get the tent going while I unloaded sleeping bags and such and threw them in.  Then Joel and I had to get the rain fly up by ourselves in the dark and the wind, which just kept getting darker and windier!  By this time, we were a little frantic in our effort to beat the storm, and the tent wasn’t cooperating well in all the wind, but we managed to finish, get in and zip it up just before the rains came tumbling down.

We had planned on cooking dinner at our campsite, but the detours and the rain took care of that for us, so I just dug through the cooler and came up with hummus and crackers for dinner.  The girls love eating hummus and crackers (thankfully), and it was a grand adventure eating them in our tent in the downpour on the prairie.  So, no complaints about our non-orthodox dinner.

The girls were a little scared of all of the thunder and lightning, but it passed quickly, as midwestern storms generally do, and everybody finally fell asleep.  Well, everybody except me.  I stayed up worrying and thinking and listening to the next storm roll through…

I had a little gasp just seeing the picture of the prairie. Mucho jealouso.

Sounds like a really wonderful start to your vacation. I didn't realize Laura Ingalls prairie was in South Dakota, otherwise I would have made sure to visit when I lived in Montana. I guess I missed out! Can't wait to hear more about your vacation.

My favorite book series was Little House also. I visited her and Almanzo's homestead in Missouri when I was a child and I loved that, but I haven't been to DeSmet yet, which I REALLY want to do. I'm so glad to hear it was a good experience…maybe we will do it next summer.

I adore the Little House books!! Some of my earliest memories are of reading them with my mom. So far sounds like your trip was fun and exhausting and amazing:)