Are you shelling out the big bucks for music lessons only to have your child not practice? We sacrifice so much so that our children can have good quality music instruction, and it really frustrates me when they refuse to practice.  But it turns out that there are several very legitimate reasons why a child will shy away from practicing. Figuring out why practice isn’t happening is half the battle! 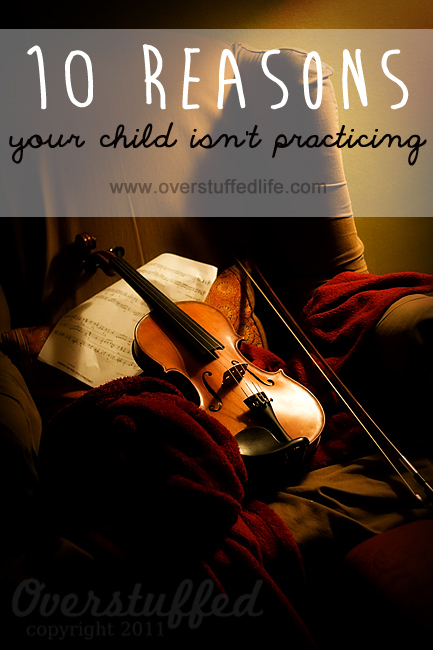 Here are some common reasons for a child not to practice–and ideas for you as a parent to turn things around:

1. They don’t know what to practice.

Keeping track of everything a music teacher says in a lesson can be overwhelming for a child. Many music teachers will write things down in a notebook, but just as many do not. If your child is struggling with knowing what to practice at home, there are several ways you can help.

2. They don’t know when to practice.

Making a set time in your schedule for practicing is essential for practicing success. Otherwise, you are just competing with a bunch of other stuff for time and practicing always loses. At least, that’s been my experience.  Bria practices at 6:15 in the morning. Chloe practices after dinner. And Sophia knows that her practice time is right after she has her snack and finishes her homework after school.

Not only is there much less to compete with, your children will stop fighting you about practice time when it’s just a part of the schedule. I don’t even have to ask my kids most days (unless her name is Sophia, but she’s getting closer…it’s a process!).

3. They don’t know how to practice.

Practicing correctly is a learned skill. It is not just playing a song over and over, mistakes and all, which is what I have found my children will do if I don’t help them understand a better way. Practicing in such a manner will only solidify mistakes and make them even more difficult to overcome.

Instead, teach your child to take the song apart and practice a measure or two at a time–especially the more difficult passages. If your child plays the piano, insist that they practice one hand at a time before putting both hands together. If they are struggling with a particular technique (bow hold, embouchure, breathing, etc.), work with the teacher to find ideas to isolate those things during practice.

The other day Chloe was really having a hard time with a piece she’s been working on. I made her slow it down and play a couple sections perfectly ten times in a row. If she made a mistake on one of her repetitions, she had to start over. Just getting it right once isn’t enough to “perfect” the right way. If you’ve played it wrong more times than you’ve played it correctly, you’re more likely to play it wrong the next time you do it. Practice does make perfect, but sometimes you’re perfecting mistakes.

4. They don’t know where to practice.

Maybe for children studying piano this isn’t so much of an issue, unless you have many pianos in your home. But for the students who have more portable instruments, it can pose a problem. It may be difficult for them to practice in one of the more public areas of the home because there is too much going on to distract them from other family members. This is another reason Bria enjoys practicing so early in the morning–nobody can bother her with all their noise and coming in and out of the room.

The simple solution is to help them find a place where they can concentrate. Sometimes my girls want to practice at the same time, so Bria might go upstairs while Chloe is on the piano. Sophia likes to practice wherever I happen to be whether that’s the kitchen, my office, or my bedroom.

5. They don’t know why to practice.

The best reasons to practice are the ones that come from within. Practicing just because it makes you happy as a parent or to earn privileges or allowance aren’t always the best motivators, though they certainly can be. (I finally stooped so low as to include practice as part of allowance just recently–and it’s working.) Help your child find his or her own very personal reasons to practice and they will be a lot more likely to do it.

Bria, at age 13, has been at a point where she doesn’t get so frustrated for a while, but I still deal with regular tears and tantrums with Chloe and Sophia. Usually just one day of sitting next to them and really walking them through things is enough. If you aren’t musical enough to help out in this way, that’s okay too. Remind your child that every piece is hard before you learn it and help them work through it in small chunks. Chances are that they have the tools to do it themselves anyway, but looking at the whole thing is too overwhelming. Just being there as a calming influence is often enough for them to forget the frustration and start figuring it out.

Depending on the kid, this can be huge. My Chloe has to have fun in everything she does. It’s her primary motivator. My other two are a little different, but they certainly don’t mind making practice more fun. After all, a “spoonful of sugar helps the medicine go down,” right? Mary Poppins really knew what she was talking about.

I’ve written about this a little bit HERE, but I am constantly making up little games on the fly to help make the practice sessions more fun. And a little fun music goes a long way, too. Find out what music your child is loving lately and see if there’s an arrangement available at their current level. My kids love this.

If your child is having trouble learning to read music, don’t just drill flashcards. Flashcards are tedious and boring and absolutely no fun at all. Turn it into a game! Tape a music staff on your rug with masking tape and then throw a beanbag at it. Your child must then tell you which note the beanbag is on. Or make a memory game which requires them to match the note on the staff with the letter-name.

The main thing here is to be creative! As soon as your child realizes how much fun they’re having while practicing, they won’t want to quit!

Like I said above, I just recently started paying my children to practice. It’s made a difference in their attitudes and the amount of time that they put into it. Money is a definite motivator.

When Bria was first learning violin as a 3-year-old, M&Ms were her motivation. I would put a handful of them on the piano and she would get to eat one every time she repeated a Twinkle Variation. Depending on how many were in the handful, we would get a lot of repetitions in and she didn’t care at all! She was just excited to get to eat a piece of candy!

Other motivations can include recital preparation, or planning on playing for a relative visiting from out of town. Sometimes my girls even do little recitals for their grandparents over FaceTime. They love getting the praise from their favorite people in the world, and they will play for them anytime.

We have also been pretty big bribers where public performance is concerned. My kids know that they usually get some sort of reward for playing in a big recital. Bria recently played an entire concerto in a solo recital and earned herself a cute hat. Chloe is playing in an adjudicated piano festival next weekend and wants a tiny little Macbook for her American Girl doll. Sometimes all they want is a milkshake after their performance and life is good.

Still, intrinsic motivation is the best. If you can figure out what that is for your child, you are home free.

This might be one of the most important things to making practice successful. If your child is exhausted during their practice time, nothing is going to be accomplished! Find a time where their energy is naturally more up. For Bria, this is at 6:00 in the morning. For Chloe it’s at midnight. And I’m not kidding, I let her practice at midnight on weekends and during the summer. As a fellow night owl, it doesn’t bother me at all. But during school she usually is fine to do it after dinner. Sophia is still a work in progress. She is usually a mess after school until she eats something, so we do it after her snack and homework and that’s working for us right now.

10. You are not involved enough as a parent.

Sometimes I just sit and fold laundry while they are practicing so I can help them. I can easily hear mistakes and help them correct while I am just sitting on the couch folding. You’ll often hear The Maestro yelling from the kitchen to “do it again with the metronome” or “you’re out of tune–use a low 2!” But, again, just because you don’t happen to be musical doesn’t mean you can’t be involved in your children’s practicing.

One of my favorite books is Helping Parents Practice by Edmund Sprunger. It’s full of great ideas for musical and non-musical parents alike. Just be there for your child. After all, their music lessons are a huge investment of your money–you should be willing to invest a little bit of your time as well.

Our Newest System for Chores and Allowance

40+ Budget Categories to Help You Save Money
Next Post: Gluten-free BYU Mint Brownies

awesome list!! My LO is only 16 months, but I can't wait for her to start playing the piano. I use to play but like many of the situations on your list were happening to me…I defiantly think that being an involved parent is the best & that is why I tell my fiancé that I will be taking lessons as well. We can practice together 😀