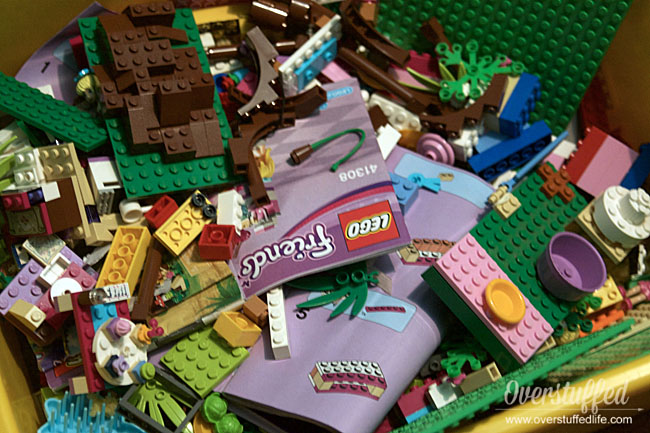 My 11-year-old daughter, Sophia, has had a renewed interest in playing with LEGO lately. She is really enjoying building the sets we have and then breaking them down and coming up with her own awesome creations.

I recently received a Disney Princess Moana’s Ocean Voyage set from LEGO, and she was so excited to get it built! She loved the movie, and since she has a bit of Hawaiian heritage from her Dad’s side (and even a Hawaiian name of her own to match), Moana is now her favorite Disney Princess. Sadly, we had to wait until school was out, but on our first free morning of summer I found her in the back room happily working on it while still in her pajamas. 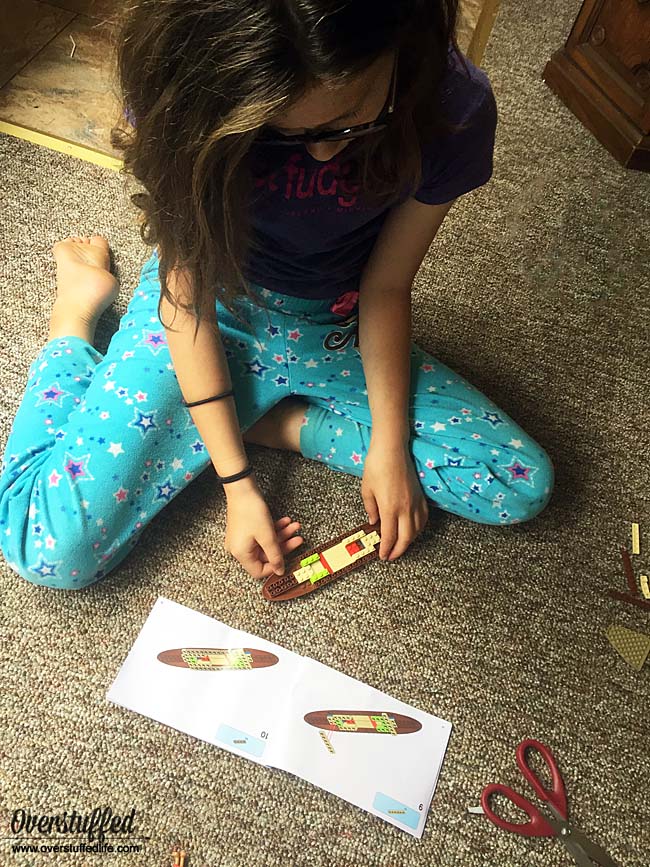 It’s a bigger set than some of the ones we already had (we have a lot of LEGO Friends, having all girls), so it took her a couple hours, but she finished! Her older sisters even helped her a bit here and there. The finished product has been proudly on display in her room ever since!

Pretty awesome set, isn’t it? Sophia is in love with it. 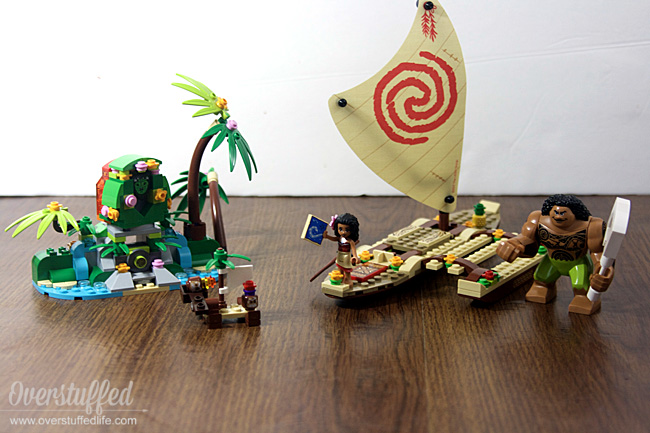 As we’ve been getting things more clean and organized this summer, I started to realize that we had LEGO all over the house. I would find random pieces in almost every room, and Sophia’s LEGO creations were also everywhere. We started getting things consolidated and organized in the toy room, where I try to get rid of toys the kids are not playing with anymore often.

One Idea for Sorting and Organizing LEGO

During this job of sorting toys (that is always bigger than you think it will be!) I discovered our LEGO organization was non-existent. It frustrated the girls, because all the LEGO pieces were just thrown into a bin and even the instructions to the sets were tossed in the bins, too. We’ve always had a bin for just the LEGO, but we were starting to have too many and it was becoming very difficult for the girls to find the pieces they wanted for their current creations.

Chloe and I decided to tackle the problem one day, and if I’m being honest, we had no idea what we were going to do to get the LEGO more organized, but we figured sorting them would be a good place to start. 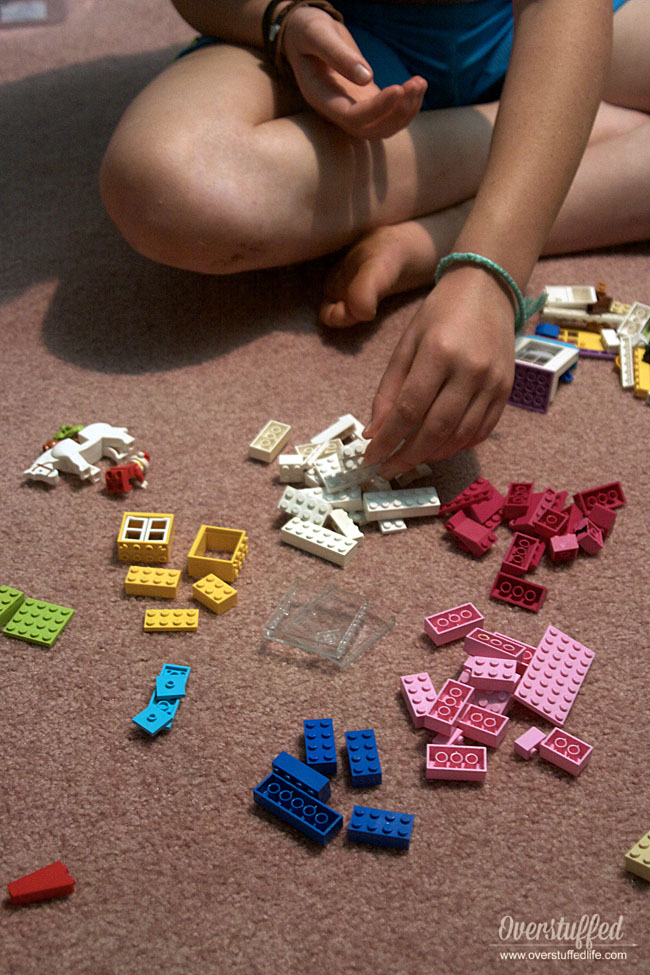 But then we realized there are several ways you can sort LEGO! So, we ended up sorting them mostly by color, but also made piles of minifigures and special pieces like wheels and doors and leaves.

We have a lot more LEGO than we used to have, but we still don’t have a lot by many standards—I’ve got a friend who has an entire room in her house that is just for LEGO! For us it made the most sense to just organize them by color. Obviously, we couldn’t just sort them and then throw them back in the bin, so we had to make a trip to the Dollar Store to buy some cheap containers to keep the LEGO in.

We ended up buying four rectangular containers with lids, and three plastic jars with screw-on lids.

I brought my laptop and my favorite Plug-n-Play label maker up to the playroom, and we worked on making labels for the containers we had purchased. I love this label maker because you can use any font already installed on your computer, and while I didn’t choose any super exciting fonts for this project, I love that I can. 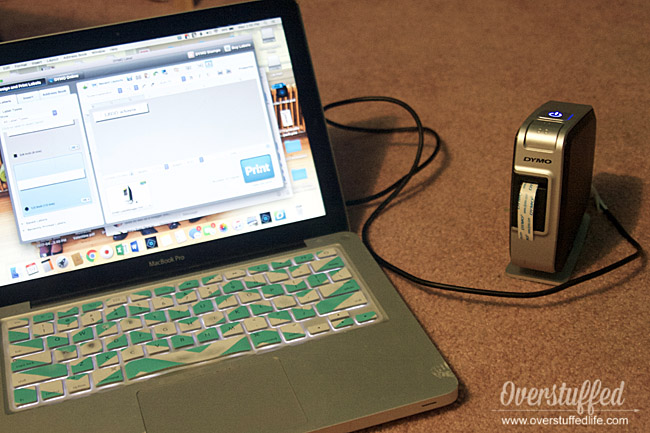 We decided on the following organization for our LEGO:

Minifigures (including any animals)

For now, the instruction booklets went into their own bin (I use a toy sorter with multiple bins like this one—it has served us well for about 16 years!). I may put them into a binder someday, but this works for the time being. 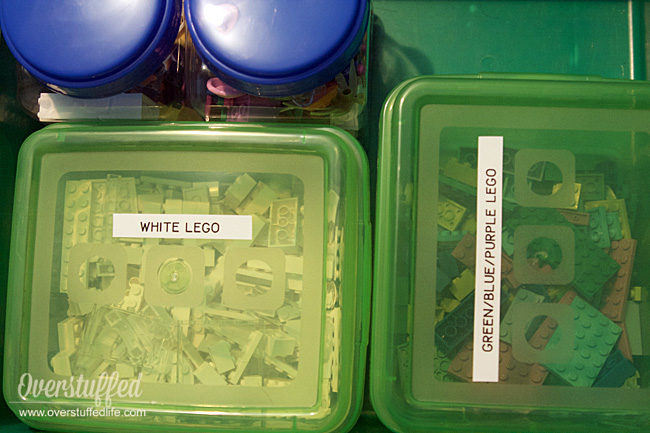 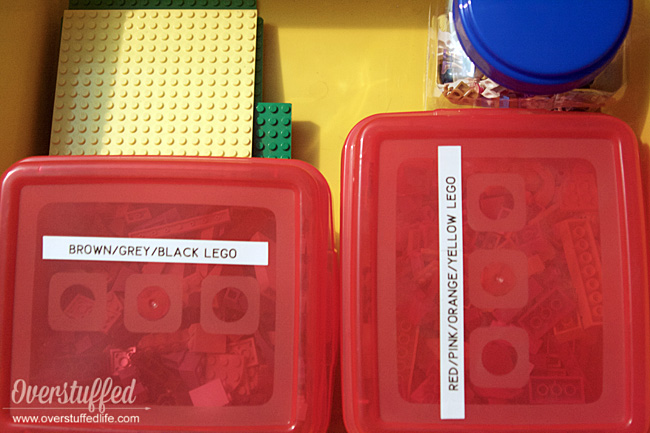 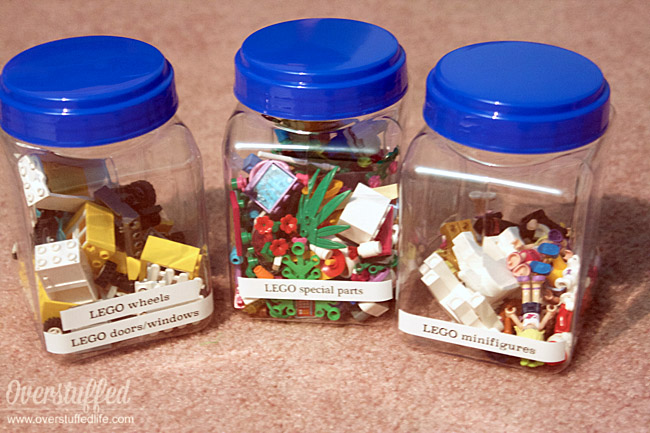 I have found that when I label the bins and containers in the playroom, the likelihood of toys being put away properly is greatly increased! And kids are also much more likely to play with toys that are organized and easily found. So even though it sometimes seem annoying to have to sort through them when you’re finished playing, it’s ultimately worth it for the kids.

This project took Chloe and I about two hours to complete. Depending on how many LEGO you have, and how you choose to sort them, it may be shorter or longer for you! We are just glad to have it finished. 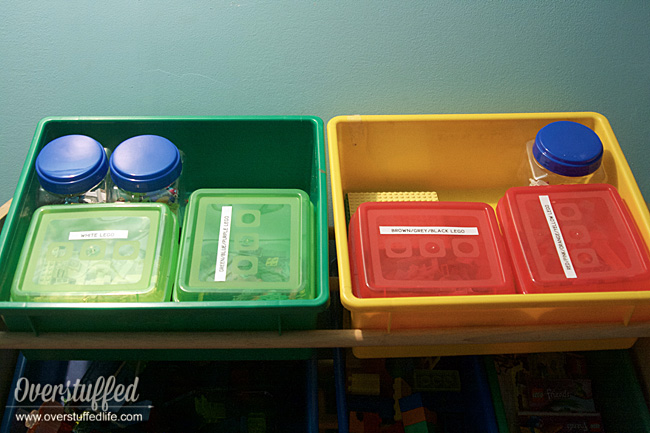 This is what it the completed project looks like—my playroom is too small to get a full photo of the toy bins, but the LEGO have the position of honor on top since they are the favorite toy du jour. I’m always excited to see what Sophia comes up with next!

And now that the LEGO are sorted and organized, she will find it easier to build new creations. I love this book for helping spur that creativity: Awesome LEGO Creations With Bricks You Already Have 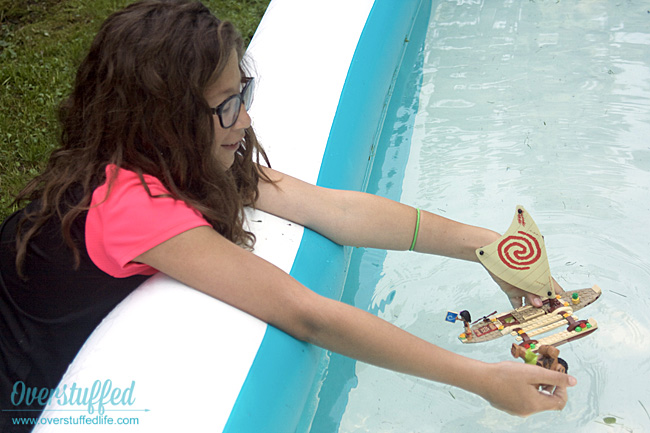