How to make a Fortnite Halloween costume—”The Rook”

Fortnite. This video game is all the rage right now—at least among the middle school set! My 7th grader loves it and can be found playing whenever she can.

I wasn’t sure what to think of it at first, but after watching her play and realizing what a great social connector it is for her, I’m okay with it. As long as her homework and chores are done and her attitude stays good, she’s fine to play for a little while each day. (I use the Circle with Disney to limit and track her time on the game.) 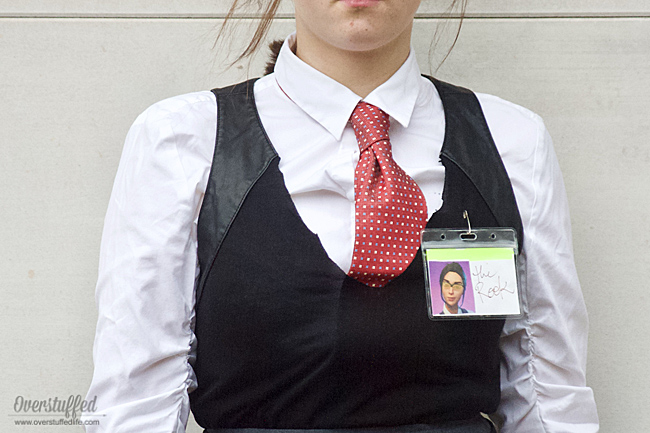 My youngest wants to be a Fortnite skin for Halloween, but hasn’t decided which one yet. However, her older sister had a costume day at the high school for Homecoming week and thought it would be funny to dress up as a Fortnite character even though she’s never actually played the game.

The easiest one for us was “The Rook.” 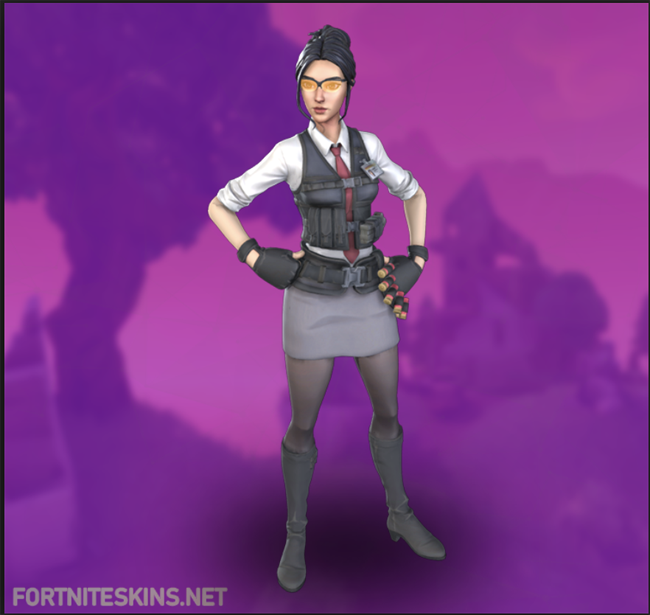 We were able to find everything we needed either on Amazon, at Goodwill, or in our own closets.

While it isn’t an exact costume, everyone knew exactly who she was, so we were glad we didn’t worry too much about perfection here. This costume was extremely simple to put together! 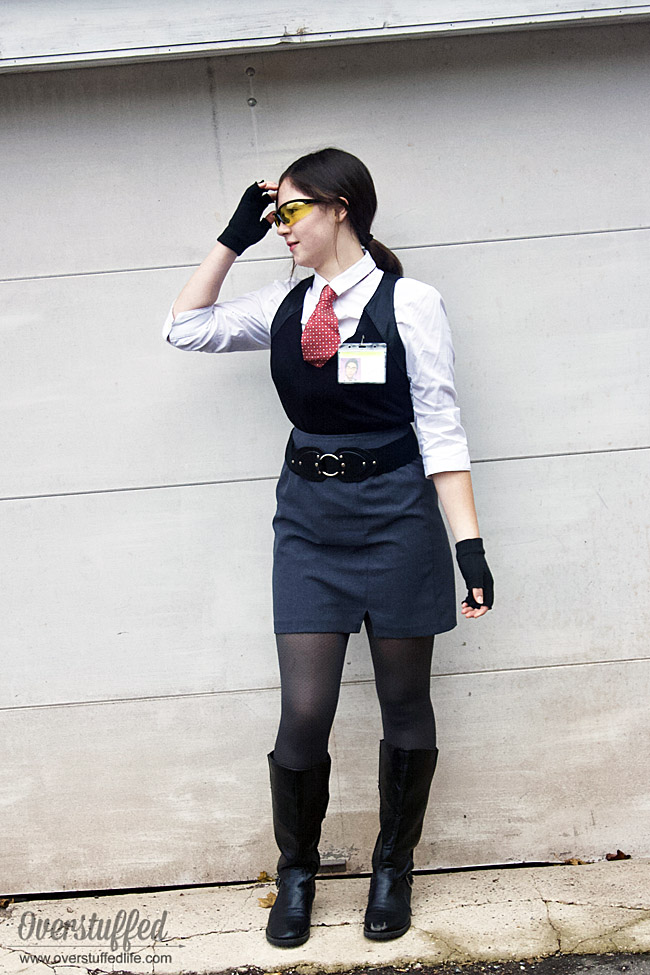 (I’ve included Amazon affiliate links for everything, even if I purchased elsewhere or already had the item—click to view products)

Plastic name tag holder—we had a bunch of these from various events, but they are cheap on Amazon.

Black fingerless motorcycle gloves—we have so many gloves at our house! We just cut the fingertips off a cheap pair, but the motorcycle gloves would be closer to what the actual character wears.

White button down shirt—found in my closet. Bonus that it had 3/4 sleeves already, but long sleeves can easily be rolled up.

Red or burgundy tie—amazingly my husband had zero red ties, so we found one at Goodwill. Sadly, they didn’t have any plain ones, but the small pattern on the one we used was totally fine.

Black tank top or black fishing vest—we used a tank top we found at Goodwill and altered (directions below). The fishing vest is closer to what the actual character wears.

Black belt with big buckle—found in my drawer 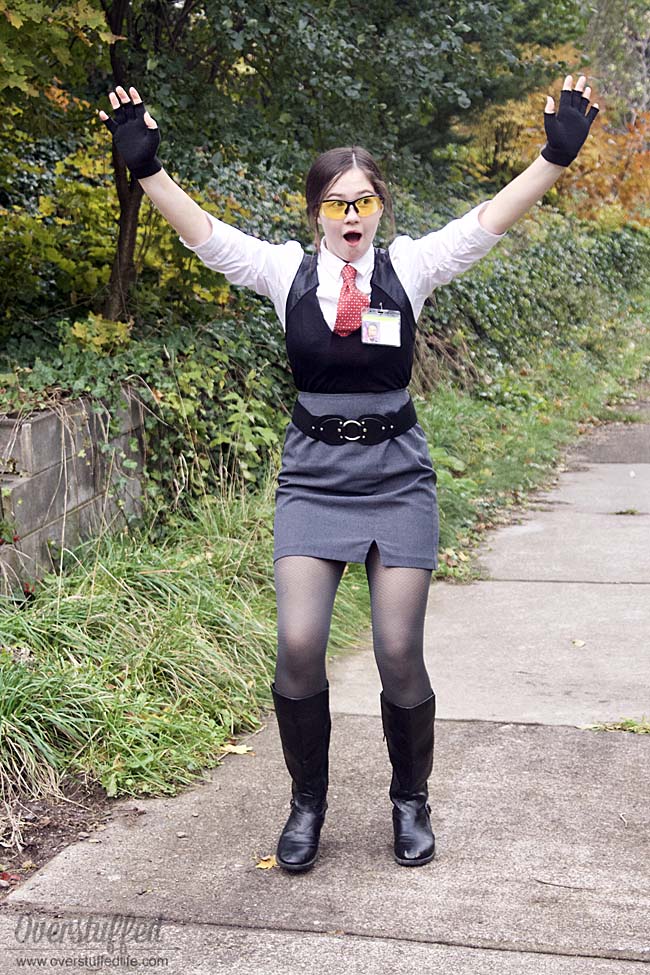 Most of the costume we already had, which is part of what made it so easy for us to make quickly. The purchases we had to make came to about $20, but the gray skirt she will wear again and again because she loves it so I feel like I shouldn’t even count it as part of the total.

How to turn a tank top into the Rook’s vest 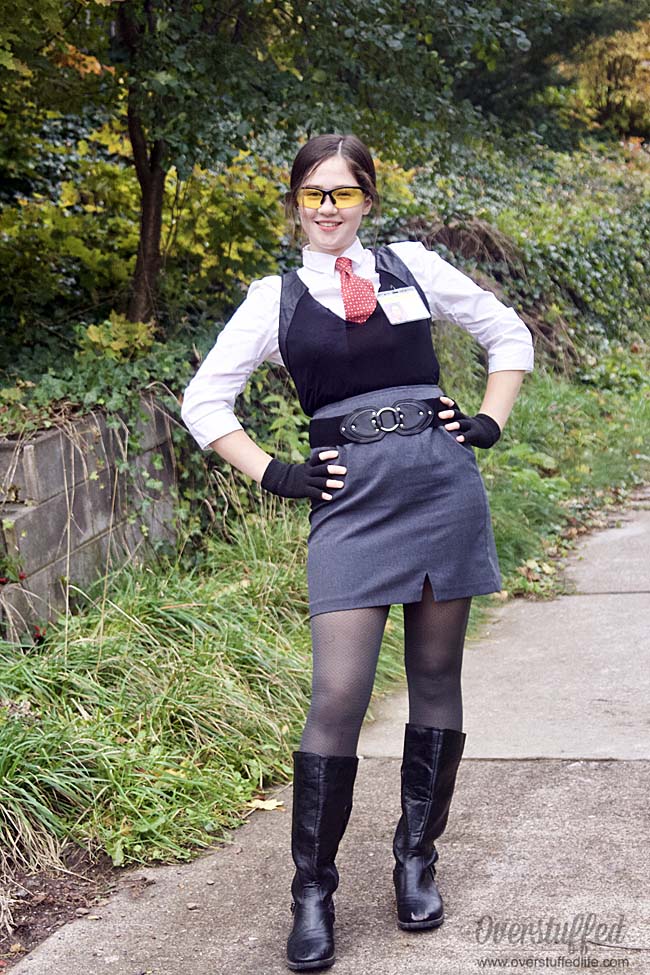 I was surprised how few black vests were at our Goodwill! And all of them were way too big for Chloe. Instead, we found a black tank top that had some fake leather detail on it and decided to go with that.

It had a high round neck, so all we did was cut it into a v-neck and tuck the tie under it. Easy peasy!

How to make the Rook’s name tag 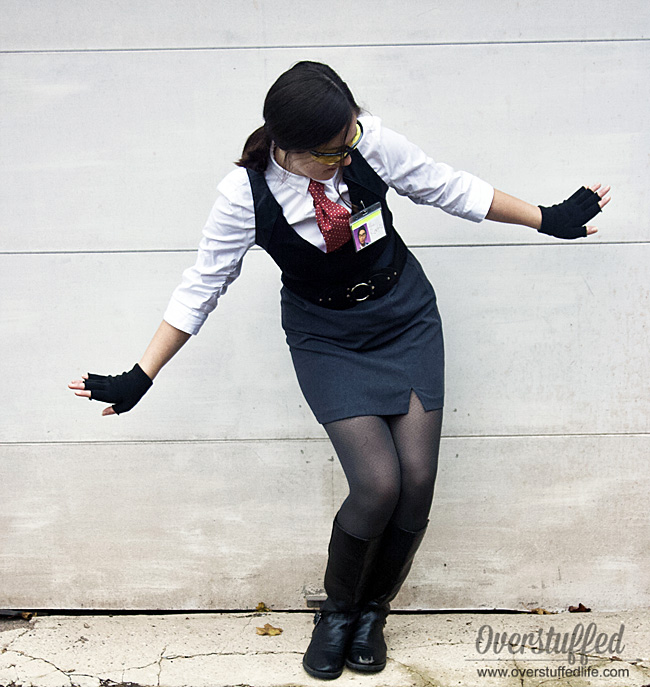 Seriously guys, I spent no time on this at all. I found a photo of The Rook online, printed it out, cut it to fit and glued it to a piece of white card stock. I wrote “The Rook” on it and put yellow highlighter across the top. It’s hard to see exactly what is going on in the real name tag, so this was my best approximation and took less than three minutes to make.

Optional additions to The Rook’s costume

We decided against doing the ammo belt or carrying a gun, mainly because of school rules, but also because I looked around a bit and couldn’t find anything that really worked well. In the end, I really don’t think either are necessary for the costume, but if you want to add them here are some links:

This costume turned out to be a huge hit—and the best part was that it is super easy to make!

The Best Way to Buy Used Cell Phones for Your Teens
Next Post: Everything You Need in Your Cold and Flu Survival Kit