Tomorrow my husband starts getting paychecks again. (Cue the Hallelujah Chorus now!) We’ve managed to scrape by, pay all of our bills and put very little on the credit card. And amazingly enough, we still have money in the bank. An itsy-bitsy, teeny-weeny, yellow-polka-dotted amount of money, but still, it’s there, and it is actual money.

When the summer classes didn’t come through for my husband this summer, I started to feel that God wanted us to learn something different. Well, I think we did just that.  n fact, we learned a lot more than just one lesson. Some were new lessons, others were reviews, so to speak, but all were important. 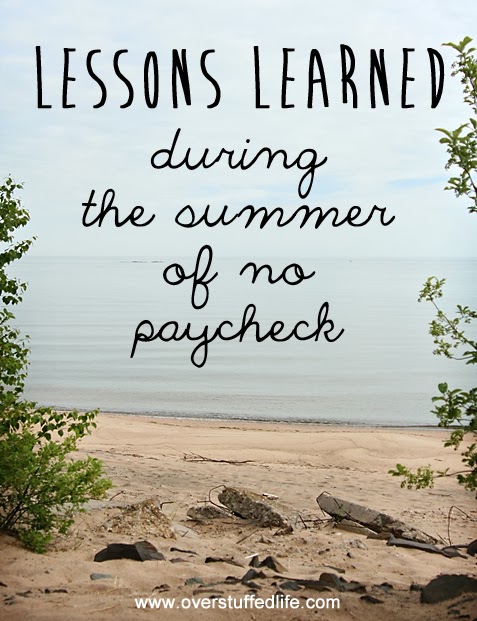 I learned that Heavenly Father always takes care of us

He takes care of us when we are doing our part, and maybe even when we’re not. I’ve already written about ourlittle lawn mower miracle, but we had so many of these types of tender mercies this summer I can’t even remember them all.

We’ve had friends drop by food that would have gone bad while they were on vacation several times when our fridge and pantry were rather Mother Hubbard-ish. We’ve been invited to countless parties and potlucks where our children were able to eat lots of food that we wouldn’t otherwise have been able to provide. All in exchange for a plate of brownies made from food storage.

Our parents have visited and helped to alleviate the burden of groceries and other things during their visits. I’ve even won an uncanny amount of blog giveaways this summer, which meant I didn’t have to buy Sophia a birthday present because I won something for her.

I have had only a handful of vocal students this summer, most of which pay me in cash at the beginning of each lesson. That money was our grocery and incidental money.

Since it’s summer, I couldn’t always count on students being there, so I never really knew what my grocery budget would be like from week to week. Sometimes when I was despairing that we wouldn’t be able to afford this or that because too many students were gone in a week,  I would get a random phone call and have a student to teach just for a couple weeks while they were in town visiting (who does that?) or to help them get ready for a quick audition or something. This happened at least four times.

I’ve even started teaching Romanian lessons to a girl who was in the opera chorus with me because she wants to learn an Eastern European language. And no matter what, I’ve always had enough money for at least a few groceries each week.

I learned that prayers are answered

And they are sometimes answered so immediately that it makes your head spin.

A couple months ago I was going through the finances, trying to figure out how to make everything work, and it wasn’t working. So I bowed my head right then, and I told Heavenly Father that it would be awfully helpful if I could get just one more student. That was all.

I am not even exaggerating when I say the phone rang as soon as I said “amen.” It was an older lady who wanted lessons and told me she’d pay me well. Turns out she wants to sing in her church choir every Sunday and wants me to help her learn the music beforehand. She always pays me for an hour but we’re done long before that (that is to say, she decides when she’s done) and she won’t hear of paying me any less.

I learned that the best things in life really are free

We’ve had one of the best summers ever and have spent very little money on entertainment. We head to the beach, we go letterboxing, we have family movie nights from our own DVD library, we go to the park, we go on walks, we spend time at the library, we go to the free concerts downtown, and we just hang out at home together.

Sure, we’ve spent a bit on gas and a few library fines (why can I never get books turned in on time?) but it’s peanuts compared to what we’ve spent to entertain ourselves in years past.

If not happier. Stuff is cumbersome, and it feels so good to simplify.

It also feels really good to score a wonderful deal on groceries or find something great at a yard sale or Goodwill. And eating out is completely unnecessary. (Except, of course, when it is necessary.)(Which is hardly ever.) We, who ate out at least once a week in times past, have eaten out only a few times this summer. Most of which were during opera performances in other cities.

I learned to be patient

Lots of things that seem like needs really aren’t. Things like haircuts can wait (let’s just say I can wear a ponytail now and Joel had quite the afro going on for a while this summer).

Things that I want for the house, like bedspreads and curtains, can wait. Even paper towels can wait for a few days. We always have rags.

I learned to make do with what I have

When I finished painting the dining room I ended up stealing stuff from all over the house to put the room together. It turned out better than I ever imagined just by stretching my creativity and thinking about what I already had.

Every time a need came up, I tried to be as creative as possible to meet it before I spent any money. I must say, sometimes I amazed even myself!

I learned that we can build up our food storage

By shopping the sales this summer, I was able to stock the pantry and even get quite a bit of food storage going. I’ve always said it’s too hard or too expensive and never really tried to get it much beyond a couple months’ supply.

But if I was able to do what I did this summer, I can certainly do more during the school year. It’s one of those commandments that I have always kind of ignored, but I will be better from now on.

I learned that we need to be a team

The finances have never been something we’re really on the same page about, for many reasons. But this summer has brought us together in that department more than anything else ever has. I’m pretty sure we’re finally on the same page, and we have plans now to get out of debt, increase savings, and for how to generally use our resources.

I learned that when you have money problems, you don’t really have problems

I don’t mean to sound flippant, because it’s not as if we have ever been rolling in the dough, and we’re very aware that it’s hard to stretch a salary further than it’s meant to stretch. I just have really realized this summer that there are so many worse trials out there to be dealing with. Our financial difficulties are nothing in comparison, and I’ll take them.

To those of you dealing with harder stuff, my heart hurts for you and I pray for you daily and think of you often. Your courage and strength are inspiring to me.

Believe it or not, I am very grateful for the last three and a half months and their paycheck-less state. I am a better person for them. But I’m not gonna lie—I am also extremely grateful for payday tomorrow. I’m going to sleep a lot easier knowing how I’m going to pay the mortgage and all those other bills sitting on my desk!

What We Have
Next Post: How to Go Letterboxing

I enjoyed reading everyone's comments and can say AMEN to all of them. Thank you for putting yourself out there and sharing your experience with all of us.
We jokingly say sometimes that "it could be worse" or "atleast we have our health" but I totally agree with your thought- if money problems are our biggest trial, I'll take it. If not being able to eat out or go to Disneyland is my biggest complaint then I've got it pretty good.
Heavenly Father does take care of us and whether in our time or his, as long as we are doing what we are suppose to we can be at peace!
I love you Lara!

Fantastic post, Lara! I am relieved for you that it is over for now and am so happy it went so well. You guys have really learned some fantastic things.

Loved this post! You are such a great example to me! Jared and I loved reading of everything you've learned (I think we learned some of it, too!).

This post is just beautiful. I'm so glad your summer went so well and taught so much. It gives me hope for some upcoming trials I'll be facing.